The Battle of “The Lost World” in Venezuela’s Gran Sabana

Beyond the recent border conflicts over national sovereignty and foreign aid, mineral extraction in the Gran Sabana region of Venezuela is sowing violence against Indigenous peoples. 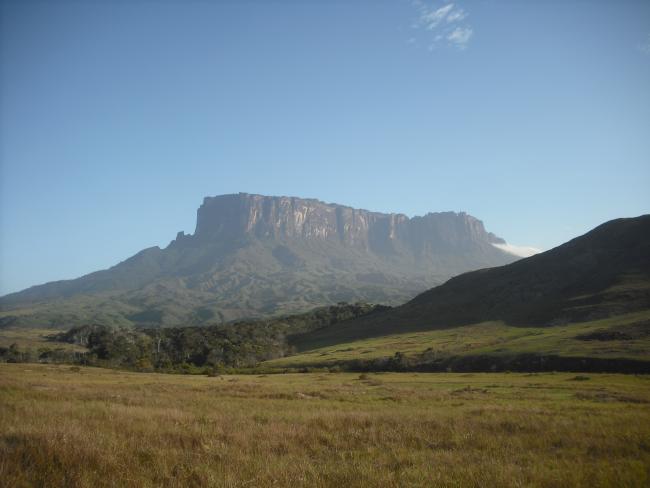 On February 22, the Venezuelan military opened fire on a blockade of the Troncal 10 road in Kumarakapay, an Indigenous Pemon community in Venezuela’s vast Gran Sabana region, immediately killing two protestors and gravely injuring at least six more. Troncal 10 is the only paved road connecting Venezuela to Brazil, and protesters have often used blocking it as a last-resort tactic to demand urgent services or oppose political decisions. The Kumarakapay Pemon had been running an “Indigenous security checkpoint” in their community for over a year, so it was no surprise that they blocked the road that day.

The attacks were striking and brutal—and not the norm for communities of the Gran Sabana, who have historically enjoyed relative autonomy in majority-Pemon territories. Beyond the context of disproportionate use of force in the context of Juan Guaidó’s self-declared interim presidency and the threats to Venezuelan sovereignty, this event reflects an escalation of military abuse and increase in generalized violence around gold and diamond mining in the region.

However, the killing of the Pemon protesters was overshadowed by other events of the day, which marked a peak in the escalating conflict between Nicolás Maduro’s government and supporters of the self-appointed interim president Juan Guaidó, a leader shaped in the ranks of the most radical sectors of the Venezuelan opposition. The immediate situation revolved around the arrival of “humanitarian aid” to the Venezuelan frontiers, a plan instigated by the U.S. government and others that officially recognized Guaidó as president in January. As foreign military forces maneuvered in the Caribbean and the convoys carrying aid approached Venezuela, Maduro’s government deployed additional troops near the borders with Colombia and Brazil, denouncing the aid plan as part of a coup against him, and declaring that national security forces would be firm in maintaining the borders closed. These events constituted another turn of the screw in the regime-change plans that Trump’s administration has been pushing with renewed urgency, generating a delicate conflict that could have easily spiraled into mass violence. Depending on the outcome, it could have also even become the justification for an open foreign military invasion in Venezuela—an option that neither the U.S. government or Guaidó himself have discarded.

The media limelight was on the Venezuela/Colombia frontier, and particularly around Cúcuta, Colombia, where opposition sympathizers organized a mass event called “Venezuelan Aid Live.” This was a concert with a starry frontline of international musicians advocating aid into Venezuela, who supported Guaidó’s aspirations to oust Maduro. In response, the Venezuelan government set up a “Hands off Venezuela” concert on the other side of the border and with a long list of Venezuelan artists in support of national sovereignty. Journalists dubbed those events “the war of the bridges”, and those who still maintain a sense of humor amidst all the Venezuelan drama referred to them “la guerra de las minitecas,” roughly translatable as “the war of the DJs.”

Beyond the musical scripts, the general scenario was obviously tense, and eventually erupted as anti-Maduro protestors gathered on the Colombian side of the border confronted Venezuelan military forces opposing the entrance of the ‘humanitarian’ convoys. A succession of skirmishes took place around the bridges that connect the two nations along that stretch of the border, including protesters burning trucks and a few defections of Venezuelan soldiers. The events left behind victims of yet another episode of politically-motivated violence in the recent political history of the country. But away from those bridges and concerts an even more dramatic battle took place those days in the Gran Sabana—the military opening fire at the Pemon Indigenous checkpoint. 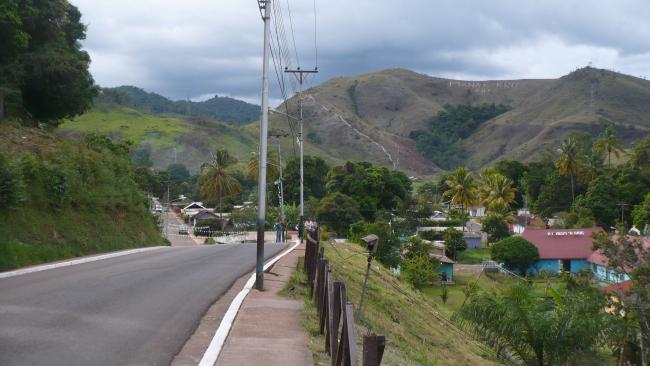 Mining and Resistance in “The Lost World”

The Gran Sabana, a vast Venezuelan region bordering Brazil and Guyana, is often described in terms of otherworldliness. Tour operators commonly promote treks in the region as a visit to “The Lost World,” a reference to the Arthur Conan Doyle novel. Published in 1912, The Lost World was inspired by expeditions to mount Roraima, a famous tepuy, as the Pemon call the table-top mountains scattered around their lands. The region is indeed a marvel, with spectacular landscapes and distinctive social characteristics. But the touristy catchphrase also captures how the Gran Sabana has been constructed in national and foreign collective imaginaries: as a place outside the rhythms of modernity and capital.

Of course, such projections are far from the reality of most inhabitants of the region, as recent events leading to the killing of at least five people during protests surrounding the arrival of “humanitarian aid” to the Brazil-Venezuela border illustrate. This was just the latest instance of an unfortunately expanding record of violence in a region of intensifying conflict.

On the same day as the incidents around the bridge, a group of people allegedly associated with the “Pemon Territorial Guard,” a self-organized Indigenous policing body, had kidnapped members of the Venezuelan military. Such kidnappings have taken place before as a negotiation strategy, and speak to the growing tensions between Pemon miners and the military, including the National Guard, around gold and diamond extraction. The February kidnapping was different, because it targeted soldiers who participated in the military operation to seal the border. But, as in previous occasions, the captors circulated videos showing the members of the security forces in submission. These kidnappings have always been resolved without military victims, after negotiations in which high-ranking members of the army hear out protesters’ demands. But despite this acceptance of negotiated resolutions of conflict, a sense of humiliation and anger has been growing among some members of the military. This history could contextualize the disproportionate use of military force in Kumarakapay.

Yet the primary impetus for conflict in the region indeed stems from gold and diamond mining, which has developed at different scales for at least 150 years. These minerals are abundant in the Gran Sabana, and because of the geological conditions of the region they can often be extracted with relatively cheap equipment—unlike the capital-intensive industry that is needed to extract these minerals in many other parts of the world. These conditions have meant a significant portion of the Indigenous population participates directly in mining, from day laborers to managers.

Though some Pemon disapprove of mining in the Gran Sabana and most acknowledge it is environmentally devastating, many rely on it for their survival and socioeconomic development. There are few other economic alternatives in the region, with agricultural production barely surpassing subsistence levels in most communities, and with tourism insufficient to compensate for the lack of salaried employment. Even during the extraordinary peak in tourism in the region in the past decade, it never provided a plausible mass solution for the economy beyond creating localized tourist enclaves. In the past, working in mining was mostly seen as temporary, but it has gradually become a permanent source of employment and income for some Pemon communities. These communities fear further dispossession—a justified fear given the influx of illegal miners who come from other regions and abroad, as well as an increase in state licenses awarded for mining contracts as gold has become more profitable in recent years. Between 2005 and 2010, gold prices tripled. 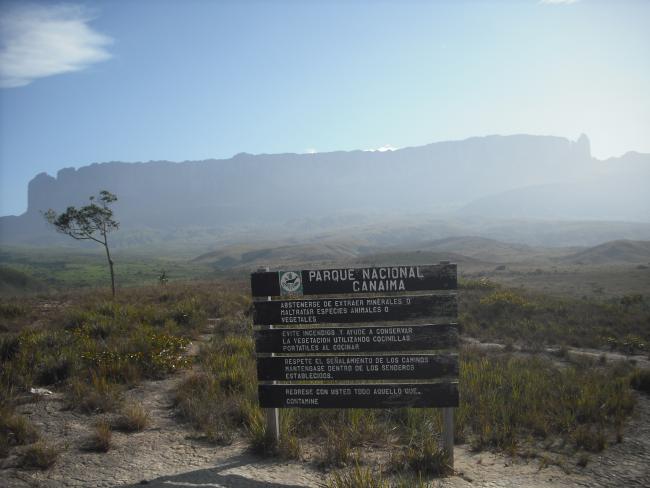 Venezuelan and foreign miners have for many decades exploited parts of the Gran Sabana, sometimes with state-granted licenses but often in illegal sites—and in both cases with devastating social and environmental effects. The Pemon are today determined to protect their land rights from external grabbing, but part of this population also associates this with their own rights of extracting minerals. These Pemon see no other realistic alternatives in the short term, and are not willing to renounce a source of income that allows them to stay in their region—labor migrations of the Pemon have historically led to extreme exploitation, which helps explains why they would prefer to mine on their own land.

Around extractive sites, the mining population have consistently reported facing abuses from military personnel, including being extorted through illegally charged “taxes” for permitting extraction or requesting money when equipment, fuel, or commercial goods are brought into mining areas. These widely recognized extortions underpin previous episodes of kidnapping of military personnel by Pemon groups. In other cases, the communities have responded to interventions of security forces allegedly trying to prevent illegal mining by kidnapping. This was the case in a December 2018 episode in the Canaima area, where the renowned Angel’s Falls are located, when an Indigenous man was killed and the miners kidnapped three members of public security forces in response. The public security forces were eventually released after a meeting in which a local leader told a military officer in front of an assembly of local people that if similar military interventions were to occur, the local population would confront them and would either “kill or be killed.”

Armed self-defense groups have also emerged in some Pemon communities, in some cases publicly declaring their objective of protecting what they consider to be their legitimate extractive rights and in other cases as a way of exercising some control over lands that they see growingly encroached. The case of land invasions in the Pemon communities near Santa Elena, whose population multiplied three-fold only between 2001 and 2011, is a telling example: according to my research, some 20 such invasions have taken place in the last two decades. In seeking to control extraction, these armed groups must confront organized criminal mafias, which already control mining areas north of the Gran Sabana. But they must also confront the military when they try to extort miners and when they try to stop illegal mining ventures, which some Pemon see as legitimate in light of their land rights.

Addressing the particular conditions of mining in the area will be necessary to facilitate any long-term solutions for the intensifying conflicts in “The Lost World,” which will need to seek balanced socioeconomic development for the Indigenous Pemon and other people in the region and, while establishing effective mechanisms to halt all types of illegal mining, domestic or foreign. Such mechanisms are difficult to envision without the support of solid state structures, which are difficult to establish in a deeply destabilized country that currently finds itself in a seemingly permanent state of exception. Very sadly, amid the expanding internal crisis and with the growing external pressures on Venezuelan sovereignty, we can only predict that the problems of the Pemon and other inhabitants of “The Lost World” will not find a positive resolution in the near future.

Luis Angosto-Ferrández is a senior lecturer in Anthropology and Latin American Studies at the University of Sydney. He is author of Venezuela Reframed: Bolivarianism, Indigenous Peoples and Socialisms of the Twenty First Century, editor of Democracy, Revolution and Geopolitics in Latin America: Venezuela and the International Politics of Discontent and co-editor of The Politics of Identity in Latin American Censuses.