Contrasting Cases of Energy Dependence: Venezuela and Trinidad and Tobago

Trinidad and Tobago used to be as dependent on oil as Venezuela. So why hasn’t its economy suffered similar levels of crisis since oil prices began to decline? 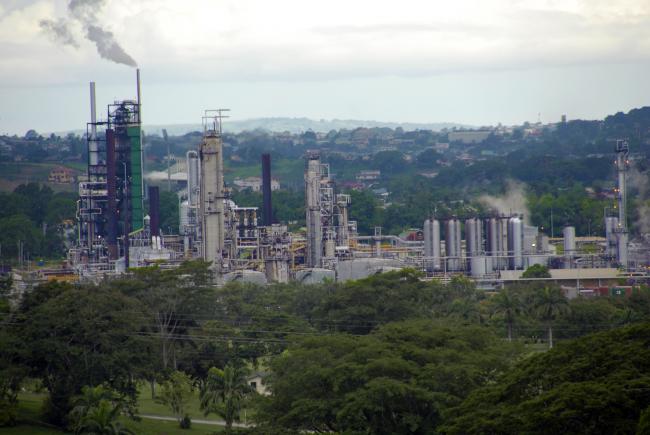 Away from the economic and political calamity in Venezuela, just seven miles off the coast lies another resource-dependent country whose economy stands in stark contrast to Venezuela. Despite an almost identical level of dependence on oil as neighboring Venezuela throughout the 1970s and 1980s, in just 30 years, Trinidad and Tobago has propelled itself into high income country status. Highways have been expanded to accommodate the exponential growth in the number of cars on the nation’s roads, and shopping malls, restaurants, and bars keep popping up for eagerly spending Trinbagonian customers.

In stark contrast to Venezuela, despite the recent plunge in oil prices, most of the country’s 1.3 million citizens continue to enjoy high human development in terms of life expectancy, income, and education. In fact, in response to the Venezuelan economic crisis, Trinidad and Tobago has supplied its oil-rich neighbor with millions of dollars in exports of food and basic goods, and become home to tens of thousands of Venezuelan refugees. Indeed, as a proportion of its population, Trinidad and Tobago has received more Venezuelan refugees than any other country. What can account for this massive divergence since the recent drops in global oil prices? Trinidad and Tobago was better able to weather the storm for three main reasons: first, its government has invested in a more energy-diversified economy; second, it has shied away from military spending; and finally, because it has escaped the wrath of an interventionist U.S. foreign policy specifically designed to damage its economy.

To understand this contrast more closely, it is useful to review the current situation facing Venezuela. Today, food and medicine are in short supply, and what little exists is often priced out of range for poor citizens. This has all taken a considerable toll on the well-being of Venezuelan citizens. In 2017, for instance, citizens reported losing 24 pounds on average, and diseases such as measles, diphtheria, and even polio have reemerged within the country. Citizens often plead on social media for basic medicines such as antibiotics, and, over the past few years, shortages of food have become increasingly evident.

Media outlets around the world and Venezuelans themselves have wondered: how it is that the country with the most proven oil reserves in the world could face such a dire and desperate economic situation? This is a question that has plagued most working class Venezuelans since far before the days of Chavismo. Yet today, millions of Venezuelans have now left the country for nearly any other country they can relocate, and, with the U.S. recently imposing sanctions on the Venezuelan oil industry, the situation only bodes to worsen.

Much ink has been spilled on the resource curse, or Dutch Disease, which often occurs in countries that possess large quantities of energy resources such as petroleum and natural gas. As a result, energy-exporting countries like Venezuela and others have often directed their attention to maintaining and developing their energy extraction capacities. In doing so, they have neglected the development of domestic industry and other exporting industries that could diversify and bolster the economy.

These situations are of course due to many factors, such as the fact that when a country’s currency rises—often due to high levels of foreign exchange accrued from energy exports—it becomes cheaper to import goods than to produce them domestically for consumption. This generates a highly volatile situation, because when a country depends on just one or two resources to generate state capital, its foreign exchange earnings will be at risk if the value of either of these commodities decreases.

In the instance of Venezuela, oil prices remained high under Hugo Chávez—for many years at over $100 per barrel—allowing his government to generously finance social programs, provide economic support and subsidized oil to regional allies, and enhance the livelihoods of many poor Venezuelans. As a result, Chávez received widespread approval, particularly from Venezuela’s popular classes, and continually succeeded at the ballot box in internationally- and domestically-monitored elections. As in previous Venezuelan administrations, corruption remained a serious issue, but enough funding found its way into social programs that the country experienced much social progress. The United Nations even recognized Venezuela as having the most economically equal distribution of income within Latin America in 2010.

Although Chávez often paid lip service to diversifying the economy, his government and the subsequent government under Maduro were just as dependent on petroleum as previous Venezuelan administrations. And since oil prices began to dramatically plummet in 2013 under President Nicolás Maduro, the Venezuelan economy has experienced serious economic shocks, as described above.

Trinidad and Tobago has like Venezuela historically relied upon energy exports for foreign exchange. So how has it ultimately evaded the calamitous situation now experienced by Venezuela, despite facing many of the same structural challenges?

The Contrasting Case of Trinidad and Tobago

In Trinidad and Tobago, natural resource receipts provide much needed income to support the public sector, the largest source of employment in the country, as well as large infrastructure projects. Consistent with the Dutch Disease, the agricultural industry has played a small role in exports, employment, and the economy. And while in Venezuela, many might want to blame Chávez’s and Maduro’s “excessive social spending,” or “socialism,” as the source of Venezuela’s economic woes, Trinidad and Tobago’s oil money also funds extensive healthcare, education, and social programs that benefit citizens.

In the wake of depressed oil prices, the country has turned to cutting education spending, shutting down companies that depended on government funding, laying off workers, and increasingly offering temporary/precarious positions over permanent jobs. And, like Venezuela, corruption in Trinidad and Tobago is rife. Trinbagonians have seen millions of dollars siphoned into politicians’ pockets and expended on wasteful and dead-end vote-seeking projects.

Still, despite these similarities with Venezuela, the 2008 and 2014-2017 crashes in oil prices did not have nearly the impact on Trinbagonian citizens as it did on Venezuelans. Though successive Prime Ministers have pleaded with Trinbagonians to “tighten their belts,” they have still maintained comparably more stable incomes and positive health and education outcomes. While undernourishment rates in both countries hovered around six percent in 2013, in Trinidad and Tobago this number dropped to five percent in 2016, while it jumped to 12 percent for Venezuelans.

Trinidad and Tobago was able to avoid economic collapse because its economy is, in fact, far less dependent on crude oil as it was in the 1960s to 1980s. Its governments invested windfalls from the 1970s oil booms into turning this small island economy into a global juggernaut in natural gas and petrochemical production. In fact, Trinidad and Tobago today, exports proportionally more liquefied natural gas than oil, making it more gas-dependent than oil-dependent. It became the world’s leading exporter of liquefied natural gas to the U.S. And with gas as feedstock for petrochemical industries, it is also the world’s leading exporter of ammonia and second largest exporter of methanol.

Undoubtedly, reliance on natural gas rather than oil means that economic performance is still tied to the vagaries of global gas prices and demand for gas and gas-based products—not to mention its environmental implications. However, the fact that Trinidad and Tobago was not reliant solely on crude oil exports for the bulk of its foreign exchange enabled the country to escape economic collapse with the plunge in oil prices.

Third, Venezuela has had to channel precious foreign exchange toward servicing its international debt, a situation not currently facing Trinidad and Tobago. Trinidad and Tobago’s external debt burden as a proportion of GDP has indeed steadily increased in the last five years, but remains four times lower than Venezuela’s debt. Trinidad and Tobago’s Heritage and Stabilization Fund—established in 2000 as a savings fund to stabilize the economy in case of downturns in energy prices and to invest in diversification—provides an important buffer for the economy. But the Venezuelan government has not created such mechanisms that would allow for stabilization in such events. In addition, misappropriated funds in Venezuela could have effectively been directed towards a stabilization fund that might have assisted the country amid the plummet of commodity prices.

Lastly, Trinidad and Tobago has not had to contend with antagonistic U.S. foreign policy efforts in the same way as Venezuela. While labor and social movements in Trinidad and Tobago in the 1960s and 1970s successfully pushed the government to reduce foreign domination of the economy, increase local ownership and control, and advance redistribution and class and racial equity, the government itself remained occupied by more conservative, pro-capitalist, and neoliberal officials. As such, the country has not been perceived as a threat to U.S. economic and national security interests. In response to the Venezuelan government’s socialist and anti-imperialist stance, however, the U.S. has implemented a range of sanctions aimed at weakening the Chávez and now Maduro governments. In the latest instances, U.S. sanctions have prevented Venezuela from renegotiating its foreign debt and, more importantly, banned profits from Citgo oil sales in the U.S. from going to the Venezuelan government. This has effectively starved Venezuela of a major source of funding and foreign exchange. These factors are useful in understanding the similar contexts—but contrasting outcomes—in both nations.

These countries are not similar simply because of their resources or their proximity, and they enjoy a strong relationship. Trinidad and Tobago, as part of the official position of the Caribbean Community (CARICOM) regional group, has reaffirmed its support for non-interference and non-interventionist methods of dealing with the political-economic crisis in Venezuela. In what suspiciously seems to be an attempt to split a vote, Trinidad and Tobago’s Prime Minister Keith Rowley was not invited to a recent meeting Trump called with Caribbean leaders for discussions about Venezuela. Still, the number of Venezuelans in Trinidad and Tobago’s detention centers is steadily increasing, and it remains very difficult for Venezuelan migrants living in Trinidad and Tobago to obtain work permits and attend schools, forcing them in some cases into sex work, child labor, and gender-based violence. But Trinbagonians would do well to recognize that they are not immune from the current afflictions affecting its neighbor. With gas dependence making for a fickle economic base, Venezuela’s experience could serve as a cautionary tale to Trinidad and Tobago.

Zophia Edwards is an Assistant Professor of Sociology at Providence College. Her research focuses on the impacts of colonialism and multiracial labor movements on development in resource-rich countries, particularly Trinidad and Tobago.

Timothy M. Gill is an Assistant Professor of Sociology at the University of North Carolina at Wilmington. His research focuses on U.S. foreign policy in Venezuela, particularly U.S. democracy assistance programs.