Washington Doubles Down on its Military Intervention Script in Venezuela

Since the Venezuelan opposition again failed to oust Maduro, extreme elements in Caracas and Washington are increasingly agitating for U.S. military intervention. 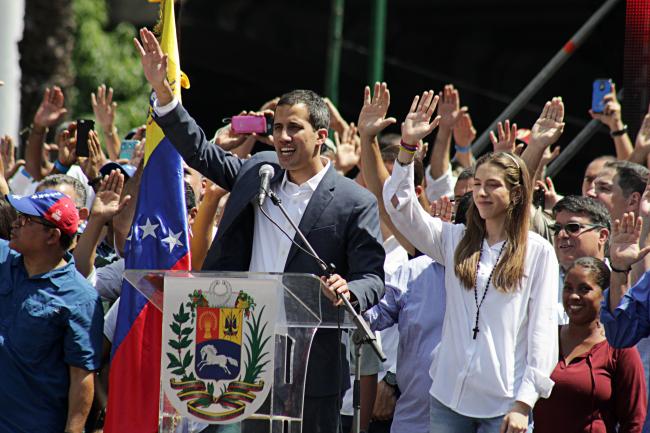 “These [Trump administration] guys are so desperate for a win—and with so much testosterone in their veins, I am really worried they are going to do something really stupid.”

No, this isn't about Iran. That was Fulton Armstrong, a former senior Latin American analyst with the CIA and currently faculty member at American University, assessing the Trump administration’s approach to Venezuela in a May 3 article in The Guardian.

With the dust now settled after the recent failed coup in Venezuela, Washington's high hopes of regime change “from within” have not materialized. For the last few months, U.S. strategy in Venezuela has hitched its cart to Juan Guaidó, the self-proclaimed “president” of Venezuela. His political destiny has depended on U.S. strategy, and vice versa. With Venezuela's opposition and their newest leader losing force, and U.S. President Trump showing signs of frustration, hardline elements are more emboldened.

On May 9, Craig Faller, head of U.S. Southern Command (SOUTHCOM) tweeted that he was awaiting an invitation from Guaidó to discuss further cooperation. Two days later, Washington’s “man in Caracas” instructed his representative in Washington to meet with U.S. SOUTHCOM, requesting help with “strategic planning.” The meeting on May 20 produced seemingly little, but this back-and-forth is a dangerous precedent, as fringe elements in Washington and Caracas are increasingly defining their policy approach in military terms.

Though Guaidó has become a major component of U.S. strategy in Venezuela, his promises have proven greater than his capabilities and actual political sway in the country. Once again, the highly-touted split in the Venezuelan military did not become reality during the coup he led on April 30. Perhaps stating the obvious, Guaidó told the Washington Post on May 4 that the opposition had overestimated military support for the coup attempt.

What was once presented to Trump as a quick-fix regime change has proven much more difficult. Recently calling Venezuelan President Nicolás Maduro a "tough cookie", the U.S. president has expressed frustration, even questioning his own administration’s strategy. This has provoked yet another return to the drawing board in Washington, in a year filled with roller-coaster moments in Venezuela.

On January 23, Venezuelans in Miami were “jubilant” as Guaidó swore himself in as self-declared president in front of tens of thousands of opposition supporters. The second-string politician was then catapulted into international stardom as the leader of a U.S.-backed attempted soft-coup, Washington’s new modality of changing unfriendly Latin American governments. U.S. allies across Latin America immediately backed Guaidó, with most U.S. allies in Europe following suit, albeit with somewhat more caution. Most of the rest of the countries of the world continue supporting the current Venezuelan government.

With Washington's no-turning-back support, at a February 12 march Guaidó announced that humanitarian aid would enter the country "one way or another." In a made for TV public relations spectacle, the star-studded rock concert on the Colombian-Venezuelan border on February 23 was the would-be point of entry for the Trojan Horse of U.S. “humanitarian aid.” But that aid wasn’t to be, as Venezuela didn’t permit such a clear violation of their national sovereignty.

With members of Trump's cabinet in photo-ops alongside the highly politicized humanitarian aid efforts, not to mention visits across Latin America to discuss Venezuela, there has been clear coordination between Washington and the Venezuelan opposition pushing to unseat Maduro.

Pots and pans banged loudly in opposition strongholds in Caracas when blackouts spread across the city in March, but regime change plotters were beginning to acknowledge that there was "more needed" to continue momentum. The April 30 attempted military coup would be a make-or-break moment.

Guaidó had billed the opposition march the next day on May 1 as "the largest march in the history of the country." However, fewer showed up compared to his earlier rallies. Independent journalist Michael Fox reported from the scene that “a block away it was empty” saying it was “nothing in comparison” to earlier marches. (His reporting also helped clarify that that the “takeover” on the morning of the coup was of an overpass near a military base, and not the actual military base, as CNN and the New York Times had claimed.)

Guaidó called for a post-coup general strike that also fell flat, with storefronts across Caracas open and no reports on participation numbers.

Again, on May 11 international observers described the “low turnout” at a march to support Guaidó and the National Assembly, with between and 1,000 and 2,000 participants—a "far cry" from the opposition's street-heat earlier this year. According to the New York Times, the coup attempt left the Venezuelan opposition “weaker than before." The Venezuelan opposition has not called any further marches.

With a worn out and worn down Venezuelan opposition and a general sense of Guaidó buyer’s remorse, Washington doubled down on its aggressive, unilateral strategy. Despite the failed coup, or perhaps because of it, members of the Trump administration have been ratcheting up the rhetoric. The military option has been mentioned more frequently, although Trump has suggested that perhaps members of his cabinet are overplaying their hand.

Trump officials seem to be on a crusade to find new legitimate-enough justification for a U.S. military adventure. With Trump's policy of family separation and caging of immigrant children in the U.S., its “humanitarian concern” is entirely without merit.

The groundwork for making such justifications was laid back in 2015, when the Obama administration passed a presidential decree declaring the South American nation an "unusual and extraordinary threat" to U.S. national security. This move opened the legal, political and military door much further, allowing hardline elements in Washington to maneuver more with greater legitimacy. Whether the justification du-jour is “national security”, democracy-promotion, humanitarian aid, or other, the legal and political precedent was in place for harsh sanctions and direct military involvement.

Not surprisingly, radical elements of the Trump Administration have taken advantage of this, with intensified talk and increasing mentions of the “military option.” Secretary of State Mike Pompeo has said, “Military action is possible. If that's what's required, that's what the United States will do.” U.S. National Security Advisor John Bolton has also said military action in Venezuela is “possible.”

Almost every member of Trump's cabinet has tried to paint Venezuela as something of a beachhead in Latin America for U.S. government adversaries, from Russia and China to Cuba and Iran. Bolton recently stated that the Monroe Doctrine is “alive and well,” embracing the offensive neo-colonial role of the U.S. in Latin America. Pompeo and Bolton have shown “concern” for threats to Venezuelan sovereignty due to Chinese investment or the Russians taking over a country in the Western Hemisphere.

The “all the options on the table” mantra doesn't mean consensus on all options. The Bolton-Pompeo extremist tendency, bolstered by the U.S. SOUTHCOM has recently clashed even with the Pentagon. Trump has mentioned in jest that Bolton wants to get him "into a war" with Venezuela. Trump has felt as though Bolton and Pompeo are getting "way out ahead of themselves" as well when it comes to Iran. He has also said that Putin is "not looking at all to get involved in Venezuela."

A Twist in the Plot

In addition to the U.S. SOUTHCOM talks, Guaidó has begrudgingly agreed to negotiations in Norway between his representatives and a Venezuelan government envoy, aimed at a diplomatic defusing. With his street support at home drying up and in Washington’s doghouse, Guaidó has been trying to keep his political boat afloat elsewhere. The talks in Norway would seem to be the only process that actually brings together the Venezuelan government and the Venezuelan opposition, leaving Washington out in the cold.

There is also Russia. A Venezuelan ally, Russia has been very critical of Washington's role. Paradoxically, a critical Putin is one of the few people that would seem to have Trump's ear, and could be a determining factor in helping put the brakes on the Washington hardliners.

Does Cuba have a part to play? The Lima Group, an organization of U.S.-allied countries in Latin America, interestingly suggested the Venezuelan ally as a possible mediator. While Havana is open to mediating talks, the suggestion runs contrary to Washington's increasing hostility towards Cuba.

Back in Washington, as the few fringe elements continue pounding their war drums, with many questions remaining.

Will the U.S. government recognize and respect negotiations between Venezuelans in Norway, perhaps the negotiated option that comes closest to respecting Venezuelan sovereignty? Or will John Bolton, Mike Pompeo, the U.S. SOUTHCOM, and the small group of extremists in the Trump administration sway the decision-making? In a recent interview, the head of the U.S. SOUTHCOM, Craig Faller, said his troops were "on the balls of their feet." Bolton responded: "That's the attitude we need." So far, the Trump administration, just like Obama before him, has been drastically out of touch, continuing the Monroe Doctrine legacy, as Bolton so clearly stated.

While the most radical tendencies in Washington and Caracas flirt with a military option, the vast majority of Venezuelans don't support a U.S. military intervention in their country.

Reinaldo Iturriza, a researcher at Venezuela´s National Center for Historical Studies, reflects on who is defining U.S. policy right now: “When Trump is in meetings with the members of his cabinet most active on Venezuela…when a character such as Trump needs to caution these people, that they should stop talking publicly about military intervention…it is very hard to be to the right of Trump. These are the people that are talking about Venezuela these days.”

Patrick Leet is an independent journalist and professor in the Political Studies program at the Bolivarian University of Venezuela.