The Audacity and Calculations of Cristina Kirchner

Cristina Kirchner’s decision to run for vice president has rocked the Argentinian political landscape and threatens to throw Macrismo off course. 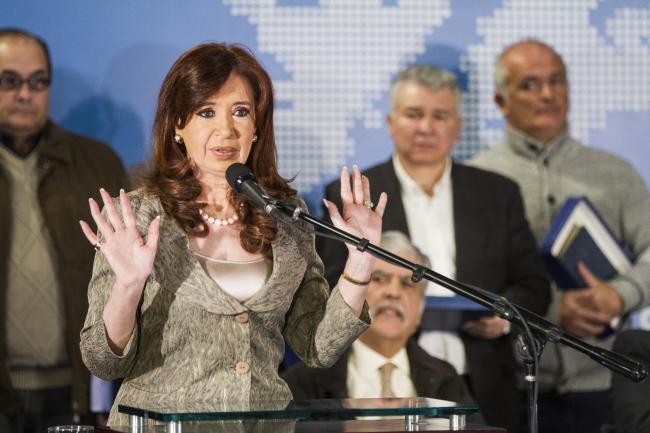 If there is one thing Cristina Fernández de Kirchner and Kirchnerismo in general never lacked, it is political audacity and initiative—whether in power or out of it, whether forming coalitions or waging “culture wars,” whether airing daily, all-channel broadcasts throughout the nation or holding long silences. The latest news is that Cristina Fernández gave up a presidential bid to support Alberto Fernández’s candidacy, reserving the vice presidency for herself. Alberto Fernández served as Néstor Kirchner’s Chief of Staff, followed by 10 years of distance from former president Cristina Fernández, whom he harshly criticized. Now, he has again become her trusted advisor.

The announcement was met with surprise from all quarters, even among those who will swear “they knew it all along.” It was the partial and momentary culmination of recent weeks in which Cristina Fernández stepped back into the political spotlight after long months of prudent silence that were only broken by a video in which she condemned the harassment of her daughter, Florencia Kirchner, and revealed the illness keeping her in virtual (self-imposed) exile in Cuba. Her return to center stage, as on other occasions, was a classic move on her part, but with a novel enough twist to throw off politicians and political analysts alike. It was a classic move because Cristina Fernández resumed her position as the person with the ultimate and definitive say—and legitimately so—about the space in which she moves: what was framed as a “stepping aside” is also an unequivocal and un-appealable decision. More than a few of her opponents remarked with feigned irony, and more unease than scorn, that it is the first time in history that a vice president has nominated her presidential candidate.

During recent weeks, the former president has displayed the full repertoire of her political genius, particularly her restraint and prudence. At the beginning of the month, the publication and launch of her book Sinceramente [Sincerely], put her back in touch, though via an unusualmedium, with the masses who sing her praises and demand her return. The tone of her speech, at once wisely conciliatory and unyielding (“I think neutrality is best left to the Swiss”), struck a contrast to the enthusiasm of the gathering that cried out for its leader with fervor and hope, awaiting the announcement of a run for president that did not and would not come. What was evident—though it now sounds like an exercise in after-the-fact reasoning and a false claim of foresight—was the ascendancy of Alberto Fernández, the outcast and even “traitor,” a testament to a Kirchnerismo willing to forget past offenses in pursuit of a higher goal.

The counterpoint to the reunion of the leader with her zealous followers—which calls to mind, if distantly, those packed plazas that were a fixture of the entire era of Kirchnerismo— was the announcement. Although a contrast, this decision too is a distinctive trait of Kirchnerismo: imperial and unexpected decisions sealed tight against leaks to the press. The political decisions of Kirchnerismo—in other words, of Cristina—especially regarding elections, have always been at a remove from the temptations of intra-party democracy and from the tyranny of the polls. She is a politician who marches to her own beat, and who deals in intuitions and loyalties in a guerilla war against the plot successfully executed over the last few years by Macri’s Chief of Staff Marcos Peña and Ecuadorian guru Jaime Durán Barba. Her answer to the current government’s algorithmic democracy and perpetual scrutiny is a repertoire of (good) old politics of intrigue and moves calculated to shock.

Who is Alberto Fernández? What does his nomination mean? What might be its impact? There are many questions and, at this time, hasty and definitive answers seem ill-advised. Once part of the political apparatus of the former economic minister Domingo Cavallo, Alberto Fernández was a key figure in the rise to power and government of Néstor Kirchner, but also one of the most resounding departures from the Cristina Fernández administration after the “farm crisis” in 2008.

In the intervening years, he continued to work in different spaces within alternative Peronism, with more centrist positions and a tone that spared Kirchnerismo no criticism. He was one of many “granted amnesty” by Cristina Fernández during her efforts to rebuild her political space, but he proved different from the rest. Little by little, his figure, though always in the background, gained centrality in this new stage of Kirchnerismo and, in particular, in the former president’s leadership. The launch of Sinceremente at the Buenos Aires Book Fair made it abundantly clear to anyone unconvinced that after years of ostracism, that Alberto Fernández was back in the thick of the decision-making and again part of the former president’s closest circle, along with her son Máximo Kirchner and the Kirchnerista former minister of economy Axel Kicillof. His ascent comes at the expense of other politicians who have proven both their unwavering loyalty and staggering political incompetence: “the former president never found anyone who could replace her, whether as part of her political strategy, as a spokesperson, or as a politician who can take whatever is thrown at them,” wrote Diego Genoud.

Alberto Fernández’s nomination serves, in principle, to soften the former president’s image as a polarizing force driving the famous “rift” that has widened in recent years, especially since Macri’s Cambiemos coalition came to power. The candidate’s role is to file off the roughest edges of Kirchnerismo, as he gives Cristina Fernández the chance to show a certain openness and willingness to let go of power. The move tempers the accusation of arrogance, the main charge leveled against the former president by Alberto Fernández himself when he opposed her, and meanwhile Mauricio Macri shows his most inflexible side by rejecting, at least for now, any chance of withdrawing his candidacy to make way for Governor María Eugenia Vidal: the so-called “Plan V” backed by part of the establishment.

The decision has more to it than meets the eye, beyond the bewilderment it caused. In general terms, the Fernández-Fernández ticket, as it has already been popularized on social media, is the first to be officially announced. This puts the ball in the court of opponents and potential challengers, who for the moment are long on surprise and short on decisions. For most analysts, the choice of Alberto Fernández, even over other possible candidates for pulling off the same maneuver, is a direct message to certain sectors of Peronism not aligned with Kirchnerismo, organized as Alternativa Federal (Federal Alternative) and, above all, to the so-called “red circle”—the economic and financial power-brokers.

The presidential ticket thus gives substance to the signs of moderation seen in Cristina Fernández’s discourse during her latest public appearances. Alberto Fernández’s candidacy is full of signs, though not actual votes. It is a move made more with an eye toward a possible future administration—anticipated to be difficult on a number of levels, but especially economically—and a runoff election. Not to be underestimated is the fact that the newly-announced candidate has no accusations of corruption against him, one of the weakest flanks of the former president, who will face court proceedings in the middle of her campaign.

It seems premature to decide (though this hasn’t stopped the analysts from doing so) whether this announcement signifies the end of the “rift,”or rather a deepening of it, albeit a shift from a defensive polarization marked by retreat to an offensive one in search of new electoral hunting grounds, as Andrés Malamud has written. It will even take time to measure his possible electoral impact in the polls. The most immediate effect will be seen in his potential adversaries or allies, who in upcoming weeks will have to decide what to do.

It is an open playing field, but the players have begun to take their positions. The incumbent Cambiemos alliance based its survival on raising the specter of the return of Kirchnerismo. And this worked until its own failures began eating away at the efficacy of that message. The coalition has suffered a series of electoral defeats at the provincial level that merely fuel the uncertainty, even with respect to Macri’s own candidacy. Kirchnerismo, on the other hand, after a spate of setbacks, has begun to nurture its own version of polarization, emphasizing the current administration’s economic failure and how its own supporters are jumping ship. The new presidential ticket seems to indicate this, but it is too soon to gauge its effects. Lastly, the third “anti-rift” space—supported by socialists, dissident radicals and a minority within Peronsim, and of uncertain size and power—was endorsed by former economic minister Roberto Lavagna, one of the authors of the post-2011 recovery, who is holding off on announcing his campaign but ceaselessly advancing his plan to win over Cambiemos voters and allies. At this early stage the outcome is still up in the air, but the strategy of combining audacity and calculation—traits Beatriz Sarlo once attributed to Néstor Kirchner—seems to be the right one, given the effect Cristina Fernández’s announcement had.

“Anyone but Macri” began gaining momentum as the slogan for an opposition victory, with the third space included in the equation. Alberto Fernández took on the responsibility of attempting to put an end to the brand of Kirchnerismo that is as “intense” as it is self-defeating, to deal the final blow to the faltering Cambiemos administration. Alberto Fernández wants to be that “anyone.” As always, the voters will have the last word.

This piece was originally printed in Spanish in Nueva Sociedad. It was translated into English by Collin Stewart.