On the Front Lines of Trump's Immigration War in the U.S. Heartland

Worthington, Minnesota, home to a major meatpacking plant with a majority immigrant workforce, is a microcosm of an expanding border regime where a power struggle unfolds between longtime residents and newcomers. 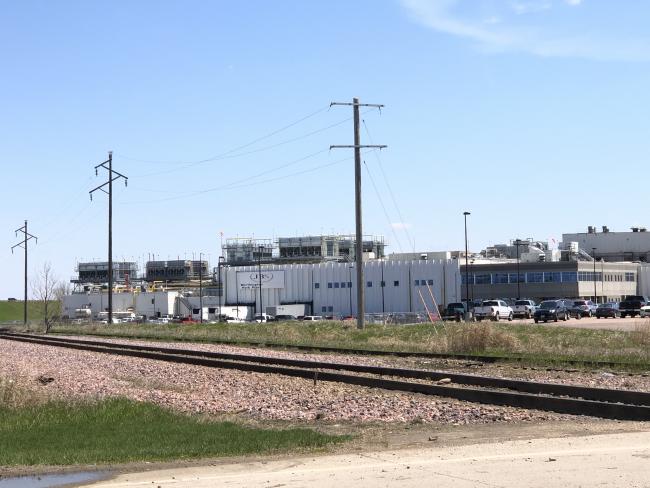 For immigrants in Worthington, Minnesota, a town of 13,000 near the Iowa border, every day is daunting. “Every day you wake up. Good for you. You get to go home, see your family again, even better,” says Jessica Lee Velasco, a lead organizer in Worthington with Unidos Minnesota. “And that's sad. That's not a way to live.”

Lee Velasco’s organization, Unidos Minnesota, has played a large role in pushing for driver’s licenses for undocumented immigrants in Minnesota, alongside a coalition of Democrats, some business and farm groups, law enforcement, and immigration advocates, as well as a few Republicans. Rallies were held earlier this year to draw attention to proposed legislation among the broader community and to pressure legislature to pass the bill. In Worthington, Lee Velasco coordinated petition signings and rallies. Ultimately, the Democratic-controlled House approved the bill, but the Republican-controlled Senate never voted on it, and amid last minute negotiations it failed to make it into a compromise bill. The battle over drivers’ licenses for undocumented immigrants represents a broader struggle in Worthington and across the U.S. heartland.

Worthington’s immigrant population has grown in recent years due to the presence of the JBS USA meatpacking plant, the largest employer in the city with an estimated 1,800 employees. The plant is also the site of one of the largest immigration enforcement actions in U.S. history, when the company was owned by Swift. When ICE agents came to Worthington in 2006, hundreds of undocumented workers were arrested at the facility. The raid targeted various Swift locations around the country, and nearly 1,300 people were apprehended.

Shortly after the raids, JBS USA—the U.S. wing of the Brazilian company is one of the world’s largest meat producers—purchased the plant, a consolidation that reflects changes in the industry itself. The plant is an economic driver for the entire region, as electrical contractors, construction companies, livestock growers, and trucking firms all interact with the plant.

Worthington is an illustration of the extension of the U.S.-Mexico border as enforcement actions have moved into the interior of the country, beginning under the George W. Bush administration with the establishment of the Department of Homeland Security and Immigrations and Customs Enforcement (ICE) in 2001. The expansion of the border security regime continued apace under president Barack Obama, and has been extended under the Trump administration to target all immigrants, especially as he threatens an intensification of workplace raids, something the previous administration had backed off on. This has raised fears not only among immigrants without papers, but for all Latinx and Latin American residents, who fear profiling and discrimination.

In Worthington, the border is the main road going through town, where immigrant laborers drive to work each day at the meat packing plant and its associated industries. This is why the drivers’ license bill carried so much weight for a town like Worthington where the possibility of being pulled over, resulting in the eventual transfer to ICE, looms large.

The specter of ICE means that many parents are forced to have conversations with children to prepare them for the possibility of them not coming home. “Those are hard conversations,” says Lee Velasco. “How do you prepare their children for that possibility?” Her own children expressed concern about their status following the election of Donald Trump to the presidency, even though her Mexican-Laotian descendant family has papers.

It’s a fear that can’t help but feel relevant in an environment of “zero-tolerance” policy, where the administration is limiting legal avenues for immigrants to remain in the country, families are being separated at the border, asylum seekers are demonized, and private detention contractors are incarcerating immigrants for longer and longer periods in increasingly disturbing conditions.

ICE Ramps Up in the Midwest

Though it was the George W. Bush administration that laid the groundwork for greater coordination between local police jurisdictions and ICE, the Obama administration held the record for most deportations—a rate that could be outpaced if Trump continues his “zero tolerance” immigration strategy. However, the Obama era prioritized “felons, not families,” which allowed most detained undocumented immigrants to be released from custody while awaiting court hearing dates.

The Trump administration has expanded this deportation regime by targeting all and any undocumented immigrants, increasing not only the volume of arrests but also the length of time those arrested are held. The increase is due to both harsher enforcement policies and denials of bail, such as Attorney General William Barr’s instructions to federal courts to deny bail to asylum seekers. These dynamics are further compounded by an immigrant court system overloaded with cases but lacking necessary resources to resolve them. In January 2019 the New York Times reported that the backlog has increased 50% since Trump took office, with 800,000 cases waiting to be resolved.

Upon taking office, President Trump signed an executive order that deemed anyone in the United States without authorization deportable. Meanwhile, ICE has increasingly focused on the interior of the country, quietly but dramatically expanding their scope and reach amid a decline in arrests on the southern border, a 46-year low in late 2017. In fact, in October 2017, ICE released a “request for information” to “identify multiple possible detention sites to hold criminal aliens and other immigration violators… in the greater Chicago, Detroit, St. Paul, and Salt Lake City area.”

If the plans proceed, between 10,000 and 30,000 beds will be added to the deportation regime in predominantly Midwest cities, a systemic change that will further separate families and destabilize communities. Documents obtained in May 2018 by the National Immigrant Justice Center reveal that Sherburne County, Minnesota has submitted a proposal to ICE to increase capacity, with plans to expand its shared detention facility from 300 beds to a total of 500 beds. Separation takes a heavy toll on the families of immigrants, while rewarding institutions like Sherburne County jail, whose proposal is one of the leading contenders for the project.

The return of the workplace raid seems a likely outcome of the escalation of the deportation regime and expansion of “prioritization” for deportations. As more immigrants settle in rural communities, the risk and vulnerability grows more acute. Though some organizations like Unidos Minnesota do exist, and St. Mary’s Catholic Church in Worthington declared their church as a sanctuary in the wake of the election of Donald Trump, there are few resources to help advocate for immigrants’ rights and protections.

For Jim Callahan, the reverend at St. Mary’s for almost 10 years, the memory of the 2006 raid is fresh. “Kids went home and parents weren’t there,” he says. “It was really terrible, and many people came to the church here but nobody knew what was happening.” Callahan noted that he wants people to know that St. Mary’s is a safe haven for those in danger of facing deportation. “If there is ever a raid again, we are here; our doors are open.” 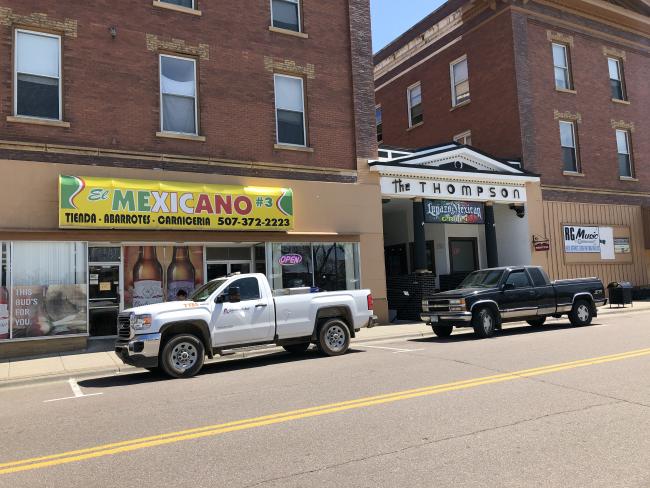 At first glance, the diversity of Worthington—which comprises some 62 different nationalities—is extraordinary. The largest ethnic group is Latinx, most of whom are Indigenous Guatemalans largely from the San Marcos district, a hotbed of government repression during the 36-year civil war, which lasted from 1960 to 1996. Many fled from the scorched earth policies of the Cold War era and Guatemalan military dictatorship supported by the United States.

The Latinx community began to grow shortly after this period, resulting in a massive demographic and cultural transformation. In fact, a 2015 Worthington school district report stated that “minority students are projected to be 71.4 percent of K-12 students in five years.” People of color are now the majority, in particular immigrants, who make Worthington what MPR describes as “more diverse than any other large Minnesota city,” with a population that was 93 percent white 25 years ago.

Walking through downtown Worthington, a vibrant mix of eateries and grocery stores represents this striking demographic shift, which has boosted a previously struggling downtown area. The future of the city is tied to the immigrant communities now dominating the commercial sector and filling much-needed employment gaps. But they have yet to ascend into the municipal power structure, such as City Council.

Meanwhile, Rev. Callahan says that his church has struggled to bring together communities of white Worthington residents with immigrant newcomers. Once a functionally segregated church, St. Mary’s took steps to link the congregations, according to Callahan. While using the same building, the English and Spanish speaking-speaking congregants had separate finance committees and parish and pastoral councils. Immediately Callahan brought these separate infrastructures together. Accordingly, Callahan developed a program that paired immigrant families with white parishioners to share a meal together. “We're trying to break down barriers so that people will understand that these are your neighbors.”

The church also offers medical and dental treatment for those without insurance. Callahan says that some parishioners question the programs. For Callahan the underlying racism, discrimination, and prejudice within the community still persists, attitudes that carry over beyond the church. In February 2019, a schoolboard vote to approve a bond to build a new intermediate school due to rising populations failed by just 17 votes. Callahan and others believe that prejudice was behind the close vote, as the new school would mostly serve the majority non-white school age population.

Lee Velasco, who has lived in Worthington, Minnesota since she was in middle school, has felt this prejudice first hand. “In the old community of Worthington, your children have to lose their language. Your children have to get accustomed to eating certain foods that they're not used to. Especially when you're a newer immigrant your children have to understand that no matter how good they are at something, they're never going to be as good as a mediocre white kid,” she says. “You have to water down who you are so that you can feel like you could belong.”

There are efforts to diversify positions of power but for Lee Velasco, these are not meaningful positions. “Worthington is a perfect place to be,” she says. “But when you speak about issues that you personally have been facing, or you hear stories of families who have faced these issues, they want to brush that under the rug.” For Lee Velasco an indication of change will come when “children can start seeing their themselves as leaders” and have a say in the town’s governance and direction.

These are struggles that are dominating conversations across the country. As Callahan describes it, Worthington is a microcosm of society at large, and President Trump gave voice to the silent hostility among many majority-white towns to newcomers. Today, these small towns are coming to terms with the challenges of a bellicose President and the day-to-day demands of an otherwise struggling town. The stakes—for the millions of immigrants suffering at the hands of nativist, racist policies—couldn’t be higher. “If immigrants left here tomorrow this town would die,” Callahan says.

Filiberto Nolasco Gomez is a former union organizer and is now the editor of Minneapolis based Workday Minnesota, the first online labor news publication in the state. Filiberto focuses on longform and investigative journalism. He has covered topics including prison labor, labor trafficking, and union fights in the Twin Cities.