The global explosion of apps like Uber, Glovo, Deliveroo, and Rappi has generated new ways of exploiting Latin American labor, as “collaborators” struggle to be considered workers. 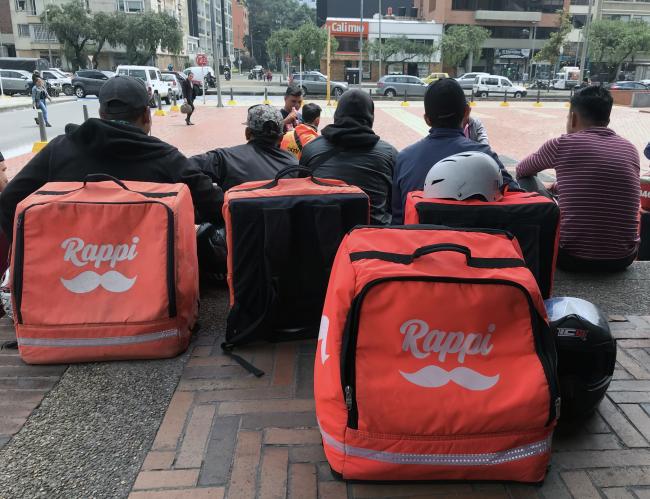 They stand outside hamburger and pizza joints. Dozens of them, repeatedly glancing at cellphones, looking at the advancing clock. They speak amongst themselves, laugh, say hello and goodbye. Some stay an hour, others just a few minutes. They stay until an order finally arrives: somebody’s food in a paper bag. Then it’s time for the backpack and a swift delivery, to do the only thing they know will bring them a bit of money: riding a bike or motorbike through the city. And that’s how it is, time and time again.

Ever more people have the city in their back pocket. They can get what they want when they want it just by clicking on their cellphone. Thousands of delivery services and drivers traverse streets where the most famous digital platforms operate: Glovo, UberEats, Deliveroo, Uber, and Rappi—the list could go on. But what brought these apps into being, and what makes them what they are today?

Never before have people been made so profitable in so short a time by an economic driver that is innovative, flexible, and dynamic: for some, it’s the sharing economy, while for others it’s the app economy. It is characterized by what the Davos World Economic Forum recognizes as part of a broader process: The Fourth Industrial Revolution, a gargantuan process of global change linked to technological and industrial development centered around cyber-physical systems, robotics, the internet, and connected devices. Its fundamental quality is the rise of intelligent companies that easily adapt to the needs of production with greater resource efficiency. That’s what we know at the very least. The growth of the internet and cooperative coordination between units of production—the so-called circular or shared economy—is the base that has launched and sustained the reach of well-known digital platforms.

There is no doubt at this historical juncture that capitalism has turned information into a source of capital, as maintaining economic growth through its traditional ally of industrial production is somehow no longer possible. The rise of these platforms constitutes a new business model capable of controlling and extracting an immense quantity of data—the more information it controls, the greater value this kind of economy acquires.

As technological innovation transforms the means of production, new companies and ways of doing business emerge. These transformations naturally involve changes in the organization of work, particularly in terms of labor relations. This goes alongside changes in the development of markets, our human relationships, and our community. It’s a trend towards disruptive businesses, smart cities, flexible workers, and government austerity.

Uber, UberEats, Rappi, Cabify, Deliveroo, and other apps operate under this digital framework, marking a considerable change in labor relations as we know them. Under this economic model, workers are considered collaborators, and in some cases independent contractors, without any kind of legal, labor, or social safety nets. For their part, companies argue they are only mediators capable of connecting collaborators to users through the service. A logic of “economic collaboration” sustains this commercial strategy.

Uber’s structure and finance model is based on the use of digital infrastructure to mediate between different groups of users. To control a platform like Uber is to own and operate software and hardware that makes up the “cloud.” Over time, they have developed their own software, which they can rent out or incorporate into new services that respond to the demands of other companies, something even Amazon has begun to do. It is by definition a structure that dislocates and outsources work.

Some estimates suggest that 29 percent of the labor force in the United States participates in the “sharing economy,” with Uber drivers making up the majority of these workers. There is no fixed salary on these platforms. In fact, there is no contract, health insurance, work schedule, or any framework for employment relationships. Driver earnings depend on a percentage the company applies in that country, as well as other determinations like distance, work completed during “peak hours,” or the number of times the “driver” rejects or accepts the requests.

As Nick Srnicek, a professor of digital economy, explains in his 2016 book Platform Capitalism, Uber, Globo, Rappi, Deliveroo, Beat, and the rest are model “austerity platforms,” characterized by the fact that they don’t own the goods or services they offer. Uber is not the owner of its vehicles, and Glovo is not the owner of the products it distributes. Their earnings come from the hyper-outsourcing and dislocation of workers, along with the control and acquisition of information.

This represents the emergence of a new form of work that employs an ever-growing number of people, mostly young people without job qualifications in an increasingly competitive labor market. It is an innovative way to create jobs that don’t necessarily qualify as jobs, that do everything possible to ensure those working them don’t assume that they themselves are workers.

A Crisis of Labor Precarity

Meanwhile, the problem of job insecurity in Latin America remains unsolved. Rates of unemployment, informality, underemployment, and self-employment have intensified sharply over the last 10 years, according to International Labor Organization (ILO) reports. These are the realities of a world of labor where the tradition of classic contracts no longer exists. With digital platforms, there are no salaries, no dismissal processes, no social security, and no unions, which in past generations secured important advances for workers. Laboring under the orders of an algorithm substantially aggravates the situation of precarious employment for those who resort to the apps because they have no other way to find work.

For young people, unemployment and precariousness are global trends that allow companies to amass significant profit. And the new terrain of app capitalism has created a gigantic delivery service based on the exploitation of hundreds of thousands of young people. Young people today make up nearly 40 percent of the world’s population, but almost one in four (21.8 percent) young people lack employment, education, or training, according to the International Labor Organization. These deficits affect their skill development, ability to generate income, and the possibility of long-term employability—making it impossible to plan for the future. With every passing day, young people around the world face the real and growing difficulty of finding a decent job. In Peru, these companies are deploying large advertising campaigns that aim to convince young people to become collaborators or entrepreneurs with offices in the streets and on sidewalks, selected by customers from their cellphones. In fact, these are workers on the edge.

Translated from Spanish by Patrick Timmons and Laura Weiss.