A Clash of Interests in Villa 31

Ahead of the October elections in Argentina, Villa 31 encapsulates the failures of the Macri administration in addressing marginalized communities' needs. 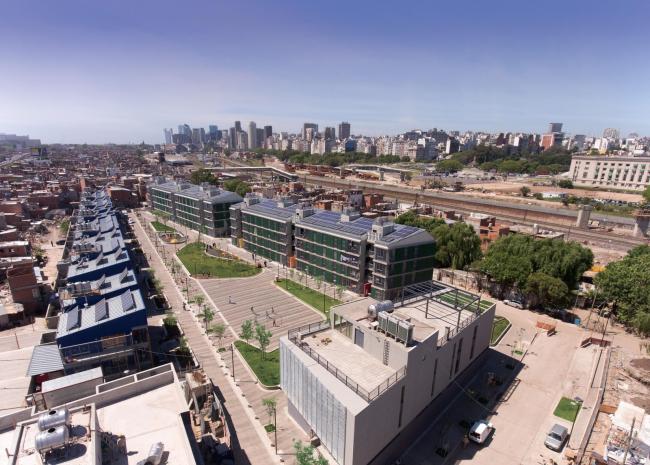 Despite concerted investment in the Villa 31 neighborhood of Buenos Aires, the community’s voters resoundingly rejected Argentine president Mauricio Macri in recent primary elections. The results revealed a growing gap between state and community interests. Receiving only 16.84 percent of the community’s votes, compared to his opponent’s 67.74 percent, the Macri administration’s failure to stabilize the economy and contentious re-urbanization plan sparked clear backlash. As the October 27 general election approaches, debate over governmental action remains heated.

Re-urbanization, or the development of a space with urban characteristics with socio-spatial relations that must be maintained and strengthened, seeks to recognize a community’s existing modes of production, values, and cultural identity. Yet many Villa 31 residents feel the government’s re-urbanization plan transforms existing relations and imposes a new identity, failing to establish an inclusive decision-making process.

In Buenos Aires, 56 slums or shantytowns, known as villas miserias, are home to approximately 10 percent of the city’s population. While villas served as temporary passing points for immigrants arriving in the mid-20th century, they nearly disappeared under Argentina’s military dictatorship during the 1970s. However, squatters re-populated the areas after the return to democracy in 1983, and villas have since become permanent communities due to long-term hyperinflation and economic recession.

One of the oldest and most prominent informal settlements in Buenos Aires, Villa 31 arose in the 1930s in the wake of the Great Depression and continued to grow with Argentina’s political and economic swings, rising inequality, and immigration. Similar to Rio de Janeiro’s favelas, the neighborhood has high housing density, a large population of informal renters, and absent municipal services such as sanitation and street lighting.

Currently home to over 40,000 residents, Villa 31 borders some of the most expensive neighborhoods in Buenos Aires. The community’s demographics—approximately 50 percent migrants, primarily from Bolivia, Paraguay and Peru—central location, large size, access to resources like public transportation and hospitals, and over 80 years of history distinguish it from other villas.

As Villa 31’s population multiplied under the Kirchner administrations, the city legislature passed Law 3.343 in 2009 to encourage integration with the rest of Buenos Aires based on a research team’s project at the University of Buenos Aires’ Institute for Human Spatiality/Inclusive Habitat Program. However, little resulted from the law due to insufficient coordination. In 2015, Mauricio Macri’s presidential election brought the municipal government under the control of his party, Propuesta Republicana (PRO), with Horacio Rodríguez Larreta as Chief of Government of the Autonomous City of Buenos Aires. Larreta established the municipal Secretariat for Social and Urban Integration (SECISYU) in 2016 specifically to enact a large-scale re-urbanization plan, the Programa de Mejorado de Vivienda (the National Housing and Habitat Plan), in Villa 31.

With financing and technical support from the World Bank and Inter-American Development Bank, the plan seeks to improve living conditions and housing safety, promote social integration, formalize all businesses, and support mobility and urban integration. To implement such goals, the SECISYU coordinates projects for new community constructions, renovations, and initiatives related to health, jobs, and education. The SECISYU’s plan also claims to prioritize resident participation and opportunities for the existing urban community to enact its own improvements, supporting “re-urbanization” rather than simply development. However, the minimal participation spaces and number of unfamiliar green initiatives prohibit many community members from assuming central roles.

In particular, the SECISYU’s objectives include improving green spaces, energy efficiency, waste collection, and rain collection to provide potable water. According to María Mercedes Di Virgilio, an independent researcher at CONICET with the University of Buenos Aires’ Gino Germani Institute, such changes are unprecedented in this context. “Indeed, the sustainability and climate change agenda has not yet been incorporated into industry standards, let alone among working class sectors,” she said.

Catherine Lynch, a senior urban specialist at the World Bank, described the Bank’s role and steps to incorporate environmental sustainability into planning. Her team hired consultants to review infrastructure and housing designs and provide comments on sustainability.

While this new technology may appear costly, Lynch observed, “The energy efficiency and sustainability measures have not added to the cost of the housing or the infrastructure, and in fact, the example of the sidewalk redesign to improve drainage for plants actually saved money.”

Environmentally-focused developments are not at the top of the list of concerns in Villa 31. Di Virgilio explained that when low-income communities gradually construct their own homes, as is the case with Villa 31, sustainability does not factor into building processes.

Jonatan Emanuel Baldiviezo, president of the NGO Observatorio del Derecho a la Ciudad (Observatory of the Right to the City), added that pressing day-to-day needs often take precedence over bigger-picture issues like climate change. Residents focus their attention on the future of their homes and their ability to pay mortgages, so “climate change discussion…has not become a preoccupation nor an interest of families,” Baldiviezo said.

The issue of climate change strikes greater relevance with the government’s agenda than among Villa 31 residents, and indeed concerns about environmental sustainability inform citywide advertisements, laws, and infrastructure changes. Although Lynch described recent solar panel trainings for Villa 31 residents as “quite successful,” Baldiviezo revealed that most do not understand how the solar panels function or why they are there. Villa 31 families are worried about “building construction, collapsing roofs and power outages,” not solar panels, he added.

Introducing an agenda of solar power to an unconcerned population creates points of contention. Though promising greater efficiency, new solar technology is unfamiliar to many, challenging the re-urbanization plan’s intention to maintain existing community values and desires. Danilo Rossi works on issues related to urban renovation, housing, and habitat, as well as key legislation for SECISYU. Because residents are accustomed to gas electricity, Rossi explained, “There is a lot of resistance because there isn’t gas. Families want gas.”

Resident attitudes towards the solar panels evoke a broader theme of distrust surrounding re-urbanization for some families, largely due to the lack of community participation in decision-making processes. Pablo Vitale, who coordinated informal education workshops in Villa 31 for 16 years and now co-directs the Asociación Civil por la Igualdad y la Justicia (Civil Association for Equality and Justice), reflected on the gap between government action and community awareness. “The process of constructing new housing did not specifically involve the population, and because of this, policies were not decided on by residents, but by the government,” he noted.

Furthermore, Di Virgilio emphasized that rather than environmental sustainability, relocation remains the key source of debate. Approximately 1,800 families live beneath the main highway running through Villa 31, but the city government’s plans to replace the highway with a park force these residents to relocate to new homes. While housing in the “YPF sector” will accept over 1,100 families, the remaining 500 families’ fates are unknown. Consequently, fears of displacement and eventual expulsion dominate community discourse.

Significant conflicts have broken out over the issue of relocation. The Gestión Participativa del Proceso de Re-Urbanización del Barrio Padre Carlos Mugica (Participative Management Board for the Re-Urbanization Process of the Carlos Mugica Neighborhood, or Villa 31) convenes municipal government officials, non-governmental organizations, and residents to discuss re-urbanization in accordance with Law 6129. However, DiVirgilio noted that these discussion spaces have a minimal presence and have even required police intervention in conflicts over residents’ relocations from under the highway. Given the urgency of relocation and infrastructure changes, the meetings must completely relegate sustainability agenda.

Villa 31’s complex political structures and community organizations also determine the viable methods for government interaction. With the rise of local cooperatives, residents have participated in infrastructure improvements and political activities through collective action since the mid-2000s. Consequently, both collaboration and notable activism have arisen in response to government involvement.

Given the community’s existing structures and norms, Di Virgilio called for more productive dialogue to include residents. “Without a process of genuine participation and dialogue on the population’s part in these processes, sustainability and climate change agenda appear more a gentrifying threat than a right to be guaranteed,” she stressed. Rather, DiVirgilio suggested such an agenda “should adopt a holistic focus which addresses organizational, social, and community development as much as urban, financial, and legal dimensions.”

Top-down re-urbanization efforts have also prioritized the creation of public green spaces as part of attempts to promote community development. In particular, construction of a public park atop the former highway in Villa 31 is underway. Rossi explained, “Green spaces are important because they serve as meeting places for any person of any age. Family life and playing in the streets is characteristic of the neighborhood, and we wanted to preserve that.”

However, costs accompany such projects as well. By physically merging Villa 31 with higher cost neighborhoods, Villa 31 becomes more prone to commercializing and losing its own defining characteristics.

New businesses such as banks and a McDonald's contribute to the area’s transformation. While some perceive such businesses as key markers of progress, Baldiviezo noted that many see a chain like McDonald’s as “unnecessary,” because the neighborhood already has its own local food economy. “The government has driven international corporations into the neighborhood, and [the McDonald’s is] seen as a government decision to encourage families to leave the community,” he said.

In addition to gentrifying threats, marketing tactics also raise questions. While new businesses can serve the population’s needs, the government’s representation of them is not always accurate. “When they announced the McDonald’s, they presented it as if it were a public service. It’s a hamburger restaurant; it doesn’t have anything to do with the population’s health,” Vitale asserted.

The question of priorities draws parallels to measures the government and development banks take to implement sustainability agenda. Slogans such as Ciudad Verde promote an image of Buenos Aires as a leader in climate action, but as Baldiviezo noted, such appearances are often superficial and can be difficult to balance with more pertinent needs in areas like Villa 31.

In contrast, Rossi suggested the importance of incorporating both immediate needs and long-term interests into planning. Not unique to Villa 31, daily uncertainty characterizes all of Argentina due to volatile political and economic conditions. “We don’t know what will happen tomorrow,” Rossi said. “We are accustomed to living with urgency.”

Low-income communities such as Villa 31 experience the effects of financial crises particularly drastically. In the August primary, Alberto Fernandez and Cristina Kirchner defeated Macri by more than 50 points in the community. Although el kirchnerismo has triumphed in every election since 2009 in Villa 31, the vote disparity has never been this large. In 2015, Macri lost in Villa 31 by a difference of only four points.

Supported by loans from international development banks, the municipal government made the largest investment in Villa 31 in the neighborhood’s history through the National Housing and Habitat Plan, estimated to cost 6.4 billion dollars for 2016-2019. However, many residents feel the investments will benefit companies, not existing community members, and are unhappy with their lack of inclusion in decision-making.

While Villa 31 holds little influence over electoral outcomes because a large portion of the population cannot vote due to migrant status or age, according to Vitale, the dominance of  kirchnerismo holds symbolic significance regarding community values and perceptions of government involvement.

Moving forward, to improve the effectiveness of re-urbanization with a sustainable focus, Di Virgilio, Baldiviezo, and Vitale all agreed that decision-making must become more inclusive, with Villa 31 residents in a central capacity. Consequently, the population could better understand policies and see its interests represented. In the meantime, the balance between state and community interests remains tenuous.

Julia Knoerr is a junior at Davidson College and a writer at the Coven Magazine.