Andean Unrest: The Neoliberal Cycle Comes to an End?

Across the Andean region, movements against corruption, austerity, high costs of living, and undemocratic maneuvers also fight to change a political and economic model rooted in dispossession. 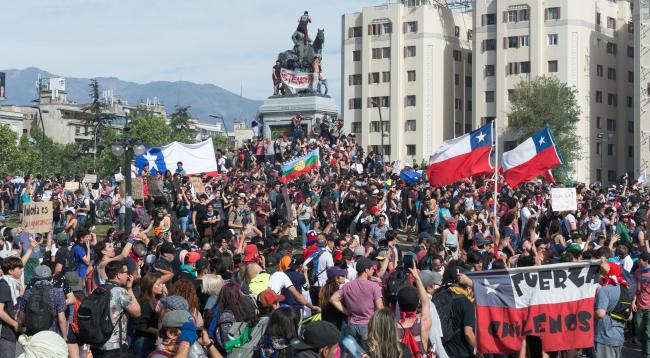 Military coups, bureaucratic authoritarianism, and the politics of anti-politics—an autocratic mode of governance based on the obliteration of political participation—brought neoliberalism to the central Andean region. Beginning with Augusto Pinochet’s coup in 1973 and ending with Alberto Fujimori’s authoritarian turn in 1992, the structural adjustments in Chile (1973-1990), Ecuador (1984-2002), Bolivia (1985-2006), and Peru (1990-2000) showcased the darkest aspects of capitalist transformations. In the name of market and economic growth, each of these states repressed, killed, and disappeared dissidents, making human rights violations the first truly transnational feature of these countries. Those who survived annihilation faced decades of material and social impoverishment, becoming subject to the worst perils of market-based ideologies and right-wing fundamentalism, all carefully embellished with Catholic-framed narratives of sacrifice and virtuous suffering. Andean poverty, ultimately, became a synonym of existence and a quest for survival beyond the margins. Within the past months and weeks, we have been witnessing powerful episodes of contestation against such enduring abjections: anticorruption protests in Peru, Indigenous mobilization in Ecuador, grassroots resistance in Bolivia, and—remarkably—a generalized sense of social dissent in Chile. At the core of this wave of Andean unrest, protesters are revolting against their recent histories.

Once military juntas and civilian autocrats finalized the first stages of structural adjustments, businessmen and entrepreneurs seized control of neoliberalizing Andean republics. Claiming to be both exemplary economic leaders and, in some cases, the embodiment of the redeeming miracle of progress, a new Andean plutocracy emerged and consolidated around the “preservation of the model.” In post-dictatorship Chile, no political party dared to question the constitutionally protected economic model left behind by Pinochet, the military, and right-wing civilian technocrats. In Ecuador, the constitutional sanction of a “social market economy” in the Montecristi document of 2008 produced an enduring tension between private corporations and civil society, often resolved in favor of a powerful few. In Bolivia, the Movimiento Nacional Revolucionario—once protagonist of a major social transformation—became the political platform of and advocate for the privatization of public services. In Peru, every post-Fujimori administration, even the potentially transformative terms of Alejandro Toledo (2001-2006) and Ollanta Humala (2011-2016) left expanding inequalities and socioeconomic poverties largely unaddressed.

Having entrepreneurs and businessmen—empresarios—dictating Andean politics produced a fairly obvious result: repúblicas empresariales, or state structures of power and production almost completely seized by corporate private interests. The Confederación de la Producción y el Comercio (CPC) in Chile, the Confederación de Empresarios Privados de Bolivia (CEPB), the Comité Empesarial Ecuatoriano (CEE) in Ecuador, and the Confederación Nacional de Instituciones Empresariales Privadas (CONFIEP) in Peru renewed, in the dawn of the twenty-first century, the role of capitalists as the most powerful political agents of their countries—true Washington Consensus warriors. Every political candidate who attempted to hold office at every level of the state administration, regardless of their affiliation, needed to please empresarios and receive either their explicit approval or their implicit acceptance—often wrapped up with hundreds of thousands of US dollars. Far from hiding these endorsements and their sketchy “contributions,” empresarios like Peruvian Roque Benavides, Ecuadorian Guillermo Lasso, or Chilean Andrónico Luksic participate in the public debate, presenting themselves as economic and political pundits or, as it is the case of tycoon and major tax-evader Sebastián Piñera, holding office. Under the control of empresarios representing private and foreign capital, the presidency turned into a position limited to “protecting the model” at any cost. Behind closed doors, empresarios provided seemingly unlimited resources for political campaigns, shutting down any expression of economic deviation with messages of international sanctions and stagnation. Empresarios weaponized national credit ratings and turned Moody’s and Standard and Poor’s into transnational mechanisms of economic austerity and political control. When domestic funds did not suffice to keep the model afloat, transnational corporations pitched in, creating unprecedented international networks of corruption as the recently unveiled Odebrecht scheme reveals. Repúblicas empresariales did not eliminate Andean states but transformed them into empty shells that functioned as little more than domestic and domesticating expressions of international corporations and the global market.

At the bottom of these twisted transformations, Andean civil society experienced the cruelest consequences. In the rural countryside, neoliberal policies promoting extractivism and agroindustrial initiatives brought Indigenous peoples and campesinos to unseen degrees of deprivation. The United Nations, the World Bank, and the Inter-American Development Bank had to redefine the meanings of poverty, persisting in indexing  “multidimensional” appraisals, in order to obscure the new degrees of impoverishment created by repúblicas empresariales. In light of an increasing global sense of environmental awareness, legislative agendas focused on increasingly policy deregulation for mining and monoculture, turning the countryside into an open landscape for a range of environmentally degrading activities. In cities, workers faced labor precariousness, retirement uncertainties, and everyday forms of exploitation. Interrogated about the future of the privatized pension system in Chile and elsewhere, the infamous Asociaciones de Fondos de Pensions or AFPs, Chilean Harvard-graduate José Piñera—President Sebastián Piñera’s brother—argued that all workers had to do was to put “more fuel for their Mercedes Benz.” Pollution, vanishing water rights, eroded soils, rising prices, stagnated wages, increasingly unaffordable healthcare, an indebting education system, framed the everyday lives of Andean citizens, urban and rural alike. Until recently, despite a few moments of upheaval that led to limited change, the model seemed resilient to discontent and dissent.

Over the last few weeks, social unrest has engulfed every single one of these Andean repúblicas empresariales. In Peru, the international scheme of corruption orchestrated by the Brazilian transnational building corporation Odebrecht created a massive political crisis that led President Martín Vizcarra to constitutionally adjourned the parliament and called for complementary parliamentary elections, addressing an enduring social claim for justice. Currently constrained to political aspects, the imminent return of the same elites in the parliamentary elections of January 2020 and the presidential election of 2021 will reveal both the strength and the fragility of a political and economic model hijacked by empresarios. In Ecuador, Lenín Moreno’s neoliberal transformation—including his latest economic package that eliminated oil subsidies and violently liberalized diesel prices—brought the Indigenous movement back to Quito. Despite the following military repression, and fearing the collapse of his administration, Moreno cancelled the financial package [Note: Moreno agreed to retain fuel subsidied and negotiate alternative spending cuts] while accusing former President Rafael Correa and President Nicolás Maduro of an international leftist complot and the ongoing claims of grassroots organizations and the Indigenous movement. In Chile, a 30-pesos rise of the metro fare in Santiago unveiled 30 years of accumulated frustration, bringing Chilean of every social class throughout the country to demand deeper social, political, and economic changes. President Sebastián Piñera’s military response, establishing a curfew in most regions of the country for the first time since the dictatorship and recently calling for a masqueraded paramilitarization of civil society, has led to stronger resistance, a general strike, and a consolidated demand for a constitutional transformation through a truly representative Constitutional Assembly . In Bolivia, President Evo Morales’s decision to seek reelection and seize the Presidency despite opposition from a vast sector of the Bolivian population and pivotal grassroots organizations, along with his own neoliberal transformation over the last few years, triggered an increasingly militarized civilian coup with disturbingly racist and theocratic tones.

Power holders in repúblicas empresariales seem to be unwilling to acknowledge the core of the crises they currently face. Underneath the demands for anticorruption policies, oil subsidies, lower costs of life, and political change, people on the streets have a much more profound claim for the abolishment of a depriving economic and political model once imposed to their parents and grandparents through dictatorial and authoritarian means. Promising progress and economic growth, this model only meant a legacy of death and dearth for the many. Within days, protesters are no longer coming after crumbs but the whole loaf, demanding the replacement of their political classes, a deep transformation of their constitutional structures, continuing with their own social transformations, and the end of neoliberalism. A wave of Andean unrest might be in the making and could hopefully offer a global lesson of truly democratic transformation from the bottom.

This piece originally appeared in The Abusable Past, which is published by the Radical History Review.

Javier Puente is an Assistant Professor of Latin American and Latino/a Studies at Smith College.