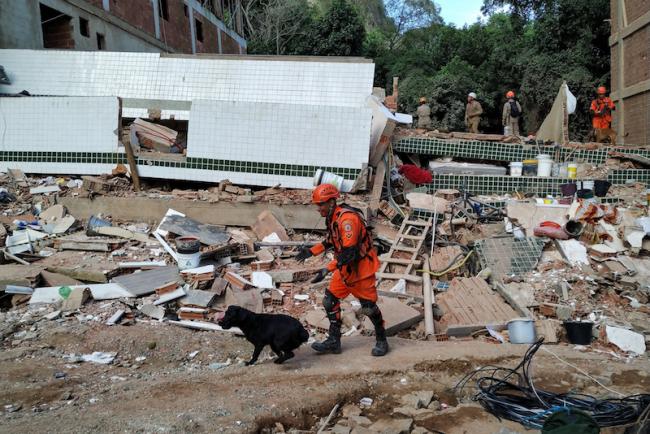 In April 2019, two buildings collapsed in the community of Muzema, Rio de Janeiro, killing 24 people as a result of the heavy rains that hit the city during the summer. Sixteen other buildings with similar characteristics remain at risk of collapse. The municipal government has debated between eviction, demolition, and a dangerous status quo, given the appeal filed by the residents of the complex to prevent their removal. The deaths, material damage, and widespread chaos in the city as a result of the storms revealed the negligence of the municipal, state, and federal governments and the lack of consistent urban and housing policies, especially for the most impoverished sectors of the city.

The Muzema tragedy, however, was not the result of natural causes: it was a product of the actions of Rio de Janeiro’s milícias, namely their urban practices and their real estate ventures. Muzema is a favela located in the west of Rio, a region under the territorial control of these milícias—parastate groups composed of police, military firefighters, and active or retired correctional officers who assert control over poor communities. The milícias are in the process of expanding and have already taken over many of the city’s favelas. They are authoritarian, and they suppress neighborhood associations and repress dissent through intimidation and murder. They offer security to residents, especially against drug trafficking and crime, as the basis for their legitimacy. In addition to these “protection” services, their businesses include selling gas cylinders, cable TV and internet, transportation services, and real estate, among other ventures. Territorial control provides them with a wealth of voters that has allowed them to elect representatives to all levels of executive power in the municipal, state, and national governments, institutionalizing their influence and guaranteeing impunity.

Police investigations have linked members of the milícias with the brutal March 2018 murder of Marielle Franco, along with her driver Anderson Gomes. At the time of her death, the councilwoman, a prominent Black and LGBTQI+ activist of favela origin, had been investigating milícia practices in the favelas and their connections with politicians and members of the government. Among the suspects of her assassination are milícia members directly tied to the family of President Jair Bolsonaro, demonstrating the link between both worlds.

Today, Rio de Janeiro is a case study in dystopian radicalism: the milícias are advancing violently and with impunity on the urban space and daily life of Rio residents, becoming part of the state structures at the municipal, state, and federal levels, seriously threatening democratic life in Brazil. Unlike other cities where urban social movements or municipal governments of the Workers’ Party (PT) achieved progressive reforms and inspired radical scholars such as David Harvey and James Holston to develop the concepts of rebel cities and insurgent citizenships, this was not the case in Rio de Janeiro. Urban violence and crime were the central axes that organized public debates about the city where the Left did not always have decisive or transformative weight.

The organization of para-police groups in Rio began at the end of the 1950s with the creation of the Grupo de Diligências Especiais at the initiative of the police chief of Brazil’s then-capital city. Its primary mission was the execution of criminals. Known as Esquadrões da Morte or death squads, these groups were composed of active and retired police officers. The Esquadrões extended their presence through the Baixada Fluminense on Rio’s periphery, an area that grew rapidly as a result of the allotment of lands—in many cases of dubious origins—as migrants arriving from the interior did not have access to housing in more central areas of the city.

These extermination groups, known as polícia mineira, charged vendors and small business owners for protection and carried out contract killings, as sociologist Michel Misse has noted. They also had links with community and political leaders, such as Tenório Cavalcanti, the famous leader of the Baixada known as the “man in the black cape.” It was said that he hid a German machine gun nicknamed Lurdinha in his coat.

In the 2003 book Dos barões ao extermínio: uma história da violência na Baixada Fluminense, sociologist José Claudio Souza Alves explains that the elimination of the rule of law and the advance of state terrorism during the 1964-1985 military dictatorship paved the way for the consolidation of death squads linked to the military police, a force created in 1967. Relations developed with other civil and political leaders who would take up positions within the structure of the state once democracy returned.

The current milícias emerged based on this model. They exercise ironclad military and territorial control over the favelas located in Rio’s periphery, dominate community organizations, and extend their links with politicians and public officials, allowing them access to structures of executive, legislative, and judicial power. According to scholars Ignacio Cano and Thais Lemos Duarte, five central elements define the milícias: territorial and population control by irregular armed groups in small areas; coercion of inhabitants and local businesses; drive for individual profit; legitimizing discourses of fighting drug trafficking and establishing order and protection; and the active participation of armed state agents in positions of command.

Rio das Pedras, located in Rio’s West Zone, was the first favela to fall under milícia control at the end of the 1980s. From there they expanded to other favelas of the West Zone and, later, the entire city. In Rio das Pedras, the milícia took over the residents’ association, expelling or executing its former leaders, and later it began selling its “services” to shopkeepers and the entire population of the favela. The neighborhood quickly became famous for “killing bandidos” (criminals) and ending drug trafficking. Amid a surge in drug trafficking-related violence—whether between rival factions fighting for control of the favelas or between criminal groups and the police—the general public, including many favela residents, received this rhetoric of security and order in the face of drug violence positively. Many perceived Rio das Pedras as an example of security, protection, and order.

As Michelle Airam da Costa Chaves’s study on journalistic coverage of milícias shows, there have been no major police operations in communities occupied by milícia groups in recent years, reinforcing the idea that these groups are a “lesser evil” compared to drug traffickers. This idea spread in the 2000s as milícias advanced into other favelas and expelled the drug trafficking operations there, as Alba Zaluar and Isabel Siqueira Conceição have analyzed. In 2006, Rio mayor Cesar Maia even classified milícias as “community self-defense” groups against drug trafficking and as possible interlocutors with the state, since they were made up of former police officers. At that time, Rio was preparing to organize the 2007 Pan American Games, the first in a series of international mega-events that included the 2014 FIFA World Cup and the 2016 Olympic Games. For the state, these milícias promised relative calm in the favelas during the events that had the city at the center of global attention.

Translated from Spanish by Vaclav Masek.

Rafael Soares Gonçalves (Ph.D. Université de Paris VII) is an associate professor in the Department of Social Work at the Pontifícia Universidade Católica-Rio de Janeiro (PUC-RJ), Brazil. He is the coordinator of the Laboratório de Estudos Urbanos e Soioambientais (LEUS) and editor of the journal O Social em Questão. He is the author of Favelas do Rio de Janeiro: História e Direito (2013). rafaelsgoncalves@yahoo.com.br