In The Edge of Democracy, a Netflix documentary, Petra Costa recounts the rise and fall of Brazilian democracy and the human costs of lost hope. While there is much to praise about the film, it sometimes sacrifices nuance for the sake of clarity. 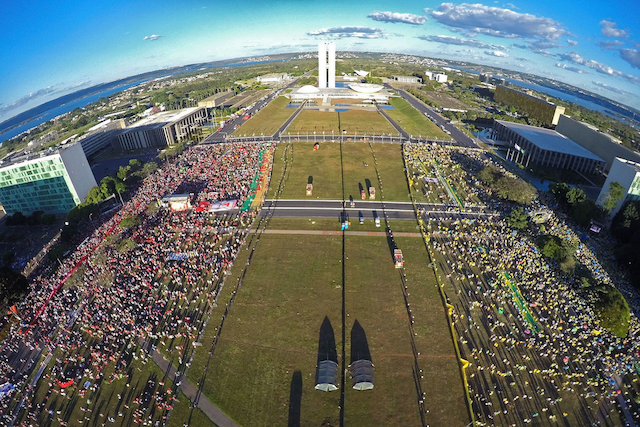 In 1966, two years after a military coup seized power in Brazil, Marxist scholar Caio Prado Júnior wrote that the country faced “one of those decisive moments in the evolution of human societies in which the injustice of its basic institutions becomes clear, sensible, and sufficiently noted by all.” Five decades later, following the hard-fought return to democracy, the painstaking construction of new republican institutions, and the electoral successes of Latin America’s largest left-wing party, a sequence of misfortunes and conspiracies have once again exposed Brazil’s civic frailty. This process is the subject of Petra Costa’s melancholic new documentary The Edge of Democracy, currently streaming on Netflix.

The film successfully melds the grand scope of national politics with the intimate story of the director’s personal background and her descent from hope to cynicism. The result is a dramatic, if at times flattened, rendering of Brazil’s turbulent recent history. The Edge of Democracy serves as an effective primer for those who have not closely followed developments in Latin America's largest country and a forlorn trek through ghastly but familiar terrain for those who have.

The documentary is composed of two distinct threads that at times intersect. The first recounts Brazil’s political history, examining the seemingly sudden derailment of a country that seemed to be overcoming intractable problems like endemic poverty, inequality, and hunger. That history is notable for its dramatic highs and lows. During the dictatorship, supported by successive U.S. presidents, the government violently stifled dissent and brutally cracked down on leftists—including Costa’s parents—some of whom took up arms and went underground. At the same time, in the early 1970s, the regime produced a short-lived period of explosive economic growth known as the “economic miracle.”

By the end of the decade, the miracle had faded, giving way to inflation and a newly energized labor movement. The most prominent union leader to emerge in this period was Luiz Inácio Lula da Silva, a man of humble social origin and preternatural political talent. In the film, Costa recalls her mother’s first impression of Lula as “the embodiment of all she had longed for: workers becoming political actors, opening the way towards a democratic path.” Lula would help lead popular resistance to the regime. In 1980, alongside allies in academia, the labor movement, and progressive sectors of the Catholic Church, he founded the Workers’ Party (PT) as the first grassroots political party in Brazilian history. Beginning in 1989, he would run for president—and lose—every four years before finally succeeding in 2002.

The second thread deals with the personal experiences of the director and her mother, who at one point in the film commiserates with Dilma Rousseff, Lula’s hand-picked successor, in Dilma’s apartment over their shared abuse at the hands of the military regime. Costa’s previous documentary Elena (2012) dealt with her sister’s suicide against the backdrop of Brazil’s democratic transition. As a director, she is moved by the trauma that shattered dreams can inflict on individuals and, in this film, a nation. Indeed, The Edge of Democracy is best understood as the product of Costa’s profound disillusionment with the balance of Brazil’s recent history.

In office, the PT oversaw a period of sharp economic growth and expanded government support for the poor and marginalized. Costa includes moving scenes of predominantly Brown and Black Brazilians attesting to how government programs created after 2002 changed their lives for the better. In this way, the film demonstrates why huge swathes of Brazil’s working class remain loyal to Lula, even since he was sentenced to prison last year on dubious corruption charges. Rather than gloss over the myriad scandals of the PT years, Costa undertakes the arduous task of reconciling the party’s undeniable accomplishments with its failure to transform an elitist and self-interested political culture. Rather than seriously challenging the economic, social, and political system it inherited, the PT accommodated itself to preexisting constraints and did just enough to improve the lives of the dispossessed while taking nothing from the country’s entrenched elites. Costa’s assessment of the PT seems to be the one broadly shared by many progressives the world over—namely, that despite the party’s compromises, Lula and Dilma did more to ameliorate endemic poverty and inequality than any president before or since.

Costa is a deft storyteller attuned to the particularities of a given time and place. She recounts the country’s political chronology succinctly and with striking, often beautiful images drawn from archival and original footage, including stirring drone shots of Brasília. But in her understandable rush to get to the tangled machinations of more recent Brazilian history, Costa smooths out many of the narrative wrinkles that would have made for a more nuanced historical account. For example, though Costa presents Lula as the inevitable central figure of the Brazilian left, his ascendance was not a given. Suspicion from some sectors of the Left followed Lula and the PT from the beginning, primarily concerning the party’s purported lack of political sophistication or strategy. Much of that ill will faded as the PT started winning elections at the municipal and state levels, outpacing other progressive parties that succumbed to many more ideological deviations along the way.

But as one longtime communist militant put it in 1979, according to newspaper archives, the PT “comes from the unions, where there are people of every inclination, even some who say they lean left, but move always to the right. The only party authentically for the worker is the PC do B,” the party of Pedro Pomar, an important communist luminary assassinated by government forces in 1976. Indeed, Costa describes Pomar as her parents’ “leader” during their years underground. Dilma herself helped found the Democratic Labor Party (PDT) in the 1980s, not the PT. Why? When did she join the party that would elevate her to the presidency? These questions remain unanswered. In this, Costa sacrifices a sense of contingency for the sake of clarity, a reasonable choice but one worth noting given the film’s investment in the sweep of Brazilian history.

Costa does not feign neutrality. She weaves her admiration of Lula and the PT into the film, heightening the sense of outrage at Dilma’s impeachment on spurious grounds in 2016 and the rise of far-right congressman Jair Bolsonaro. As she explained in a recent interview, “I agree with the notion in anthropology that one cannot be objective… In order to escape the appeal of objectivity, you must state that what you are doing is interpreting the facts.”

Costa’s alienation—from her government and millions of her fellow citizens—is the emotional heart of the film. While some reviewers have faulted the director for her crestfallen narration, her pained voiceovers express the bewilderment of an embattled sane minority in a country gone mad. Even viewers unfamiliar with the Brazilian case can identify with Costa’s alarm at the democratic erosion of her country in the wake of successive PT victories. Brazil, after all, is not the only place where pluralism is under siege.

Costa’s narration also makes a point to acknowledge her own position as a member of Brazil’s economic elite. Her grandfather, she reveals, founded one of the country’s largest construction conglomerates, one of the main companies investigated in Operation Car Wash. Thus, a key question Costa grapples with is the nature of privilege in a country as unequal as Brazil. If elites will not hesitate to undermine democracy for their own ends, does privilege constitute complicity? This ambivalence adds a much-needed layer of complexity to a story that, while extremely well told, will be familiar to observers of Latin America. Costa came of age as part of a generation disillusioned with the political process and then reinvigorated by the PT. Her personal political journey as recounted in the film recalls a thirsty straggler in the desert who stumbles upon an oasis only to see the water disappear as cupped hands approach parched lips. Dashed hopes are, in a way, the film’s raw material.

Early in the film, the camera pans silently through empty rooms in the presidential palace, a subtle critique of the hollowness of Brazilian institutions. This is a marked contrast to Lula’s festive inauguration and inaugural speech to Congress in 2003. Noting the ample handshaking and backslapping as Lula traverses the floor of the legislature, Costa uses the scene to illustrate the president’s political gifts as well as his conciliatory disposition. The moment captures the promise of the PT in power at a moment of peak optimism and self-confidence.

But the impression one gets from the totality of the film is that of a country slipping into unconsciousness, tiptoeing toward an authoritarian morass epitomized by Bolsonaro. The film’s emotional resonance makes up for a certain historical determinism in its account of Lula and his rise to leftist, working-class leadership. Whatever hope remains won’t be found in the halls of power but in the struggle of those who saw something of themselves in Brazil’s first working-class president.

Andre Pagliarini was a visiting assistant professor of modern Latin American history at Brown University in 2018–19 and will begin a lectureship at Dartmouth College this fall. He is currently preparing a book manuscript on 20th-century Brazilian nationalism.