150 years after the deadliest inter-state conflict in Latin American history, a reflection on Paraguay's past—and how it affects the present. 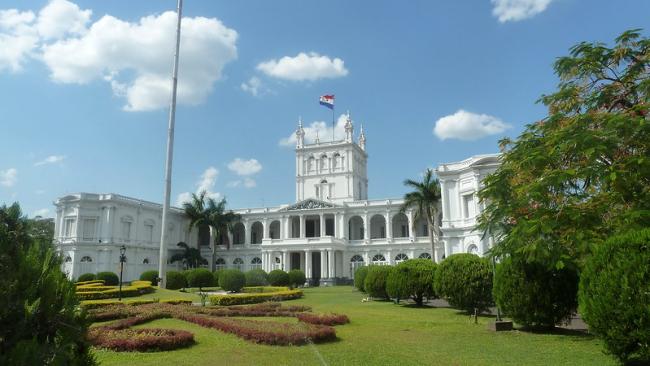 March 1 marked the 150th anniversary of the end of the deadliest inter-state conflict in Latin American history. The War of the Triple Alliance (1864-70) pitted Paraguay against a formidable combination of more populous and better resourced neighbors: Brazil, Argentina, and Uruguay. Paraguay lost the war and with it about 40 percent of its territory. Some historians estimate that 60 percent of Paraguay’s population died in battle, of disease, or of starvation, including 90 percent of adult men. In Guaraní, one of Paraguay’s two official languages, the conflict is known as the Guerra Guasu (Great War), reflecting a common view of the defeat as the defining episode in the nation’s history.

In Paraguay, official commemorations of the sesquicentennial were relatively subdued, perhaps because the government is struggling to respond to an epidemic of dengue fever. Overcrowded public hospitals are sending patients home to convalesce, while up to 40 percent of residents in the capital of Asunción and surrounding areas will contract dengue. President Mario Abdo Benítez himself fell ill in January. For ordinary Paraguayans, the outbreak constitutes yet another reminder of the state’s inability to provide basic services.

Paraguay has one of the fastest growing economies in Latin America and one of the weakest governing states. In attempting to account for this predicament, analysts often look back to the 19th century. The war devastated Paraguay’s economy as well as its population. In an effort to pay reparations to the victors, Paraguay’s post-war government sold public lands, promoting foreign investment and concentrating land ownership. As female survivors labored to rebuild their country, they confronted severe food shortages, epidemics, and sexual violence. Today, many conversations about Paraguayan development, inequality, and gender relations present contemporary problems as consequences of the Guerra Guasu.

Paraguayans have remembered the war in ways that proved as damaging as the conflict itself. Lamentations about the Guerra Guasu have impeded public reckoning with subsequent events, especially the Chaco War against Bolivia (1932-35), the 1947 Civil War, and the dictatorship of Alfredo Stroessner (1954-89). As historian Herib Caballero explains, the war proved “a massive blessing for politicians…because someone else is always responsible for whatever happens—someone else from 150 years ago.” By encouraging citizens to blame the distant past for subsequent problems, the conservative, nationalistic Colorado Party has managed to control Paraguay for all but five years over the last seven decades.

According to architect and writer Jorge Rubiani, “Debating history is Paraguay’s national sport.” A single historical figure dominates most discussions: Marshal Francisco Solano López, Paraguay’s authoritarian president and military leader during the Guerra Guasu, who died in the final battle at Cerro Corá. For decades after the war, López was discredited as a tyrant. Memories of territorial loss fueled Paraguayan nationalism, eventually driving the nation to another deadly war in the 1930s. This time, Paraguay managed to defeat Bolivia and defend its claims to most of the contested territory in the Chaco. About 40,000 Paraguayan soldiers died in the process, along with an uncountable number of the region’s Indigenous inhabitants. In 1936, López’s remains were retrieved from the jungle, and a crowd of 100,000 watched as they were placed in the Pantheon of Heroes in Asunción.

López’s reputation continued to improve in the 1940s and 1950s, as the Colorado Party consolidated its power. In 1947, a protracted political conflict resulted in as many as 50,000 casualties and drove up to a third of the population into exile in Argentina. Like the Chaco War, the Civil War disrupted agricultural production, destabilized administrative practices, and imposed great fiscal costs. It also allowed the Colorados to seize control of the state. In 1954, General Stroessner led a successful military coup, deposing another Colorado president and launching his 35-year dictatorship.

Under Stroessner, the underground economy flourished, and the state became a vehicle to serve the dictator and his party. Supporters received land and political favors, while opponents were persecuted. Paraguay’s 2008 Truth Commission concluded that the regime had tortured more than 18,000 people, while at least 423 were killed. Stroessner promoted Paraguayan nationalism by celebrating López, whose heroism could be molded to suit any occasion. In 1974, when Chilean dictator Augusto Pinochet visited Paraguay, Stroessner awarded him a medal depicting López while extolling the Christian struggle against communism. Stronistas popularized a revisionist argument that Britain had driven Argentina and Brazil to war. Although British companies did supply weapons and loans to Brazil, historians have found no evidence that Britain was directly involved.

Stroessner was removed from office in 1989, in another military coup led by another Colorado general. As democratic procedures were reestablished, the Colorados remained the most influential party, and the state continued to serve the interests of the political elite. In 2008, left-leaning Catholic bishop Fernando Lugo assumed the presidency, marking the first peaceful transition of power from one political party to another since the nineteenth century. Four years later, Liberals and Colorados cooperated to carry out a legally questionable impeachment process—described by some international observers as a “parliamentary coup”—that nullified the democratic significance of Lugo’s election. Abdo Benítez, the current president, is a Colorado and the son of Stroessner’s private secretary.

Engaging with the Past

Today, López’s name graces the presidential palace and major avenues in several cities. The marshal has his critics, but many people are inclined to agree with the writer Juan O’Leary, who argued in 1930, “The dilemma is clear and simple: We are with him [López] or with the Triple Alliance...If we believe that he was only a tyrant, a bloodthirsty madman, a monster who sacrificed us to his ambition, we justify the enemy that came to redeem us.” Paraguayans remember the war as a heroic campaign that revealed the nation’s courage, and as an epic tragedy that derailed its development, leaving Paraguay in a subservient position to its neighbors. Both arguments are based in truth, but they reinforce the pernicious myth that what happened after 1870 did not matter.

Discussing history is a national pastime, but conversations about the 20th century are rare. Even the Paraguayan National Archives focuses on collecting documents from the period up until the end of the Guerra Guasu. According to sociologist Ana Couchonnal, many Paraguayans exhibit “a certain compulsion to keep talking about the war,” while schoolchildren grow up reciting lessons about it. “In Paraguay one learns that one has survived an epic saga…that the neighbors have been bad and are to blame for the never-ending national misfortunes.” This argument “ends up evading the direct responsibility of various governments for the management of a deeply poor but above all unequal country.”

Of course, Paraguayan history did not end in 1870. Only by studying and engaging with the more recent past can we fully understand the current shape of the Paraguayan state and begin to address the nation’s problems. As Paraguay’s economy has grown over the past two decades, poverty has declined, but economic inequality persists. Land ownership remains exceptionally concentrated; an estimated 1.6 percent of landowners control 80 percent of arable land. About 38 percent of the population lives in rural areas, where poverty rates are higher and access to state services more limited. Poverty is particularly acute in Indigenous communities, which make up 1-2 percent of the population and suffer discrimination, exclusion, and violence. In February, the body of an unidentified Indigenous girl was found in a backpack near the bus terminal in Asunción.

Paraguayan women tend to exercise power within their families and households, but they have limited influence in public spaces. Women have less access to high-quality education and employment, earn lower wages, and are less likely to hold political office. In recent years, activists have publicized alarming cases of child sexual abuse and child pregnancy, sometimes facilitated by the practice of criadazgo, where girls are sent to work in the homes of wealthier families. The Paraguayan state remains ill-equipped to protect its most vulnerable citizens and remediate inequality, in part because low rates of effective taxation limit public investment.

In the final moments before his death in 1870, López allegedly exclaimed, “I die with my country!” He left behind a nation in ruins, with a decimated population that was determined to survive. Paraguayans’ sense of national identity has grown stronger over the ensuing years, sustaining its people as they faced new challenges. If coupled with a more nuanced understanding of history, that feeling of shared purpose will prove an asset in the campaign to build a stronger state and a more equal nation.