Narco-terrorism Charges Against Maduro and the “Cartel of the Suns”

New narco-terrorism charges against Venezuelan president Nicolás Maduro are notable for their lack of evidence. 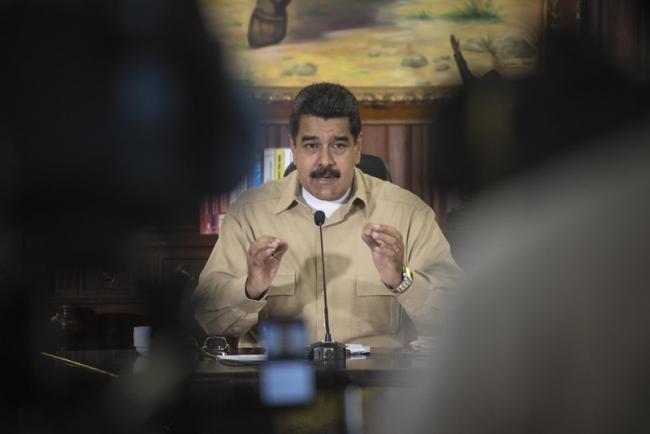 On March 26, U.S. attorney general William Barr announced new charges against Venezuelan president Nicolás Maduro and other Venezuelan officials, along with two leaders of the FARC in Colombia. The charges included narco-terrorism, drug-trafficking, and corruption, and came with a $15 million reward for information leading to the arrest of Maduro.

The corruption of the Maduro government is well known, and the U.S. government has long accused Venezuelan officials of working with the FARC to traffic cocaine out of Colombia. Since early 2019, the United States has not recognized Maduro as the legitimate head of the Venezuelan state. Two points among the list of charges do, however, stand out as being novel and indicative of renewed U.S. efforts to delegitimize Maduro’s rule. The first is the claim that Maduro and other government officials are members of a drug-trafficking organization called the “Cartel of the Suns.” The second is that this so-called cartel conspires to weaponize the cocaine trade to commit terrorism against the United States. This renewed pressure on Maduro comes as Venezuela faces a coronavirus public health crisis, which exacerbates the impact of U.S. sanctions.

New and Old Charges Against Maduro

The charges announced by Barr are the latest measures by the Trump administration aimed at increasing pressure on Maduro. Trump imposed sanctions on Venezuela in 2017, again in January 2019, and again in August 2019. When the leader of the Venezuelan National Assembly, Juan Guaidó, declared himself the legitimate president of the country, the United States supported Guaidó’s claim and refused to recognize the inauguration of Maduro’s second term. At the time, Trump said that “all options were on the table,” which was widely considered an allusion to a possible coup.

Pressure on the Maduro government is hardly unique to the Trump administration. During Barack Obama’s second term, U.S. prosecutors investigated the Maduro government’s connection to cocaine trafficking. These investigations stopped short of Maduro, but implicated Diosdado Cabello, one of the most powerful figures in Venezuelan politics. Cabello is one of the officials charged with Maduro in March. The Trump administration has taken a more aggressive stance towards Maduro himself. Along with the new charges, the Department of Justice released wanted posters for Maduro, Cabello, and others.

Evidence of corruption and predation by the Maduro government is readily available. In 2019, the United Nations Human Rights Council created a fact-finding body to investigate reports of extrajudicial execution, forced disappearance, torture, and other abuses by the Venezuelan government. Maduro’s government suppresses political opposition and inhibits freedom of speech and the press. Rising insecurity and a crumbling economy have prompted millions of Venezuelans to flee the country. The U.S. government uses these abuses to justify sanctions, despite evidence that they impact Venezuelan people more than the government. Given the documented abuses of the Maduro government, the new charges are notable for their lack of credible evidence.

Here Comes the Cartel of the Suns

The first charge in the new indictment of Maduro describes a “corrupt and violent narco-terrorism conspiracy between the Venezuelan Cártel de los Soles and the Fuerzas Armadas Revolucionarios de Colombia (FARC).” While the FARC was listed by the U.S. State Department as a Foreign Terrorist Organization in 1997, the Cartel of the Suns is not listed as a terrorist organization. Nor does it appear in the State Department’s yearly reports on human rights in Venezuela or in the U.S. Drug Enforcement Agency’s (DEA) annual National Drug Threat Assessment documents.

Despite little U.S. government mention of the Cartel of the Suns prior to March, the new charges characterize the so-called cartel as a “drug-trafficking organization comprised of high-ranking Venezuelan officials,” operating from 1999 until the present. The name “Cartel of the Suns” appears sporadically in media reporting from 2015 onwards and can allegedly be traced back to 1993. In these earlier instances, the name is used as a shorthand term for various drug-trafficking networks within the Venezuelan state. Indeed, a 2018 investigation by Insight Crime found that “drug trafficking structures in the Venezuelan state are not a cartel, they are a series of often competing networks.” With the new charges against Maduro, this series of shifting networks is reimagined as one structure, with the Venezuelan president at the apex.

The alleged “narco-terrorism conspiracy” between the Cartel of the Suns and the FARC targets victims in the United States, rather than Colombia or Venezuela. The charges declare that the Cartel of the Suns aimed to use “cocaine as a weapon” and to “flood the United States with cocaine, and inflict the drug’s harmful and addictive effects on users in this country.” Although there is no generally agreed upon definition of terrorism, this conspiracy would fall outside of almost every definition of terrorism put forward by scholars or policymakers.

The most widely cited instances of narco-terrorism involve drug-trafficking networks or other crime groups using violence against civilians to influence political decision-making. Among the best-known cases is the bombing of Avianca Flight 203, allegedly masterminded by Pablo Escobar to assassinate presidential candidate César Gaviria. The conspiracy of which Maduro is accused is, however, not terrorism committed by traffickers, but rather trafficking as terrorism. If large-scale trafficking counts as terrorism, then we might wonder why the president of Honduras, Juan Orlando Hernández, retains the support of the U.S. government, even after being accused of benefitting from trafficking. The charges against Maduro even describe an “air bridge” between Venezuela and Honduras for cocaine trafficking.

The new charges against Maduro characterize the leader and his associates as a unique threat to the United States, despite evidence to the contrary. The charges assert that “most drug-trafficking organizations…have sought to recede from their roles in importing narcotics into the United States,” and that Maduro’s cartel is an exception to this trend. Contrary to this claim, the DEA’s 2019 National Drug Threat Assessment finds cocaine availability to be increasing or stable in most of the United States and that Mexican groups dominate cocaine trafficking. Furthermore, U.S. interagency data reveals that Venezuela is not a primary transit country for cocaine imported to the United States. Six times as much cocaine passes through Guatemala as Venezuela, but as with Honduras, there is no mention of a Guatemalan conspiracy to flood the United States with weaponized cocaine.

Militarization During a Pandemic

Attorney General Barr claimed that announcing the charges against Maduro during the coronavirus pandemic was “good timing,” as Venezuelans needed a more effective government to navigate the crisis. Others criticized the timing, stating that Venezuela needed greater unity between political opponents. Guaidó himself called for a unity government, touting the support he enjoys from international financial institutions as an incentive to working with him. Since announcing the new charges, the U.S. government has signaled support for a unity government, but also started moving Navy ships towards Venezuela. Given that most of the cocaine and all of the heroin, methamphetamine, and synthetic opioids entering the United State arrive through other regions, this military buildup appears aimed less at disrupting trafficking routes, and more at exaggerating the threat posed by Venezuela.

There are legitimate reasons to condemn the Maduro government’s treatment of the Venezuelan people. There is little reason, however, to suggest that Maduro sits atop a criminal cartel conspiring to weaponize cocaine against the United States. This portrayal makes government abuses a matter of personal greed instead of systemic corruption. It also implies that if Maduro and his associates are removed, corruption and trafficking will end. Trafficking in Venezuela almost certainly does not depend on Maduro, and if Mexico is any indication, the end of state coordination of drug trafficking might lead to greater competition and violence.

The creation of cartels and conspiracies may be a cynical political ploy during a pandemic and a U.S. election year, but these fabrications have lasting effects. Insight Crime claims that the new charges “officially lay bare the existence of the cartel,” less than two years after stating that no cartel exists. The words used by the government matter, and they are easily taken for hard facts. We should expect to see the “Cartel of the Suns” used frequently—within and outside of the U.S. government—while Maduro retains power, and even after any political transition.

The simplified images of cartels, no matter how inaccurate, become popular television series. They also linger as readily available pretexts for the militarization of security and for U.S. intervention in the Americas.

Philip Luke Johnson is a doctoral candidate in political science at the Graduate Center, City University of New York. His research focuses on security, violence, and the media in Latin America and the United States.