A History of Inconvenient Allies and Convenient Enemies 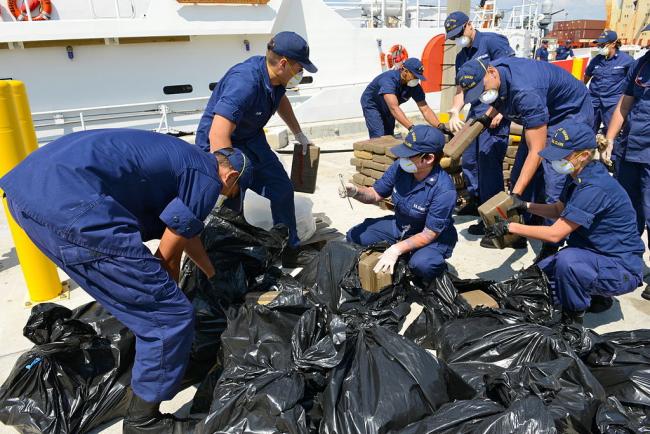 On March 26, U.S. attorney general William Barr announced new “narco-terorrism” charges against president Nicolás Maduro and more than a dozen other high-ranking Venezuelan officials. The episode yet again demonstrated that America’s long-running War on Drugs is not actually about targeting illicit drugs. Instead, drugs represent important tools in cementing and perpetuating US systems of imperial control—what the historian Suzanne Reiss refers to as an “alchemy of empire.”

U.S. drug interdiction campaigns, which have been global in scope since World War II, function as broader counterinsurgencies that have sought to pacify recalcitrant states and prop up pliant allies. As Reiss argues in We Sell Drugs: The Alchemy of US Empire, “Drug control became a mechanism for extending US influence into the domestic and international life of its enemies’’—and, I would add, its friends.

The irony, perhaps expressed as an act of imperial psychological projection, is that the very revanchist forces that the U.S. covertly allied with to destabilize revolutionary regimes were intimately involved in the drug game. The specific experiences and words of Colonel Roger Trinquier—a French military officer on the losing side at Dien Bien Phu in 1954 and later a feted counterinsurgency theorist—can serve as a dictum for this broader history: “To have the [Hmong], one must buy their opium.”

Nationalist Chinese forces (KMT), right-wing Cuban exiles, military officers within the south Vietnamese government, and Nicaraguan Contras form part of a longer list of inconvenient—and at times unpredictable—allies that U.S. military and intelligence agencies historically collaborated with in the attempt to assert and expand control and influence in Southeast Asia and Latin America.

In our Netflix-fueled popular imaginations of fantastical drug lords and fashion-forward kingpins, most people likely don’t know the name Kuhn Sa. Yet, throughout the 1980s and early 1990s, Sa—dubbed the “Prince of Death” by U.S. prosecutors, while he called himself the “King of Opium”—controlled an estimated half of the world’s heroin supply from his base in northeastern Myanmar. As University of Wisconsin historian Alfred McCoy chronicles in his biography of Sa, it took decades of shifting alliances, missteps, and ruthless power plays to create the King of Opium. Aided by 20,000 soldiers and alliances forged with Myanmar’s military dictatorship, the socialist republic of Laos and high-ranking Thai military officials, Sa’s refineries processed an estimated 80 percent of the Golden Triangle’s heroin. His high purity “China White” heroin quickly captured U.S. markets during the 1980s, particularly in New York City. When U.S. attorney general Richard Thornburgh filed a sealed indictment against Sa in 1990, he proved defiant: “President Bush may have the button for nuclear weapons...but I have the button for opium. My opium is stronger and more potent than your nuclear bombs. I should just feed you this poison.” Echoes of Mao’s famous 1955 statement about U.S. atomic bombs but with a narco twist.

Broader Cold War contexts also shaped Sa’s rise to power. Here, we can find some useful lessons for understanding U.S. policy today. To understand the arrival of China White to New York City streets during the 1980s, we must go back to the 1950s, when Central Intelligence Agency operatives organized a series of covert operations that, in effect, protected southeast Asian drug traffickers and drug smuggling in order to organize and maintain anti-Communist countersinsurgencies. To quote McCoy, “Since ruthless drug lords made effective anti-Communist allies and opium amplified their power, CIA agents...tolerated the illicit traffic.”

McCoy’s classic work, The Politics of Heroin: CIA Complicity in the Global Drug Trade, traces the global history of covert U.S. agents collaborating with drug producers and smugglers from the Mediterranean to 1950s Burma, 1960s Laos, 1970s Afghanistan/Pakistan, and 1980s Colombia/Central America. In Sa’s Myanmar case, local-regional conflicts that underscored that nation’s history of postcolonial state formation mixed with the end of formal European imperialism, the 1949 Chinese Revolution, and the United States’ anti-communist imperial actions in Southeast Asia enabled his gradual rise to the upper echelons of the global narcotics trade. The so-called “prince of death” was a consequence of the United States waging empire in Southeast Asia during the 1960s and 70s.

1979 was a globally significant year when, to paraphrase Lenin, decades unfolded in a matter of weeks. Revolutions in Iran and Nicaragua, along with coups and Soviet intervention in Afghanistan, expanded the theater of operations for CIA officials willing to partner with “narcos” to advance broader “anti-communist” goals. Echoing previous campaigns in Southeast Asia, CIA covert operations that aimed to secretly—and cheaply—wage war against the Soviets occupying Afghanistan helped transform the Afghani-Pakistai borderlands into a major heroin-producing region by the mid-1980s. Making the Soviets “bleed” necessitated a constellation of shady alliances that would bring about imperial blowback in the 2000s: Afghani opium farmers and smugglers; fundamentalist mujahadeen leaders who turned to the drug trade—directly or indirectly—to complement funds received from CIA, Saudi and Pakastani sources; and, Pakistani military and intelligence officers who controlled heroin labs and smuggling infrastructure. The governor of Baluchistan told U.S. journalists in 1990 that Pakistani officials “deliver drugs under their own bayonets.” Caravans that took CIA weapons into Afghanistan would often come back loaded with raw opium, destined for processing in Pakistani labs. By the time the Soviets left in late 1980s, Afghanistan directly competed with Kuhn Sa for markets in Europe and the United States, second globally only to Myanmar in opium production.

Cocaine helped fuel that other main theater of secret CIA drug wars during the aggressive rollback policies of the Ronald Reagan administration. The self-proclaimed Contra president’s clandestine war against the Sandinistas in Nicaragua—a small, impoverished country of an estimated 3.5 million people in 1980—used a motley international network to finance and arm the viciously violent Contras. In addition to the infamous secret arms deals with Iran, a “dark alliance”—to use the late journalist Gary Webb’s description—that included Contras, Colombian drug lords, Central American smugglers, and American street dealers allegedly also raised funds. The CIA, according to a 1989 Senate Subcommittee Report, at the very least knew about the drug trafficking—and, like in Afghanistan, allowed the operations to continue.

Before he was gunned down in 1984, journalist Manuel Buendía alleged connections between CIA agents, Mexican and Colombian drug smugglers, and Mexican intelligence officials to reveal yet another dimension to the broader Contra effort. Former DEA agent Hector Berrellez stumbled upon this Mexican connection when leading Operation Leyenda in the late 1980s. An operation that sought to capture individuals responsible for the torture and murder of DEA agent Kiki Camarena in 1985, Berrellez obtained information that linked drug money to anti-Sandinista opearations and that Mexican druglords like Rafael Caro Quintero had allegedly lent his ranches in Veracruz for the training of Contras. Perhaps the most explosive allegation? A CIA agent had witnessed and participated in the torture of Camarena in order to protect the Agency’s narco-connections to the Contra War.

In the midst of yet another declared War on Drugs in the 1980s—one that asked Americans to “just say no” to drugs while domestic police forces waged actual war against communities of color—U.S. imperial policy had facilitated the arrival of drugs to U.S. streets. Counterinsurgency abroad helped generate the very drugs that led to counterinsurgency at home.

The War on Drugs as Ouroboros.

Back to Venezuela, Colombia and “Drug War Capitalism”

Just as the U.S.-led post-World War II international drug control regime had the power to classify drugs as licit or illicit commodities, it also facilitated the designation of “friendly” allied nations and insubordinate “narco-states.” The designation primarily hinges not on actual drug production and trafficking, but upon accepting U.S. imperial prerogatives. Hence, the focus now on Venezuela and Maduro and not on Colombia—the world’s largest producer of cocaine—or certain Central American nations that serve as key transit nodes along eastern Pacific Ocean smuggling routes—the source of an estimated 85 percent of the cocaine entering the United States. Honduran president Juan Orlando Hernández might be nervous, with a brother currently facing trafficking charges in U.S. federal courts. Still, he seems safe at the moment—though the story of longtime ally-turned-enemy Manuel Noriega should give him pause.

Former Colombian president Álvaro Uribe also forms part of this history. In office from 2002-2010, Uribe was long dogged by alleged links to Medellín cocaine traffickers and viciously brutal paramilitaries as he rose to political prominence during the 1980s and 1990s. By the time he took office in 2002, the country had received billions of dollars from the United States as part of “Plan Colombia”: A joint US-Colombian-funded counterinsurgency against Marxist “narco-terrorists” that, according to the work of journalists Dawn Paley and Steven Cohen, used an assortment of violences to open the country to foreign capital for extractive industries, megadevelopment projects, and land grabs. As president, Uribe cemented Plan Colombia as a form of governance that justified itself by using the “metrics” of security, stability, and prosperity. He did not hesitate to use alliances with narcos and right-wing paramilitaries to bring about his “Democratic Security”—a security forged on the murdered and disappeared bodies of union leaders, Indigenous and Afro-Colombian activists, the urban poor, and the campesinos murdered by the Colombian military and then dressed up as guerrillas. The consequences of drug war capitalism and forever war for the masses—systematic human rights violations and impunity, plunder, deepened socio-economic inequality—were presented as “progress,” “development,” and “investment” for Colombia.

And all the while, cocaine production began to steadily rise. Today, the acreage devoted to coca production in Colombia is higher than in pre-Plan Colombia years. But the United States, in the words of General John Kelly, has a “special” relationship with the Colombia that Uribismo created. Joe Biden continues to laud his work as “one of the architects” of Plan Colombia. And it continues to serve as a prototype for Mexico and Central America.

Decades ago, Franklin Delano Roosevelt allegedly expressed this type of special relationship in a more crass, direct way about Anastasio Samoza: “He may be a son of a bitch, but he’s our son of a bitch.”

Alexander Aviña is an associate professor of history at Arizona State University and the author of Specters of Revolution:  Peasant Guerrillas in the Cold War Mexican Countryside (Oxford University Press, 2014)