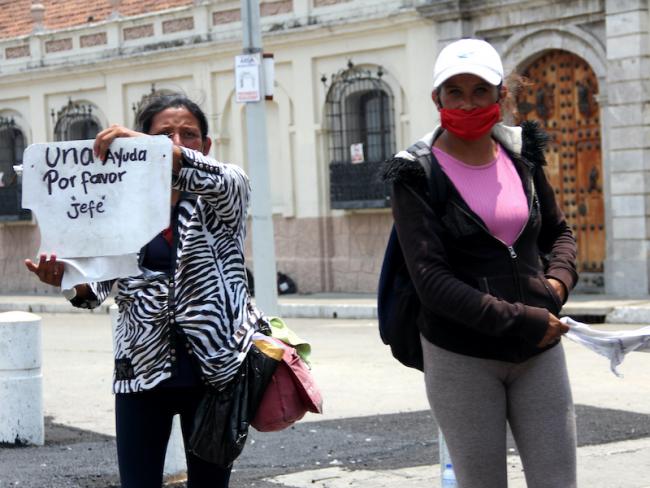 A drive down 7A Avenida in Guatemala City’s Zone 1 leads to the historic city center. Government-enforced lockdowns due to COVID-19 have rendered the area a ghost town, with the only people around waving white flags. The white flags, which signify lack of food, have become commonplace in major thoroughfares around the capital.

Every day for the past two weeks, Rosa Juárez takes a 40-minute walk up from La Limonada, an emblematic popular neighborhood in the heart of Guatemala City, to the intersection of 7A Avenida and 10ma Calle. She has been waving her flag, asking for help, two blocks away from Congress.

As the country braces for a partial reopening during the most dangerous weeks of the pandemic, white flags begin to scatter around the country. Slow to disburse funding for affected communities, President Alejandro Giammattei’s first political crisis—a clash with Congress over guarantees for basic services—adds to an ongoing public health emergency and a looming economic catastrophe.

“The few that pass us by pretend we are not here, even though our presence is growing. My neighbors and friends have helped me in the past, but now, they are in a position where they also need help,” Juárez said.

Juárez, a 44-year-old clerk at a local hardware store, was furloughed without severance pay. The store where she worked is now facing closure following eight weeks of stoppage. And while Juárez mentions that the owner has filed for one of the 10 government programs aimed at supporting small business, “not a penny has been given.”

For Maya k’iche’ activist Andrea Ixchiú, these demonstrations are nothing new. “In a way, the flags have always been there— people are only noticing now because of the crisis. White flags have given communities in need the opportunity to visibilize a struggle against permanent inequality.”

Because of the pandemic, the first 100 days of President Giammattei’s administration have been unlike any in the country’s history. He has resorted to antiquated methods of communication like nightly broadcasts announcing the new case count since the country first reported a patient positive for coronavirus back on March 13.

“Giammattei has good public relations, but he is not a good politician. It is concerning that his administration has not been able to tend to people's health needs,” said Ixchiú. “The lack of coordination, political leadership, and terrible negligence in handling the pandemic are very noticeable.”

Grappling with a unique public health crisis, the president has spent more time immersed in a state of emergency than out of it. His administration has designated $1.4 billion to a series of programs designed to remedy the economic impact of the pandemic. These include funding for programs aimed at SMEs—direct cash transfers to individuals affected by the crisis—and labor insurance for those furloughed in the private sector. The Ministries of Labor and Economy will hand out a $10 per day insurance for over 21 thousand suspended employees.

However, only 0.43% of the promised funds have been disbursed, and workers in the informal sector—up to 70 percent of Guatemala’s economically-active population—have been largely abandoned despite some 200,000 food boxes delivered by the army in marginalized communities.

Iduvina Hernández, a human rights defender and journalist, labels Giammattei’s crisis management style as “schizophrenic.” For Hernández, Giammattei wants to take action and concentrate power, but ultimately gives in to the pressures of the powerful private sector, who are pressuring him to reopen the economy. Hernández explains that Giammattei has conceded to their pressure by easing restrictions too soon. “Technically, Guatemala is attempting to attain herd immunity because the only cost is disposable lives.”

Even with these government programs, the economy is expected to contract 2 percent, according to the IMF. The impact could be even greater, considering the sharp drop in remittances, which plummeted in March of this year to $746.7 million, 9.6 percent less than the same month the previous year.
The Guatemalan healthcare system is also facing a catastrophe. Even before the pandemic, Guatemala had one of the most ill-equipped public health systems in Latin America. It ranks fourth worst for doctors per thousand inhabitants, with 3.55 per 10,000 inhabitants in 2018 according to the WHO. Moreover, there are only six hospital beds per ten thousand people in the country. According to UNICEF, in Guatemala, half of children under the age of five are stunted, with three in five suffering from malnutrition among the poorest 20 percent of children.
Now, coronavirus has compounded these structural shortcomings: Hospitals are underprepared, food is scarce, and child malnutrition is worsening. “The virus has laid bare the depth of the inequality in Guatemala,” said Ixchiú.
Although there is a steady rise in COVID-19 cases every day, the lack of testing implies that the peak of the curve is still elusive. On April 20, the president reported that the number of tests would reach 1,500 daily, but the information he has since shared on his televised addresses indicate that the government is carrying out between 400 to 600 tests daily.
As bureaucratic inefficiency prevents the distribution of funds for the affected population and pressure to act more urgently grows by public displays of hunger in the streets, Giammattei continues to be confronted by a combative legislature. 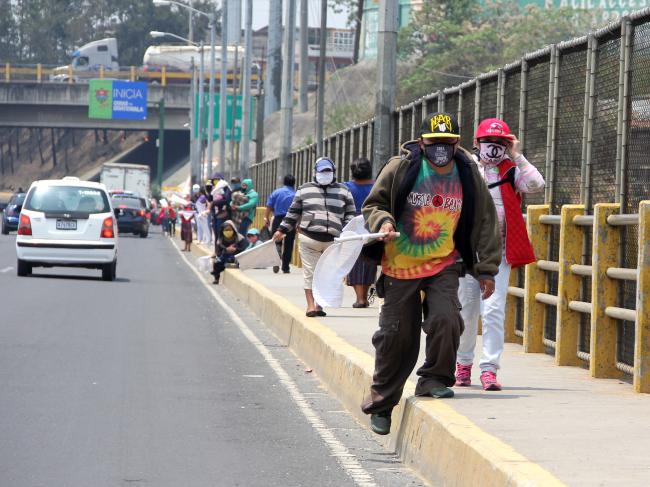 Decree 15-2020 and “Los acarreados”
During a press conference on April 29, President Alejandro Giammattei vetoed Decree 15-2020, a provision that established that companies would not be able to cut water and electrical supply to users for lack of payment due to the ongoing public health emergency. Alleging technical deficiencies like “the Decree is not clear to indicate who will be the beneficiaries,” Giammattei said that the provision was “unconstitutional.”
That same day, during a nighttime televised address to the nation, Giammattei dismissed the protestors waving white flags as acarreados—a derogatory term for trucked-in, poor, and ignorant demonstrators.
“I have seen how people are trying to take advantage of others by paying people to come to protest with white flags to try to appear as acarreados. We have identified some people from Zona 7, some of the first to receive the Saldremos Adelante boxes, standing on the street waving white flags—acarreados,” Giammattei said.
“This is very characteristic of the Guatemalan elite,” said Ixchiú. “The term objectifies people and renders their agency obsolete. The term treats people as things that act out of the desire of others. It also carries a historical burden, as it is normally associated with Indigenous peoples. It is disrespectful.”
Giammattei’s presidential veto on Decree 15-2020 prompted a series of legal battles. Two-thirds of Congress voted to reject the veto. In response to that, at least 13 different writs of amparo have been submitted against the congressional vote to reject the presidential veto. The amparo serves as a remedy for the protection of constitutional rights found in certain Spanish-speaking jurisdictions like Mexico, Chile, and Colombia. Amparos are invoked by any person who believes that any of their rights are being violated.
The writs were presented by power brokers representing an amalgam of international interests that supersede the urgent needs of the population at risk. These writs comprise a constellation of economic and political elites that have long been present in the statist discourse of development in Guatemala, ultimately leaving out the communities from any consultation processes that involve their land and resources.
Take the first lawyer that submitted an amparo to the Constitutional Court against Decree 15-2020, Oscar Fernando Scheel Morales. He defended Corporación Multi-Inversiones (CMI), one of the largest business conglomerates in the region, litigating for CMI’S RENACE hydroelectric dam on the Cahabón River in Alta Verapaz. RENACE has been enmeshed in controversies that involve re-engineering Cahabón’s course, potentially leaving over 20,000 q’eqchis’ in the community of San Pedro Carchá without access to water. Scheel Morales also defended the Guatemalan Nickel Company (CGN), accused of contaminating Lake Izabal.
Giammettei's ongoing exchange with the legislature is revealing cracks on the official block. Although his party VAMOS presides over Congress, the left-wing UNE still holds a majority. If the opposition remains somewhat coherent in its voting strategy, Giammattei runs the risk of losing the support of the Guatemalan public, and most importantly, the organized private sector.
Ultimately, politicking is background noise as debt piles up in the absence of wages for the affected communities. “People will pay no mind to the political games unless their basic needs are met. And right now, they are not,” said Hernández. 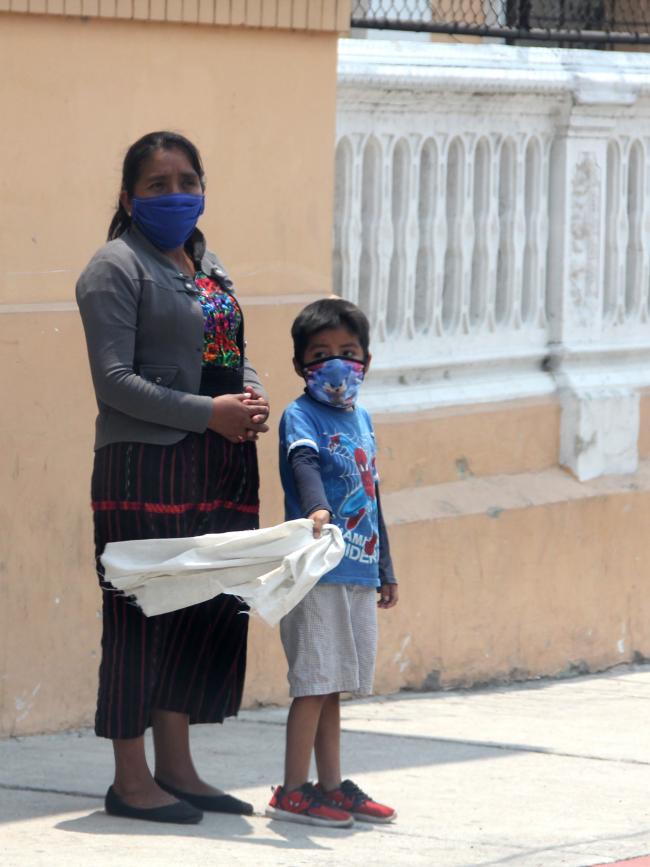 In a Rush to Reopen?
On Sunday, May 3, Giammattei announced that Guatemala has “successfully completed” the containment phase of the COVID-19 emergency, saying that the country will enter its “reopening phase” starting Monday, May 4. Stores are allowed to reopen, and commercial plazas—but not malls—can resume operations.
With the businessmen representing telephone and cable companies, and officials from utility companies in the background, the president said that a decree “was not necessary” to guarantee that basic services were not cut during May, June, and July. According to Giammattei, based on this public commitment, users will be able to go to companies and make a payment agreement of up to 12 months. Citizens are at the mercy of companies abiding by the president's promise without legal backing.
“The priorities are clear: The corporate cynicism values profits over people,” said Ixchiú.
In a geopolitical context, although the government’s message to Guatemalans seems to indicate that the public health crisis is under control, deportations continue to bring the virus into the country. Any lockdown strategies are futile attempts at "flattening the curve" when almost 20 percent of Guatemala’s COVID-19 cases are deportees. As a great majority of the population are "informal" and people are willing to risk to work, the consequences may be fatal.
The Guatemalan economy has been paralyzed for eight weeks, but it has reproduced systems of expulsion that have exacerbated inequality for centuries of malicious public policy.
“If Guatemala has a face, it is that of misery,” said Hernández.