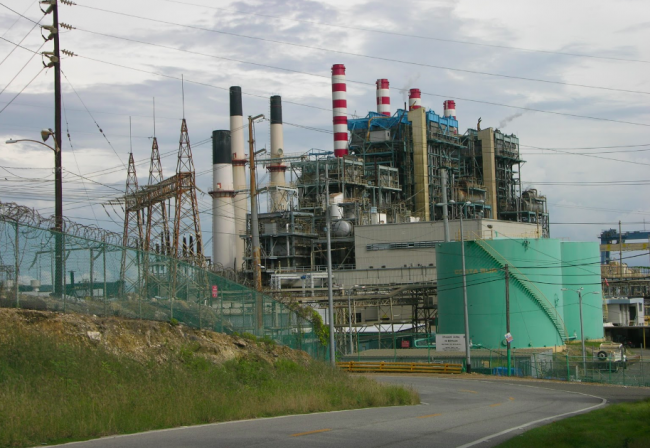 As demand for fossil fuels drops, some industry and corporate actors are working across borders to exploit Covid-19 and Puerto Rico’s ongoing energy and other crises. On June 1, the Puerto Rico Electric Power Authority (PREPA) withdrew a proposal to the Puerto Rico Energy Bureau that would have applied $1.26 billion in federal funds to cover so-called “temporary” emergency generation costs. Prior to this withdrawal, PREPA’s CEO José Ortiz indicated that the Federal Emergency Management Agency (FEMA) would be providing funds to the power authority to finance the deal. He described the proposed agreement as “the biggest in FEMA history,” generating “over $2 billion in construction” by expanding methane gas infrastructure in Puerto Rico. And while this proposal was cancelled—partially because of public pressure—Ortiz’s most recent remarks suggest the scheme still could materialize.

One day after PREPA withdrew the proposal, Ortiz expressed contradictory messages to journalists and politicians during a public hearing. According to El Nuevo Día, the PREPA director remarked in Spanish that it was “very probable” the proposal would not move forward, while also claiming the importance of keeping the plan “still alive just in case.”

FEMA supported the temporary generation project, and the New York-based oil and gas company New Fortress Energy LLC was in the running for the contract. The temporary generation plan is just one part of a proposal to use billions of dollars in federal funds to build additional centralized fossil fuel plants. Despite the archipelago’s commitment to achieving 100 percent renewables by 2050, the approach would increase Puerto Rico’s reliance on imported methane gas while suppressing rooftop solar and distributed microgrid alternatives. U.S. taxpayers, Puerto Rico electricity ratepayers, and other concerned individuals should be wary of what lies ahead for the archipelago’s energy future.

The Covid-19 crisis has reduced electric energy demand in Puerto Rico by approximately 10 percent, according to PREPA officials. But problems with the centralized fossil-fueled electric grid posed grave threats long before the pandemic. In September 2017, Hurricanes Irma and María decimated the energy transmission system and led to months-long outages, as unscrupulous utility and political leaders negotiated controversial and costly “repair” contracts. Still reeling from these unnatural disasters, on January 7, 2020, a 6.4 magnitude earthquake and numerous aftershocks rocked the southern region of Puerto Rico’s largest island. The quakes damaged the Costa Sur power plant and left many without power.

These seismic shocks confirmed what environmental community leaders, academics, and some industrialists and PREPA employees have been insisting for years: Puerto Rico’s centralized electrical grid needs a radical and urgent overhaul. Unfortunately, those who have an interest in maintaining and strengthening the status quo are proposing more imported fossil fuel dependency with a deepening focus on methane gas.

Doubling Down on Methane Gas

Immediately after the 6.4 earthquake, PREPA estimated that repairs to the damaged Costa Sur plant would take a year to complete. Then, on February 12, PREPA’s management filed an urgent request with the local regulatory body, the Puerto Rico Energy Bureau, for approval to lease 500 megawatts of temporary power generation. The proposal allegedly was to compensate for the lost capacity of the Costa Sur plant. But the rental arrangement would be far more costly than the one-time expense of about $30 million to repair Costa Sur.

In an April 16, 2020 letter to the Puerto Rico Central Office for Recovery, Reconstruction and Resilience (COR3), FEMA pledged to pay for the relocation of temporary essential services, which Ortiz publicly interpreted as covering temporary generation leasing costs. In March, the PREPA executive director had proposed renting the generation units for $1.26 billion, paid for in monthly installments of $70 million. This electric power generation plan should concern U.S. taxpayers because FEMA emergency relief funds should not be used for private corporate interests or to further top-down decision making that hooks Puerto Rico on imported liquified natural gas (LNG). This scheme would only exacerbate Puerto Rico’s colonial dependence via increased reliance on another contaminating fossil fuel.

In May, a New Fortress Energy official announced that the company had been short-listed in the Request for Proposals to lease the expensive temporary generation to PREPA. Previously, in an opaque and undemocratic contracting procedure, New Fortress was awarded a contract to supply methane gas—presumably from its fracking operations in Pennsylvania—to the San Juan power plant.

New Fortress is a relative newcomer to the methane gas industry, but it is already an aggressive player with a wide reach that impacts many other places beyond Puerto Rico. The company’s current and proposed operations include fracking wells in Pennsylvania, LNG ports in New Jersey, LNG rail train transport down the eastern seaboard to Florida, and LNG shipments to Jamaica. New Fortress stood to reap more than $1 billion in PREPA’s temporary generation scheme.

PREPA officials have claimed that repairs to the Costa Sur plant will not be completed until February 2021. However, during a PR Energy Bureau conference call in April, officials stated that the Costa Sur plant could in fact be operational by mid-August. According to PREPA’s own publicly available data, peak summer demand is 2,800 megawatts. Factoring in these repairs, PREPA is scheduled to have a capacity of 3,300 megawatts in May and almost 4,000 megawatts by August—enough for a substantial reserve margin. These figures correspond to Ortiz’s April 13 statement during a webinar titled “Puerto Rico and COVID-19: Impact on the Grid,” when he said: “By May this year we’re going to have 3,300 [megawatts of total capacity] and we’ll be close to 4,000 megawatts by the end of August.”

At the same time, while PREPA officials cited the peak May and June demand in their urgent request, the temporary generation units would not be operational until mid-July at the earliest. In other words, the temporary generation would not be working in time to meet the alleged unmet demand—which does not appear to exist—through means that are exorbitantly expensive and offer no investment in future energy generation, especially in the form of community-directed solar.

Shortly after PREPA withdrew the emergency proposal, Ortiz attended a press conference and acknowledged these realities. He argued for halting the plan because the conditions necessitating the temporary generation no longer existed. He noted that with the drop in energy consumption, a reserve of about 1,000 megawatts likely will exist in the peak summer months. In response to the lack of transparency in PREPA’s dealings and the executive director’s flipflopping position, many solar community advocates are requesting an investigation into the temporary generation plan by both local and federal officials.

Proponents of the Queremos Sol proposal also suggest that any emergency procurement process for new generation should focus on adding permanent on-site renewables and Battery Energy Storage Systems. In addition to being sustainable, these resources perform well during seismic and other extreme events. Dozens of PREPA workers already have received training in installing rooftop solar systems, which could be implemented in conjunction with local renewable energy contractors and communities. Accordingly, Queremos Sol critiques PREPA's discussions of including mega-solar infrastructure to reach the 2050 renewable energy goal, given that these power sources would have been sited on fertile land, would cost more than distributed alternatives, and would not advance decentralized, local community empowerment with electricity generation. For these reasons, in spring 2020, Queremos Sol members appealed to the PR Energy Bureau to block the temporary generation proposal and called for greater transparency and public engagement.

Stopping the Re-entrenchment of the Energy Status Quo

Temporary generation and new LNG projects will deepen Puerto Rico’s dependence on imported fossil fuels and do nothing to lessen the vulnerability of the centralized grid to future hurricanes and earthquakes. Ramping up gas reliance in Puerto Rico—especially through an alliance with New Fortress—would make the archipelago a captive market for the U.S. fracked gas industry. Construction of new infrastructure along with already-existing LNG imports would not generate the urgent overhaul that Puerto Rico so clearly needs. Instead, this plan would cause the further entrenchment of an unsustainable status quo and increase reliance on dirty energy. In other words, it would double down on the model already threatening human health and diminishing the possibilities to achieve environmental, climate, and energy justice so necessary in this era of climate and pandemic threats.

An April 2020 Harvard University study demonstrates that an increase of only 1 ug/m3 of particulate matter emitted by fossil fuel plants, cars, and other sources of pollution is associated with a 15 percent increase in Covid-19 death rates. These results emphasize the urgent need to curtail and cease fossil fuel use, particularly the construction of new plants, while enforcing air quality regulations. This imperative is a significant but difficult imperative to achieve under a genocidal Trump administration, which is busy at work with its policy of overturning already inadequate energy standards. Tragically, both in the United States and in Puerto Rico, the people whose lives are most at risk in the face of Covid-19 are the same individuals already disproportionately living in communities ravaged by environmental, climate, and energy injustices.

If U.S. taxpayers and others who care about Puerto Rico’s ongoing energy and financial struggles do not want their tax dollars to subsidize the fossil fuel industry, they must demand that FEMA funds not be used to build up another centralized grid and additional LNG infrastructure in the archipelago. Instead, they should join efforts to promote distributed rooftop solar alternatives exemplified in the Queremos Sol proposal and resist the disastrous PREPA, FEMA, and New Fortress LNG energy scheme.

As seismic activity persists and another hurricane season begins, the precarity of Puerto Rico’s electric grid is a matter of life and death. In a series of early June tweets, University of Puerto Rico engineering professor Marcel Castro-Sitiriche responded to a misleading statement by Ortiz alleging that a future hurricane like María would cause, at most, 2.5 months of outages. This claim overlooks history and rural communities. Drawing on his post-María research, Dr. Castro-Sitiriche documented the impacts on individuals and families who experienced the greatest grid vulnerability, urging the public not to forget that about 200,000 rural homes went without power for months longer than many other areas. These disproportionate experiences with prolonged power outages must be central to any plan for a more just, equitable, and sustainable energy future for all people living in the archipelago.

Kenji Cataldo is a recent graduate from Princeton University, where he studied history of science and Latin American studies and was an active member of the Princeton Environmental Activism Coalition. Cataldo has researched the history of environmental activism in Puerto Rico and its relationship to the independence movement. Cataldo’s current research is an oral history project about climate change and U.S. colonialism in the Pacific.