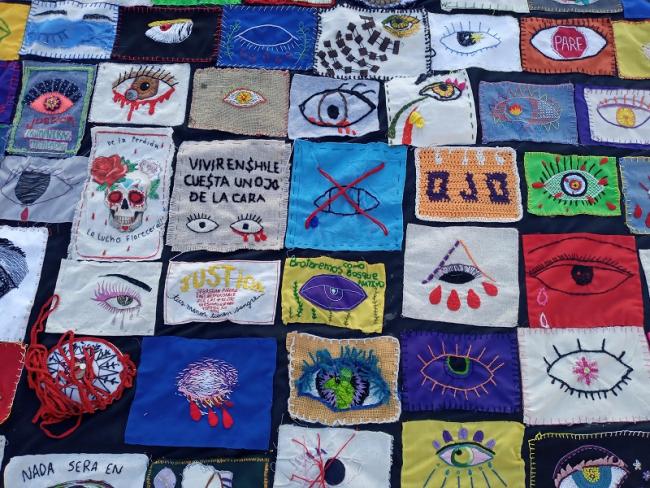 After five months of continual mass mobilizations, the Chilean estallido, or uprising, came to a sudden interruption in mid-March due to the coronavirus pandemic. President Sebastián Piñera declared a state of emergency on March 18, granting authorities the power to instate curfews and restrict public gatherings. A week later, Congress postponed the Constitutional referendum—a historic vote that many see as a relative victory in the calls for structural change—to October 25, although this date is still tentative.

Chileans active in the historic protests have continued to agitate despite the restrictions on mobility and demonstrations. Besides setting up barricades and protesting in public spaces, communities are responding to the latest contingency with grassroots tactics that echo those used during the Chilean dictatorship (1973-1990). One of these practices is the arpilleras, or political tapestries, which relatives of detained and disappeared people and women from poor, working-class neighborhoods created to sustain their families, while denouncing the state violence and economic precarity that they faced during the military regime.

After proliferating in the context of the uprising, arpillera collectives have remained active during quarantine. “There is a strong feeling that one thing is to have to stay at home and another very different is to demobilize,” said Ana Clara Araya, who has gathered to create arpilleras with a group of neighbors in Villa Frei since the early days of the uprising.

From Mass Uprisings to Lockdown

While most people agree that special measures are necessary to address the alarming spread of the virus, the priorities of the government and its competence to face the crisis have been called into question. Former Health Minister Jaime Mañalich came under fire after admitting on live television that he was unaware of the conditions of poverty and overcrowded housing in some sectors of Santiago. His ignorance was particularly unacceptable in the context of the mass demonstrations, where housing demands have been articulated under the banner of vivienda digna, or dignified housing. Facing mounting pressure and a lawsuit for criminal negligence, Mañalich has since stepped down.

The state could have used the emergency situation to address demands voiced during the protests, which are now essential to keeping people healthy and safe. Instead, one of the state’s first responses was to erase the footprints of the estallido, painting over graffiti and removing wooden statues that were erected during the uprising in honor of Chile’s Indigenous peoples.

The government was also quick to pronounce an employment protection law in early April, effectively subsidizing private corporations with workers' unemployment savings. But it was well into May when the government began distributing food and enacted an emergency family fund and minimum wage warranty subsidy. The long-term economic impact of the health crisis has yet to be seen, as the IMF projects a GDP decrease of 4.5 percent this year, the biggest drop in the country since the 1980s.

In the meantime, many people cannot afford to stay home or perform basic sanitary measures and social distancing.

The increasing inequalities exposed during the coronavirus pandemic have compounded social and political tensions, which were already on edge since the beginning of the protest movement. Forced to choose between their health and their livelihoods, some people have continued to protest in different forms regardless of the quarantine.

Demonstrations in historically marginalized communities have denounced that people are going hungry and the lack of aid from the government. Protesters are often met with police repression.

Communities are also organizing ollas comunes (soup kitchens) to feed themselves, as they did in the harshest years of economic crisis during the dictatorship. The community networks behind them—many of which emerged or were strengthened during the estallido—are also responding to the newest contingency by organizing pharmacy runs for the elderly and patrols to accompany and support victims of domestic violence.

Like soup kitchens, making arpilleras is a practice of resistance associated with the dictatorship era that has flourished in contemporary Chile.

Although their creation for sale and exportation declined at the end of the dictatorship, embroidery circles and political tapestries have re-emerged and proliferated since the estallido. Arpillera makers have thematically and stylistically adapted the textile tradition to match the current social and political context.

Unlike their predecessors in the dictatorship, who often created their tapestries in secret for fear of retribution, the women who make arpilleras today can be seen stitching together in public parks and plazas, their work displayed in streets or at the head of marches.

That was until the state of emergency began in mid-March, when arpilleras vanished from the boulevards along with the masses.

Erika Silva is a member of Memorarte, an arpillera collective that has been actively denouncing the violence of post-dictatorial neoliberalism since before the uprising. She explains that the current situation poses challenges to their practice, because they mostly do community embroidery. “I like what happens when we are together, especially when we make collective pieces,” she says.

Regardless of the limitations, neither Memorarte nor other arpillera collectives have been idle during the quarantine. Fabricated with easily accessible materials that most people have at home, making arpilleras is a suitable practice to stay active and engaged during the pandemic. Just as textile crafts have proliferated around the world as people make face masks or turn to knitting and crocheting to pass the time, arpillera practices have spread. Online workshops pop-up in different platforms, introducing participants to the tradition and inviting them to experiment with the medium. Tamara Marcos, a Chilean embroidery teacher quarantining in neighboring Argentina, says that the online workshops allow their participants to resist isolation, “They are an excuse to continue creating community.” 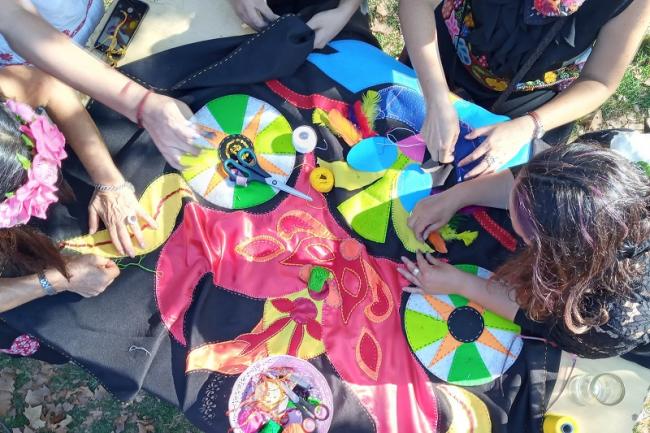 Unlike fashionable crafts associated with mass consumption and utilitarian crafts intended to be worn, as in the case of masks and dressmaking, arpilleras are intended to be explicitly political, or at least visually reflective of the ongoing times. Arpillera makers and collectives draw on this tradition and continue the work that unites them since the estallido, with the slogan of coser y bordar, otra forma de luchar (sewing and stitching, another way of fighting). They have taken to social media to re-circulate old tapestries that resonate with the current circumstances, highlighting the underlying structures that worsen the health crisis.

New arpilleras are also emerging that denounce the state’s response to the pandemic, and other systemic issues highlighted by the crisis, like racism against Haitian migrants and oppression of the Mapuche people.

As during the dictatorship, the arpilleras of the quarantine also document the soup kitchens that are found in communities throughout Chile, providing a testament to the resilience and creativity that has historically characterized the country’s grassroots organizations. Cynthia Imaña, a prolific textile artist and member of Memorarte, said, “The arpilleras of the quarantine send a message of hope and resistance.”

Paula Rodriguez, who has been busy making and teaching arpillera workshops during the quarantine, agrees, adding that the lifeline provided by arpillera give many the hope that they will meet again in the streets once this is over.

As of July 6, the Chilean government has confirmed 298,557 COVID-19 cases and 6,384 deaths, as Latin America remains the latest epicenter of the pandemic. While the Southern Hemisphere settles into the winter months, hospitals in Santiago and around the country are overwhelmed, providing a tragic display of the consequences of meager public spending in the health sector, which hampers medical services even in “normal” times.

While Piñera’s approval ratings are up after haven fallen as low as 6 percent in the midst of mass mobilizations, and his government has tried to seize the pandemic to erase the vestiges of the estallido, people continue to fight with bricks, barricades, soup kitchens and political tapestries. Instead of silencing or distracting the people, the real concerns of contagion, poverty and hunger have propelled community action, continuing a historical legacy.

The months ahead will test the limits of Chilean healthcare and the neoliberal system more generally, as well as the resilience of the social movements calling for their transformation. In the meantime, as in the past, grassroots organizing, including creative practices like arpilleras, is providing a safety net for self-preservation and community subsistence. The practice prevents the social fabric that was woven during five months of mass mobilizations from unraveling.

Nathalia Santos Ocasio is a PhD candidate at Queen's University, Canada, researching the afterlives of arpilleras and their role in the current political landscape.