The pandemic put anticipated legislative progress on Argentina’s abortion reform on hold, but activists are determined to keep up the momentum. 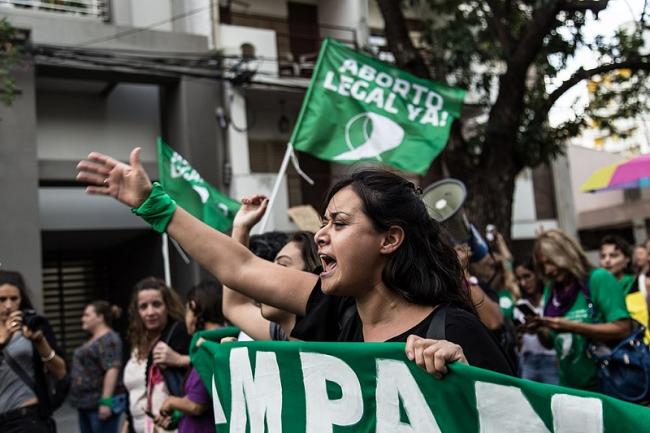 Early in 2020, it appeared that the legalization of abortion was, at last, imminent in Argentina. After a long struggle by activists, the elements of a strong movement, favorable public opinion, and sympathetic allies in power all aligned in favor of finally reforming the 1921 criminal code that allows a legal abortion only under the narrow circumstances of rape or a threat to a woman’s life and health. Following last year’s general elections, support permeated the halls of power: a multi-party coalition in Congress, the presidents of the Senate and lower house, the heads of the congressional commissions charged with discussing the bill, and even the president of the country all supported reform.

But then, in early March, Covid-19 reached Argentina. The government declared a lockdown, and everything stopped—including the prospects of abortion reform.

The need for abortions, however, did not stop, and nor did the women’s movement. While the movement seems to still be mulling the best path forward amid the ongoing pandemic, one thing seems clear: the historic momentum won so far cannot afford to slow.

Two years ago, Argentina witnessed its first ever congressional debate to legalize abortion on demand. On June 14, 2018, the lower house passed the bill by a narrow margin of four votes. On August 8, however, the Senate rejected the bill by seven votes.

Hugs and tears filled the square outside Congress after the vote. The rejection was bittersweet. On one hand, victory had seemed within reach after the lower house win, so frustration ran high. However, activists also acknowledged that what they have done was unprecedented. Every two years since 2008, the Campaign for Legal, Safe and Free Abortion—which celebrated its 15th anniversary in May 2020—presented its bill to legalize abortion on demand in order to keep the bill from losing parliamentary status. While the bill gained increasing support over the years, it only made it onto the congressional agenda in 2018.

The vote then took place after one of the longest congressional discussions in history of any issue, with more than 700 presentations from civil society experts from many fields. Scenes of the massive demonstrations outside Congress, made green bandanas synonymous with abortion reform and fueled a “Green Tide” not only in Argentina but across Latin America.

After the 2018 debate, most activists reached the conclusion: “We lost in Congress but we won in the streets.” Argentine society had decriminalized abortion. Congress was just a step behind, and sooner or later, it would have to catch up.

One of the main obstacles for abortion reform has been the personal opposition of the office of the president to its legalization, even among left-leaning governments. This was the case with President Cristina Fernández (2007-15), who, despite supporting sexual and reproductive rights overall, opposed the legalization of abortion during her two mandates. In 2018, President Mauricio Macri (2015-19), the head of a center-right coalition, surprisingly included abortion reform in his government’s agenda. However, he publicly stated his believe in the protection of life from the moment of conception, veering his legislators to vote in that direction.

In the 2019 election cycle, Alberto Fernández became the first presidential candidate of one of the main political parties to declare support for legalization. Fernández won the presidential elections and took power in December 2019. In February 2020 he confirmed his commitment with abortion reform and announced plans to introduce a bill in Congress to advance legalization.

On March 8, in the traditional march for International Women’s Day, hundreds of thousands of women congregated near the Congress building to reiterate their demand for legal, safe, and free abortion. President Fernández had strategically decided to wait until after this demonstration to announce the content of his bill to avoid any criticism in the march.

Speculation and suspicion ran high within the movement: What was Fernández hiding? Why was the government drafting its own bill and not supporting the bill written and shaped by the movement for over 15 years? Was he going to introduce a bill to decriminalize or legalize? The former would simply remove abortion from the criminal code, while the latter would see the state guarantee its provision. Fernández had stated that, alongside the abortion reform bill, he would introduce a parallel bill to launch the “1,000 days plan,” a program to guarantee the health and integral care of pregnant women and young children. Activists interpreted this move with caution amid concerns about potential negotiation between the government and the Catholic Church.

Having a left-leaning party in government that supports the movement’s demands opened up political opportunities that had been unthinkable before. However, in practice, working together remains a challenge. Despite a common goal of advancing abortion reform, the position of each actor in the political system—either inside or outside of government—creates different interests and motivations. The fear of co-optation has been strong among all social movements in Argentina, and particularly among a movement that has long been highly independent of political parties and governments and has thrived in its autonomy.

In any case, Covid-19 put the speculation and anticipation on hold. As the number of cases grew, the government turned its attention to the pandemic and suspended the abortion reform agenda, along with everything else. Anti-choice spokespersons even analyzed this moment as a punishment from God: “They wanted to legalize death and death came to visit them,” one conservative lawmaker tweeted.

The Movement Gets Creative in Quarantine

Even in cases when abortion is legally allowed under Argentina’s current legislation, it is not always accessible due to an uneven application of the law and an overwhelming presence of conscientious objectors in many hospitals. During lockdown, obstacles to access only increased.

While the government declared abortion provision an essential service, the reorganization of hospitals to prioritize Covid-19 cases resulted in the closure of many neighborhood health centers and increased barriers to getting appointments for ultrasounds. Anti-choice forces took advantage of this environment to continue denying access to reproductive rights. The restrictions on circulation, including the need for permits to use public transportation, added an extra burden.

To fight these obstacles, a network of pro-choice health providers, the Red de Profesionales de la Salud por el Derecho a Decidir, began posting weekly updates on its website detailing which reproductive services were open and still accessible. At the same time, self-managed medicated abortions are needed more than ever. Socorristas en Red—a feminist collective that has been providing information and support to women who want to interrupt their pregnancies since 2014—has seen demand for their services increase. The organization mostly supports self-administration of misoprostol, and while their practices had to change—video and phone calls replaced in person meetings to discuss each person’s situation—they continue to offer this support. Since March 21, when the quarantine began in Argentina, they have supported 3,838 people who wanted to interrupt their pregnancies.

The Campaign for Legal Abortion has continued its activities online, mobilizing members virtually. On June 13, the Campaign celebrated the two-year anniversary of the historic vote in favor of legal abortion in the lower house of Congress. In an online forum, many activists expressed their desire to see abortion reform discussed and passed in 2020. They stated they do not need to wait for the Fernández government’s bill to begin the congressional discussion—the Campaign’s bill already has parliamentary status. Yet some activists are still hesitant to demand a remote congressional debate for their bill, given that the presence of demonstrators outside of Congress during the 2018 debate was considered central to pressure for legislators’ support in the plenary session.

However, activists are aware that the discussion of the bill cannot wait, so a remote session of Congress might be the only way abortion could still become legal in 2020. The likelihood of face to face sessions in Congress during 2020 seems low. While Argentina was on a path towards controlling the virus through an early and strict lockdown, the flexibilization of the quarantine in June brought a spike of cases in the city of Buenos Aires and surrounding areas, which prompted the government to reverse the reopening in early July. The conditions are otherwise favorable. With the extensive and in-depth debate that happened in 2018, lengthy presentations in each chamber will likely not be necessary. And this time, having the support of the heads of the legislative commissions, the presidents of both chambers of Congress, and President Fernández, will mean the bill will be able to move at a speed that was unimaginable before.

If the bill passes, Argentina will become one of the first Latin American countries to introduce such a progressive abortion law. Currently in the region, legal abortion on demand is available only in Cuba, Uruguay, Mexico City, and the Mexican state of Oaxaca. As was the case in 2010, when the passage of same sex marriage legislation in Argentina spurred similar congressional debates in many countries across the region, the abortion reform is expected to have strong reverberations throughout Latin America.

Cora Fernández Anderson is an Assistant Professor in Comparative Politics at Mount Holyoke College. She is the author of Fighting for Abortion Rights in Latin America: Social Movements, State Allies and Institutions (2020).