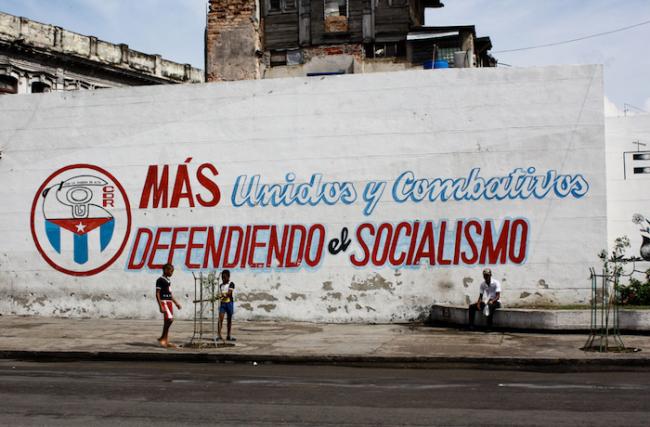 In 1959, the Cuban Revolution set in motion a series of radical reforms that completely upended the island’s economy and politics and reverberated around the globe. Cuba’s nationalization of land, agriculture, and U.S.-owned companies one year later stoked unbridled U.S. antagonism that by 1962 resulted in the U.S. imposition of an embargo on the Cuban economy.

Sixty years later, despite periodic attempts at rapprochement between the two governments, the embargo remains in place and it is clear that U.S. policy toward Cuba has failed. Despite causing an inordinate amount of suffering and poverty on the island, the embargo did not interrupt Fidel Castro’s rule at any point. It has not provoked the internal destabilization and modification of the political system that the U.S. government had hoped for. And it has failed to inhibit the continuation of socialist policies on the island. As this suggests, U.S. policy toward Cuba is critically misguided.

To improve relations with Cuba, U.S. politicians must first develop a foreign policy guided by tenets of respect, cooperation, and mutual assistance. This would invariably mean rolling back resurgent political extremism, reminiscent of the Cold War era, recently pursued by the U.S. administration, including the tightening of the embargo in concession to the Florida lobby—a right-wing voting bloc of hardliners who hold disproportionate influence over political matters on Cuba. In many ways, people in Cuba have benefitted from the country’s expansion of social and cultural rights and have worked in support of the revolutionary agenda. This support for socialism in Cuba is also key to the failure of U.S. regime change policy. If they wish to mend relations, U.S. politicians must recognize this reality and accept the history that Cubans have chosen for themselves.

A Long Tradition of Socialism

For six decades, successive U.S. administrations have sought to “liberate” Cuba from Communism—a goal implicitly premised on the idea that Cuba’s left-wing regimes have been forcefully imposed on the island by Fidel Castro, a coterie of loyalists, and their Soviet allies. The continued failure of the United States’ “liberation” program, however, raises serious questions about the fundamental assumptions guiding U.S. foreign policy toward the island.

From the U.S. intervention into Cuba’s War for Independence against Spain in 1898—which essentially turned the island into a U.S. protectorate for 30 years—until the 1959 revolution, U.S. engagement with Cuba primarily focused on safeguarding the region for capitalist investment. In protecting its financial interests in Cuba, the U.S. also made sustained efforts to contain the spread of progressive and anti-racist legislation emerging from decades of anti-colonial struggle.

Socialism in Cuba dates back to the late-19th century and developed alongside its quest for national sovereignty. By the time Fidel Castro announced in April 1961 that the island would pursue an explicitly socialist model, Cubans had already spent decades debating how to implement radical, anarchist, and socialist practices.

A number of Cuba’s most recognized intellectuals had long expressed admiration for socialist ideals. Diego Vicente Tejera, an influential poet, thinker, and politician, founded the island’s first socialist party in 1899. Martín Morúa Delgado, who became one of Cuba’s most prominent liberal leaders after the Republic’s founding in 1902, wrote positively about socialism and its reformist variants. And though José Martí, Cuba’s most famous intellectual, was not explicitly socialist, he regularly conveyed admiration for the U.S. socialist economist Henry George, who notably advocated high taxation and the socialization of land. Cuba’s intellectuals and Independence leaders were not afraid of socialist ideas, and differences notwithstanding, their platforms almost all contained elements of socialist thought.

A dynamic socialist culture also emerged among Cubans who migrated to the United States even before the turn of the century. The movement of Cuban tobacco workers from Havana to southern Florida resulted in intellectual, financial, and cultural flows that helped the ideas of “revolutionary socialist” labor organizations in Cuba, like Alianza Obrera, become major currents within the Cuban labor movement in Florida.

The infusion of socialist tendencies across Cuban politics pushed the struggle for Cuban independence from Spain further left and made concrete political gains. Cuba’s 1901 Constitution—a product of extensive dialogue waged during the Wars for Liberation—was imbued with progressive demands. It enshrined, for example, one of Latin America’s first universal male suffrage laws, critically granting voting rights to African and formerly enslaved men. With the approval in 1901 of the Platt Amendment, an extension of the 1823 Monroe Doctrine that allowed the U.S. to intervene in Cuba whenever it saw fit, the U.S. government tried unabashedly to contain the tendencies toward what Cubans saw as social progress coming out of Cuba’s Independence Movement.

Socialist ideas gained greater traction in Cuba after the 1933 revolution, which overthrew U.S.-backed dictator Gerardo Machado. In the post-revolutionary period, different varieties of socialist thought competed with tenets of social liberalism and nationalism for support among the Cuban electorate. During the Cuban Republic (1902-1958), three major political parties emerged from the nationalist, democratic, and socialist intersections of political praxis: the Partido Revolucionario Cubano (Auténtico) and the Partido del Pueblo Cubano (Ortodoxo), which both represented Cuban-style social democracy; and the Soviet-inspired Partido Comunista de Cuba (PCC) founded in 1925. A fourth group that consisted of left-wing democratic socialists developed outside the framework of official party politics. The liberal Auténticos governed for several years on a strong mandate to redistribute wealth and grant social rights. In years when the Communist Party was legally allowed to operate (1938-1953), it held seats in Congress, participated in the 1940 convention to write a new Constitution, and successfully canalized growing worker discontent with the state of economic, social and political affairs in Cuba.

As the most important mass party in Cuban politics, the Ortodoxo party’s liberal and nationalist platform was, as with the Auténticos, imbued with social justice language that emphasized wealth redistribution. Across rural Cuba, the spread of socialist ideas became apparent in the 1930s, when workers seized dozens of sugar mills from their owners and replaced them with worker controlled governing councils, known as soviets. Meanwhile, in the mountainous regions of eastern Cuba, peasants and small farmers, many of them Afro-Cuban and communists, rose up in arms against state-backed guardsmen who attempted to evict them from their land. In this struggle, a rural communist movement developed organically, rooted in the resistance to land dispossession and racial discrimination. Although not all of these groups self-identified as socialist or communist, opponents attempting to curb the growth of radical movements in the countryside categorized them as such. As the above examples suggest, several distinctly Cuban forms of socialism had developed across the island well before the 1959 revolution.

Julio César Guanche Zaldívar is a lawyer, historian, and social scientist affiliated with the National Union of Writers and Artists of Cuba (UNEAC). He was professor at the University of Havana for more than a decade and has served as visiting professor at Harvard and Northwestern Universities. Author of numerous books and articles, he was a visiting scholar in 2019 at the Max Planck Institute for European Legal History in Frankfurt, Germany.