On Nicaragua’s Caribbean coast, Black and Indigenous forest rangers take environmental protection into their own hands. 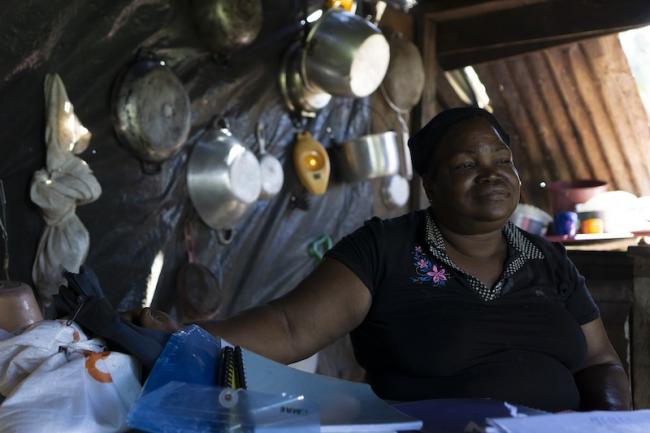 Caribbean soca rhythms and Mexican country ballads blend as they blast out of people’s homes on a hot and humid early afternoon in Greytown, Nicaragua. Absent the hum of car engines in the remote, small town, the sounds cut through the air. The voice of a Canal 10 news anchor also drifts into the street, walking people through the latest political tension in Managua, the capital. Despite the distance some 200 miles away from the epicenter of the country’s recent crises, the stress of political crackdown seems to reach the edge of the forest.

Greytown, called San Juan del Norte in Spanish, just finished lunchtime—a diet of freshly caught fish and cultivated staples, such as corn and beans, along with coconut-infused rice—and now people anxiously await the arrival of the community’s self-organized forest rangers. When the guardabosques come home, locals are sure to have fresh news from the forest that surrounds them—a forest that is shrinking daily.

One by one, the rangers arrive on foot or by bike to the meeting point in front of the home of a local Afrodescendent Kriol leader. Kriol and Rama Indigenous authorities legally govern the southern Nicaraguan Caribbean coast, but lately, the authority of President Daniel Ortega’s Sandinista party has felt omnipresent.

Wedged between the San Juan River that winds along the border with Costa Rica, the Caribbean Sea, and Central America’s largest bioreserve, Indio Maíz, Greytown is only accessible by boat. Approximately two vessels arrive every day, transporting locals and regular shipments of canned food and drinks. A trip from the entrance of the reserve to Greytown takes sleepy passengers about seven hours on the fastest public motorboat available.

Looking tired and dressed in rugged clothing, the forest rangers share their findings with the local Indigenous and Afro-Caribbean authorities gathered in front of the house under a cloudy sky. But for the past few years, it’s been the same report: fewer trees, more settlers.

“Every time we enter the reserve, we see that more forest, savannahs, and meadows become cattle ranches,” José Velásquez, one of the rangers, said.

Velásquez joined the group when local Indigenous and Afro-Caribbean authorities formed it in 2015 in the face of what they saw as state divestment from forest monitoring. For five years, two teams—one composed of Black Kriols, the other of Indigenous Rama—have headed into the reserve for two weeks each month to monitor the wellbeing of Indio Maíz’s plants and animals. 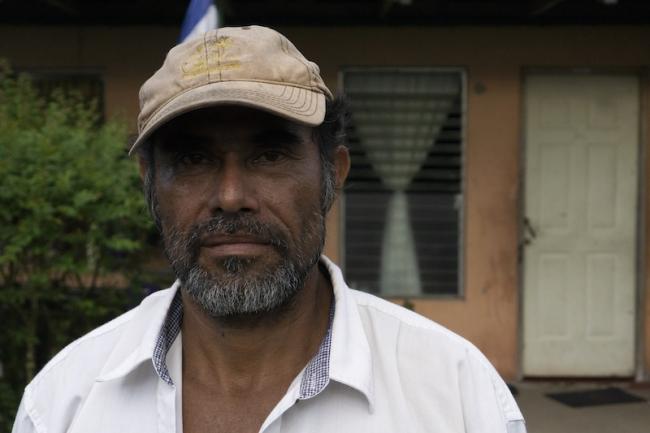 Spanning about 1,000 square miles, Indio Maíz is considered one of Central America’s most well-preserved biospheres, home to a wide array of wildlife. Hundreds of bird species—including toucans, parrots, and hummingbirds—as well as deer, sloths, jaguars, monkeys, turtles, iguanas, manatees, and venomous frogs live under the forests’ trees, representing 70 percent of Nicaragua’s biodiversity. However, locals most often mention the wild boars, which they hunt, tapirs, which are becoming extinct, and snakes, which are deadly. Greytown’s own “pet,” a crocodile named Juancho, has been paying less frequent visits to the pier due to lower waters than usual. Drier weather is to blame.

But lately, the rangers spend more and more of their time trying to reason with new settlers flocking to the reserve from other parts of the country in search of farmland. Human activity is prohibited inside the reserve, but roughly since 2013—the year Nicaragua signed a deal with a Chinese company to build an interoceanic canal that would slice the country in two—farmers who clear land to build homes or to sell to other settlers have multiplied, while law enforcement has dissolved.

The reserve, 70 percent of which falls within autonomous Indigenous and Afrodescendant territory along Nicaragua’s Caribbean coast, burst into the headlines in 2018 when wildfires broke out, fueling the start of mass anti-government protests. Since then, Ortega has tightened his grip on power through authoritarian means, while settlers have cleared trees in Nicaragua’s reserves at an accelerated rate. For the Rama and Kriol people, losing the forest means losing their hard-fought political autonomy and their ancestral way of life.

Nicaragua does not appear in top global rankings of absolute deforestation rates, usually headed by larger countries such as Brazil, the Democratic Republic of Congo, or Colombia. Yet, in terms of relative tree loss, the heart of Indio Maíz lost 52 percent of its tree cover between 2000 and 2018, while 1.9 percent of the Brazilian Amazon disappeared during that period.

For Levi Sucre Romero, a Bribri Indigenous person from Costa Rica and coordinator of the Mesoamerican Alliance of Peoples and Forests (AMPB), Central American forests aren’t getting enough attention. “In this whole issue of climate change, international cooperation and investment have become more focused on the large forest masses, for example, in the Amazon, in Asia, [and in] Mexico,” Sucre told me. “And places like Central America have become totally invisible, as if there were no forests here.”

Between 2011 and 2016, forests the size of more than 95,000 soccer fields have disappeared each year in Nicaragua, according to a study by the local environmental nonprofit Centro Humboldt. Trees have been cut at an accelerated rate since 2018, the year anti-government protests broke out, according to local Indigenous and Afro-Nicaraguan leaders. Centro Humboldt has predicted that at this pace of deforestation, Nicaragua’s natural forests could be gone by 2028.

Research shows that protecting forests represents a quarter of countries’ planned emissions reductions as pledged in the Paris Agreement. Conversely, less tree cover means more carbon dioxide in the atmosphere, and by a cumulative effect, trees have also been losing their capacity to absorb greenhouse gases. Indio Maíz is listed as one of Mexico and Central America’s so-called five great forests, which altogether store 50 percent of the region’s carbon. 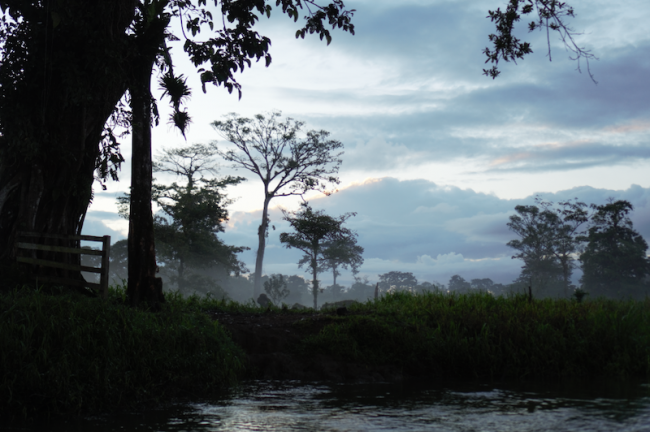 Roman Leupolz-Rist, an economist with the Nicaraguan think tank FUNIDES, argued that countries worldwide—especially the large greenhouse gas emitters—“must urgently invest in mitigation measures to reduce greenhouse gas emissions and finance carbon sinks, such as the conservation and restoration of forests in Indigenous and Afrodescendant territories.” In Nicaragua, as in the rest of Central America, these carbon-absorbing forests are mainly located on Indigenous and Afrodescendant territories. Studies show that Indigenous peoples with legal titles to their land are key in protecting tropical forests. They are therefore necessary partners in global efforts to mitigate climate change.

The rules for cattle ranching vary by region in Nicaragua, but in Indio Maíz, the law is clear: Any alteration of the forest is prohibited. In 1990, the first Sandinista government declared Indio Maíz a biological reserve. Then in 2003, UNESCO recognized Indio Maíz as the core zone of Río San Juan Biosphere Reserve, implying that any human activity—besides research and monitoring work—is forbidden.

Reserve protection relies on close coordination between Rama and Kriol authorities and Ortega’s administration, because Nicaragua developed a sophisticated co-governance system between the central government in Managua and Indigenous and Afrodescendant authorities.

Over decades, Kriol and Rama people have honed their legal rights over these lands. In 1987, Nicaragua recognized the autonomy of the peoples of its Atlantic Coast, granting them control for roughly a third of Nicaragua’s territory. In 2002, a new law further defined Indigenous and Afro-Caribbean peoples’ legal rights to collective ownership.

By law, the territorial Rama and Kriol government (GTRK), which represents all nine local Indigenous and Black communities of the southern Atlantic Coast, has enforcement powers and self-determination over its communal lands. According to GTRK governance, as a general rule, any non-Indigenous person who came to live in the reserve after 1987 must leave. Yet, despite the regulations, it is now common to see cattle instead tapirs, the forest rangers report.

Melissa Vida is a multimedia freelance journalist with bylines in The New York Times and El Faro, editor at Global Voices, and filmmaker of the documentary on Oscar Romero Resucitaré. For weekly news and suggestions on what to read about Central America, subscribe to her team’s newsletter “Central American News.”