Ecosocialism from the Margins

Hope for revolutionary change requires urgent climate action now. The energy transition must be as radical as possible to ensure the conditions for future struggles to overcome capitalism. 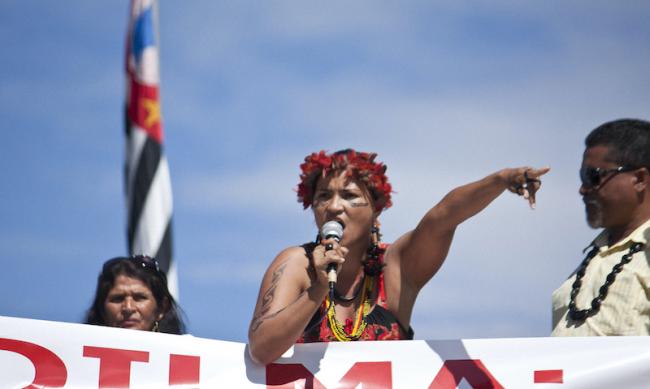 The 21st century is a century of crisis. Capitalist economic collapse dovetails with dire inequality, international and civil wars drive displacement and humanitarian catastrophe, xenophobia creeps into laws, and rising biodiversity loss imperils the planet’s equilibrium. Climate change threatens to worsen every other aspect of these interlocking crises, making decarbonization the most urgent task on our to-do list. It’s hard to fathom successfully tackling all other socioeconomic problems—let alone the gargantuan undertaking of overcoming capitalism—without coordinated international action.

A deep civilizational change, as Michael Löwy puts it, is needed to craft a truly just and free society within the ecosocialist paradigm. Such a transformation will not be possible unless we guarantee the material conditions on which to build any and all revolutionary prospects. Ecosocialists are well aware that only a revolutionary path can take us beyond the capitalist system. But they also understand that other clusters of change and reforms must garner support in their radical forms before a pre-revolutionary scenario appears on the horizon.

Climate scientists agree that we must take radical action by the end of this decade to prevent global temperatures rising over the 1.5°C limit. Leftists organizing around ecological issues share a similar consensus, but the situation changes when we consider the Left more broadly. As I write from Brazil, it is evident that the far-Right’s recent gains in the continent put everyone at risk of sinking deeper into climate emergency. The Bolsonaro government is openly anti-environment—he is even intent on allowing industrial mining in Indigenous territories. When nature is perceived only through the lens of exploitable natural resources, biodiversity becomes easily commodified. It is no coincidence, then, that the largest and most impactful social movements in Latin America are tied to land and territory, environmental protections, food sovereignty, and a strong opposition to multinational corporations, foreign investment, and their history of harmful dealings with right-wing—and sometimes moderate left— governments. These movements demonstrate that ecosocialism must be based on praxis. Those suffering the most from capitalism’s exploitation know all too well that full commodification of nature means private profits and socialized impacts.

Political projects rooted in developmentalist and productivist ideologies are still common in socialist circles. Many in the progressive and even socialist Left in the countries at the periphery of capitalism, or the Global South, perceive their development and lifting millions out of poverty as antithetical to a rapid, clean energy transition and climate action. Current resources only enable one or the other, their logic suggests. However, even if developed countries take the lead by zeroing out their carbon emissions and helping finance an energy transition in the South, a true great transition depends on fostering and organizing peripheral countries’ will to change as well. Those who have contributed the least to the crisis are most likely to suffer the deepest impacts. This contradiction makes social movements, collectives, unions, and political parties at the margins of capitalism important voices in the call for change. It is paramount that we listen.

Building Ecosocialism in and from the South

Ecosocialism, a recent development in socialist history, first emerged to tackle modern environmental issues, as articulated since the 1970s. It promoted a critique of productivist perspectives and experiences within socialism, proposing that the socialist view of abundance prioritize quality over quantity. Later, in what political economist Kohei Saito calls the second stage of ecosocialism, the tradition incorporated the foundations of Marxist Ecology and Karl Marx’s critique of capitalism’s metabolic rift. This perspective offers a Marxist analysis of the profound way the current mode of production has altered nature, explicitly identifying that it is impossible to confront the ecological crisis—also a crisis of human society—within the capitalist system.

Now, the third stage of ecosocialism is being built from praxis that deals with the contradictions from the current system, pushing for alternatives to begin right away. Within this conversation, dispossessed peoples at the margins of the system have a lot to teach us in terms of values and organizing practices. As the far-Right advances in Latin America, it is valuable to understand how grassroots campesino, Indigenous, and ecosocialist movements have boldly denounced human exploitation as inseparable from the exploitation of nature. Pushing for radical alternatives, these marginalized groups ought to be protagonists in constructing ecosocialist praxis.

In contrast, the ecocapitalist way, also known as “green economy” solutions, proposes a false path for protecting the environment. It aims to reverse some of the impacts of climate change while maximizing profits through the creation of new markets and the generalized commodification of ecological transition. Institutional spaces tasked with negotiating the terms of climate change mitigation have normalized ecocapitalism, including by promoting the market-friendly REDD+ approach to forest management and carbon trading as solutions, by encouraging the participation of business and industry NGOs in UN climate change events, and by supporting the idea that the private sector ought to be a crucial—if not the crucial—partner in reducing emissions. The result has been a very slow crawl toward decarbonizing energy, amounting to less of a proper transition than a diversification of the private and public infrastructure of energy provision.

This is particularly evident in countries that have promoted new investments—both public and private—in renewable energy sources while continuing to exploit dirty fuel in the name of trade and economic growth. For example, in January 2020, Germany announced a plan to phase out coal, but the end date is 18 years from now. China has grown its solar and wind capacity steadily for years, but investment recently dropped due to cuts to public subsidies. China also has invested in hundreds of new coal plants at home and abroad. Meanwhile, the private sector is eager to market itself as the provider of “clean” energy, a variation of what anticapitalist activists have long slammed as greenwashing. Elites are cashing in on the renewable energy market— expected to hit a global value of $1.5 trillion by 2025—by selling technology to governments and private citizens.

Sabrina Fernandes is an ecosocialist activist based in Brazil. She is the lead editor for Jacobin Brasil, a postdoctoral fellow at the International Research Group on Authoritarianism and Counter-Strategies of the Rosa Luxemburg Stiftung and the University of Brasília, and she runs the radical left YouTube channel Tese Onze.