Fighting for a Just Transition 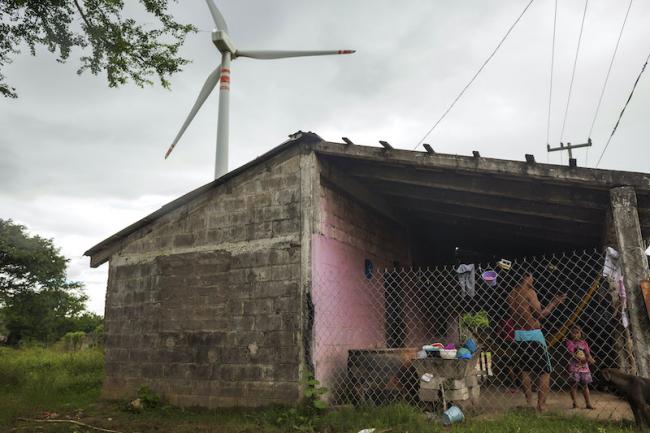 “Have you seen the maps?” Rodrigo fiddled nervously with the items on his desk. He rolled closer to his keyboard and typed in the URL. The website, geocomunes.org, elaborated the point Rodrigo and his colleagues at the Articulación Yucatán had been gently trying to explain to me for the past week: The Yucatán Peninsula was under assault.

With each click, my soft-spoken colleague and friend revealed a layer of a landscape pocked with development plans, ranging from wind and solar projects to the proposed Maya Train, designed to snake across the peninsula. The GeoComunes collective works with local communities and grassroots organizations to illuminate issues of environmental degradation, land privatization, and dispossession as a result of infrastructure development. The group uses publicly available information to create intricate maps, such as one of the Yucatán Peninsula charting five elements: 1) the expansion of megaprojects; 2) infrastructure development, including highways, electricity transmission lines, and pipelines; 3) urban expansion, including the growing tourist footprint in the Riviera Maya, home to Cancún, Playa del Carmen, and Tulum; 4) industrial agriculture including sugar, palm oil, sorghum, and soy production, as well as pig and chicken farms; and 5) energy projects.

The map told a story. The energy problem that had brought Rodrigo and me together as scholar-activists in 2016 had mushroomed into a development problem that now implicated multiple facets of life: water resources, biodiversity, cultural heritage, and, it seemed, the survival of the peninsula. In the span of a few years, developers and the politicians that facilitate private development had begun to dismantle the centuries-old system of communal and social land ownership to convert it into private property. The attacks came from industries from agriculture to transportation to energy. The proposed and current developments—megaproyectos—appeared indiscriminate and ill-conceived. Their chosen routes cut through dense jungle, protected territory, and complex ecosystems long held sacred by the Mayan communities that populate the entire peninsula. But, as with most stories, it’s complicated.

Renewable energy projects, too, are caught up in this complexity, and the fight for climate justice must confront the contradictions of unjust clean energy development. Simply accelerating the existing pattern of renewable energy construction in places like the Yucatán Peninsula would not only exacerbate inequality, but also preclude broad alliance-building between Indigenous communities, workers, and other sectors that could amplify efforts toward rapid decarbonization.

The region’s ambitious development builds on a centuries-long history of powerful interests dispossessing Indigenous farming communities around Mexico. I first began to explore this dynamic as a legal scholar in 2010, after having spent much of the prior year living in the southern Mexican state of Oaxaca. Home to 16 Indigenous groups that speak distinct languages, Oaxaca is one of the most ethnically diverse states in Mexico. It is also one of the poorest, tied with Guerrero as second only to Chiapas, according to 2018 government statistics. Located east of Guerrero, west of Chiapas, and south of Veracruz, Oaxaca’s rugged coastline hugs the Pacific Ocean. And in the Isthmus of Tehauntepec—the narrow strip of land in the state that separates the Pacific and Atlantic Oceans—the wind blows at a near constant rate.

In the 1990s and early 2000s, the Mexican government, with technical assistance from the World Bank and U.S. government, began to experiment with wind power. In 2003, the National Renewable Energy Lab (NREL), part of the U.S. Department of Energy, assessed Oaxaca’s wind energy potential, finding it was among the windiest places in the world.

Once government officials and private entities understood the vast wind resource, they descended on the Isthmus. The first experiments with wind energy were small-scale, government-owned and organized pilot projects designed to attract private investment that could generate a profit. The local residents of the Isthmus—Indigenous farmers and fishermen who rely on the land and sea for their livelihoods—were not part of these conversations.

The government pilot projects proved viable, and since around 2009, multinational entities ranging from Walmart and the Mexican-owned cement manufacturer Cemex to Heineken and Coca-Cola have invested heavily in the development of wind energy resources in the region. Until 2014, when then-president Enrique Peña Nieto signed legislation to open up Mexico’s energy markets for private participation as part of his Reforma Energética (Energy Reform), Mexican law prohibited the private sector from developing energy projects. This restriction meant that private investors like Walmart pursued their early clean energy projects under the autoabastecimiento or self-supply scheme. The self-supply framework allows private companies to generate electricity through a subsidiary or affiliate company that sells the energy back to the parent company. Using self-supply, mega-companies built massive wind farms for their own benefit, without the prior consultation of the Indigenous communities surrounding the projects, forever changing Oaxaca’s landscape. 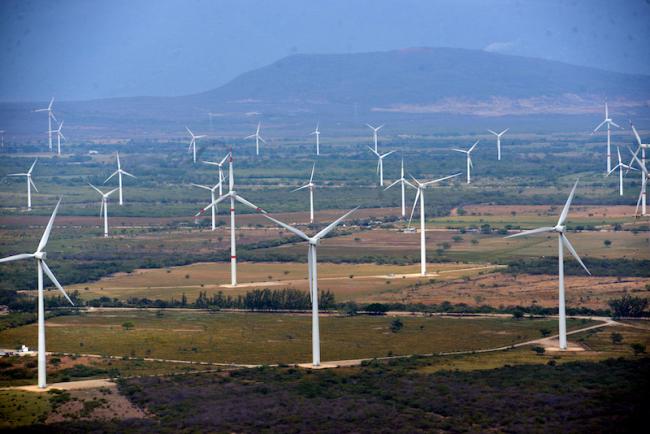 In a relatively short time, wind energy development in the Isthmus increased exponentially. Oaxaca has 31 operational wind energy projects, according to the state government, mostly located in the Isthmus. One of those projects, the 396-megawatt Eólica del Sur, is the largest in Latin America and the Caribbean, with 132 wind turbines stretched across 5,000 hectares. At over 2,400 megawatts, the more than two dozen projects comprise over 75 percent of the country’s wind farms and produce 62 percent of the country’s wind energy. The Peña Nieto government’s plans for an additional 7,590 megawatts of wind power would nearly quadruple the current project footprint.

In the past several years, Oaxaca has come to reflect the wrong approach to clean energy development. For those of us writing and working in the field of energy justice, Oaxaca also illustrates how climate change can be used to justify and reify inequality. Local communities take issue with the scale and cumulative social and environmental impacts of the development, as well as the lack of meaningful consultation with the people affected. The communities residing at the heart of the development have staged protests and organized to stop the projects. Their advocacy has led to death threats against some local leaders and the killing of others. Despite the significant controversy and loss of life, for almost a decade the unbridled development went on unabated while showing few, if any, local economic or energy benefits.

The case highlights the need for policymakers to infuse energy policy with energy justice—the equitable distributions of benefits and burdens—so that equity concerns can be addressed before development occurs. Sadly, many policymakers and even environmental advocates view this approach as a waste of time. They would rather address justice-related issues after handling climate change mitigation. For example, when I pushed a government official in an interview to reckon with the unjust approach to energy development in Mexico, he essentially replied: “Climate change.” The government holds that the urgency of the climate crisis justifies the means of a green transition, regardless of whose rights are sacrificed in the process. This response will reify inequality in the most economically distressed places in the world, like Oaxaca. It will also rationalize the use of government-sanctioned violence to quell resistance to unjust but “clean” development.

Shalanda H. Baker is a Professor of Law, Public Policy and Urban Affairs at Northeastern University, where she teaches courses on energy and the environment. She co-founded and co-directs the Initiative for Energy Justice. She is a 2016-17 Fulbright-García Robles Scholar.