Empty Seats and Full Streets in the Colombian Minga

The Minga, made up of Indigenous, Black and campesino collectives, continued to Bogotá after President Iván Duque left an empty seat when invited to a debate. 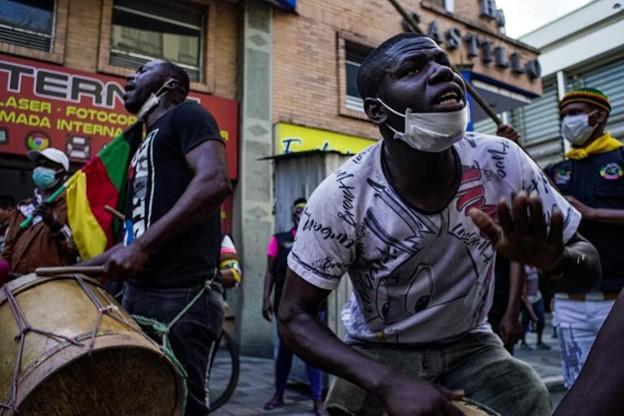 In early October, the Indigenous movement in Cauca put out a call to break the cycle of unfulfilled promises and violence. Within days, nearly 9,000 people responded. The resulting Minga for Life, Territory, Democracy, and Peace was an expression of dissent and a celebration that built on many years of collective struggle.

These Mingas with a capital “M” are oriented around a common objective: rejecting neoliberalism and the destruction of the commons. All of the organizations participating in the Minga have been subject to violence as a consequence of their struggles for social justice. The Minga’s defense of life and peace, therefore, includes demands for the implementation of the 2016 Peace Accords, respect for democracy, and ending the ecologically destructive policies that contribute to forced displacement and dispossession.

On October 12, the Minga for Life, Territory, Democracy, and Peace marched through the streets of Cali towards the People’s Coliseum for a meeting with the president. A few days beforehand, the organizers of the Minga invited President Iván Duque to a debate. Everything was ready: the LED screens, the multicolor lights, the sound system, a long table, and several plastic seats. Delegates from the many organizations supporting the Minga took the stage, and the audience waited. But the president never arrived. 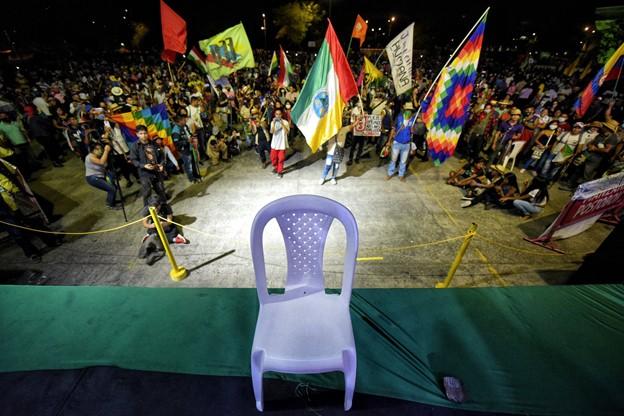 Duque left an empty seat, just as he had a month earlier after dodging blame for the state repression of protests against police brutality in Bogotá that killed 12 people and injured more than 200. He also left an empty seat in Caldono during the 2019 Minga, which blocked the Pan-American Highway in Cauca for a month. The empty seats symbolize the hollow promise of dialogue, as social movements like the Minga push beyond the limits of participation and representation in the state.

The constant postponement of dialogue is central to the state’s strategy for evading responsibility. Even after the landmark 2016 Peace Accords between the Colombian state and the Revolutionary Armed Forces of Colombia (Fuerzas Armadas Revolucionarias de Colombia, FARC), the government has avoided implementing key aspects of the agreements. The Regional Indigenous Council of Cauca (Consejo Regional Indígena del Cauca, CRIC), for example, has long denounced more than 1,400 unfulfilled agreements with the government.

After Duque’s expected affront at the People’s Coliseum, the Minga had to make a decision about its next steps. Their collective energies had, until that moment, focused on bringing people together and preparing arguments for the debate with the head of state. From the beginning, the Minga was slated to march to Bogotá. But there were doubts about the capacity to take on such a journey. The suffering caused by the pandemic and the toll of systemic violence exacerbated the difficulties associated with mobilizing, feeding, and housing thousands of people during the long journey to Bogotá almost 500 kilometers away.

The next morning, each collective participating in the Minga held autonomous commissions to assess the situation. Everyone agreed on the need to march in Cali on October 14 and hold a symbolic trial of President Duque’s bad governance. Three distinct options emerged from the autonomous commissions: (1) end the mobilization and prepare a nationwide strike for 2021; (2) return to El Pital, where the mobilization started, and shut down the Pan-American Highway until the president showed up; and (3) continue the Minga and caravan through various cities until arriving in Bogotá. 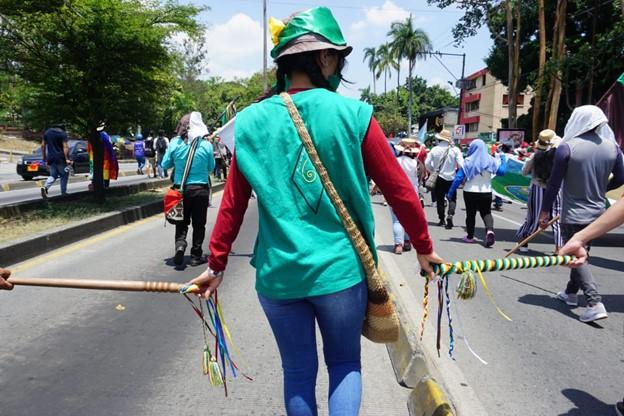 Each option had a downside. Returning home was a sign of weakness. Blocking the highway would surely lead to repression, injuries, and death at the hands of the police and military. Continuing to Bogotá with several stops along the way was exhausting and did not guarantee an audience with the president.

After a day of debate, the collectives reached a consensus and decided to travel to Bogotá. The decision came down to their rejected demands to be heard. The collective had to make the most of the cooperative momentum surrounding the Minga. People were sick of the pointless “high level commissions” and meetings with government officials that never led to anything meaningful. The Minga would not go looking for Duque just so that he could show his face—they would traverse the country to speak with people and convene around the four principles that brought them together: Life, Territory, Democracy, and Peace. According to one of the Indigenous activists from northern Cauca: “We came here to resist, even if that means blocking the Pan-American Highway or walking to Bogotá. We are going to send them a message from the territories.”

Violence and empty seats, however, are the government’s standard response to social movements and organizations that mobilize outside of the state’s institutional framework. The empty seat represents the state’s refusal to recognize the Minga and its intent to annul unofficial forms of dissent. 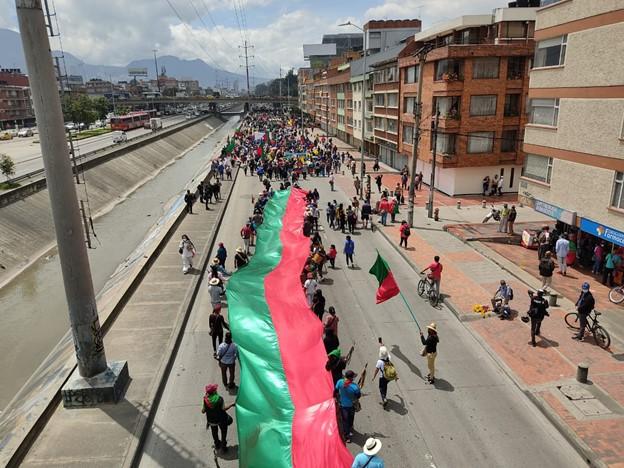 The Colombian government’s Peace Commissioner Miguel Ceballos said as much during an interview on October 16: “The rules of democracy should be obeyed. If the Minga wants to become a political party, there are tracks and channels for doing so. That way they can have all of the political debates that they desire, but in the natural space for them: The Congress of the Republic.”

Ceballos’s view assumes that minimal guarantees are in place for participating in electoral politics. However, as the Peace Commissioner, Ceballos should be aware of the stakes of the situation. 234 ex-guerrillas from the FARC have been murdered since the 2016 Peace Accords. In 2020 alone, there have been 67 massacres and 237 activists murdered. Much of this violence occurred in southwestern Colombia, the region where the Minga originated. Yet, while Ceballos encouraged submission, Minister of Defense Carlos Holmes Trujillo incited violence by claiming that the Minga was infiltrated by armed groups.

The Minga ultimately received an extraordinary welcome from crowds of supporters lining the streets of Bogotá. But it arrived in a city with fresh wounds. The popular uprising against police violence in September resulted in a massacre by state forces, and Minister Trujillo refused to acknowledge the widespread demands for accountability. Understanding the limits to the state’s conception of justice, the Minga concluded with a trial in Bogotá’s main plaza that addressed the Duque administration’s malfeasances. Although the trial emphasized the role of Duque, it served more broadly as an indictment of the “politics of death” that the state represents for the people participating in the Minga.

The demonstrations of the last two months challenged the state’s commitment to maintaining the conditions of oppression and dispossession. By reiterating the need to “walk the talk” (caminar la palabra), the Minga struggled to build a better world, a world without empty seats or state violence. That struggle exceeds the state’s narrow politics of representation and fills the streets with the possibility of a better life.

Anthony Dest is Assistant Professor of Anthropology at Lehman College.