Bolivia Has Provided Us a Radical Vision of Hope

Luis Arce’s election win is a huge victory for Bolivian social movements. All eyes are now on MAS’s political project. 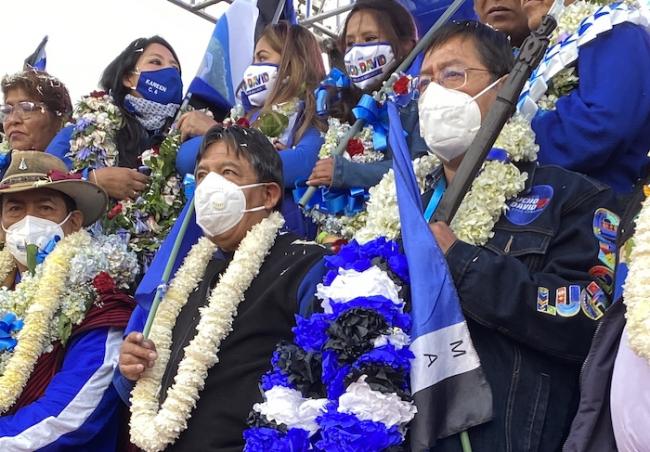 Last Sunday, 11 months after the right-wing coup against Bolivian president Evo Morales, his MAS (Movimiento al Socialismo) party won a landslide victory with 55 percent of the vote. MAS presidential candidate Luis Arce needed at least 40 percent of the vote and a 10-point lead over his nearest rival to win outright. He cleared that bar in a crowded field, surpassing Carlos Mesa—a right-leaning historian who served as president from 2003 to 2005 after Gonzalo Sánchez de Lozada resigned following the massacre of Indigenous protestors—by more than 20 points.

The credit for MAS’s resounding victory must go to Bolivia’s social movements, historically some of the strongest in Latin America. They faced down the coup-makers and voted the MAS back into office. As Arce proclaimed in his first speech following the election, “We have recovered democracy.” This is no small accomplishment.

And while MAS will confront serious challenges once in office, they’ll have some room to maneuver: Not only did Arce win the presidency, but his party also appears to have netted a majority in the Senate. Their task will be to return to the roots of MAS as a political party of social movements, advancing future policies and politics by building sustainable power alongside Indigenous peoples, trade unionists, leaders of federations, and neighborhood associations.

Evo Morales entered the 2019 election still popular, but having lost some of his luster after being in office since 2006. His popularity suffered after he narrowly lost a 2016 national referendum to do away with term limits (51 percent of the electorate voted no) and then turned to the courts to overrule the result. In the leadup to the 2019 election, he received criticism not just from right-wing opponents, but from some supporters on the Left.

Left-wing critics of Morales took issue with his retreat from the party’s most sweeping electoral promises in 2016—radical land redistribution, supports for small-scale agroindustry, diversifying the economy—and his decision to continue pursuing an extractivist agenda. They noted that the failure to transform Bolivia’s economy (still largely dependent on gas, mining, and soy) constrained the possibility for radical change and that concessions to the right-wing agroindustrial elites gave them more power inside the MAS state. Morales, for his part, insisted that these concessions and developmental projects were essential to enabling the government to enact its agenda and to reduce poverty levels.

Whatever its shortcomings, Morales’s MAS government made tremendous strides in economic development, national sovereignty, women’s and Indigenous rights, respect for the environment, and raising living standards, education levels, and healthcare coverage. The percentage of people living in poverty fell from 59.9 percent in 2006 when Morales came to power to 34.6 percent in 2017, with extreme poverty more than halving from 38.28 percent to 15.2 percent over the same period, according to government figures. For the first time in Bolivian history, Indigenous people could hold their heads high and participate as equals in politics.

The Right always opposed MAS’s rule, rightly seeing it as a threat to the country’s European and plutocratic order, which for decades had locked the country in underdevelopment while consigning Indigenous people to the margins. When the Right insisted that Morales was autocratic, it was pure opportunism. But in the wake of the disputed 2019 election—which the U.S.-backed Organization of American States helped undermine—the Right seized the moment of instability and launched a coup. Under the threat of police and military violence, Bolivia’s three-term president was forced to flee to Mexico and then seek asylum in Argentina.

Right-wing senator Jeanine Áñez declared herself interim president. There was no quorum in the Senate to approve this move, which was, at the very least, legally questionable. Nonetheless, a uniformed military officer draped her with the presidential sash on November 12, legitimizing the coup government. She promptly presided over a military massacre that killed dozens of Morales’s Indigenous supporters and granted immunity to the soldiers involved.

In the ensuing 11 months, Áñez attacked human and civil rights and slashed state support for housing and food introduced under Morales. She reopened Bolivia’s economy to intensified economic exploitation for the benefit of transnational companies by boosting gas, minerals, and lithium extraction. She opened the door to the use of five genetically modified (GM) crops, including soy, which threatens to exacerbate ecological and climactic threats while deforesting more of the Amazon through the expansion of monocultures.

And on top of reimplanting neoliberalism, Áñez far-right government pushed a hard-right religious agenda that viewed Indigenous people with contempt. After swearing herself in as president, Áñez declared with a mega-sized bible in hand, “The Bible has returned to the palace.”

Over the last several months, workers and Indigenous people went on strike and braved repression to ensure there would be a free and fair election. They restored democracy to the country. This victory—so inspirational to socialists and movements around world—is theirs.

To speak of the enormous challenges ahead risks raining on the victory parade. But challenges there will be. For starters, the economy is in near free fall, contracting 7.9 percent between March and September. The state deficit has expanded and unemployment has grown. Pandemic-related shutdowns of small and large businesses are partly to blame, but the economic contraction can also be traced to Áñez’s neoliberal policies. Arce, a former finance minister under Morales, argues that Áñez’s policies triggered a 5.6 percent drop in Bolivia’s economy between November 2019 and March 2020, even before the pandemic hit the region. How to rebuild the economy in a moment of global recession and low commodity prices will be an urgent question for MAS.

Arce plans to confront the economic crisis by expanding biodiesel production and industrializing Bolivia’s lithium reserves, some of the largest in the world. While these economic development strategies would deliver benefits to Bolivian workers, both raise serious environmental and social concerns. Biodiesel worsens deforestation. Lithium extraction, which requires exorbitant amounts of water in a region already experiencing drought, raises environmental concerns such as water contamination and overuse. Others within the new administration have argued that Arce should look to alternative economic development options.

Less controversially within MAS, Arce has vowed to resurrect Morales-era poverty reduction programs and social supports—cash handouts or “bonos”—with particular focus on the elderly, pregnant women, and low-income families with children. Unfortunately, Arce will not have the revenue from the commodity booms that previously fueled these social programs. Meanwhile, he’ll also face an exacerbated climactic and environmental crisis: forest fires in the Amazon are likely to worsen as Brazil continues to intensify development policies driving deforestation, and droughts and flooding will persist. Amid a global recession, Bolivia will have to try to press its historic demand for a right to climate justice and payment of international climate debts, urging the countries most responsible for the climate crisis to help nations like Bolivia deal with the consequences.

Back at home, Arce will have to find a way to quiet if not stamp out the growing right-wing in Santa Cruz, which is now bubbling up in resistance to the election results. This will be a formidable task. While many described Áñez as a home-grown form of Bolivian right-wing resistance, there is a long history of right-wing separatism in Santa Cruz dating back to the Cold War era and U.S. interventionism in the form of agribusiness expansion.

During the election, presidential candidate Luis Fernando Camacho, a 40-year old lawyer and head of the Pro–Santa Cruz Civic Committee who finished in third place, stirred the pot of racism in Cochabamba, Santa Cruz, Beni, and Tarija. Groups of young men on motorcycles known as “motoqueros,” resembling the neofascist Proud Boys in the United States, harassed and intimated Indigenous peoples, suppressing their voting rights. After the election, on October 21, middle- and upper-middle class Bolivians marched in the Plaza Avaroa in La Paz, protesting the vote and shouting “Arce cabrón, you’re a son of a bitch and fuck your mum for giving birth to you.” The far-right Santa Cruz Civic Committee put out a statement demanding that the electoral commission immediately suspend the official vote count. These local reactionary forces are supported by transnational right-wing groups in Brazil, Argentina, and the United States.

In taking on the Right, Arce will need to forge a new relationship with social movements. A major breaking point in this relationship came in 2011, when a controversial project to build a massive highway through the TIPNIS national park pitted Morales against Indigenous movements and other left organizations. The TIPNIS conflict and state repression of lowland Indigenous movements fed opposition to Morales and the MAS from the Left. The second effect of the TIPNIS conflict was the breaking apart of many popular-sector organizations that had previously been aligned with the government. Arce will have to carve a new path for MAS and work towards reunifying these movements.

Internally, there’s much discussion in MAS about policies that can decentralize power—avoiding the concentration of influence and attention that prevailed around Morales and, instead, training and expanding the next generation of MASistas to take on their political project. Given MAS’s roots and political commitments, there’s enormous potential for a more participatory form of democracy that decenters presidential power and expands decision-making to local bodies of government, that provides spaces where social movement activists can debate and reach agreements, if not consensus.

MAS’s landslide victory in the face of a U.S.-backed coup and a repressive, right-wing state is remarkable. It should be celebrated as a huge victory for Bolivian social movements and the international Left. All eyes are now on MAS’s political project, which is offering a radical vision of hope while tackling tough questions about how to address economic and environmental crisis. Bolivia is poised to teach us; we should watch and envision how we might bring some of their lessons home.

This piece was copublished with Jacobin.

Nicole Fabricant is an associate professor of anthropology at Towson University in Maryland. She is an editorial board member of NACLA (North American Congress on Latin America) and has written for New Politics, Dissent, and Catalyst.