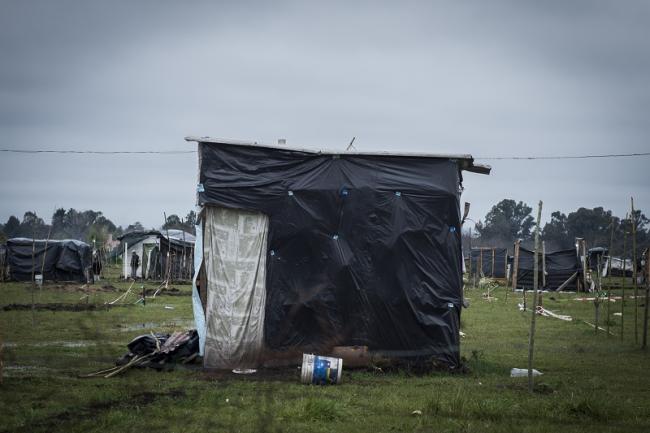 This article was co-published with Latin America News Dispatch.

José Iza’s cell phone won’t stop ringing. It is the week after the eviction of the Guernica occupation. He has been following up with the families that were left with nothing. José is asthmatic and knows that contracting Covid-19 would be dangerous for him. He only speaks with the neighbors wearing a facemask and keeping his distance.

Since the eviction, José has volunteered for the local government, working on re-locating and aiding the families left out on the streets, “one by one,” as he explains. This help might be a temporary place to stay, money for rent, or medical assistance.

Only a few weeks ago, José was hopeful, building a precarious, small house in the Barrio 20 de Julio, one of four divisions on the 100-hectare (250-acre) parcel homeless families had occupied in Guernica. The occupation was in the municipal seat of the Presidente Perón district, 23 miles south of the city of Buenos Aires. José had heard there was a chance to access land in the barrio and a relative invited him to occupy right next to him. José moved to Guernica the next day. It was July 21, the day after the occupation started. He settled on a plot, cut the grass, cleared the soil, potted flowers, and began to build a small shelter, the first part of the house he was dreaming of.

José’s work as a carpenter had dried up during the pandemic, and he could not access any government aid to sustain himself. “Before the coronavirus, I’d make four or five thousand pesos a day, and that allowed me to rent and to pay for my needs,” he said, or between $50 and $65. But after May, almost two full months since the lockdown started, he ran out of money.

José was one of the hundreds who settled spontaneously on the flatland, searching for a place to make a home. Guernica was the biggest land occupation in the country.

Occupations of land in Argentina started in 1981, during the last military dictatorship. Around 211 hectares were occupied that year. A decade later, in 1990, there were over 100 settlements in the Province of Buenos Aires. There have been at least 1,800 new occupations in the province so far in 2020, as the housing deficit grew with the Covid-19 crisis and rental prices continue to increase. Guernica stood out because of its size and the unique context.

"We do not ask for anything as a gift," residents told the media during the 100-day occupation. The people who settled in Guernica demanded state support so that they could access land ownership and slowly build their own houses. They received support from Left and progressive political organizations such as the Worker’s Party (Partido Obrero) and Barrios de Pie. With an economic crisis accelerated by the pandemic and 40.9 percent poverty at the national level, the possibility of owning one's own home is becoming more and more difficult, nearly unattainable for middle and working class people if it is not through inheritance.

The families that occupied Guernica were, like so many others, homeless. They included single mothers who escaped from gender violence with their children, men and women who were unemployed in the pandemic and no longer had money to pay rent, and so many other victims of the overlapping oppression that is being poor in a world where decent housing, despite being a constitutional right, feels like a luxury.

The Guernica occupation was a community like any other. People looked out for each other, shared meals, and kids gathered to play. An Asamblea Feminista, a Feminist Assembly, was founded as a place for women to organize. Residents dug trenches to prevent police cars from entering. José became a delegate for his block. There were three levels of hierarchy: block delegate, general delegate, and spokesperson for the occupation.

But right after the first families settled in, the alleged owners filed police and judicial reports, claiming that their constitutional right to private property was being violated. Although occupying the land is not a crime in and of itself, the self-appointed owners were entitled to file civil complaints. Instead, they filed criminal charges. Progressive organizations strongly condemned the charges, arguing that criminal proceedings on this issue are illegitimate and that they are lacking evidence to prove they are the true owners of the lands. The alleged owners argue that the land was not appropriate for housing for the families, because it is not possible to construct a sustainable power line or water pipe system. They claimed plans to create an artificial lake where the occupation stood, to adorn the spaces between the rugby, field hockey fields, and the house in their gated community.

The new local government in Buenos Aires Province took office on December 10, 2019 and only governed for three months before the coronavirus pandemic arrived. Headed by the popular ex-minister of economy Axel Kicillof, the provincial government began a series of negotiations with the families living in the occupation. They installed five tents at the occupation bringing together efforts of diverse Ministries, such as Community Development, Justice and Human Rights, Security, and Women, and Gender Policy. Andrés Larroque, a community organizer and now Minister of Community Development, moved his office to the occupation and reassured the families that they would take a comprehensive approach to provide solutions for everyone. They offered a “housing expansion” project through the delivery of materials and grants to improve houses, or an emergency housing subsidy for those who had difficulty renting. Both these initiatives, according to the government, were the result of the census they had carried out in the field.

While the government took these steps to respond to the families of Guernica, the clock kept ticking. After the alleged owners filed their complaints, Judge Martin Rizzo and prosecutor Juan Condomí Alcorta ordered an eviction. The government and organizations managed to delay it twice. But the dreaded moment came at dawn on October 29.

The night before, José was working hard in Guernica. He had already signed an agreement to accept the government’s help and had left the area a month earlier. Now, his personal task was to save his fellow occupiers, those who were still on the land, and would be evicted within the next few hours. Around 8 PM the night before the eviction he gathered 60 neighbors and was set to help them leave when he saw tensions within the camp were rising. There were many families willing to defend their right to occupy Guernica and insisted on demanding the government accept their claims. Some others thought it was safer to leave the occupation and accept the government offers. But at 11:30 on Wednesday night, rumors circulated among the community organizers that the eviction was almost a certainty. In the end, José only managed to leave with 12 of his neighbors, while the rest chose to stay and resist.

The violent raid that started at 5:30 the next morning involved 4,000 police officers. They burned the shacks where families had been living for almost four months. Sergio Berni, the province’s Minister of Security, choreographed and guided the aggressive response to the conflict. Berni is known for zealously implementing zero-tolerance policies and strict punishment. He organized the eviction with pride, vindicating the police force, and claiming responsibility for what he thought was a successful protection of private property rights. While human rights organizations condemned the unnecessary violence used to evict the remaining families, Berni praised his work in a series of tweets in the following days. 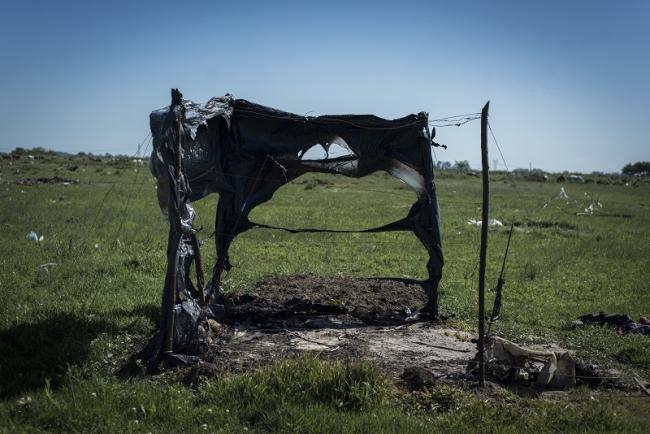 Rosario Fernández, a member of the Lawyer’s Guild (Gremial de Abogadxs), accompanied the claim for the Guernica occupation with her association. She was there as the families were evicted. She was tear-gassed, her glasses were broken, and she saw how the police, even when the land was cleared, kept chasing people who were fleeing.

“It was a cruel raid,” she said. “They flaunted their power and kept attacking 10 blocks away from the occupation, while the neighbors were asking them to stop shooting rubber bullets as it was early morning and many were leaving their houses to go to work.” The repression continued for many hours on the blocks of Guernica. Almost 40 men and women were detained. All of them were released shortly after.

Days after the raid, José’s cell phone keeps ringing and many organizations argue the eviction was illegal. The local government, although it keeps working with the evicted families, has chosen to publicly blame left-wing groups for how the situation unraveled. There are still no valid documents that confirm the domain of the land where the occupation emerged, only what the lawyer Fernández defines as “papelitos,” inconsequential papers, none of which fulfill the legal procedures to affirm ownership: a proper registration signed by a scribe.

The Political Investigation Team (Equipo de Investigación Política, EDIPO) published a thread showing that one of the land owners, a company called Bellaco S.A., obtained the land through an adjudication in the last months of the military dictatorship, in 1983. This finding shows the close links between private property and violence in contemporary Argentina.

Guernica is just another example of the power imbalance that is visible throughout the country’s history. The land was cleared, but Argentines continue waiting for a decisive solution to the housing problem.