A State of Mistrust 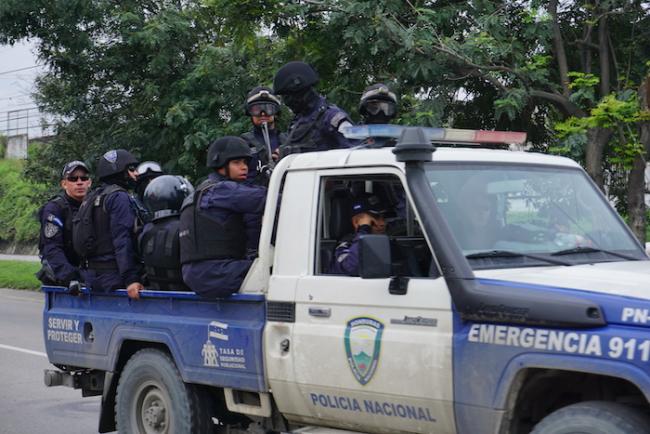 Officer Mendez* had no illusions about fighting crime or making his country a better place when he decided to join the Honduran police force. After a failed attempt to migrate to the United States, he needed a job, and the police were hiring. Peeling paint and dilapidated waiting-room chairs adorn his crumbling police station, and half-broken fans “cool” the humid air. “Do you know why people leave?” the young officer, no older than 21, asks us in a rare moment of conviction. “Por la delincuencia. Y las autoridades,” he adds, shaking his head, “no hacen nada.” He almost spits the words: People leave Honduras because of crime, and the authorities don’t do anything.

We had each heard this refrain before—from victims and their families, migrants, displaced children, and mothers crying over bullet-ridden bodies. Lamenting how little the authorities do to protect people, stop crime and corruption, and bring perpetrators to justice is commonplace in Honduras. Hearing a police officer utter the words, however, showed how deep the exasperation runs.

In 2012, three years after the coup d’etat that removed democratically elected president Manuel Zelaya, Honduras shocked the world when its homicide rate became the highest of any country outside of war zones, surpassing 90 murders per 100,000 people. With a homicide rate nearly double that, Honduras’s second largest city and economic capital, San Pedro Sula, earned the title of “murder capital of the world.” Many journalists have since turned their attention to Honduras, eager to depict the violent rule of gangs and drug cartels. Many major media outlets continue to run images of tattooed youth, bloodied bodies splayed on dirt streets, skinny boys holding guns, and crying, distraught women.

Yet, the gangs, as violent as they are, are a consequence of the much deeper structural violence built into Honduras’s systems of control—and ostensibly, protection. In 2019, we interviewed police, medical examiners (MEs), and public prosecutors—or fiscales—across six municipalities in Honduras. We sought to understand the enormous gap between the widespread feelings of insecurity in the communities where we work and the homicide numbers touted by Honduran President Juan Orlando Hernández and the United States that seemed to suggest a safer Honduras. We came away with a muddied picture of convoluted, ineffective, and inconsistent processes; sympathy for under-resourced, overworked, and disillusioned civil servants; and a clear sense that, across the board, the authorities do not trust the authorities in Honduras.

Better to React and Flee

For many fiscales, the interdependence of state institutions and dual hierarchies of power make it harder—and more dangerous—to do their jobs. The fiscal directs homicide investigations in collaboration with MEs, investigative police, and, at times, military police. The fiscales and MEs are part of the Ministerio Publico (MP), the state institution that houses both the Fiscalía (like District Attorney’s Offices) and Forensic Medicine. The fiscal authorizes autopsies, oversees evidence collection, makes formal accusations, and presents in court. Fiscales work with the investigative police department, Dirección Policial de Investigaciones (DPI), which is under the command of the Policia Nacional and answers directly to the Honduran president.

A newly built MP in another municipality boasts fresh paint, a friendly logo, and air conditioning—the telltale signs of U.S. assistance. Despite the better physical space, the fiscal estimates having 110 old, unsolved cases and gets 10 new cases a month. Abogado Gerry’s hands shake as we sit down in a small, windowless office. He is diplomatic but unequivocal. Over 10 years as a fiscal, he has been threatened several times, to varying degrees of severity. “Threats are part of the job,” he says.A colleague counseled him not to report these incidents for his own safety. So, he, like other fiscales we interviewed, switched posts whenever threats arose. Now, though, he fears deeper trouble.

“The police…I do not trust them,” Abogado Gerry says in a hushed voice. “They are linked to organized crime.” Although he leads investigations, the police answer to their own chiefs, not the MP, so ultimately he cannot count on them to follow his directions. He also suspects officers have tampered with his crime scenes. When they were unable to find the shell casings at a shooting, for example, he thought it was possible that police had hidden this crucial evidence. No longer trusting everyone in the MP either and feeling unsupported and unprotected, Abogado Gerry considers quitting altogether. “Better to react and flee,” he concludes.

In another city, Abogada Marilyn neared the end of her 24-hour shift, visibly exhausted. Typically, public prosecutors are on-call for 24 hours at least twice a week. Like most of her colleagues, she is relocated every two or three years for safety. Risk is part of the job, she explains. The day before speaking with us, for example, she had presented at a court hearing against a gang member accused of raping a minor. He glared at her. When she left the courthouse, she saw someone photographing and filming her. She called the police, requesting an escort, but was not surprised when they never showed.

Another fiscal filed complaints after witnessing military police conduct extrajudicial killings. The Policía Militar del Orden Público (PMOP) then threatened him and his family. Years later, and after completely withdrawing his name from the file, his case was marked “resolved.” We start saying, “And if you as the fiscal can’t get justice—” and he finishes our sentence: “Imagínense, los demás.” Imagine everyone else.

The Evil Came with Them

After high-profile murders in 2011, pressure mounted to reform Honduras’s notoriously corrupt police. In 2015, President Hernández disbanded the investigative unit, Dirección Nacional de Investigación Criminal (DNIC)—itself created in the wake of human rights complaints—and reconstituted it as the DPI. Policing problems extended much wider, however, and in 2016, a special commission created by presidential decree began a process of depuración: a purge. The commission, composed of civil society representatives closely linked to the U.S. Embassy and headed by Security Minister Julián Pacheco, who was implicated alongside President Hernández in a 2019 U.S. drug trafficking investigation, shrouded its dismissal decisions in secrecy. Policing units have since proliferated; the latest addition to this ever-expanding security state is a unit specialized in policing former police. Of the more than 5,000 officers purged as of 2018, not one had been convicted of involvement in criminal activities, and at least 90 percent received full severance, according to the commission.

* All names are pseudonyms, and locations are obscured to protect individuals’ identities.

Marna Shorack is an MA student in Human Rights at the University of London’s School of Advanced Studies. A former Fulbright Scholar, her research focuses on children and youth, state violence, and forced migration in Honduras.

Elizabeth G. Kennedy is a social scientist, primarily based in El Salvador, Guatemala, Honduras or the U.S.-Mexico border since 2011. Independently and with Human Rights Watch, the United Nations High Commissioner for Refugees, a Fulbright Fellowship, and others, she has interviewed over 1,700 Central American migrants and 250 officials and service providers, compiling databases to triangulate the information collected in these interviews.

Amelia Frank-Vitale is a doctoral candidate in Anthropology at the University of Michigan. Drawing from long-term ethnographic fieldwork conducted in San Pedro Sula, her current research is focused on the subjectivity produced through continued engagement with cycles of migration, detention, and deportation. Her research for this article was supported by the Wenner-Gren Foundation, the Social Science Research Council, the Inter-American Foundation, the Fulbright, and the Weiser Center for Emerging Democracies at the University of Michigan.