El Salvador President Nayib Bukele Has Blood on His Hands

On the eve of legislative and municipal elections in El Salvador, one of the worst acts of political violence since the signing of the Peace Accords in 1992 shook the country. 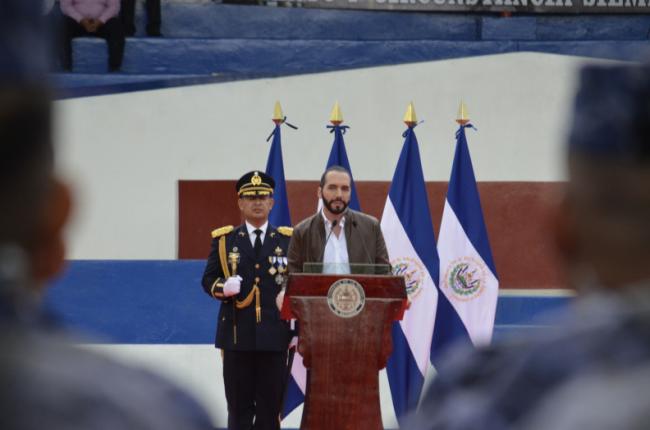 This article originally appeared in Jacobin América Latina and is co-published in English with Jacobin.

On the evening of Sunday, January 31, a pickup truck carrying members of El Salvador’s main opposition party, the Farabundo Martí National Liberation Front (FMLN), was intercepted. The truck had been traveling from a campaign event in the capital, San Salvador, when three assailants stopped the vehicle and opened fire. Two people were killed: Juan de Dios Tejada and Gloria Rogel del Cid, both veterans of the civil war between the FMLN and the US-backed military dictatorship. Three more were wounded.

Rather than condemn the violence, President Nayib Bukele responded by spreading conspiracy theories, reversing the roles between the assailants and their victims. Bukele, the 39-year-old millionaire who campaigned as an irreverent and rebellious political outsider, has waged a hate-filled crusade against the FMLN ever since his expulsion from the party in 2017. Using social networks, private digital media, and the government communication apparatus, the president has targeted his former party with relentless incendiary insults and disinformation.

Moments after the attack, Bukele insinuated that the shooting was a false flag, contrived by the FMLN itself: “It appears that the dying parties have begun their final plan. So desperate not to lose their privileges and their corruption. I thought they couldn’t stoop any lower, but they did,” he tweeted. Following revelations that one of the suspects was an agent of the National Civil Police, assigned to the Health Ministry with the Protection of Important Persons unit (PPI, in Spanish), Bukele changed tactics and claimed the attack was actually an armed confrontation between both parties.

The attorney general rejected this theory. Instead, he charged all three men implicated in the attack with homicide. All work in Bukele’s Ministry of Health: one subcontracted as a private security guard, one as a driver, and one, the shooter, a PPI policeman assigned to the ministry.

Carried out by state actors, the attack has revived the ugliest specters of the Salvadoran civil war: paramilitary death squads. “I’m not saying that the ministry gave the order to kill them, but I can say that there is an army of assassins being organized outside of the law, and that is very dangerous,” warned Nidia Díaz, former guerrilla commander, head of the FMLN’s parliamentary group, and signatory to the 1992 Peace Accords.

In an official statement, the FMLN denounced “this savage and criminal attack as a result of the campaign of hatred waged by the Executive Office and President Bukele against our party and our membership.” A few days later, a video circulated on social media showing members of the president’s Nuevas Ideas party dancing around a coffin draped in an FMLN flag.

Since his presidential campaign, Bukele has positioned himself as a messianic figure, a savior against diabolical enemies of the people, most saliently, the FMLN. His government assumed an authoritarian populist character, driven by publicity, militarism, and conflict.

He became the first head of state not to commemorate the Peace Accords that ended the country’s civil war. On the contrary, Bukele has dedicated himself to systematically reversing the fragile gains of that historic negotiation, fomenting the politicization of state security forces and challenging the separation of powers to the point of invading the legislature itself, on February 9, 2020, with the Armed Forces.

The January 31 attack took place less than a month from midterm elections on February 28, in which Bukele expects to overtake both the Left and the traditional right-wing parties in the Legislative Assembly with his new instrument, New Ideas, populated by the most repellent opportunists in Salvadoran politics. By conquering the legislative branch, Bukele hopes to free his administration from opposition oversight.

Polls predict that New Ideas will be El Salvador’s leading legislative faction; what remains to be seen is the margin of victory. With a simple majority of forty-three legislators, the president could appoint loyal magistrates to the Auditing Court to conceal the brazen corruption that has characterized his government. In a less likely scenario, New Ideas in coalition with smaller allied parties could achieve a supermajority of fifty-six, allowing the president to select the attorney general and Supreme Court magistrates, securing control of the judicial branch as well.

In this decisive electoral context, Bukele’s strategy is to remain belligerent. Despite near-certain victory on February 28, he is agitating his base to expect fraud, fomenting mistrust in the electoral process. At the same time, he continues to dispute the attorney general’s narrative of the events of January 31. The National Civil Police, newly politicized and loyal to the president, have also intervened to reproduce his claim of an exchange of fire and question the attorney general’s investigation.

The open conflict between the president and police against the attorney general, on the one hand, and the Supreme Electoral Tribunal, on the other, is hardly novel — such disputes between branches of state have thrust the country from one constitutional crisis to another since the beginning of Bukele’s term in 2019. It is still worrying. Forgotten in the president’s melodrama are the victims, Juan and Gloria, who risked their lives so that the people of El Salvador would never again suffer the repression that surprised them that night, twenty-nine years after the declaration of peace.

Whatever the results of the upcoming vote, the acute economic, ecological, political, and social crises enveloping El Salvador will only deepen. Bukele has no interest in governing. After more than eighteen months in power, all the administration has to show for itself is a single incomplete hospital, a public debt that has ballooned to 90 percent of GDP, and a slew of unfulfilled promises.

Without the opposition legislators to blame for his inaction, it’s not difficult to imagine a scenario in which Bukele’s followers tire of the spectacle and begin to suspect that the president and his party are no different from the much-derided political class that Bukele staked his presidency against. The Salvadoran left, however, and its historical electoral instrument, the FMLN, remain unable to create the necessary conditions to capitalize on this eventual disillusionment.

Bukele’s rise is the product of El Salvador’s young, postwar bourgeoise democracy in crisis, the same crisis that has paralyzed the Left. After two terms in office (2009–2019), the FMLN is preparing for its worst electoral showing since its debut in party politics. Social movements are debilitated and divided, some co-opted by the president and many more resentful of the FMLN.

Bukele seeks to defame the country’s revolutionary struggle, dismissing the historical project to which people like Juan and Gloria pledged their lives. Now, more than ever, that project demands to be reclaimed. Not only in the defense of historical memory, or for the sake of the truth, but as an urgent, revitalized horizon of contemporary struggle.

Hilary Goodfriend is a doctoral student in Latin American Studies at the National Autonomous University of México (UNAM). She is a member of the NACLA Editorial Board.