The port city is key to Colombia's export economy, but its residents face unemployment and rampant violence. 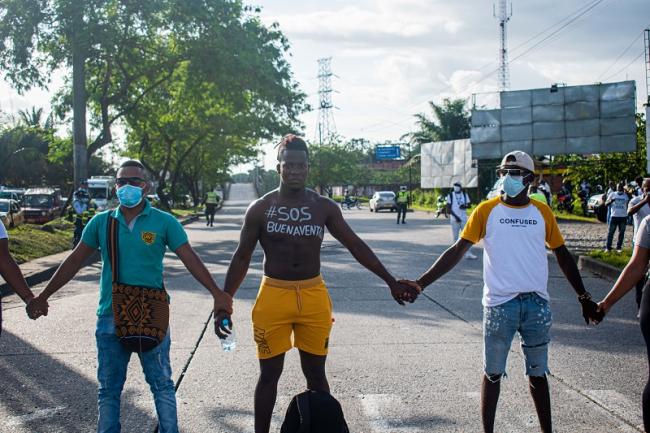 When Monica Nadira Angulo heard two loud explosions, she thought they were just firecrackers, commonly heard throughout Colombia in the holiday season. Angulo, 11 at the time, was playing with friends in the La Playita neighborhood of Buenaventura, which juts up against the Pacific Ocean.

When she turned, she saw a boy pointing a gun at her.

She didn’t realize what was happening until he fired a shot, sending Angulo and her friends running into the nearest house.

Since then, Angulo, who is now 19, says that violence has been a constant in her life in Buenaventura. The level of violence has always ebbed and flowed, but something changed in recent months.

“I’ve never seen this level of violence. It’s like a massacre,” says Angulo. “It never crossed our minds that we’d see people walking around our neighborhood with machine guns.”

Criminal groups vying for control of illegal economies in Buenaventura, a port city on Colombia’s Pacific Coast, have long caused violence. In addition, the city’s majority Afro-Colombian population lacks access to necessities like clean water, decent jobs, and educational opportunities. Recently, residents have been raising awareness and calling for major policy changes to address both the current conflict and underlying issues.

The recent wave of violence began at the end of last year, when the La Local gang split into two competing groups, Los Espartanos and Los Chotas, beginning a turf war. Six people were murdered on December 31, 2020. Since the beginning of the year, attacks have increased significantly, terrorizing Buenaventura residents after a year already marked by the pandemic.

Industrial Development and Cycles of Violence

It is not the first time that news outlets have reported violence forcing people from their homes in areas of Buenaventura where new industrial projects are proposed.

In 2008, construction began in the Comuna 5 district for the Buenaventura Containers Terminal (TCBUEN), a megaproject worth over $200 million. Project representatives were buying up property in the Inmaculada, Miramar, Santa Fe, Santa Cruz, and Punta del Este neighborhoods for the project. But some residents didn’t want to sell.

“And magically—magically! —a fire destroyed about 15 houses that were located right where they wanted to make the port,” says Angulo, who knows people from the Inmaculada area. In 2014, El Espectador reported accusations of arson that destroyed 35 homes and displaced dozens of families in the Santa Fe neighborhood. Around the same time, armed groups started appearing in the area, threatening people until they sold their homes or killing those who refused.

“It’s almost hard to keep them all straight,” says Gimena Sánchez-Garzoli, Director for the Andes, at the Washington Office on Latin America (WOLA). She says that a project called Puerto Solo represents a possible direct link between new mega-projects and the recent violence.

Buenaventura’s ports process over 50 percent of Colombia’s imports and exports. Illegal and legal commercial interests exist side by side, each using the port to move their goods.

Sánchez-Garzoli says that while many people suspect a link between companies operating in Buenaventura and rising rates of violence, it has been difficult to prove. “I do think that there is that pressure behind it, and probably financing of some of the [criminal] groups and the violence, because that’s been the history in other regions of Colombia,” she says.

“Buenaventura has had this problem for 20 years,” says Sánchez-Garzoli of Buenaventura’s criminal groups. “What is different is that, since then, Colombia has signed 17 free trade agreements. And the whole point of those free trade agreements, at least the way that the Colombian government sold it to the U.S., was to help address inequality.”

That result has not materialized. 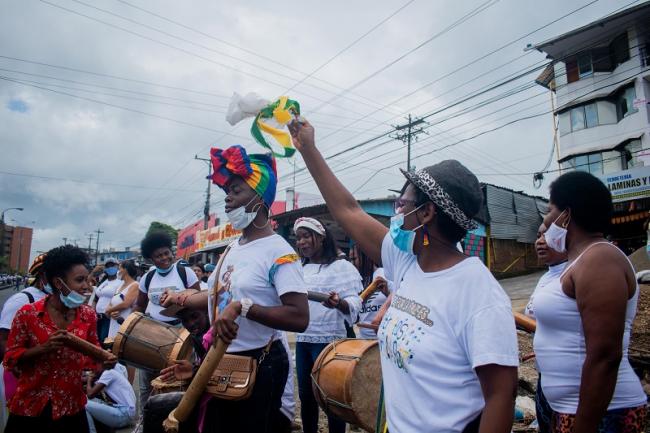 Criminal activity and commercial interests are not the only complicating issues.

“There’s structural racism here. The people living in Buenaventura have historically lived in miserable conditions. It’s death as a strategy,” says Francia Márquez Mina, an Afro-Colombian leader and human rights activist. “What’s going on in Buenaventura is going on throughout the country.”

As in the rest of the world, inequality in Colombia falls along racial and ethnic lines. According to 2018 reports by the National Administrative Department of Statistics, rates of poverty and unmet basic needs are disproportionately high in areas with large Afro-Colombian populations. Buenaventura, where more than 80 percent of the population is Afro-Colombian, and there are also Indigenous communities, embodies that trend.

Although Buenaventura’s ports process almost billions of dollars in goods each year, many people in the city lack access to basic services like clean, running water. “The ports have water 24 hours a day, and the Inmaculada barrio only has water, at the most, two times a week,” says Angulo. She says sometimes residents go weeks without water.

Employment opportunities are also scarce in the city. Nearly 90 percent of the population gets by with informal work, while others work in jobs related to the port. The privatization of the ports weakened unions in 1994 and stripped port workers of the few protections they had left. The pandemic has further diminished local job opportunities in the last year.

Educational opportunities are also limited, and most channel young people into the port economy. Those with other professional dreams have to leave to study at universities in bigger cities, like nearby Cali, creating a brain drain in Buenaventura.

The instability and poverty that ravage Buenaventura make it easy for criminal groups, promising financial and emotional support, to recruit new members.

Months of strict lockdown measures due to Covid-19 caused a rise in unemployment throughout Colombia last year and created ideal circumstances for Buenaventura’s warring criminal groups to find new members. Since the end of 2020, the violence has been unrelenting and ubiquitous, disrupting locals’ daily lives. Lorna Alomia, 21, was recently robbed at gunpoint when she met up with three friends.

While the friends were chatting, two young men appeared and fired two shots in the air. The assailants stole Alomia’s phone, and her friends’ phones and wallets. Since the incident, Alomia hasn’t wanted to leave the house for fear of being robbed or killed.

The mayor imposed a nighttime curfew in early January. Businesses and markets are closing early to avoid confrontations, losing sales after months of pandemic-related restriction that battered profits. The general feeling is one of intense fear.

In the face of such long-standing government neglect, it comes as no surprise that the Colombian government has done little in response to the current bout of violence. While on the campaign trail, President Iván Duque criticized past presidents for forgetting Buenaventura and promised to be different. But he has ignored calls from locals and members of Congress to visit the city since the violence began.

Instead, over the last few weeks people have organized marches and protests to demand the attention and help they need. Young people have taken an especially active role in organizing, using the hashtag #SOSBuenaventura on social media to publicize their efforts. Student groups in Cali have organized food drives and found housing for those who fled the violence.

In Buenaventura, a February 5 protest blocked traffic on the Piñal Bridge, a major interconnector in the city. Videos of another protest show a 13-mile human chain of masked participants dressed in white t-shirts holding bandanas that read “Forward for a peaceful ‘Tura.”

Although the immediate issue is the violence plaguing the area, activists say that the real solution lies in structural change. They insist that the response they want is not military aid but social investment.

He also pointed to the government’s tendency to send in the riot police or military whenever there is conflict. “That costs a lot. Why are there funds for weapons but no resources for resolving the people of Buenaventura’s basic unmet needs?”

The violence in Buenaventura, both now and in the past, is the result of many factors: economic inequality, partisan agendas, institutionalized racism, corrupt private interests, and government neglect.

But for Angulo, it all boils down to one thing.

“They’ve never seen it as a place where people live,” she says. “Buenaventura, for them, it’s just a port.”

Liza Schmidt is a master's candidate in Journalism and Latin American and Caribbean Studies at New York University, focusing on Colombia.