Organizing Against the Immigration Cruelty Consensus

Migrant exoduses from Haiti illuminate how authoritarianism, globalization, and anti-Blackness shape mobility in the Americas and U.S. border policy, regardless of the government in power. 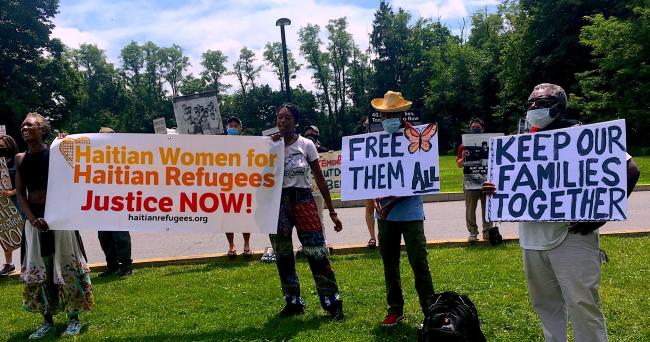 In the aftermath of the September 1991 military coup that overthrew democratically elected president Jean-Bertrand Aristide, tens of thousands of Haitians boarded precarious boats to flee a brutal reign of terror. The U.S. Coast Guard intercepted them at sea and detained them at the U.S. naval base in Guantanamo Bay. In May 1992, President George H.W. Bush ordered those apprehended be immediately returned without considering their asylum claims.

Amid the crisis, Ninaj Raoul, who served as a Haitian Kreyòl interpreter in the Guantanamo camp, cofounded Haitian Women for Haitian Refugees (HWHR) to provide support for Haitian families seeking asylum in the United States. The Brooklyn-based organization offers popular education, leadership training, legal assistance, and other forms of support to refugees and immigrants while extending solidarity to communities in Haiti.

In this conversation with Mamyrah Dougé-Prosper and Mark Schuller, Raoul discusses how authoritarianism and globalization produce the forced migration of Haitians in the Americas. She emphasizes how anti-Blackness, specifically anti-Haitianism, shapes U.S. immigration policy regardless of the political party in power. She highlights HWHR’s recent work with Haitians fleeing the corruption and violence of the Haitian Tèt Kale Party (PHTK) regime, including the organization’s responses to the Obama administration’s escalation of deportations of Haitians in 2016 and the Trump administration’s efforts to trigger mass deportations by ending Temporary Protected Status (TPS) for 400,000 immigrants, including 55,000 Haitians. The interview has been edited for length and clarity.

How does Haitian Women for Haitian Refugees understand the migration crisis in the Americas today?

Ninaj Raoul: When Haitian people think that certain things are specific to Haiti, I’m always saying: It’s not just Haiti, it’s everywhere else. We work with different immigrant groups from different countries, especially in the Temporary Protected Status (TPS) movement with people from Honduras, El Salvador, and Nicaragua—our work with the National TPS Alliance represents TPS holders from al 13 countries—and in recent years with the refugees who have been coming through the route from South America and Central America. We hear the stories of what they’ve dealt with in different countries and the changes in the different economies, [the persecution they were fleeing at home, as well as] what brought them [to certain destinations, such as] the need for labor in Brazil initially, and then Chile. [It] always comes back to globalization and the need for cheap labor. 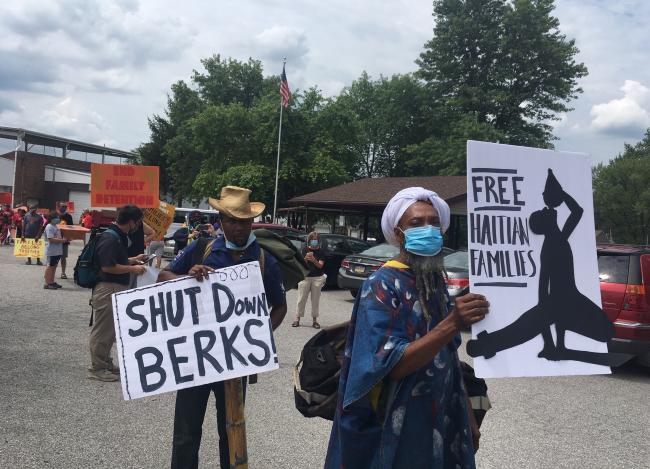 A lot of the refugees with whom I work now are folks that had established businesses. And in Haiti, you have to have some kind of means to get all the way to South America [and then to the U.S. border]. Like at least $4,000. It’s not like decades ago when you were forced to flee your home country [to the United States] on a boat. [Haitian refugees] are coming in with different levels of education as well. And what has pushed them out is just not being able to survive in their own country. I hear the stories about the bandits who are preventing people from just having an honest business and surviving and taking care of their families and those who are targeted for political reasons. It’s so amazing how identical it is to the stories we hear about El Salvador and Honduras. And it seems to be even more intense over there. A lot of Haitian people find it hard to believe.

[These factors are] coupled with the situation of people being pushed out because of basic food sovereignty issues and rights to water, with the crop dumping, land grabbing, and all the interference into natural resources in these countries. So, it’s obviously systemic and it’s happening [in Haiti] and in other developing countries. It’s nothing new, but it has come to a point where it has impacted the movement of people more than ever.

Tell us about the beginnings of the organization.

NR: It was early 1992, and that’s when the folks were coming through Guantanamo Bay, fleeing persecution from the first coup against Jean-Bertrand Aristide. In most cases, you couldn’t just go to the airport and get on a plane. So people who came by boat might’ve done so because there was no other way to leave. It was interesting because when you were in Guantanamo, you got screened, you had these credible fear interviews, much like the ones at the border with Mexico in Texas, California, and Arizona right now to determine if you qualify to apply for asylum—not to be granted asylum, but to be paroled into the United States to apply for asylum. [In the screening at the Guantanamo detention camp], either you were considered a political refugee or an economic refugee. And if you were an economic refugee, you were forcibly repatriated to Haiti. And if you were deemed to be potentially a political refugee, then you were allowed to come here and apply for asylum.

[Those leaving Haiti at that time] were people who were more popular, who were politically involved in one way or another, just for supporting a party that they felt allowed them to better their own situation. About 40,000 people came through [Guantanamo] that first year from October 1991 to June 1992, and about 25 percent of them were allowed to come into the United States.

A small percentage were found to be HIV positive in Guantanamo. That was probably less than 2 percent, but it was so highly publicized that you would think all 40,000 refugees were HIV positive. There was an HIV exclusion ban in place at the time in 1992 that wasn’t actually lifted until [January 2010 by] Barack Obama.

The organization was cofounded by Marie Lily Cerat and me. We met in Guantanamo, because we were both interpreters. Eventually, we had to take some of the refugees into our homes because there were pregnant women who were coming in. And we were involved with organizing around the litigation [challenging both the indefinite detention of HIV-positive Haitians in Guantanamo and the direct return of Haitians at sea without asylum screening].