The Mexican state legitimizes deportations and family separation by veiling these violent interventions as “protection practices." 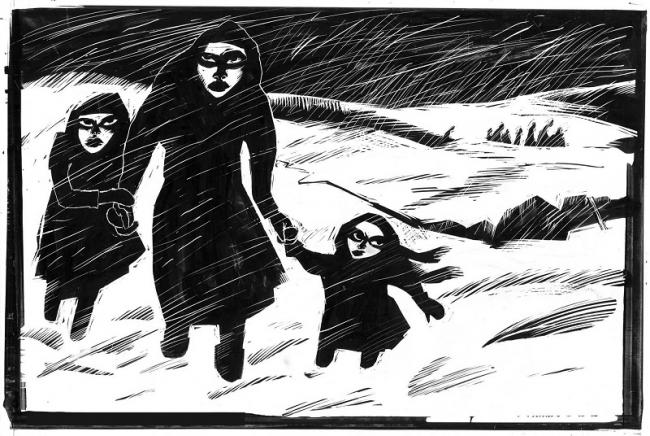 This is the fifth article in a series on child migration from the Infancias y Migración Working Group. New articles go up on Fridays. Para leer la versión en español, haz clic aquí.

On February 13, 2018, local and national media reported an operation led by military and state security forces had managed to “locate” and “rescue” 301 migrants who had been kidnapped in the city of Matamoros, on Mexico’s northeastern border. Juan (not his real name) was one of the 229 people held in one of various safe houses while an organized crime group threatened and extorted his family members.

Before being kidnapped, Juan had traveled for 30 hours hidden in the back of a trailer truck, crammed with dozens of migrants trying to cross Mexico en route to the northern border. After the rescue operation, Juan, like the rest of the group, was handed over to authorities. The National Migration Institute (INM) kept him detained without any access to consular services or legal support for about three weeks at the international bridge that connects Matamoros, Tamaulipas to the city of Brownsville, Texas.

While these experiences would be traumatic for anybody, they had an even greater impact on Juan, who at the time was only four years old. Unfortunately, Juan would also have to confront another traumatic experience that only migrant children face. Although Juan traveled accompanied by his father and father’s partner and they had not been separated throughout the entire journey, the state apparatus of migration control categorized Juan as an “unaccompanied migrant minor.” Since his father did not have documentation proving their relationship, the authorities separated them and deported Juan’s father a couple weeks later.

The trauma Juan had suffered during the kidnapping was not a good enough reason to avoid separating him from his father. Mexican immigration authorities determined that his father’s undocumented status put Juan at risk, and they sent Juan to a government shelter for unaccompanied migrant children in Matamoros, where he stayed for six days.

The authorities involved deemed Juan too young to understand what was happening and didn’t even explain to him the decisions they had made. But he understood in his own way and explained the situation very well. One day in the shelter, Juan was playing with soap bubbles. He ran to the window, extended his thin arms outside, and squeezed his cheeks against the metal bars, blowing to send a burst of bubbles outside. During coauthor Elisa Sardão’s doctoral research, she asked Juan if he wanted to instead blow bubbles inside where he could try to catch them. “No,” he said, “because at least these bubbles deserve to go flying out there.”

Juan spent the following days playing with toy cars, pretending that the “police bad guys” were chasing the “other bad guys.” Covering his mouth with his hand as if he were speaking over a radio, Juan repeated: “I don’t care if they’re children, send all of them to jail!” When he wasn’t distracted with toys, Juan was always attentive to the coming and goings of the INM vehicles in the shelter’s parking lot, asking: “Is that my dad coming to pick me up?” 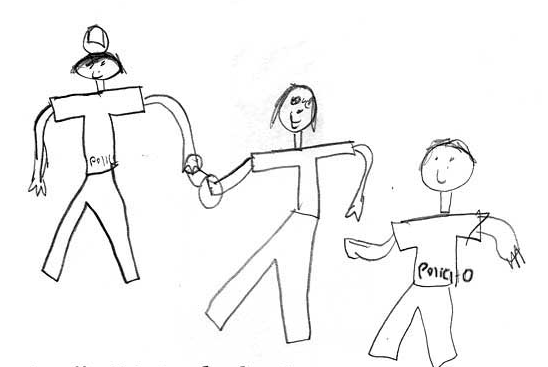 The other children in the shelter said that Juan spent entire nights awake crying and calling out for his father. The next day, he wouldn’t be able to do anything but sleep, and he only wanted to eat chocolate milk. The most significant relationship Juan managed to develop during those days was with the woman responsible for cleaning, who tried to pass as much time with him as possible. She assured Juan that she had spoken to his father and that he had said that he would come the following week to pick Juan up. On one of the beds, Juan built a refuge of plush toys lined up in a circle, where he would lie down and cry when sadness overcame him.

The state apparatus that rescued Juan, separated him from his father, and sent him to a shelter in a foreign country thousands of miles away from his home took these actions in the name of “protecting” him from the possibility that the man he called “dad” while crying inconsolably might be a trafficker. This happened even though Juan’s mother confirmed, via the Honduran consulate, that they were father and son and that she had not been Juan’s primary caregiver for several years. Bureaucratic child migrant protection protocols and the insensitive state apparatus that intervened in Juan’s life in an individual and isolated way were not capable of recognizing this family tie.

State officials were likewise incapable of recognizing that the “groups” of people that the army had “located” as a result of anonymous calls from city residents were, in fact, migrant families. Records show that 128 of the 301 people “rescued” by the military that day were children.

More importantly, the state that intervened to “protect” Juan from his own father is the same state that had been completely absent when Juan irregularly crossed Mexico’s southern border and had to travel for long hours hidden in the darkness of a trailer. The same state that congratulated itself for “locating” and “rescuing” Juan was absent when he and his father had to put their lives in the hands of an organized crime group, when they suffered an accident as the truck they were traveling in tipped and received no help from authorities, and when they were subsequently kidnapped by a rival group of human traffickers. The same state then locked up Juan and his father for three weeks in a detention center—even though Mexico’s Law on Child and Adolescent Rights has prohibited the practice since 2014—only to later separate the two.

In this case, in order to understand how state interventions exercise violence against migrants, it is necessary to first understand the bureaucratic and legal mechanisms through which institutions, agents, and officials decide to intervene and exercise their authority in certain contexts. In some instances, even when migrants’ lives are in danger,  these powers are completely absent. Yet in Juan’s case, certain logics and norms enable the state and its authorities to decide that separating a father and his four-year-old son who just suffered a kidnapping—alongside dozens of other families—is an act of protection. In practice, the state manages to legitimize violent and cruel actions as “protection practices,” presenting them as part of “the law” and institutional, bureaucratic procedures. This dynamic normalizes and legitimizes state violence, beginning with the very agents who exercise it.

Furthermore, in Mexico, a number of euphemisms that seek to cover up and erase cruel state interventions against migrants have normalized and legitimized such violence. Immigration authorities call migrant detention operations “rescues” and detention centers “estaciones migratorias” (“migrant stations”), even though conditions in such holding centers are similar or even worse than in prisons. They dub the act of detaining migrant children “security for the purposes of protection,” which sometimes results in family separation, and the act of returning migrants to the places they fled “assisted return.” Although this is a separate legal process, it tends to have the same psychosocial impacts on children and teens as deportation, and many migrants are obligated to sign off on assisted return against their will.

The state’s power to name reality and determine what should be recognized as “truth” has enabled the creation of euphemistic legal and protective categories that systematically violate the rights of child and adolescent migrants who are highly vulnerable and unprotected.

The very category of “unaccompanied child” has become a euphemism, as Juan’s case demonstrates. Although this designation was created with the legitimate and necessary goal of combatting human trafficking, the way immigration authorities interpret and apply the term in a bureaucratic and discretionary way obscures the fact that many of these children were not travelling alone. On the contrary, they are being separated from their fathers, mothers, and other family members by way of state intervention, without the state being held accountable or answering for the violence it perpetrates.

The Mexican state not only does not recognize family separation as a result of its immigration policies, but it uses the principles of the “child’s best interests” and “family reunification” to justify deportation of child migrants, sometimes indiscriminately, with the collusion and complicity of child protection authorities. These justifications obscure the fact that a large majority of child migrants leave home fleeing violence or seeking to reunite with parents in the United States.

In cases like Juan’s, state intervention generates violence, not protection, for three main reasons. First, because intervention is based on guidelines and procedures that bureaucratize protection and prevent agents from recognizing the either the immediate or larger social context in which child migration is situated and must be understood. Second, because the state has failed to develop and apply effective mechanisms to understand and consider the experiences, knowledge, and opinions of child migrants. And third, because state protection protocols for child migrants have never managed to genuinely place the “child’s best interests” above supposed threats to national security and a mandate to maximize detentions and deportations. As long as we fail to recognize these elements and the multiple euphemisms the state uses to detain, hold, separate, and deport children, the protection of migrant children will remain nothing more than fiction—and the gravest euphemism of them all.

The last we had heard from Juan is that he was deported to Honduras by plane, accompanied by a Child Protection Official who delivered him to his mother, who he has not lived with for several years. We may never know how many more times he might try to migrate and find himself up against a state that has built more tools to deport him than to guarantee his right to migrate and seek a different life.

Valentina Glockner is a Mexican anthropologist, specializing in migration and social studies about childhood, affiliated with the Colegio de Sonora with support from the National Council for Science and Technology (CONACYT).

Elisa Sardão Colares is a researcher with expertise in migration and childhood. She currently works as a researcher for Brazil’s National Justice Council.

About the Working Group: In July 2020, the authors convened the Infancias y Migración Working Group, consisting of 10 colleagues in five countries from a variety of disciplines. This series of articles for NACLA is the group’s first publication project. The previous articles are: Exiliados, Refugiados, Desplazados: Children and Migration Across the Americas, The Orgins of an Early School-to-Deportation Pipeline, Guatemalan Child Refugees, Then and Now, and Children who Come from Afar.