Guatemalans Have Had Enough 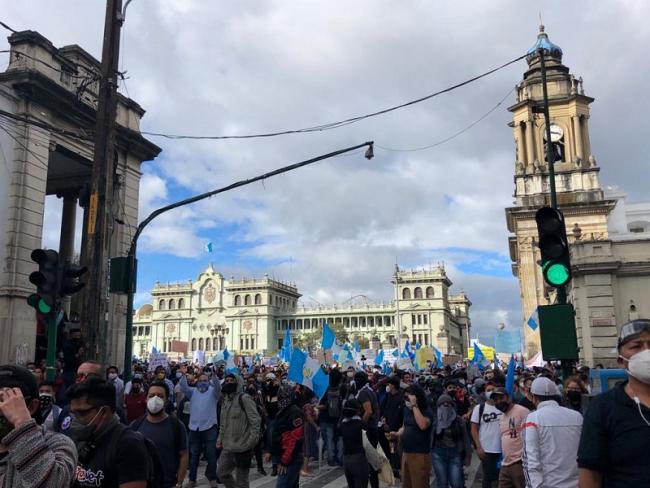 Thousands of Guatemalans took to the streets on November 21, in a historic day of unrest against an austerity budget approved under secretive conditions.

The events that unfolded over the weekend will be etched into collective memory of Guatemalans, with the iconic images of flames engulfing Congress as the embodiment of rage against the stale political class. Thousands peacefully assembled in the middle of a pandemic to urge an end to incompetence and corruption at the highest echelons of the Guatemalan state.

At midnight Sunday, Congress suspended the spending bill, not without calling for “the harshest penalties” to those involved in the “terrorists acts” against the legislative building in Guatemala City’s Zona 1.

The nonviolent anti-government protests ended with at least 43 arrests, mostly university students who put their bodies on the frontlines to protect crowds gathered in front of the National Palace. Two protestors were operated on after sustaining eye injuries, and both lost their left eye.

Now, the demands that thousands rallied behind go beyond budgetary concerns. Guatemalans won’t back down until meaningful change is realized.

Five years ago a similar moment culminated in the ousting of disgraced president Otto Pérez Molina and vice president Roxana Baldetti. Guatemalans inevitably entertain the idea that these compounding crises, which now include a severe legitimacy issue and an enraged public, might ultimately result in a similar outcome.

The Budget Vote As Boiling Point

The main slogan that drove the masses to take the streets was clear and actionable: veto the legislature’s proposed austerity budget for 2021. Ironically, at Q99.7 billion (US$12.8 billion) the spending plan is the largest in Guatemala’s history, much of it financed by public debt incurred by IMF loans.

Proposed by the legislative bloc led by President Alejandro Giammattei’s  VAMOS party, the budget was negotiated in secret and approved at dawn on November 18 by Congress. The bill included a budget increase for congressional facilities, funneling millions of quetzales to ministries enmeshed in corruption allegations, and spending cuts for education and health.

The administration alleged that the budget for 2021 was “advantageous” to the country, even though it slashed funding to key programs like the national human rights agency known as the Procuraduría de los Derechos Humanos (PDH), and lowered allocations to the judiciary.

The day before the protests erupted, and as calls for the president to veto the budget bill grew, Vice President Guillermo Castillo said in a news conference that he had “little communication with the president” and publicly extended an offer to the president to resign together, saying they should step down “for the good of the country.”

As of Monday, November 22, the president has yet to respond to the vice president’s comments.

The distance between Giammattei and Castillo, although clear for some time, “has reached the point of no return” said Guatemalan historian Rodrigo Véliz, who specializes in Guatemalan foreign policy during the Cold War.

“Perhaps the [issue] that attracted the most attention was Castillo’s stance on Social Security,” said Véliz. “The vice president defended the institution and rejected any attempt to privatize it, even amid the pandemic.”

After 10 months in office marked by crisis and ungovernability, a president with poor approval ratings, who is closed to dialogue even with his own vice president, now faces the worst legitimacy crisis of his administration. “Now we have to see who and whom is supporting the vice president,” said Véliz.

Discontent is growing due to the lack of empathy towards societal needs, shown by both legislators and officials in the executive branch. Congresspeople’s insistence on pushing the budget through is an affront on the few remaining democratic institutions in Guatemala. The timing could not be worse: an economic downturn due to the extended lockdown, a worsening public health situation due to the pandemic, and now a delicate humanitarian situation. The country is still assessing the wreckage of Eta and Iota, back-to-back hurricanes that rendered entire communities underwater.

Although nationwide demonstrations took place simultaneously, protests were called for 2 PM Saturday at the Plaza de la Constitución in Zona 1, in the heart of Guatemala City’s historic center. The open space has recently been renamed by feminist collectives as the Plaza de las Niñas, in memory of the 41 girls who burned inside an state-run orphanage in 2017, during the administration of former president and comedian Jimmy Morales. Largely attributed to negligence and abuse, the Hogar Seguro incident not only eroded the legitimacy of the state in providing welfare to its citizenry, but also inspired calls for structural changes in the outdated bureaucracy of paternalist policymaking.

Around the time that the rally started in the Plaza, protesters three blocks away set Congress ablaze as police officers looked on, passively “guarding” the building. Doubts still surround the torching, which the Giammattei administration regards as a “terrorist act.” Calls for the demonstrations were made days in advance, so the absence of security forces to protect the Congress is suspicious.

Once the building went up in flames, police moved into Congress with tear gas. Demonstrators fled and scattered into the Plaza, where the majority of the participants were peacefully assembled. A picket line of mostly university students contained the advance of the security forces, allowing for the Plaza to be free of unrest until later in the afternoon, when security forces took aim at the crowd.

Tear gas spread across the Plaza, as the crowd stampeded away from the toxic fumes. Perhaps one of the most surreal moments was when members of the National Civilian Police (PNC) were caught on camera pulling weapons out a gutter during a skirmish with protesters. At night, police vehicles equipped with water cannons cleared the Plaza and its surroundings.

As information about the detainees surfaced later in the night, lawyers and human rights defenders offered support at the Torre de Tribunales, where they were detained.

Carlos Martínez Roca, a lawyer working on transitional justice issues, helped secure their release. “The vast majority of the detainees were young people: university students, independent journalists, and people from working class backgrounds that were literally snatched from the street for being in the wrong place at the wrong time,” said Martínez Roca. “All of them complained about the excessive use of force during their arbitrary arrests, some security officers even threatening them with death.” Martínez Roca and his fellow pro bono lawyers, many of them recent university graduates, communicated with detainees’ family members during the process.

Hearings continue on Monday, November 22, but so far the vast majority of charges against protesters, which include illegal protest, public disorder, property damage, have been thrown out. Judges have criticized prosecutors' failure to present evidence in the case against political prisoners.

The day after the #21N protests, the Inter-American Commission on Human Rights issued a statement condemning the “excessive use of force” by police. Following these events of police terror, the PDH requested the court order the removal of the recently-named Minister of the Interior and police chief. This follows the Constitutional Court accepting a writ of amparo to order police to respect the right to protest.

At midnight on Sunday night, Congress released a bizarre pre-recorded statement showing tweets and Facebook posts that allegedly "incited the burning of the cultural patrimony of the country." Leaders from all parties with congressional representation appear in a message delivered by Allan Rodríguez, president of Congress and leader of the Giammattei’s VAMOS  party. Rodríguez announced that the legislature is "suspending" the budget bill, which generates concerns about the legal procedures that may follow said decision.

The Era of Repression is Ongoing

Similar to origins of the police in the United States, the police has been a defining feature of the Guatemalan nation-state and its capitalist-oriented development logic.

According to historian María Aguilar Velásquez, who studies the social history of the National Civilian Police (PNC) during the Guatemalan Civil War, it is important to contest the official narrative of a “peaceful” Guatemala after the signing of the Peace Accords in 1996. “Saturday’s event is a reflection of what has been happening to Indigenous communities for a long time, and a lesson that the state still protects its interests,” Aguilar Velásquez said.

“The first police force in Guatemala was created by Justo Rufino Barrios in the 1870s to control forced Indigenous labor in coffee plantations,” she explained. “The police owe itself to the state, which in the case of Guatemala is patriarchal, racist and exclusionary; and so, it responds to its instructions accordingly.”

Despite the creation of a new Constitution amid the ongoing civil war in 1985, massacres continued, she added. “So, during the Peace Accords, agreements established that security forces were going to be reformed—the army was going to reduce its ranks, and the PNC would be tasked with ‘protection.’”

But even after the war ended and the peace agreement was signed, repression against communities continued. “The narrative that repression is a recent feature of democratic Guatemala erases the recurrent displacements of Indigenous communities protecting their land caused by security forces,” said Aguilar Velásquez.

On Sunday night, the government of Guatemala issued a statement alleging "systematic acts of violence against national institutions." The Giammattei administration invoked the Inter-American Democratic Charter and asked the Organization of American States to mediate dialogue, claiming that "a minority group is attempting to carry out a coup.”

There are similarities between the scenes on #21N and the multiclass coalition that consolidated in 2015 and ousted Otto Pérez Molina and Roxana Baldetti. Corruption is at the center of it all. But the protest movement still lacks adequate political organization and a consolidated program to fundamentally reconfigure the antidemocratic postwar political system.

One difference between 2015 and the latest protests, according to the historian Véliz, is the display of "traces of frustration and anger" on Saturday. “So far,” he added, “there are no signs of a massive rejection of the burning of Congress, which would suggest a certain harmony with that action with the population that did not mobilize out of fear of the pandemic,” says the historian Véliz.

Simmering since 2015, Guatemalans’ anger over incompetent and corrupt governance has erupted. Now, the streets are flooded by a vibrant coalescence of diverse constituencies that is bound to keep growing under the banner of ending the self-serving pursuit of wealth and power by the political elites.

How many of us can the Plaza hold?

Vaclav Masek is a doctoral student in Sociology at the University of Southern California.