To avoid repeating the devastating mistakes of 2010, responses to the latest earthquakes in Haiti must pay attention to local activists' demands. 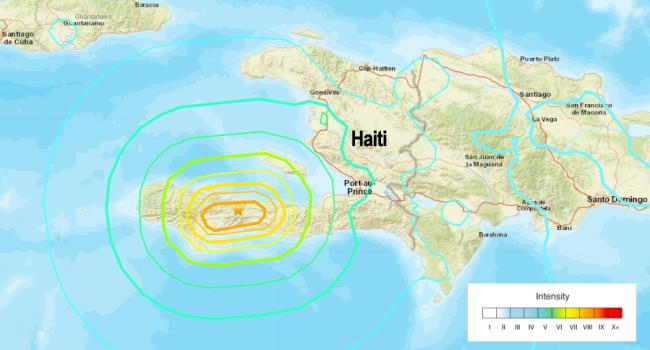 Haiti is making headline news again, which seems to happen only during periods of crisis—a scandal, a disaster, violence. These narratives dominate the imaginations of most people outside of Haiti. Since 2010, for many, Haiti has been synonymous with “earthquake.” As for people in Haiti, they need not be reminded of “douz janvye”—January 12—and the international aid response, as the country is still scarred by the humanitarian aftershocks, or what Raoul Peck called “Fatal Assistance.” Haiti is a graveyard of failed NGO projects, tattered signs scattered across the land like tombstones. Perhaps no better a symbol of the crumbling of Haitian sovereignty is the national palace, which has still not been rebuilt.

In the morning of August 14, 2021, two earthquakes struck the southern peninsula along the same fault line (Enriquillo-Plantain Garden) as 2010’s earthquake that devastated Port-au-Prince, Leogane, and surrounding areas. Haitian seismologists warned then that the 7.2 earthquake released very little pressure, rendering the fault line a seismic hazard, a ticking time bomb. The epicenters of Saturday’s two quakes with multiple shocks were just over 100 kilometers west of the 2010 earthquake. The first, to the north of Nippes, measured 6.9 on the Richter scale, and the second, by St. Louis du Sud, measured 7.2. According to Haiti’s Department of Civil Protection, the death toll was 1,297 as of Sunday afternoon.

Many seeing the recent events and international coverage are asking: How do we support? Where should we donate? These are hard questions to answer, because those most effective in humanitarian aid delivery are local groups, run by longtime Haitian professionals, that are a part of communities where they are respected and trusted. Yet there is often no direct line to get donations to these groups. 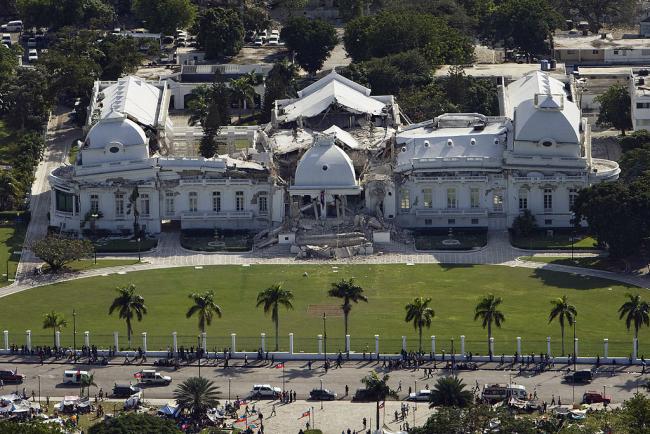 Experience from 2010 showed that the rush to donate immediately and to groups U.S. Americans recognize, such as the Red Cross, led to serious problems. This has been the subject of literally hundreds of articles and dozens of books. For one, Haitian government and NGO responders are still assessing the damage. Unfortunately, as disaster researchers have long pointed out, generosity is a function of media coverage.

If you need to donate now, invest in reinforcing Haitian capacity. Not only are local professionals better equipped with the linguistic, cultural, and social knowhow and relationships, they are closer to (or part of) impacted communities who need to define their own priorities. Here is an ad-hoc, working, evolving list of Haitian groups. Or consider reaching out to your local community foundation and “park” the funds while technical and logistical capacity to deliver aid are being built.

Let’s hope once and for all that NGOs learn—and apply—the lessons of the last earthquake and Hurricane Matthew in 2016, and follow new minimum standards for aid, among them to:

While Haitian people may lack financial resources, the response to the earthquakes must be a #HaitianSolution—solidarity not charity, built on justice, rights, relationships, and Haitian leadership.

A true Haitian solution also addresses root causes. Recent catastrophes like the 2010 earthquake continue to show that these are not natural disasters, but natural phenomena whose devastating impacts have been predetermined by human-made vulnerabilities.

These predisposed vulnerabilities have been shaped since Haiti’s inception. Michel-Rolph Trouillot argued that since Haiti’s independence in 1804, there was never a social contract between State and Nation. Robert Fatton has called Haiti the “Predatory Republic,” highlighting how state violence engendered a steady decline of living conditions in the countryside. The increasing desolation of the countryside drives many to leave their homes to cheche lavi, literally “looking for life.” Many search for livelihoods in the overcrowded, oversaturated urban informal economy that still provides more economic opportunity than andeyò (literally “outside”) due to the histories of calculated centralization to maintain political and economic power.

The U.S. Marine Occupation from 1915 to 1934 began this process of centralization, ramped up by dictator Francois “Papa Doc” Duvalier. The United States and international agencies like the International Monetary Fund extended steadfast support to the Duvalier regime, including knowingly funding the paramilitary tonton makout whose extrajudicial killings terrorized the people. This process sped up with international interventions that pushed policies that focused on less social protection and more access to markets. These policies made the wealthy wealthier following Duvalier’s son’s ouster in 1986, and this trend continued with the international NGO influx following the 2010 earthquake.

The most vulnerable in urban and rural areas are connected: after the 2010 earthquake, 630,000 people returned to their homes in the countryside to seek safe haven with friends and family. After Hurricane Matthew in 2016, families sent elderly and other vulnerable individuals to Port-au-Prince to protect them from the elements. In the past few months, some people have migrated back to their countryside origins to stay away from the insecurity that has plagued Port-au-Prince. Urban and rural poor people maneuver spaces that Fatton calls the “outer periphery” to survive in a system that marginalizes them daily.

August 14, the day of the latest earthquakes, also marks the 230th anniversary of Bwa Kayiman, a prayer to the ancestors led by Dutty Boukman and Cécile Fatiman that ignited the Haitian revolution. Referring to this ceremony, it will not be surprising to hear—like after the 2010 earthquake—that Haiti has made a pact with the devil, speaking blasphemy and continuing to disavow the Haitian revolution as has been done since its inception. Those impacted by the earthquakes today are the descendants of formerly enslaved people who broke the chains of chattel slavery and immediately were excluded in 1804 from the formation of the postcolonial state.

For their role as founders of abolition and Black liberation, the majority of Haiti’s people have been punished for their audacity to claim tout moun se moun, that everyone is a human. For six decades, the neighboring United States—beholden to Southern slaveholders, including eight presidents—made sure to extinguish any notion that Black Lives Matter. In 1862, as abolition on its own territory was nearing, the United States finally recognized Haiti.

Toward an Abolition Praxis

Today’s descendants of abolitionists are disproportionately vulnerable to death, whether as collateral damage in armed struggles over resources in Port-au-Prince’s popular neighborhoods or due to the lack of access to basic needs in the countryside, which also drives people to migrate to the cities. The names of those who leave us physically are never said, never remembered, or even acknowledged when living. Like those who have been killed by systematic state violence in the United States like George Floyd, Sandra Bland, Trayvon Martin, and so many others, these are the victims of state violence manifest as exploitation and neglect. They must be recognized and not forgotten.

Since July 7, following the assassination of President Jovenel Moïse, international coverage of the situation in Haiti outside of Port-au-Prince has been very limited. The countryside and specifically the Southern Peninsula had never recovered from Hurricane Matthew or the long-standing history of neglect of the postcolonial state. As of July, 4.4 million people were food insecure—about 46 percent of the population.

At this moment, aid is absolutely necessary. Well-intentioned aid must address current conditions shaped by long-standing histories of marginalization. We must also act in solidarity with efforts such as the Commission for a Haitian Solution. This process is attempting in several months to undo centuries of marginalization, state neglect, and foreign intervention. This ongoing dialogue shows that compromise and collaboration are a possible route to build a different future that honors abolitionist ancestors who dreamed of a free, liberated Haiti, a beacon for unfree people everywhere.

This dream has been deferred because of global racial capitalism’s ceaseless extraction. Making the dream a reality requires seeing the ties that already bind us together in solidarity: the racialized state violence that kills Black people in rural and urban America with or without the badge and gun has the same source as in Haiti. Working to defend Black lives in the United States necessitates supporting Black lives in Haiti, and vice versa. As Charlene Carruthers and other leaders in the United States have long articulated, Black liberation requires international action.

Hopefully—like 230 years ago—August 14 will crumble this old world order, what Haitian feminist Sabine Lamour called the “1915 paradigm,” rooted in the beginning of the unceasing U.S. occupation. We can make this happen by holding our own governments accountable, or better yet, drawing inspiration from Haitian activists and demanding true participation in setting foreign policy in the first place.

An abolition praxis is necessary as we move forward; the time has long since come for real solidarity and reparations.

K. Jessica Hsu is anthropologist and solidarity activist who is currently living in Haiti. She is based in Port-au-Prince now, but has spent most of her almost 20 years in Haiti in the commune of Abricots in the Grand Anse department. She is co-founder of Effective Aid for Haiti.

Mark Schuller is Professor of anthropology and nonprofit and NGO studies at Northern Illinois University and affiliate at the Faculté d’Ethnologie, l’Université d’État d’Haïti. Schuller wrote or co-edited eight books—including Tectonic Shifts: Haiti since the Earthquake and Humanitarian Aftershocks in Haiti—and co-director/co-producer of the documentary Poto Mitan: Haitian Women, Pillars of the Global Economy. Recipient of the Margaret Mead Award, Schuller is President of the Haitian Studies Association and active in several solidarity efforts.