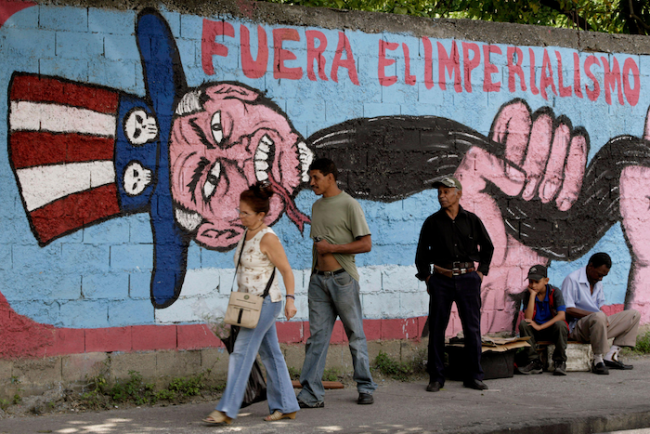 Since the 19th century, the histories of Haiti and the United States have often been connected. Besides the fact that they were the first two countries in the region to constitute themselves as independent states—Haiti in 1804 and the United States in 1776—contingents of Haitian fighters went to Savannah, Georgia to fight alongside U.S.-Americans in the War of Independence. Despite this parallel, the United States boycotted Haiti’s independence and stymied its development efforts for more than half a century. The white U.S. ruling elite operated from and enshrined white supremacy, including the idea that white people must dominate the world. With small variations, entrenched anti-Blackness both at home in the United States and abroad continues to underlie much of U.S. domestic and foreign policy.

Recently, as protests over the police shooting of Black man Jacob Blake shook U.S. cities for the third consecutive night on August 25, 2020, white teen Kyle Rittenhouse shot and killed two demonstrators in Kenosha, Wisconsin. Police then let Rittenhouse walk off the scene with his assault rifle dangling from his body, even as witnesses yelled that he had just shot people. Video footage from the same evening caught Kenosha police officers handing out water to a heavily armed militia group as one officer said, “We appreciate you guys, we really do.”

Days later in Haiti, a gang reportedly led by former police officer Jimmy “Barbecue” Chérizier killed more than a dozen people in the Port-au-Prince neighborhood of Bel-Air on August 31. The deadly episode marked the latest in a string of at least nine massacres since 2018 that have killed 306 people, left 55 missing, and orphaned 214 children. In both countries, whether faced with white militias targeting Black Lives Matter protesters or murderous gangs terrorizing poor Haitian neighborhoods, the state condones police brutality and paramilitary terror against dissident populations.

In Haiti, the proliferation of violent criminal groups is partly a product of U.S. foreign policy. The United States unconditionally supports the Haitian regime, which in turn has facilitated the expansion of gangs. Most weapons in Haiti, which does not produce arms, come from the United States. Yet this tacit seal of international approval comes as no surprise from a country where Black people continue to face deep systemic racism and where the dominant mindset remains firmly anchored in the tradition of the extreme Right and the Ku Klux Klan.

The United States’ treatment of Black Americans at homes offers perspective for analyzing the country’s foreign policy in Haiti and elsewhere in the hemisphere. Since the 19th century, the United States has never supported “democracy” in Haiti. The country’s relationship with the first independent Black republic has always been laced with domination, condescension, oppression and exploitation, and this is predictable in view of the segregation that the founding fathers and U.S. civil society installed. The Black Lives Matter movement could be a platform for solidarity.

It is increasingly clear that the U.S. Empire is in crisis. In its efforts to preserve and restore itself, the empire has promoted a descent into fascism both in the United States and elsewhere, including in Haiti.

In Haiti, the rise to power since 2011 of the bandi legal or “legal bandit” brand of toxic masculinity has exacerbated a culture of rape, corruption, and impunity, as Sabine Lamour discusses in another piece in this issue. Several government bureaucrats, influential media figures, and notorious gang leaders have been accused of systematic sexual assault and violence. The inhabitants of popular neighborhoods known to fight against their abandonment are frequent targets of state-sanctioned massacres. Although President Jovenel Moïse has been implicated in the squandering of at least $2 billion in PetroCaribe funds, the Core Group—the international community in Haiti, led by the United States—has unconditionally supported him since his election in 2016, which was widely considered to be fraudulent.

Under the cover of this international support for Moïse in recent years, gang violence has transformed entire districts of Haiti’s capital, especially working-class neighborhoods, into zones of exception. The country has become an open-air place to die, a human slaughterhouse: From January to August 2020, 944 people were murdered, according to the United Nations Integrated Office in Haiti (BINUH). There were 124 cases of kidnapping in the same period. In addition, according to BINUH figures, the national health system reported 998 cases of rape from March to August 2020, a very small minority of which were reported to police. An estimated 35 percent of the territory is under the control of armed gangs and paramilitary groups in the service of the government, and according to Jean Rebel Dorcénat of the National Commission for Disarmament, Dismantling and Reintegration (CNDDR), there are “no less than 96 armed gangs” operating across the country. Some 500,000 illegal weapons are currently in circulation.

So-called solidarity groups often express disbelief over U.S. support for the Haitian regime. But the U.S. state has repeatedly demonstrated that its claims to defend “democracy” are little more than empty rhetoric. Washington’s interventions in Haiti reveal that the illusion of democracy is more important to the imperial power than anything resembling the true will of the people. What is “democracy” according to the ideology of Haiti’s current government? What is the United States’ strategy in Haiti? And what are the similarities between U.S. domestic policy and its foreign policy in Haiti?

Haiti’s Meaning in the World

As the first to abolish slavery, Haiti was the first truly free and independent country in Americas. In 1803, under the leadership of Jean-Jacques Dessalines, the Indigenous Army gave a hell of a beating to the troops of Napoleon Bonaparte. And the West has never forgiven Haiti for this humiliation inflicted on the white race and the prevailing racist ideology of the time. The United States had gained its independence earlier than Haiti, but it maintained bondage on its cotton and tobacco plantations; in 1860, some four million people remained enslaved. It would take a four-year civil war (1861-1865) and the 13th Amendment to end slavery, at least on paper, though discriminatory practices continue today.