In the protracted fight for accountability in Ecuador’s Amazon, Steven Donziger is a victim of corporate retaliation, supporters say. 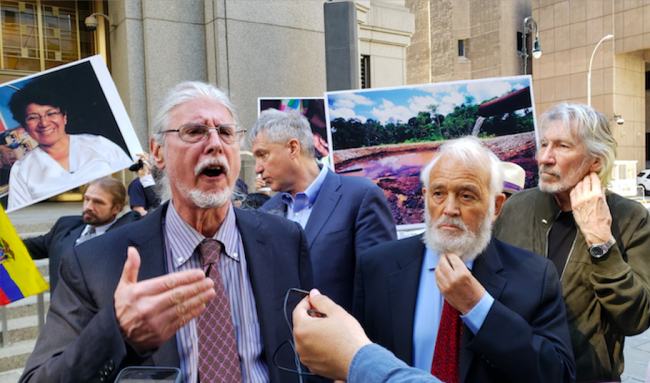 Having already served more than 700 days of house arrest, Donziger now awaits sentencing. He faces six months in jail as the culmination of a process he and his lawyers have called "a charade." Donziger was a fundamental part of the team of lawyers that sued Chevron in the early 1990s for toxic dumping in the Ecuadorian Amazon. After the case concluded in the affected communities’ favor in 2011, Chevron countersued Donziger in the United States for alleged fraud in the Ecuadorian courts.

“This is an outrageous decision,” Donziger said of his conviction. “I see it as an attack on human rights lawyering by the fossil fuel industry. It’s a violation for the rule of law and for our democracy.”

Judge Loretta Preska’s 245-page judgement said that Donziger had “repeatedly and willfully” defied court orders. “At stake here is the fundamental principle that a party to a legal action must abide by court orders or risk criminal sanctions,” she wrote.

Donziger’s lawyers say they are ready to appeal, while activists in Ecuador and New York continue to organize and fight for justice for Donziger and the Ecuadorian Amazon.

On August 6, people rallied in response to a global call to action from Indigenous communities and solidarity activists. In New York, activists and the Ecuadorian National Assembly member representing the diaspora, Salvador Quizhpe, gathered outside Donziger’s apartment. “We must grow our movement to prevent this corporate handbook from taking root,” Donziger said while briefly addressing the crowd. In Quito, Ecuador, people who lost relatives due to Chevron’s contamination joined others in demonstrating outside the U.S. Embassy. Agustín Salazar, a lawyer representing Amazon communities in the Chevron case, called Donziger’s conviction "a fraud propaganda that has sought to delegitimize a struggle of years." Other rallies were held at Chevron service stations in Los Angeles, Boston, Chicago, and Miami.

These are the latest shows of support demanding justice for the Amazon and for Donziger. On a Thursday in June, environmental activists and Ecuadorian immigrants gathered outside The New York Times’ offices to demand coverage of Donziger’s court case. With banners reading "Stop the Silence" and "Chevron is an Ecocide" and displaying images of the company’s devastation of the Ecuadorian Amazon, they called for justice on behalf of some 30,000 Amazonian Indigenous people who suffered years of oil contamination.

One of the organizers was Lino Wampustrik, an Indigenous shaman from the Shuar community in the Ecuadorian Amazon and a leader of Amazon immigrant communities in New York. "This fight is not only for the lawyer Steven,” Wampustrik said, “but for all Ecuadorians." 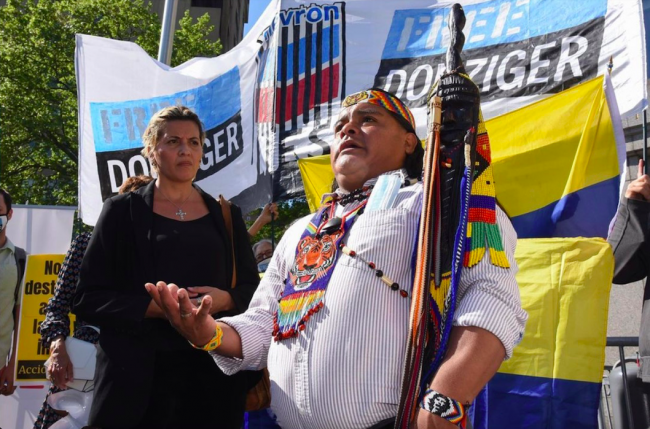 In 1992, Donziger, recently graduated from Harvard Law School, traveled to the Ecuadorian Amazon, where he observed the environmental damage caused by Chevron. Formerly Texaco, the company extracted oil in the country from the 1970s to the early 1990s.

According to Donziger's team, the company dumped, without proper environmental protocols, millions of gallons of toxic water and oil residues. The resulting pollution flowed directly into nearby rivers and streams and caused massive environmental contamination.

The damage to the ecosystem was followed by a visible deterioration in the health of the local Indigenous population, who suffered chronic illnesses, congenital diseases, and in many cases fatal outcomes.

Decades later, communities still struggle to mitigate pollution. Harmful substances such as benzene and mercury are still present in those Amazonian communities.

In 1993, about 30,000 local residents, including five Amazonian Indigenous groups, filed a lawsuit against Texaco. Donziger and Goldman Environmental Prize-winning attorney and environmental advocate Pablo Fajardo decided to represent them.

A legal battle that would last 25 years ensued. Initially, Chevron, then Texaco, was sued in a New York court, but the corporation successfully fought to have the lawsuit moved to Ecuador. After years of legal wrangling, Donziger's team of Ecuadorian lawyers achieved a victory.

In 2011, an Ecuadorian judge ordered Chevron to pay $18.2 billion for "extensively polluting" the Lago Agrio region in the Ecuadorian Amazon. Ecuador's highest court upheld the verdict a year later. However, it reduced the amount of compensation to $9.5 billion.

Chevron never complied with the ruling. The oil company questioned the "legitimacy" of the verdict, claiming that the ruling was obtained through fraud and bribery. In addition, Chevron’s lawyers maintained that the company complied with the relevant environmental reparation requirements. They attributed the damage to Petroecuador, the Ecuadorian state corporation that subsequently took over oil exploitation in the region.

Chevron sued Donziger in New York court under the Racketeer Influenced and Corrupt Organizations (RICO) Act. The company transferred to the United States a former Ecuadorian judge, Alberto Guerra, who testified that Donziger’s team had bribed judges in Ecuador. In 2014, U.S federal judge Lewis A. Kaplan ruled that the Ecuadorian judgment against Chevron "was the product of fraud." Guerra—who received cash and benefits from Chevron totaling $2 million, according to Donziger—later admitted he lied about the bribery, but the case continued.

Since then, Chevron has led an intense smear campaign against Donziger and his supporters. Judge Kaplan ordered Donziger to turn over his phones and computers so Chevron could examine evidence of the fraud. Donziger refused, claiming that this would violate the principle of attorney-client privilege. However, his failure to comply resulted in charges of criminal contempt of court, punishable by a maximum of six months in jail. 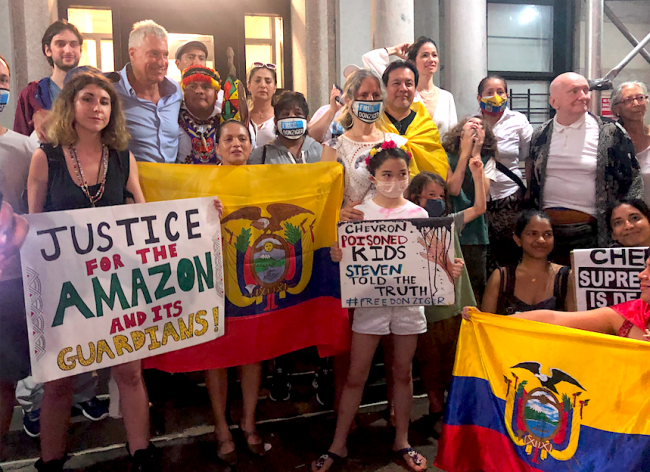 Donziger became the first person in U.S. history to be the target of a corporate lawsuit by an oil company. He has remained under house arrest with an electronic shackle on his ankle for a period longer than his forthcoming sentence.

Donziger and his team have repeatedly pointed to ties between Chevron and Judges Kaplan and Preska. Kaplan is a former corporate lawyer who held investments in Chevron, and Preska is a member of the Federalist Society, a conservative legal organization that has received funding from Chevron. In a move Donziger decried as unconstitutional, the case was tried by private prosecutors, who worked for a law firm that had represented Chevron.

In May this year, Donziger's contempt trial in Federal District Court in Lower Manhattan was not livestreamed, meaning people who wanted to follow the proceedings, especially from Ecuador, were not able to do so.

On the first day, the Judge Preska appeared distracted, reading the newspaper in the middle of the trial. She repeatedly interrupted Donziger's lawyers to tell them to lower their voices. On the last day of the trial, she wore a mask in the colors of the U.S. flag.

Rallies called by activists supporting the lawyer, including actress Susan Sarandon and musician Roger Waters, marked the beginning and the end of the trial. "This is an abuse of human rights; the judicial system is corrupted," Waters told the media.

Donziger appeared before the judge but refused to testify at the request of his lawyers, arguing that it was an orchestrated trial and "a sham."

Donziger’s case has attracted the attention of environmental activists and figures from various fields. Human rights defenders, students, artists, intellectuals, various Nobel laureates, and environmental activists, including Greta Thunberg, have called for his release, pointing to his case as an example of corporate abuse of the judicial system. In April, six Democratic members of Congress, including Rep. Alexandria Ocasio-Cortez, wrote to Attorney General Merrick Garland asking him to review the case.

In Ecuador, the Chevron case was quite prominent when Rafael Correa was president. A media campaign under the banner "La Mano Sucia de Chevron" raised awareness by bringing to light and denouncing the damage to the Amazonian ecosystem. Famous people involved in environmental defense, like Danny Glover and Mia Farrow, were invited to tour Lago Agrio to personally verify the situation and feel with their own hands the toxic waste lying on the jungle floor.

When Correa left power in 2017, the subsequent government of President Lenín Moreno downplayed the issue, and the campaign faltered. Opposing interests arose within the government that cast doubt on the progress in the case. A former Correa ally, Moreno turned against “correísmo.” Correa was accused of using public funds to “manipulate public opinion” in the campaign against Chevron.

In 2018, the international tribunal in The Hague ruled in favor of Chevron, arguing that the 2011 Ecuador Supreme Court ruling had been obtained through fraud, bribery, and corruption.

This ruling puts the Ecuadorian state on the hook for having to pay millions in compensation in favor of Chevron, though an exact amount has not been specified.

Despite the coverage U.S. media has given to the development of Donziger’s case, in Ecuador, no mainstream television network covered the trial. This lack of coverage is largely due to the polarization of Ecuadorian politics between correísmo and anti-coreismo.

Donald Moncayo, a representative of an organization for those affected by Texaco-Chevron, points out that the communities are not involved in Donziger’s trial, but he sympathizes with his situation. “Our common enemy is Chevron. It is a war that we have both faced and all the persecution that the oil company has done to the lawyer is unfair.” Moncayo said.

He added that communities continue to fight against the extractivist intentions of the new Ecuadorian president, conservative former banker Guillermo Lasso, who has mentioned that he "wants to boost the economy through the exploitation of natural resources and the increase in oil production." Lasso has set the objective of “doubling oil production.”

In the meantime, Donziger’s attorneys have vowed to appeal, and the lawyer has said he is considering all legal avenues.

Gabriela Barzallo is an independent journalist and aspiring-documentarian from Ecuador based in New York City. She writes about human rights, environmental justice, and Ecuadorian politics. She has worked at Democracy Now! Twitter @gabybarzallo