From Trump to Biden in Latin America

The Biden administration holds significant political tools for navigating relations with Latin America. How will it leverage this power? 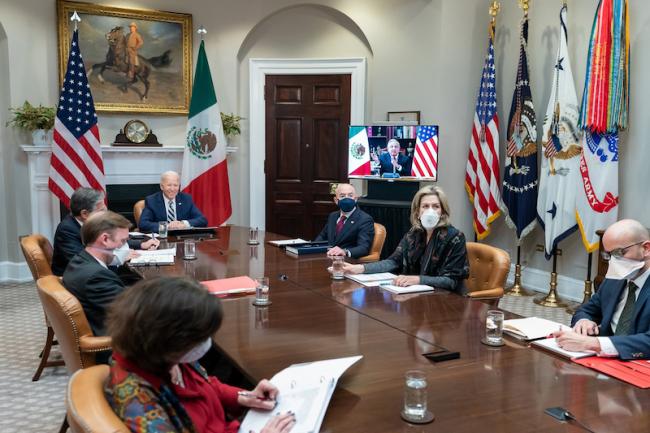 Standing in the ornate Hall of the Americas in 2013, Secretary of State John Kerry proclaimed the death of the Monroe Doctrine. Four years later, Kerry’s successor Rex Tillerson exhumed the old doctrine: “I think it’s as relevant today as it was the day it was written,” he said before starting a tour of Latin America. Initially dismissed by some as a curious gaff, in its arguments against Chinese influence in Latin America, the Trump administration continued a revival of Monroe’s 1823 denunciation of extra-hemispheric powers.

However, the invocations of Monroe masked a strategic vacuum. Aside from browbeating Latin American leaders about migration, the Trump administration lacked a consistent approach to the region. The dominant ethos was one of short-term transactionalism, as with Mexico and Central America, and personalized praise with minimal policy follow through, as with Brazil. Regarding perceived adversaries like Cuba and Venezuela, policy was warped by pressures from several members of Congress and narrow electoral interests.

The new administration of President Joseph Biden is more rhetorically attuned to Latin American concerns, both because of the makeup of his team and Biden’s own longstanding connections to regional leaders. As a young senator, Biden cut his teeth in the battles over human rights and the 1978 Panama Canal treaties, which gradually returned the canal and adjacent lands to Panama’s control. Later, he emerged as a strong advocate for Plan Colombia, and the government of Colombian President Andrés Pastrana saw him as an ally. As vice president, Biden spearheaded the Obama administration’s economic dialogue with Mexico and its security and migration approach to Central America. Now, his team includes committed multilateralists and liberal internationalists in prominent positions, as well as seasoned Latin American policy hands and Latinx officials.

For all those reasons, there is little doubt that Biden’s discourse will re-bury the Monroe Doctrine. Will his policy do so as well?

Whether Monroe is buried or not, elements of this thinking are deeply embedded in U.S. policies. Often, such fretting has its roots in comparison with a misplaced, Monroeist nostalgia for levels of unchallenged U.S. control that never existed, as well as a shallow understanding of the nature of U.S. power in the hemisphere.

While it is common to read sweeping proclamations of unbroken U.S. “domination” or “hegemony” over Latin America stretching back to 1823, the history of the Monroe Doctrine is less clear-cut. Initially, the United States lacked the clout to back up the proclamation with force. Instead, the policy co-existed with—and depended upon—extensive British influence throughout the Americas. While the transition from U.S. to British predominance in Central America was under way by the middle of the 19th century, U.S. influence elsewhere in the hemisphere continued to vary geographically and over time. U.S. leadership claims faced challenges from Latin American and extra-hemispheric actors. The meaning of the doctrine also changed from presumptuous to interventionist as the United States intervened in, and then occupied, Cuba in the 1898 war against Spain. Perceived challenges to U.S. influence consistently make U.S. policymakers nervous.

Such fears also often misunderstand the nature of U.S. power. In 1987, political economist Susan Strange presciently argued that recurring, exaggerated rumors of the death of U.S. hegemony overlooked how U.S. power remains deeply embedded in global structures of security provision (or credible threat), production of goods and services, finance and credit, and influence over knowledge. In Latin America, the United States has only lost serious ground in the production of goods. Chinese lending has declined since 2015 and nearly disappeared since the onset of the pandemic; U.S. control of the financial infrastructure remains. While the Trump administration bungled the public health response to Covid-19, the U.S. Treasury demonstrated its ability to throw lifelines to U.S. partners, as political scientist Carla Norrlöf shows. The United States retains its lead in military power and knowledge infrastructure in Latin America. The structural power built over a century retains deep roots.

Trump’s transactionalism created some short-term “wins” while eroding the long-term basis of structural power. But the Biden administration retains tremendous tools and leverage in Latin America. It may marshal these into competition with China or into supporting a more positive transition in its foreign policy towards the region.

At the international level, Latin America has changed dramatically in recent years. Two elements stand out. First, starting in the mid-2000s, a chasm opened between the economic orientations of most of South America and those of Mexico, Central America, and much of the Caribbean. The cause, essentially, was Chinese commodity demand. Chinese imports flooded most of Latin America equally, but Chinese purchases of Latin American exports—and relatedly, China’s provision of finance—were highly unequal. The end of the “China boom” after 2013 represented a dramatic reduction of commodity demand, but China remained the leading provider of imports to most of Latin America.

Second, regional leadership has fragmented since Biden’s time as vice president, sinking regional institutions. Most prominently, the Union of South American Nations (UNASUR)—once the great hope for new, multidimensional regional cooperation without the United States—collapsed in 2018 among divisions over ideology and Venezuela policy. It has not been replaced with any meaningful mechanism for regional coordination. Among major contenders for regional leadership, Brazil’s Bolsonaro is hostile to perceived “globalism,” while Mexico’s López Obrador spares little time for foreign policy. With few exceptions, the region struggles to enunciate a shared agenda.

Tom Long is associate professor in the Department of Politics and International Studies at the University of Warwick and affiliated professor at the Centro de Investigación y Docencia Económicas, Mexico. He is author of Latin America Confronts the United States: Asymmetry and Influence (Cambridge University Press, 2015).