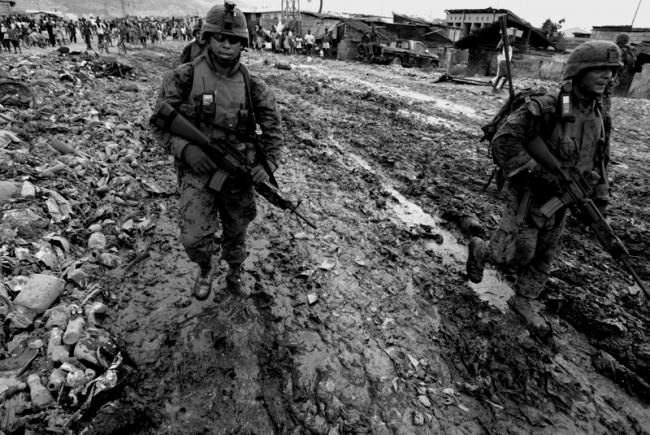 The fall of the Duvalier family dictatorship in February 1986 inaugurated a new cycle of violence in Haiti. Initially, the country faced episodes of violence perpetrated by paramilitary structures implicated in systematic human rights violations. These armed groups actively participated in forging new forms of violence in both urban and rural Haiti, maintaining vestiges of the old regime’s system of terror. Manipulated by neo-Duvalierists, mafia networks, or drug traffickers, these armed groups have been used as death squads with the mission of terrorizing popular spaces and repressing supporters of the Haitian social movement, as scholars such as Laënnec Hurbon have documented. Over time, other armed groups gradually developed in the country’s main urban centers, taking residents of poor and marginalized neighborhoods hostage.

The new forms of violence in Port-au-Prince and certain provincial towns are rooted in decades of political turbulence. After the forced departure of President Jean-Bertrand Aristide in February 2004, generalized chaos reigned in Haiti. Supporters of Aristide took up arms to demand the return of their leader, while ex-soldiers regained control of their old barracks, which had been transformed into police stations after the dismantling of the Haitian Armed Forces (FAD’H) in 1995. These ex-soldiers tried to exercise police functions by carrying out routine patrols and by making arrests deemed illegal by human rights bodies. These former soldiers demanded payment of several years’ salary and even threatened to rise up against the interim government that succeeded Aristide.

This generalized chaos was profitable for networks of drug traffickers and armed gangs operating in precarious Port-au-Prince neighborhoods. Different political actors exploited this situation, and even non-political crimes were attributed to the chimè, zealous supporters of Aristide accused of being gangs deployed by his Fanmi Lavalas party. Amid the profound confusion between political violence and economically motivated criminal actions, armed groups multiplied in various poor urban neighborhoods. According to the Cadre de Coopération Intérimaire and my research, at least 11 armed groups with various motivations have been identified in the country, including former FAD’H soldiers, former police, territorial gangs, and others.

To face this situation of terror, Haitian authorities have relied on two types of intervention: militarized intervention aimed at confronting armed groups and humanitarian-style intervention led by NGOs with proven and essential skills in conflict management and resolution programs. Both have failed to rein in and disarm violent groups.

NGOs like Viva Rio, AVSI Foundation, and Concern Worldwide have been the privileged associates of Haiti’s security apparatus. With huge financial resources, these actors work in concert with local associations they call “partners,” but which are essentially non-governmental subcontractors. NGOs focus on neighborhoods such as Cité Soleil, Martissant (Grand-Ravine, Ti-Bois, Cité de l'Eternelle, Village du Dieu), and Grand Bel-Air (Rue St-Martin, La Saline, Fort Touron, Bas Delmas, Fort National, Solino, and others). These are areas historically marked by economic and social inequalities caused by globalization, as Marc Abélès has documented. Haitian geographer Jean-Marie Théodat describes these marginalized neighborhoods in Port-au-Prince as “sans” places—those “without.” That is, they are neighborhoods where the state is absent and where the population does not have access to basic social services. In these places, NGOs are forced to come to terms with deviant groups, and their actions contribute to a kind of “archipelization” of poor and marginalized neighborhoods.

In my research in various marginalized neighborhoods of Port-au-Prince in recent years, I have observed the disorganization of community groups and a chaotic management of aid intended for poor populations. I use the concept of archipelization to explain this phenomenon. Archipelization refers to the fragmentation of precarious neighborhoods not only by the action of NGOs that compensate for the absence of the state, but also by the emergence of armed gangs who impose themselves as informal authorities. These two main actors, NGOs and armed gangs, are motivated by their own interests: NGOs try to remedy the shortcomings of the state through projects financed by international donors, while the armed gangs, following a survival logic, ensure the distribution of food rations to poor families and organize sports and sociocultural activities. This co-management strategy contributes to territorial fragmentation whereby an archipelago of neighborhoods ends up beyond the control of the central state and local authorities, who become figure heads.

In general, an archipelago is made up of a set of islets—or blocks of houses—located relatively close to each other. In the field of urban management, Sylvy Jaglin defines archipelagos as “configurations dominated by political-functional discontinuities resulting from the compartmentalization of services into autonomous isolates, and spatial discontiguities resulting from the fragmentation of territories made up of insular, inward-focused urban blocks.” However, Valérie Messer argues that Jaglin’s use of the term at the neighborhood level does not take into account the relationships that may exist between these islets. Messer employs Pierre Veltz’s definition of the archipelago as “an ultimate form of the network, a networked territory in which the poles are points of intersection”—that is, a territory made up of focused centers that are linked and have relationships to each other.

From this perspective, I use the notion of territorial archipelization to describe the process of a multitude of actors each carving out a turf within the poor neighborhoods they control without worrying about others’ actions in the area. This phenomenon is ubiquitous in Port-au-Prince’s marginal communities, where each NGO defines its area of ​​intervention without taking into account the actions of its neighbors.

Djems Olivier has a doctorate in geography from the University of Paris VIII Vincennes-Saint-Denis, where he worked with the Laboratory of Social Dynamics and Spatial Reconstruction (LADYSS). His research questions humanitarian practices in precarious neighborhoods of southern metropolises, particularly in Haiti.