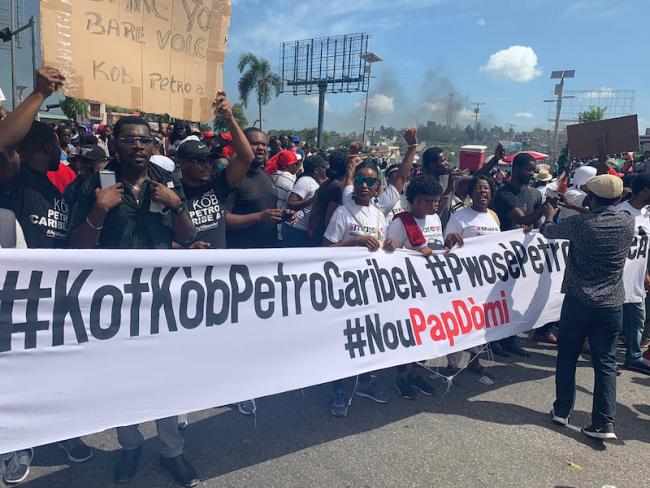 Months after Haitians began asking “#KòtKòbPetwoKaribeA? Where are the PetroCaribe funds?” in August 2018, a new hashtag emerged: #NouPapDòmi. Ramping up pressure in the growing anti-corruption movement, activists camped out in front of the Court of Auditors in Port-au-Prince in December 2018. They dubbed their action Nou Pap Dòmi, meaning “We are watching,” or literally, “We are not sleeping.” The Court of Auditors, at the time due to release an initial report on the PetroCaribe scandal, later implicated several government officials and business figures in the suspected embezzlement of nearly $2 billion in funds earmarked for development and social projects. As a collective, Nou Pap Dòmi (NPD) became a current within the grassroots PetroChallengers anti-impunity movement.

In this interview with Mamyrah Dougé-Prosper and Mark Schuller, NPD members James Beltis and Vélina Charlier discuss the movement, their collective organizing, and the prospect of a long-term project of building political power in Haiti. The conversation has been edited for length and clarity.

How do you in NPD understand the political situation of the country today?

James Beltis: Today, we understand that the country is facing a long-standing systemic crisis. Since the assassination of [Haitian liberator] Jean-Jacques Dessalines, we have not succeeded in orienting the country towards the path of progress in the interest of all. It is a country that has managed to build itself for 200 years by excluding the majority of the population. It is a state built on social injustice on the one hand, and corruption and impunity on the other.

So, the situation we are currently experiencing is the continuation of a succession of crises that the country has faced since independence. The first erupted after the assassination of Jean-Jacques Dessalines [in 1806], then there was the Caco-Piquet crisis [in the mid and late 1800s], then the U.S. occupation [from 1915 to 1934]. The most recent was the crisis of 1986 [when the Haitians ousted the Duvalier regime]. And since then, our transition to democracy has been marked by periods of turbulence and political violence with various abuses against the population.

Of course, Haiti is not solely responsible for the failure of our democratic experience so far. The international community, particularly the United States, has played an important role in this regard by manipulating the electoral process to favor candidates in their interest and by imposing neoliberal policies that have proven harmful to the country’s economy. In the current crisis, Washington, especially the Trump administration, has played an important role in providing unconditional support to the Haitian Tèt Kale Party regime and President Jovenel Moïse, despite the PetroCaribe corruption scandal and various human rights violations, including massacres in the popular neighborhoods of Bel-Air and La Saline.

This crisis has prompted young people to get involved in the fight against corruption. This is how we joined. Corruption and impunity are at the root of the Haitian crisis. A few benefit from public wealth to the detriment of the whole society—with impunity. Because these issues expose the nature of the Haitian state, it is difficult to address them without disrupting the foundations of society. There is no way to create cohesion between people and the way things are. The social contract is broken. The country is in total disarray.

How does NPD come to agree on its analyses or the types of actions it takes?

Vélina Charlier: Nou Pap Dòmi is a collective of PetroChallengers. It is composed of concerned and engaged citizens. Some of us were already activists. Others are members of political parties. Others were in other organizations. Some are organizing and protesting for the first time. When the PetroChallenge came out on social media, we thought that the word had to spread further. So, we organized sit-ins. We [the PetroChallengers] organized different protests: October 17, 2018 and November 18, 2018. We pressured the Court of Auditors to perform an audit of the PetroCaribe funds and waited for the first report. At that time, many PetroChallengers were worried about keeping the movement alive because it had no clear ideology. The first activity that we [NPD] organized was called Nou Pap Dòmi (We are not sleeping), where we spent three nights and two days in front of the Court of Auditors at the end of December [2018]. Solidarity built up after this activity, and we realized that we had more in common than we thought. We came together again to constitute ourselves as a collective.

It is really important to emphasize the collective’s plurality. Many young and less young people met and discovered they had the same vision for the country, even though their political ideologies were not the same. Some are leftists. Some are center left. Others are still searching. The collective allowed us to learn about Haitian citizens and to work in groups.

Nou Pap Dòmi has a flat organizational structure. That is why, within NDP, there is no spokesperson, general secretary, or director. We are all members of NDP on an equal basis. Many people can speak on behalf of the collective because it is important for us not to rely on a singular leadership.

We wanted to break the myth of the Messiah whereby a single rescuer will come to save Haiti. It is the society as a whole that must and will solve Haiti’s problems. This is the mentality that we try to apply in NDP, and we make our decisions by consensus, where we force ourselves to discuss things that we disagree on. Of course, because of this, it takes us more time to reach an agreement on what we decide to do, but it’s healthier.

This learning process was very important for us: collaborating with each other, exchanging ideas without getting mad, coming together for the common good. This is the kind of learning experience that the Haitian education system doesn’t afford. Rather, this system creates small individuals who keep their heads down, who take orders, who simply obey. Nou Pap Dòmi is a collective of rebels who dare to go against this system.

Interview conducted by and translated from Kreyòl by Mamyrah Dougé-Prosper and Mark Schuller.