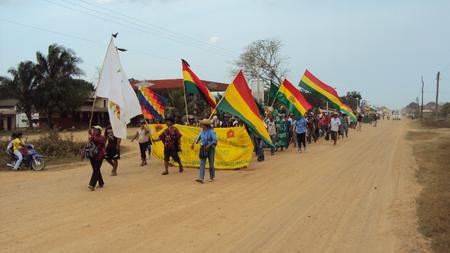 August 15: The Eighth Grand March of the Indigenous Peoples of Bolivia sets off from the city of Trinidad in Bolivia’s Amazon region. During the 65-day march, conditions were harsh. Protestors lacked sufficient water, food, and suitable shoes for the sweltering heat of the Amazon region and the bitter cold of the Andean highlands. (credit: Communications Commission of the march) 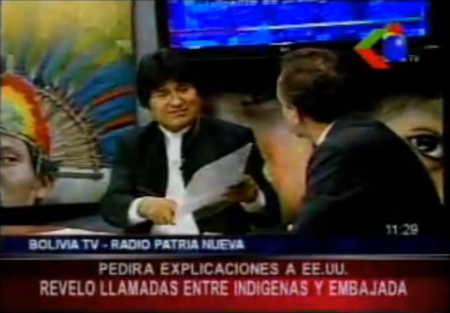 August 21: President Evo Morales accuses the indigenous march of links to the United States. On live television, Morales shows logs of calls between the U. S. embassy and several leaders of the march implying the march had connections with the U.S. His announcement sparked intense debates over whether to expel the U.S. development agency USAID from Bolivia. Nevertheless, to date, the government has failed to provide substantial additional evidence linking the march to the U.S. government, and has not made a decision on USAID. (credit: Canal 7 El Pueblo es Noticia) 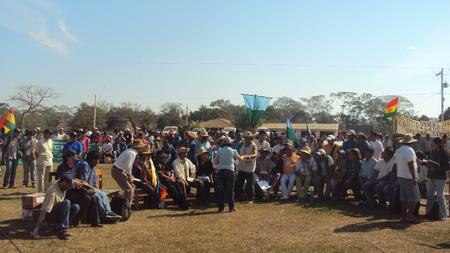 September 5: The 2nd attempt at dialogue to resolve the TIPNIS issue failed in the town of San Borja. In total, there were eight failed attempts at dialogue between government ministers and the march leaders, causing the Bolivian government to accuse the marchers of a hidden agenda, and of intentionally avoiding a resolution to the issue. The marchers countered that every time they tried to establish dialogue, the government told them there was no alternative—the road had to go through the TIPNIS reserve. The marchers argued they should have been consulted prior to the construction of the road, as required by the Bolivian Constitution and international norms. After the second failed dialogue in San Borja, the march continued west until it reached the town of Yucumo on September 20, about 186 miles from La Paz, where it was blocked by the police and the Confederation of Intercultural Communities of Bolivia, a movement of migrant settlers, or colonizadores, allied to the government. (credit: Communications Commission of the march) 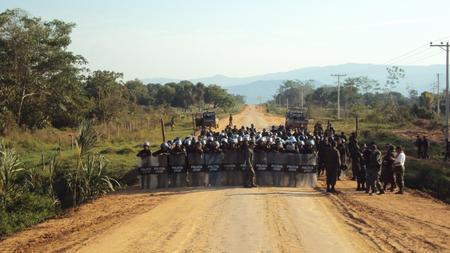 September 25: On September 25, 500 riot police violently repressed the 800-person march, injuring dozens. Among the marchers were children, pregnant women and elderly people. “Hundreds of police surrounded us for 45 minutes. We told them to go. Then they started tear gassing us and firing rubber bullets everywhere. They just didn’t care what happened,” said indigenous leader Walberto Baraona, who was present. The police action was widely condemned across Bolivia, provoking the resignation of several ministers. In an amazing show of solidarity, residents of the town of Rurrenabaque forced police to release 100s of marchers, who had been detained and were being held on buses for over 12 hours. (credit: Communications Commission of the march) 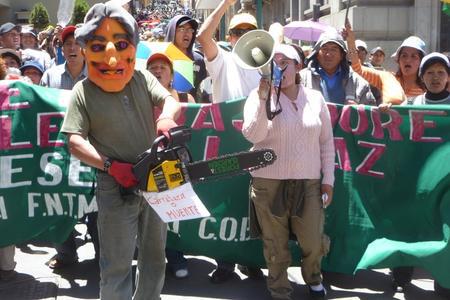 September 28: As details of the police action began to emerge, including the beatings and detentions, people across the country marched to reject the police brutality and to demand justice. President Morales held press conferences for three consecutive days in an attempt to calm the situation. Apologizing for the incident, he said he did not give the order, but declined to reveal who did. The Bolivian government continued to defend the road project and proposed the idea of holding a referendum with the populations of the Beni and Cochabamba regions. (credit: Dario Kenner) 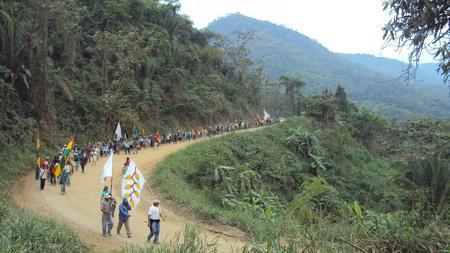 October 2: Despite the September 25 police violence, the march starts again in the tropical Yungas region. The leaders of the march made it clear they were determined to get to La Paz and force the government to pass a law prohibiting a highway through TIPNIS. (credit: Communications Commission of the march) 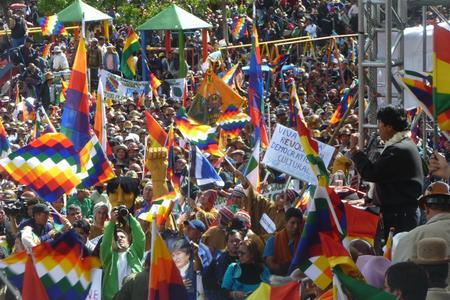 October 12: Bolivian President Evo Morales speaks to supporters in the Bolivian capital. La Paz was brought to a standstill when a huge march by cooperative miners, campesinos, agrarian unions, and indigenous social movements mobilized in support of the Bolivian government. There were also pro-government events in Trinidad, Sucre, Cochabamba, and Santa Cruz. In a speech on the 519th anniversary of the European invasion of Latin America, Morales reminded Bolivians of the struggle against colonialism and called for unity. (credit: Dario Kenner) 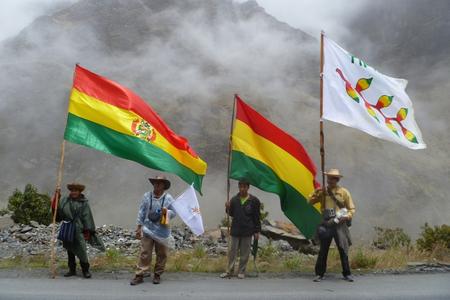 October 17: TIPNIS march approaches La Paz. As marchers neared the end of their trek through the Andean highlands, pressure increased on the Bolivian government to cancel the road project. Facing altitudes of over 12,000 feet, this was the most difficult part of the march, especially for indigenous peoples from the Amazon, who had difficulty acclimatizing to the altitude. (credit: Dario Kenner) 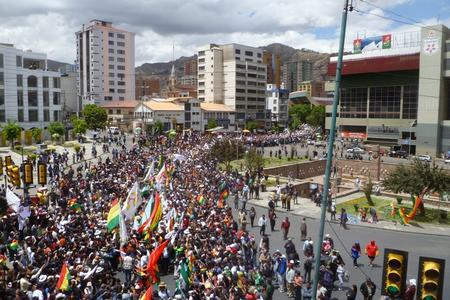 October 19: Tens of thousands line the streets of La Paz to welcome the TIPNIS indigenous march. Due to the massive crowds, the marchers took 7 hours to wind their way to the city center. “You are not alone,” shouted people along the route to the marchers, who were visibly moved by the positive reception. There was a carnival atmosphere as people celebrated the marchers’ achievement with live bands, cheering, and confetti. (credit: Dario Kenner) 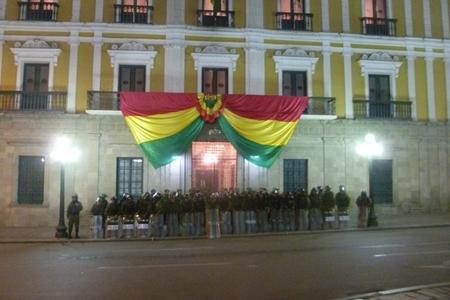 October 20: Bolivian police guard the Presidential Palace. The expected dialogue between the indigenous peoples and President Evo Morales did not begin immediately. Instead, the marcher’s first full day in La Paz was marked by tension and uncertainty, as it appeared that the long-awaited negotiations to solve the TIPNIS issue might not happen. The marchers were clear that the Bolivian government had promised to meet them in the Presidential Palace, but President Morales said this was not possible because it was being refurbished. Tensions increased during the day as police blockaded the square with barricades separating the indigenous marchers into two groups. Some youth briefly clashed with the police, but things soon calmed. (credit: Dario Kenner)

Dario Kenner
Thursday, November 3, 2011
On October 21, Bolivian President Evo Morales announced an agreement to scrap a controversial plan to build a highway through the TIPNIS Amazonian ecological reserve. The president’s decision came just two days after over 1,000 indigenous protesters from the TIPNIS region arrived to the Bolivian capital, La Paz, after marching 370 miles against the highway project. For the indigenous marchers, Morales’s announcement was even more victorious, coming less than a month after Bolivian riot police tried to violently break up the march near the Bolivian town of Yucumo on 25 September.
The march began on August 15 in the Bolivian lowland city of Trinidad, and was led by the Confederation of Bolivian Indigenous Peoples (CIDOB) and the National Council of Ayllus and Markas of Qullasuyu (CONAMAQ), who demanded their right to be consulted over the road construction. Such prior consultation, they say, is enshrined in the new 2009 Bolivian Constitution and international treaties, including the International Labor Organization’s Convention 169 and the UN Declaration on the Rights of Indigenous Peoples—both ratified by Bolivia.
Despite its discourse in support of the indigenous right to prior consultation, the Bolivian government failed to consult the TIPNIS communities before signing a contract with the Brazilian company Construtora OAS in 2008 to build the road, and before beginning construction on the road this year. President Evo Morales, at the time, claimed the road was vital for national integration and development. The indigenous marchers argued that a road through TIPNIS would threaten their existence and the way of life of future generations. Indigenous marchers have always said they are in favor of a road that does not go through TIPNIS.
This photo essay is a look at some of the defining moments of the two-month-long TIPNIS march, from Trinidad to La Paz; from resistance to victory.

Based in La Paz, Dario Kenner works on climate change and the environment with indigenous social movements by accompanying indigenous leaders at the UN climate change negotiations, and researching the Green Economy in preparation for the Rio+20 UN summit. For more TIPNIS news, analysis, and interviews see his blog, Bolivia Diary, or NACLA’s blog, Rebel Currents.