Lessons from the Zapatista Escuelita 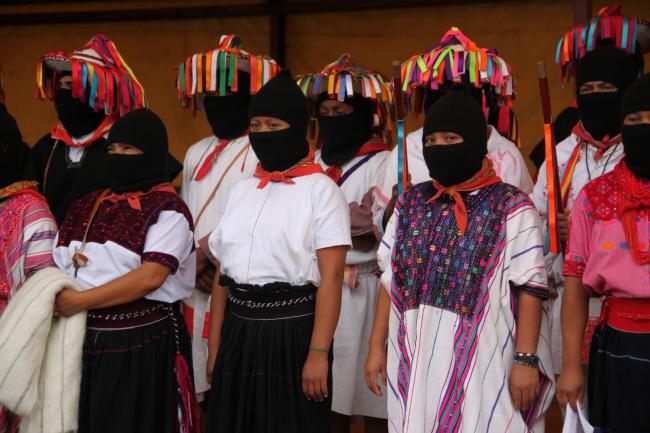 Zapatista authorities at the closing ceremony of the escuelita in Oventic. 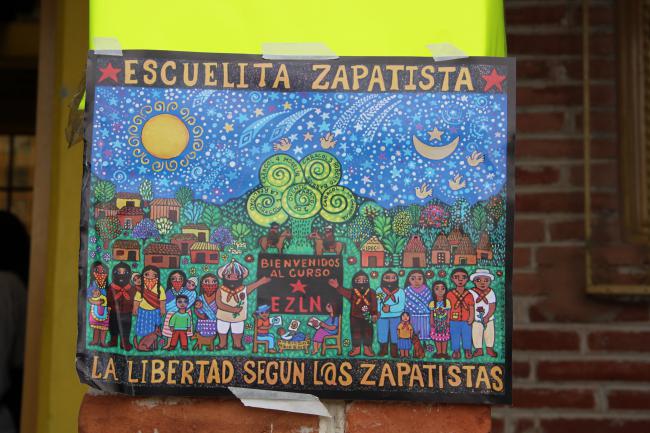 "Escuelita Zapatista: Freedom According to the Zapatistas." 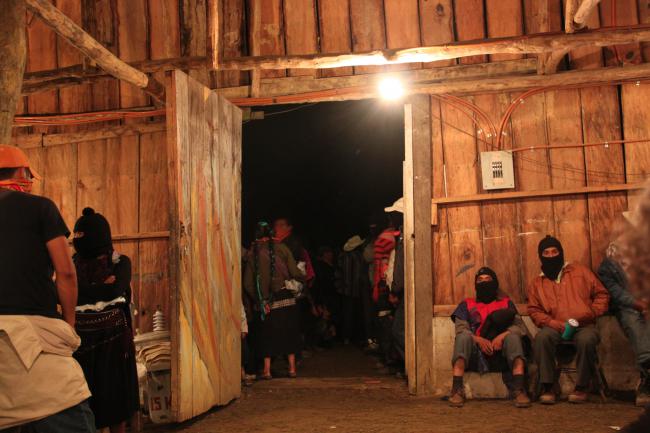 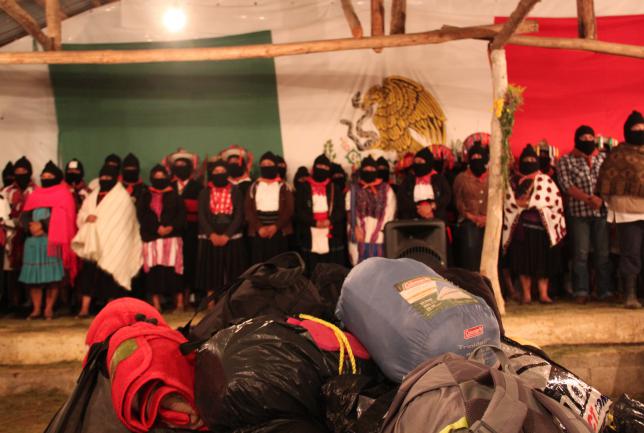 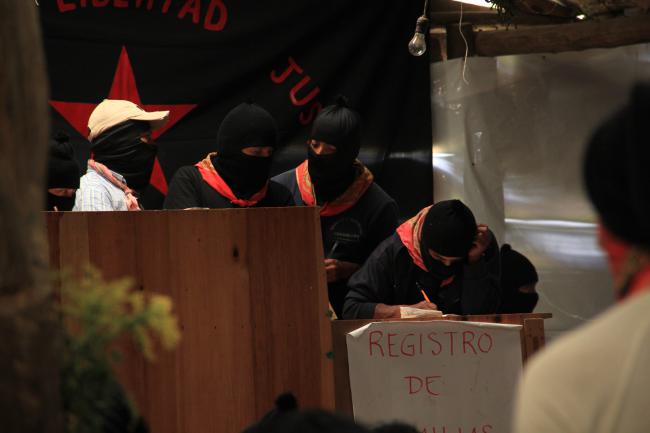 The escuelita was organized by the Zapatistas' civilian supporters. 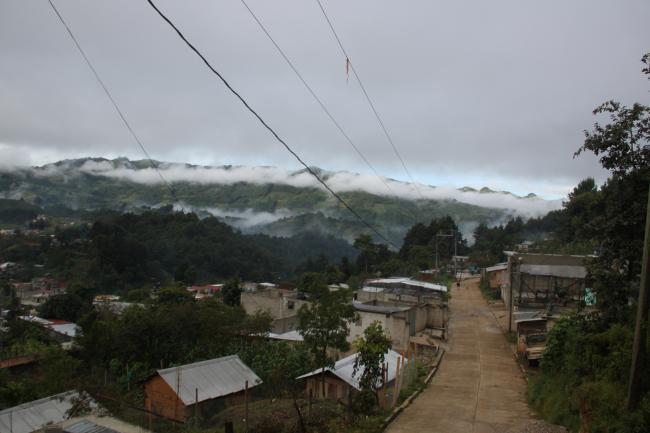 The towns where students lived were home to both non-Zapatistas and Zapatista civilian supporters. 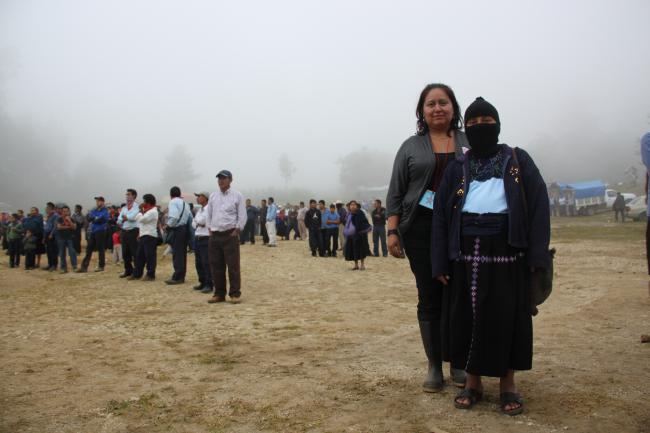 Aida from Brooklyn, NY, with her guardian. 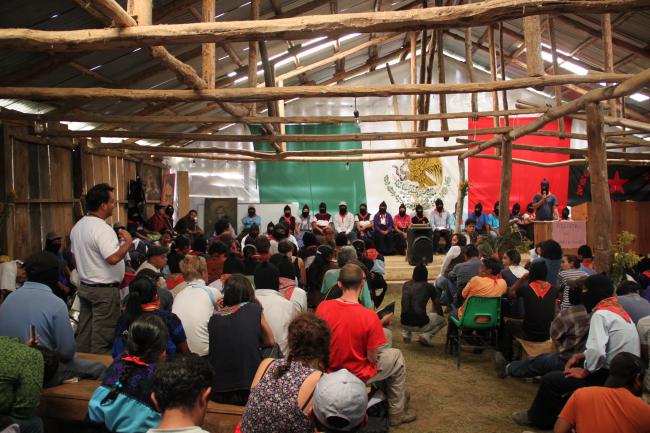 Students at the opening day of the course at Oventic. 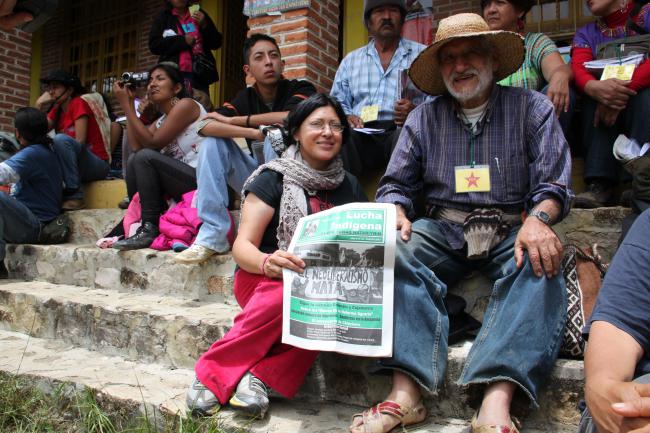 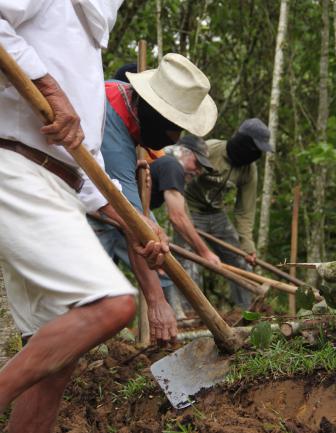 We arrived at Oventic in Chiapas, Mexico, around midnight, and stumbled from our bus into a roar of rhythmic clapping. The Zapatistas who were organizing our training had carved a path for us, gathering in the hundreds to welcome us to their territory. For the next five days, we joined nearly 1,700 other people from around the world and the four other caracoles, or self-organized Zapatista autonomous regions. We were to become "first grade" students in a radical educational experiment, in which, for a short period of time, we would participate in and learn from Zapatista autonomy.

The experiment's name was "the escuelita (little school): freedom according to the Zapatistas," and took place from August 12 to 16, 2013. I was there with three other co-organizers from La Unión, a community organization in Brooklyn. For our inscription fee of about $20, we received four textbooks, five days of food and lodging in Zapatista territory, and the guidance of a "guardian." After meeting our guardians in Oventic, we traveled with them to their communities.

For the next three days, we lived and worked alongside these guardians and their families. We read and discussed our textbooks with them. They answered our questions and we answered theirs. We learned the basics of the Zapatistas' autonomous government system, the Zapatista conception of women's roles in families and self-governance, and the Zapatista notion of "autonomous resistance." Through the relationships we built with our guardians and their families, we learned intimately about the multiple realities and challenges of Zapatista autonomy.

The zapatista families living within my guardian's town were not unlike other Mexican families. They sell Coca Cola in their stores. They receive remittances from California. They own private land. As zapatista families, however, they participate in autonomous government, running their own schools, justice system and hospitals. Through owned privately, their plots are worked collectively. I asked my guardian if balancing this "mainstream" life with Zapatista autonomy was hard. He seemed to see no conflict. "Zapatismo isn't forced on anyone," he told me. "We are Zapatista because it is better for us." He and others did not resent their non-Zapatista and ex-Zapatista neighbors—many of whom use (and prefer) Zapatista schools, hospitals, and justice. If I had to say what freedom is according to the Zapatistas I met, it would be autonomy, in the sense of controlling one's own life, through food production, healthcare, justice, and education. It is not about forcing autonomy upon or closing it off to others.

When I asked my guardian if balancing this "mainstream" life with Zapatista autonomy was hard, he seemed to see no conflict. "Zapatismo isn't forced on anyone," he told me. "We are Zapatista because it is better for us." He and others did not resent their non-Zapatista and ex-Zapatista neighbors—many of whom use (and prefer) Zapatista schools, hospitals, and justice systems. This seemed at the core of Zapatista freedom: the creation of autonomous traditions in which all can partake; nothing forced upon others, but nothing entirely closed off either.

At departure, many guardians and students cried. The intense personal relationship we had lived for five days was over forever. No one knew their guardians' real names; we had not photographed their faces, nor would we see them again. At the Oventic closing ceremony, our Zapatista hosts stressed that no one could stay. They had invited us to see how they live freedom, not to join them. They cautioned us against trying to replicate what they do back home. "You must return to your own calendars and geographies," they told us, "where you can do what you will with what you have learned."

Indeed, in our New York "calendars and geographies," we carried on our learning, as my three "classmates" and I continued to share what we learned through public workshops. While the moment of the escuelita has come and gone, this was its ultimate goal—to have us remember it not by dwelling on those five days, but by exploring what it means in our own times and places.

Lucas Rénique-Poole is a photographer and student of environmental studies. He has been based out of both Brooklyn, NY, and Chiapas, Mexico.