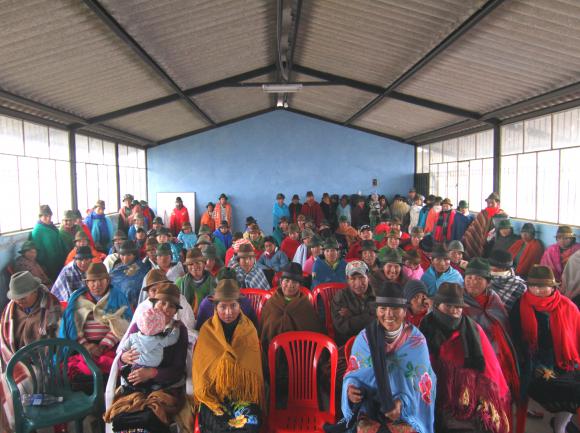 Gathering of farmers from Apahua and neighboring villages to discuss the distribution of recently donated seeds and farming equipment. 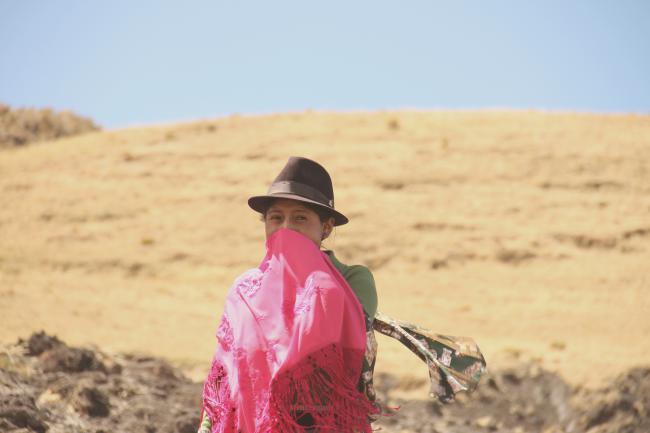 A member of Organización de Mujeres Pakarimuy de Pilalo in Apahua waits her turn as the group begins cultivating their farming plots. 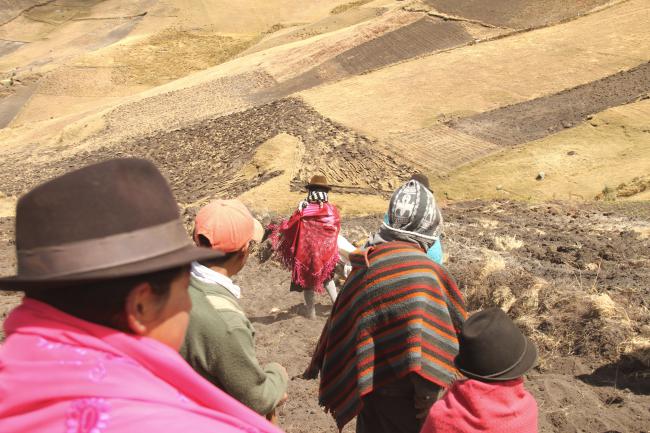 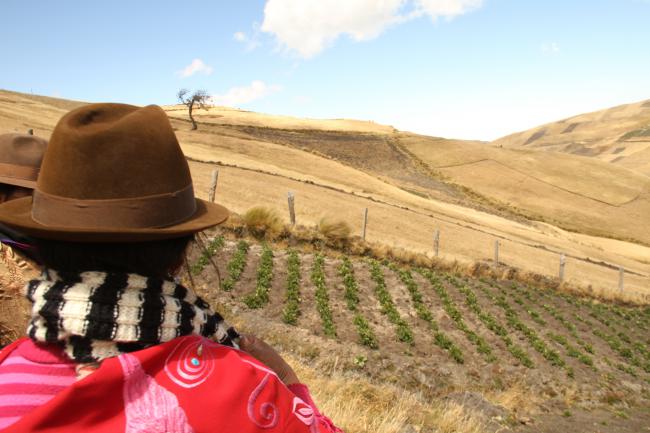 Rows of green vegetation amid the arid landscape stand out as a testament to the organization’s collective efforts. 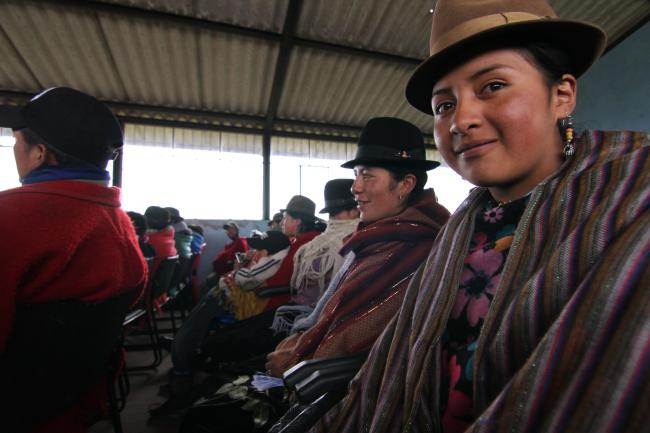 A member of Organización de Mujeres Pakarimuy de Pilalo at a monthly meeting in Apahua. 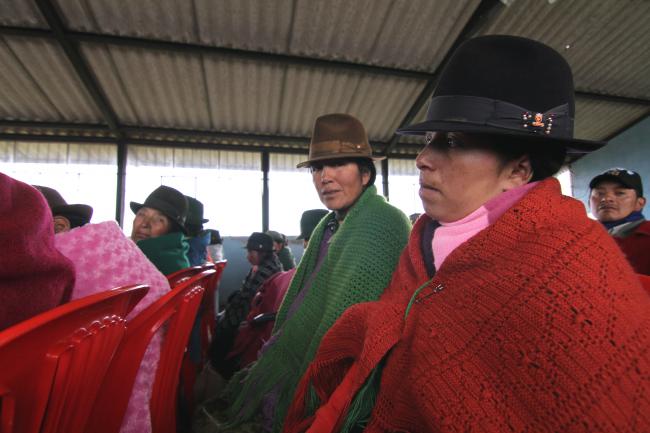 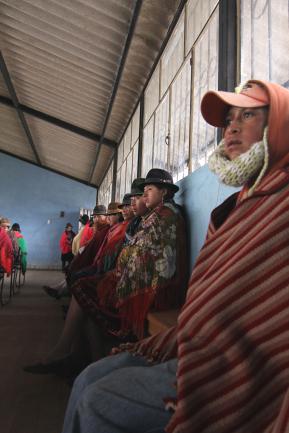 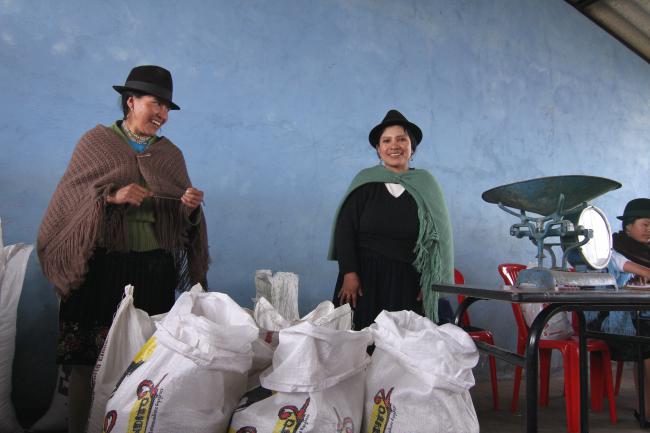 A meeting called by the Organización de Mujeres Pakarimuy de Pilalo in Apahua to discuss the distribution of a recent donation of seeds and farming equipment for members and their supporters. 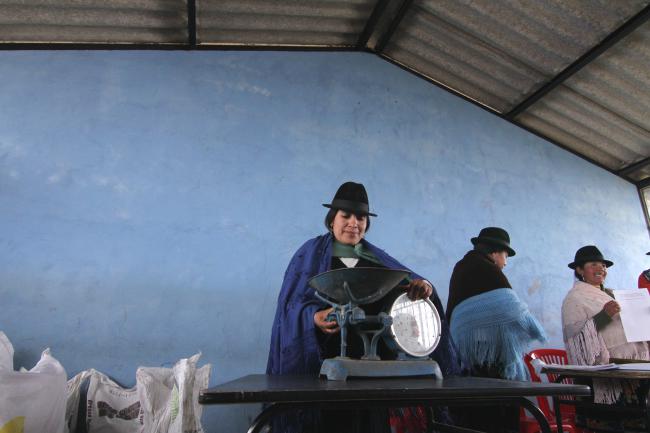 Leaders of Organización de Mujeres Pakarimuy de Pilalo in Apahua weigh each member’s portion of seeds, which were donated through a recent government program. 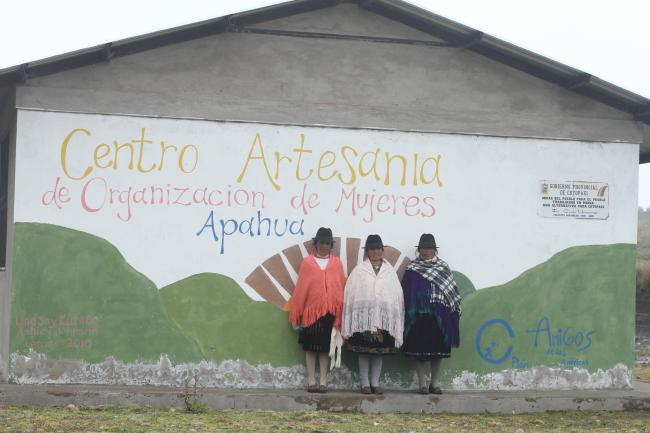 President of the Organización de Mujeres Pakarimuy de Pilalo in Apahua, Fabiola Quishpe, and her compañeras stand in front of the group’s organizing center.

One afternoon in Quito, Ecuador I discovered an article on the BBC's Latin America website about a small Andean village, home to a growing indigenous women's collective led by a 44-year-old woman named Maria Fabiola Quishpe Pilataxi.  Fabiola, divorced and without children, is the president of Organizaciόn de Mujeres Pakarimuy in the province of Cotopaxi, Ecuador.  Fiercely independent in a world still tied to traditional ideals of gender and family, Fabiola has dedicated her life to building an organization of women that both meets the practical challenges of life high in el páramo and struggles for women's rights. This organization commits its time and energy to revitalizing organic planting methods, providing tutoring for the village’s youth, and promoting empowerment for women, who have to deal with entrenched machismo in their homes.

After driving roughly four hours from Quito, I was lucky enough to meet Fabiola on a day when the organization held their monthly meeting. Mostly women and a few men listened attentively to Fabiola and her peers, with some taking notes and others translating from Kichwa to Spanish for us, the visitors. Among other issues on the meeting's agenda, the distribution of seeds they had procured from a government entity was left to the end. The seeds were weighed and distributed in a solemn and orderly fashion. We later learned that although Apahua was mostly a farm based community, nutrition values were being lost to Western products and habits, making this one of the points of discussion at following meetings.

Fabiola, a leader within a several-tiered hierarchy, clearly holds this position based on merit. Her stance and long fight against gender inequalities within her semi-feudal surroundings led us to touch upon her own personal story. A few years back Fabiola had the courage to leave a violent marriage that prevented her from going to college, a longed for dream of hers. Her ex-husband's opposition to Fabiola's educational pursuits simultaneously enraged her and filled her with the strength to take hold of her life. Months after meeting Fabiola a charla, or talk, was held with about 30 women of the organization. A multi-generational crowd filled the room and one by one, some hidden behind their shawls, shared their experiences as women in a society who face discrimination from inside and outside of their community boundaries. The act of speaking out says Fabiola, is something she encourages, as shyness is something that serves against them; this of course is something Fabiola has slowly conquered.

Speaking in front her compañeras is something Fabiola is accustomed to now. The meetings she leads along with a close-knit and courageous group of female leaders gathers about 200 women every month from the surrounding localities. They debate and make decisions on activities to take part in, apply for grants, and seek to collaborate with other organizations. She is an ardent supporter of organic crops and most importantly saving the little that remains of traditional farming methods. Fabiola has traveled nationally and internationally speaking and learning about the struggle to feed off the land as the growing pressures of the market have pushed people away from healthier and self-sustained farming.