Maya Achí survivors and their families celebrated the groundbreaking verdict that convicted five former paramilitaries of crimes against humanity during the country’s internal armed conflict. 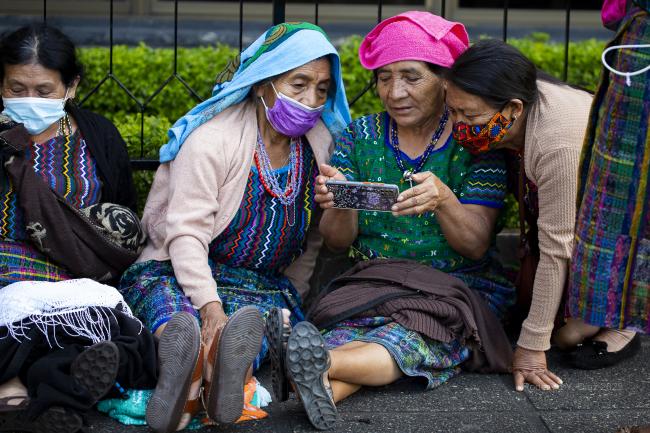 Achí women watch the transmission of the trial on a cell phone outside the court building. 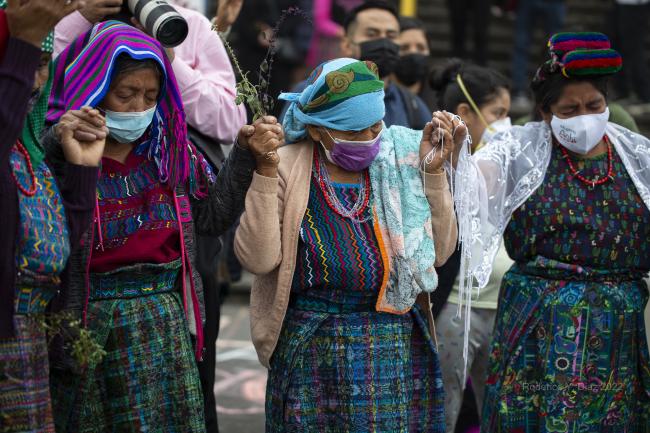 The group of Achí women who participated as witnesses in the trial, hold hands as part of a ceremony to commemorate the court sentencing. 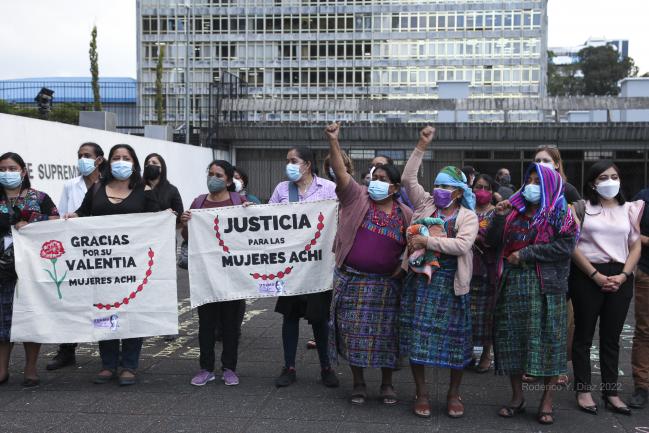 Achí women join a group of supporters and social justice organizations to celebrate the verdict. 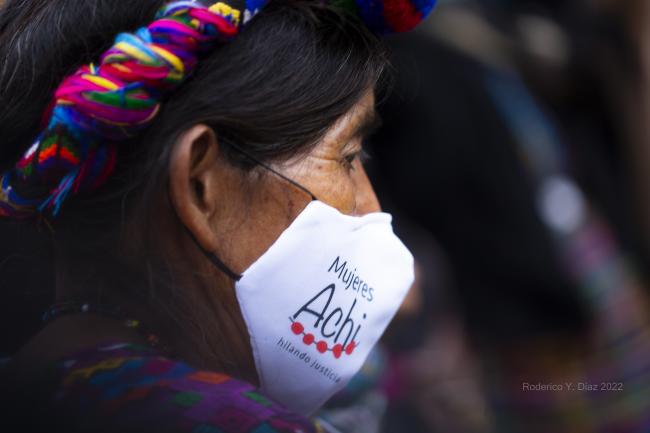 One of the Maya Achí women wears a mask with the message "Achi women weaving justice." 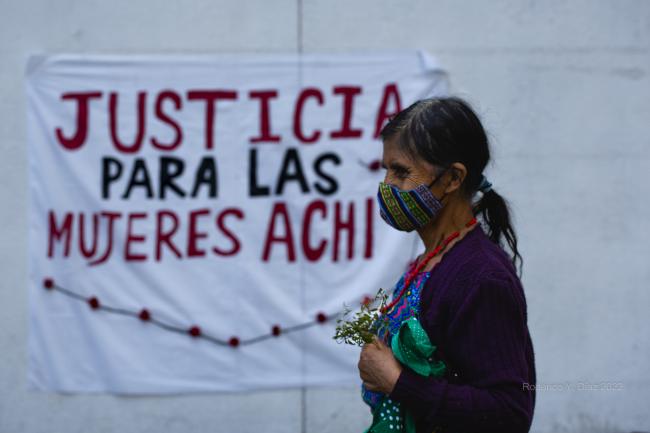 An elderly Achí woman walks in front of a banner in support of women survivors of sexual violence. The banner reads "Justice for Achí women.” 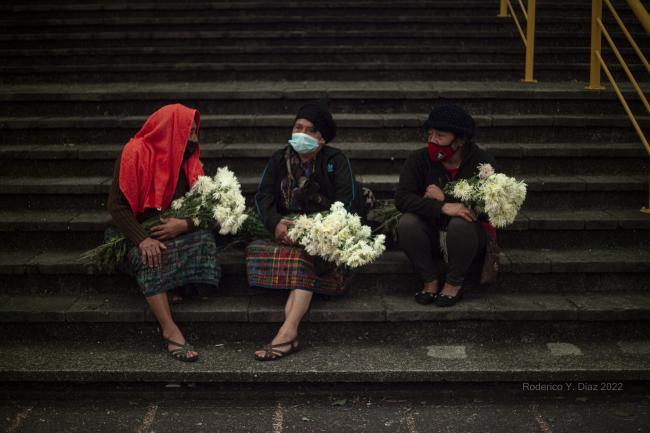 Margarita Alvarado Enriquez (center) who presented her testimony during the trial of the Achí women's case, converses with other women on the steps of the court building after the verdict. 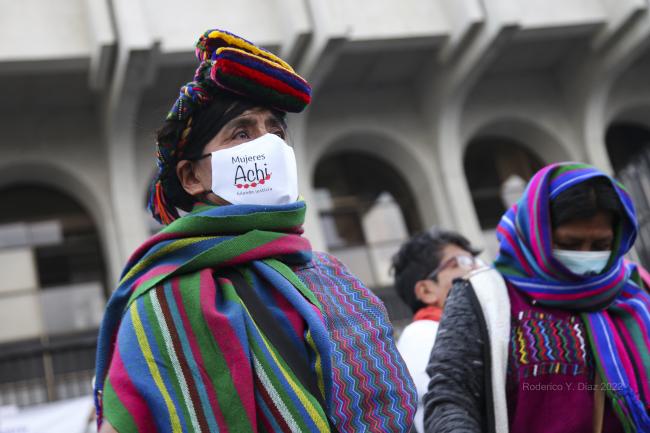 Máxima Emiliana García, participates in the celebration of the verdict along with other survivors of sexual violence in front of the court building in Guatemala City. 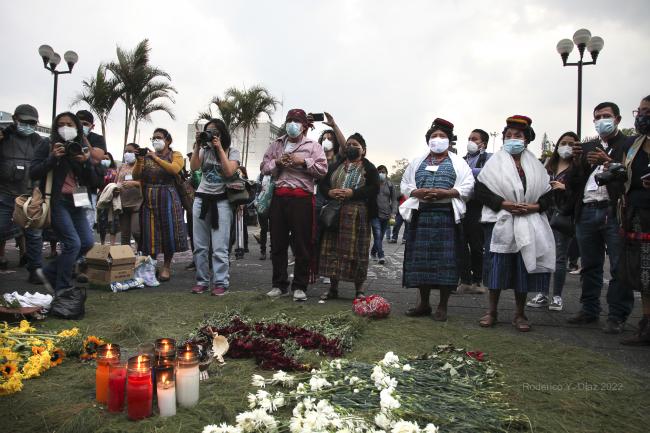 Achí women celebrate the verdict around the Mayan altar created in front of the entrance of the Supreme Court Building. 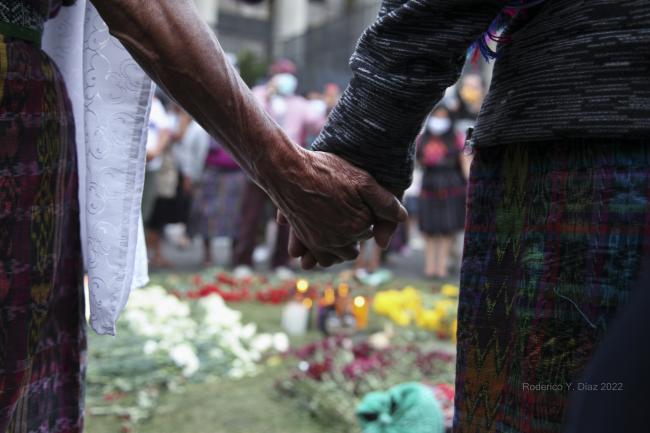 Two women hold hands, circled around a Mayan altar placed in the Human Rights Plaza in front of the Supreme Court building in Guatemala City to commemorate the day of the verdict. 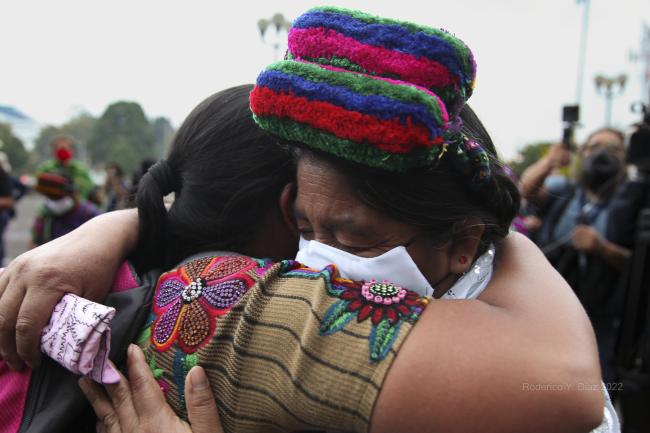 Andrea González Coj, an Achí woman and psychosocial care promoter, embraces Pedrina López de Paz, who gave testimony during the public debate that concluded in the sentencing of 5 former paramilitary soldiers to 30 years in prison.

After over a decade of court battles spearheaded by 36 Maya Achí survivors, a special tribunal convicted five former paramilitary soldiers of crimes against humanity on January 24. Each of the convicted were sentenced to 30 years in prison for acts of sexual violence committed in the early 1980s during the internal armed conflict in Guatemala (1960-1996).

Judge Sical of High Risk Court A read the verdict to a small crowd gathered in the courtroom. Outside the courthouse, hundreds more listened to a livestream of the proceedings set up by Verdad y Justicia, a civil society organization that accompanies historic human rights cases in Guatemala.

Outside the courthouse, hundreds of supporters celebrated the verdict and the survivors addressed the crowd. "We are happy with this sentence,” one of the women said.“We are here because it is our right and it is an obligation of the [Guatemalan] state. They owe us this, because not only did they rape us, they also killed our family members and burned our crops, they killed the essence of our crops.”

Roderico Y. Diaz is an Indigenous Maya Kaqchikel independent photojournalist and documentary videographer based between Guatemala and the United States. His work focuses on the struggle for justice after the genocide in Guatemala, Indigenous rights, the legacy of colonialism and the lives of migrants living in the United States. His perspective is informed by his own migration experience and as a survivor of the genocide in Guatemala. His work has been exhibited in galleries and universities in Guatemala and the United States, and his documentaries have participated in national and international festivals. Diaz is the co-founder of Iximché Media. To learn more: www.rodediaz.com and www.iximchemedia.com