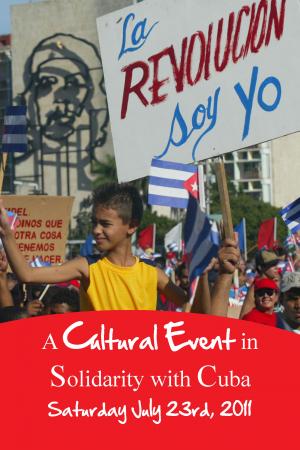 On Saturday, July 23, the July 26 Coalition will host an anniversary celebration in New York City of the Fidel Castro-led assault on the Moncada Barracks in Cuba. On July 26, 1953, Castro and other Cuban rebels launched the popular movement that would topple the dictatorship of Fulgencio Batista in 1959. Earlier this week, Ike Nahem, one of the coordinators of the coalition, discussed with NACLA the significance of the anniversary, and its relevance to American activists in the United States.

What is the significance of the anniversary of the attack on the Moncada Barracks?

The anniversary that will be celebrated this Saturday, on July 23, is an annual event now that has been taking place since 2003, and it commemorates the July 26, 1953 attack on the Moncada Barracks that became the spark for the revolutionary struggle that defeated and overthrew the U.S.-backed Batista government in 1959. It is a national holiday in Cuba, and supporters of the Revolution celebrate it in the United States. The July 26 Coalition brings together a lot of people every year, in spite of their political differences, to show their solidarity for Cuba, and their opposition to current U.S. policy.

What can activists in the United States learn from the July 26 anniversary?

Cuban revolutionaries were fighting against a military dictatorship that had destroyed the Cuban Constitution. There was no political space for a legal struggle because democratic rights had been abolished in Cuba by the Batista regime, which was backed by the United States, so they launched an armed attack. That would not be tactically relevant to activists in the United States. But leaving that aside, the fact that a group of young people—students and workers—came together and went to action against a regime is very inspiring. The most important example of activism shown by Cuban revolutionaries is the way they maintain that revolutionary perspective and solidarity with global causes in spite of the hostility of the U.S. government.

What connection can you make for Americans between Civil Rights and the Cuban Revolution?

The Cuban Revolution was a gigantic blow against racism and other injustices inside Cuba, and it had a big impact in the United States. This is part of the history that has not been publicized in the mainstream media. In fact, when Fidel Castro came to the United Nations in 1960, and stayed at the Theresa Hotel in Harlem, he made statements in solidarity with the Black struggle in the United States, and most importantly he explained what the Cuban revolution did, which smashed the Jim Crow system that existed in Cuba. He demonstrated his support later for African independence and liberation, as well as many activists like Malcolm X—who was a strong supporter of the Cuban revolution, Robert F. Williams, Leroy Jones, and many others. Many of the spokespeople against the beginning of U.S. hostility and aggression against Cuba in the early 1960s were Black activists. There has been an intimate connection between the Cuban Revolution and the struggle for Black rights since the beginning. 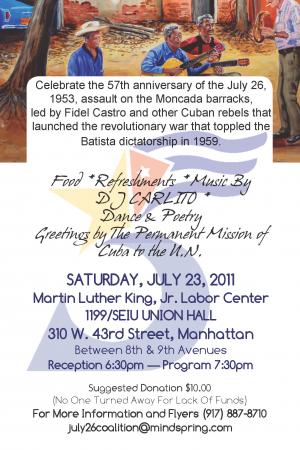 (Credit: July 26 Coalition)What do you think it is like in the United States today for supporters of the Cuban Revolution?

There has always been a layer of people in the United States who were sympathetic and supported the Cuban Revolution despite the huge demonization and propaganda against Cuba that dominated Washington and the media. In recent years, both in the overall population, and particularly amongst Cuban-Americans, the support for the end of U.S. sanctions, the freedom for U.S. citizens to travel to Cuba without going through government restrictions has grown tremendously. We have found through our own experiences that the overwhelming majority of working people have no hostility towards Cuba; especially among my black co-workers, who are largely sympathetic for the role that Cuba played in helping defeat apartheid in South Africa. There is a clear contradiction now between the sentiment of the U.S. population on this question, and the overwhelming majority of politicians—both Republicans and Democrats—who support a U.S. policy that is aimed at destroying the Cuban Revolution and its government.

The next issue of the NACLA Report on the Americas is entitled "Cuba: Salvaging a Revolution." Subscribe now and receive the Cuban issue.