Zelaya's Return: Neither Reconciliation nor Democracy in Honduras

Over the past few weeks U.S. Secretary of State Hillary Clinton and latter-day media "experts" have hailed Manuel Zelaya's return to Honduras and the pending reintegration of the country into the OAS as a restoration of democracy. Here in Honduras, it is clear that such claims could not be further from the truth. Honduras today is no closer to reconciliation than it was in the months following the June 28, 2009 military coup. 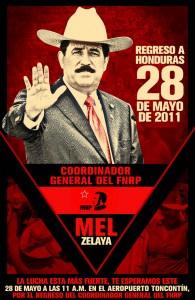 Credit: FNRPAs Dana Frank points out in The Progressive on May 27, the Cartagena Accords ensure the reinstatement of Honduras into the OAS in return for only one "concession" that is not already ostensibly guaranteed: that the trumped-up charges, leveled against Zelaya by the same court that legitimated his unconstitutional expulsion from the country, be dropped. That this should be sufficient for Honduras's return is perplexing, given that the country was expelled under Article 21 of the OAS Democratic Charter, which reads in part:

When the special session of the General Assembly determines that there has been an unconstitutional interruption of the democratic order of a member state, and that diplomatic initiatives have failed, the special session shall take the decision to suspend said member state from the exercise of its right to participate in the OAS by an affirmative vote of two thirds of the member states in accordance with the Charter of the OAS.

Today, the same businessmen, politicians, and military officials who funded, engineered, and carried out the coup are in power, having been guaranteed impunity for their crimes by a coup-supporting president who came to power through an illegal, fraudulent election that was legitimated by the U.S. government. Human rights abuses committed by police and military forces, rather than decreasing with the Lobo presidency, have surged in recent months to levels at or above those just after the coup.

The current Honduran government, which markets itself as one of "reconciliation"—a concept that historically means bringing those responsible for crimes against humanity to justice—has shown no interest in reconciling with anyone who disagrees with its policies of displacement, privatization of public services, and the auctioning of the country to the highest bidder. Diverse figures such as Carlos Slim (the wealthiest man in the world), former Colombian President Álvaro Uribe, and former State Department official Craig Kelly have lauded the Lobo government’s eagerness to divest itself of Honduran resources at the Honduras is Open For Business conference earlier this month. Meanwhile, criminalization and the violent repression of citizens exercising their right to protest such policies has intensified. The Anti-Terrorist Law, passed last November by "Zero Tolerance" strongman and Minister of Security Oscar Álvarez, expands the legal revocation of civil liberties for opponents of government policies, building upon the 2003 Anti-Gang Law passed by Lobo (as President of the National Congress) and also on the 1980s Anti-Terrorist Law, when Álvarez's uncle Gustavo Álvarez Martínez led the infamous CIA-trained Battalion 3-16 death squad in disappearing, torturing, and killing opponents of the "democratic" regime then in power.

Just this week in Tegucigalpa, police ambushed a high school, shooting tear gas canisters and live bullets at students as young as 16 who were protesting the Lobo government's suspension of their math teacher for speaking out against the privatization of education. One student was sent to the hospital and 21 others were arrested—along with the mothers of two students, who had come to beg for mercy—for threatening the public order.

The State Department's response to the excessive violence of the Honduran police and military in recent months has been far from satisfactory. The U.S. Human Rights and Labor Attaché in Tegucigalpa, Jeremy D. Spector—instead of condemning the reprehensible acts (including murder) carried out by Lobo's security forces—has labeled protestors "thugs,” and blamed the violence on protesting teachers, students, parents, and other Hondurans resisting repressive state policy. There are opposing voices both within and outside of the U.S. government. At least 86 members of Congress have signed a "Dear Colleague" letter to Hillary Clinton calling for a halt in U.S. police and military aid to Honduras until there is accountability for human rights abuses. Another recent letter, signed by 107 organizations, calls for the continued suspension of Honduras from the OAS, stating that "the regime of Porfirio Lobo should not be rewarded for continuing the repression and impunity." A May 16 letter from 20 Honduran and international NGOs to OAS ambassadors cautions against Honduras's return to the OAS before substantial progress has been made in addressing human rights violations and impunity.

Meanwhile, the U.S. military Southern Command (SOUTHCOM) has been rapidly expanding its occupation of the country, with the implicit approval of the Lobo administration. SOUTHCOM has installed two new military bases and recently announced a plan to construct permanent barracks in contravention of Honduran law, which recognizes the U.S. military as having only a "temporary" presence in the country. On Thursday, a letter written by the Fellowship of Reconciliation and signed by over 70 religious leaders, organizations, and academics, was sent to “contractors and bidders on contracts for U.S. construction on military bases in Honduras,” urging them to withdraw from such contracts or from bidding on them.

Perhaps most importantly, here in Honduras, nearly all sectors of the massive resistance movement, while celebrating the return of Zelaya, have publicly and outspokenly opposed the re-entry of the Lobo government (which the movement itself does not recognize) into the OAS. Some have gone even further, criticizing the bargaining away of human rights and the anti-democratic procedure of the Cartagena Accords as a threat to democratic processes. A May 23 statement titled "Human Rights Are Not Subject to Political Negotiation"—issued by the Committee of Relatives of the Detained and Disappeared in Honduras (COFADEH), one of the most respected human rights organizations in the country and a member of the anti-coup Human Rights Platform—rejects the notion of "reconciliation" under current conditions, which it describes as follows:

Nearby, five teachers sustain an indefinite hunger strike due to violations of their social and economic rights; hundreds of campesino families in the zone of Aguán are surrounded by legal and clandestine forces acting against their lives and lands; and an average of 16 violent deaths occur each day throughout the country, in total impunity.

On May 26 the influential collective Artists in Resistance issued an open letter to former President Zelaya, in which they welcomed him back, but announced their refusal to perform in Saturday's festivities, stating: "Our song and our voice is political and not simply backup for a cathartic euphoria over a success that we have yet to achieve." They also presented a brief assessment of the current state of affairs:

We will be there to receive you, compañero Manuel Zelaya, and we will not forget that the Lobo regime is murderous, that it continues murdering the campesinos of Aguán and Zacate Grande; that this very week it has ordered police to stomp on the necks of the students of Luis Bográn, that it ignores the martyrs and desperate hunger strike of the teachers, that it permits the targeted assassinations of artists like Renán Fajardo and Juan Ángel Sorto, that it carelessly ignores the deaths of poets of universal standing like Roberto Sosa and Amanda Castro, that it continues ordering protection for the murderous businessmen of the coup d'état and that it attacks and persecutes its people and has sold off our territory piece by piece, with the help of a police force and army converted by the empire into occupation forces within our country.

In a statement on May 27, the Civic Council of Popular and Indigenous Organizations of Honduras (COPINH), the largest and most powerful indigenous organization in Honduras, similarly welcomed Zelaya to the country while condemning the Lobo administration. It reserved its strongest words for the OAS:

[I]f you think you will wipe the board clean and start over, you are mistaken; you are mistaken in your cold economic calculations, in your political pragmatism, in your urgent desire to serve imperialism in its project of rearranging the continent; you are mistaken in your hypocrisy of recognizing a murderous regime that is the inheritor of a coup d'état and that has not complied with the conditions for return imposed by the OAS itself, for which it was expelled in the first place.

So far, only Ecuador has declared its firm opposition to Honduras's reentry into the OAS. President Rafael Correa, himself nearly overthrown in a coup attempt last year, said on May 26, "There is one requirement; anything else is impunity. What is the requirement? That those responsible for the coup be punished."

Zelaya will walk a treacherous line as he steps off the plane on Saturday. Many Hondurans, for whom he has become a hero of saint-like proportions, will be surprised to discover that his first order of business is a luncheon with Lobo and OAS Secretary General José Miguel Insulza. But whether or not Zelaya retains his enormous popularity in the months to come, one thing is certain: without justice, there will be neither reconciliation nor democracy in Honduras.

Adrienne Pine is Assistant Professor of Anthropology at American University, and the author of Working Hard, Drinking Hard: On Violence and Survival in Honduras (University of California Press, 2008). More of her work can be found at quotha.net.