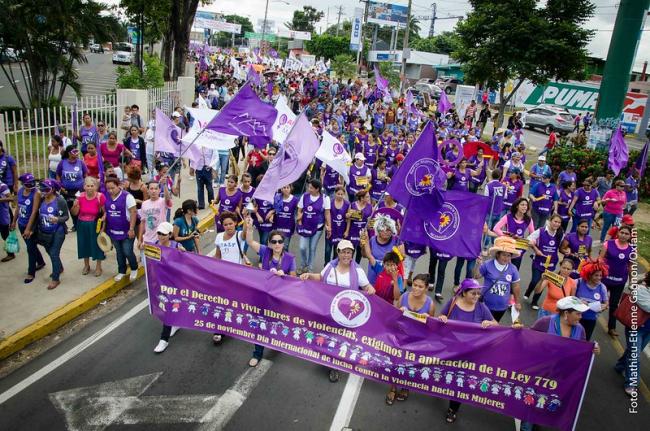 Dozens of feminist groups in Nicaragua that provide crucial support to vulnerable women have been labelled “foreign agents” and outlawed by the government, meaning they can no longer operate.

Reproductive healthcare services, shelters for survivors of gender violence, and loans and training for peasant women—to cite just a few activities run by feminist groups—are vanishing as a result of the government ban, say activists.

“It’s a delusion of absolute control,” says María Teresa Blandón, a sociologist and prominent feminist who coordinates one of the affected groups, La Corriente. The authorities “know there is critical thinking, a defense for human rights and a democratic vocation in feminist organizations," she said.

Last month, the Nicaraguan National Assembly—which is controlled by the ruling party, the Sandinista National Liberation Front—terminated the legal status of 50 civil society organizations, including La Corriente and six other feminist groups.

President Daniel Ortega’s regime has outlawed 267 NGOs since 2018, including 40 women’s groups serving vulnerable groups, according to the Mesoamerican Women Human Rights Defenders Initiative. Many of them were affected by a 2020 law that forced any group receiving funds from international donors to register as a “foreign agent.”

La Corriente refused to register, arguing it was against their right of association and the Nicaraguan constitution.

“It is a policy of sweeping away any form of organization that is not under state control. Even though we don't have a partisan perspective, they have declared us a mortal political enemy,” Blandón said.

Since its founding in 1994, La Corriente has provided inclusive education for women and LGBTQ youth, and managed development projects. It is one of the leading voices denouncing violence against women and LGBTQI+ people.

Blandón said: “Women’s groups, like other civil society organizations, do work that the state does not do, not because it is not its responsibility, but because it has not been part of its priorities.”

With their legal status revoked, La Corriente and other groups were no longer eligible for international funding, so had to shut down operations.

The prospects for women and the LGBTQI+ community are bleak without these groups working on their behalf. There is no legal protection for LGBTQI+ people in Nicaragua, and sexism and homophobia are widespread. In the first four months of this year, the country has reported 22 femicides (there were 71 in 2021).

In 2018, there were 13 shelters for women and children survivors of gender-based violence. Today, only three remain open—and they have to operate clandestinely, to avoid government persecution, a source from the Nicaragua Feminist Articulation told openDemocracy.

One of the first feminist groups to close was one of the oldest, the Matagalpa Women’s Collective (Colectivo de Mujeres Matagalpa, CMM), set up in 1984 by leftist women activists. It gained legal status as an NGO in 1990, to work with women in impoverished communities in Matagalpa department, a countryside area ravaged by the U.S.-funded civil war in the 1980s.

Nicaragua is one of the lowest spenders on public health in Latin America, according to the Organisation for Economic Co-operation and Development (OECD). Only Guyana, Honduras, Venezuela, and Haiti spend less. For decades, CMM provided more than 10,000 women per year with reproductive and mental health services, legal support, and protection from violence.

"We have always been a critical voice against the state, demanding public policies for women to enjoy their rights in areas where the state does nothing," said a member of the group who asked not to be named for fear of reprisals.

CMM’s legal status was revoked last August, but state-led harassment started in April 2018, when civil unrest erupted in the country and the group became involved in anti-government protests that were crushed by the authorities. At least 325 people were killed, according to the Inter-American Commission on Human Rights, and Ortega’s regime was accused of committing crimes against humanity.

Three foreign members of CMM have been deported, and several Nicaraguan members forced into exile. CMM activists who still live in the country face harassment and persecution.

“We have been called everything, from terrorists to lesbians to being financed by ‘Yankee invaders’ to money launderers,” said the anonymous activist. Since Ortega took power in 2006, “Matagalpa’s people experienced brutal repression, peasants were murdered, and we feminists needed to raise our voices,” she added.

She fears that closing CMM’s office and halting its projects will damage women’s health and allow gender violence to flourish: “The government thinks it is harming those of us who work in these organizations, but it is harming the women our projects have benefited for years.”

The Rural Women’s Organization (Coordinadora de Mujeres Rurales, CMR) was one of the few formally organized spaces for rural women in Nicaragua. It provided loans and agroecology training to peasant women, while also fighting for more equitable tenure of farmland.

With resources provided by international aid organizations including Oxfam—which was itself banned from working in Nicaragua, in 2021—CMR distributed loans to women to purchase plots of land or seeds. It also campaigned for a law to create a fund to provide lands to rural women (only 20 percent of landowners are women, according to the last agricultural census). The law was passed in 2007 but never implemented by the government

CMR’s legal status was revoked in May, meaning it could no longer support more than 600 women in the northeast of Nicaragua.

"With our projects, women can access credit through cooperatives. Unfortunately, banks do not lend to women farmers. Sadly, we will be unable to help them that way anymore," said María Teresa Fernández, president of CMR.

Feminists as "Enemies" of the Government

Nicaraguan women’s rights groups have been at odds with Daniel Ortega since 1998, when his stepdaughter Zoilamérica accused him of sexual abuse, and feminists stood with the victim and demanded justice. Ortega and his wife Rosario Murillo began to attack feminists, branding them murderers financed by the “Yankee empire.”

Ortega, a former leftist guerrilla commander during the Sandinista Revolution of 1979, was president in the 1980s and then re-elected in 2006. As he became an increasingly authoritarian ruler, he managed to sustain a left-wing rhetoric while forging a close alliance with conservatives, supporting, for example, Nicaragua’s total ban on abortion in 2006.

Blandón from La Corriente, who was a supporter of the Sandinista Revolution, highlights the widespread “macho” culture of Ortega and other Sandinista leaders who are eager to retain their privileges.

“The marriage of feminism and the Left was bad because we [women] were very faithful and the revolution leaders did not want to hear our proposals,” she said. “The breakup was inevitable, and it was only the beginning of a conflict that has got worse and worse.”

It’s not only feminist groups that are affected. Social and rights activism is diminishing in general in Nicaragua, as many other groups also shut down their activities out of fear, according to a recent local report.

With no projects to run nor options to raise funds, feminist activists are seeking ways to sustain their work and resistance. CMM will continue supporting community efforts to organize, and denouncing "human rights violations and authoritarian rule,” said a member.

“Women tell us ‘they can't take away our knowledge,’” Fernández from CMR said.

As for Blandón, she says La Corriente will survive as a group, because “feminism does not depend on funds or a physical space.” “Our work will continue because they cannot take away our right to think and build critical consciousness.”

Dánae Vílchez is a Nicaraguan journalist based in Guatemala. She became openDemocracy's Mesoamerica correspondent in March 2022, after a stint as a fellow in 2021. She is also Central America correspondent with the Committee to Protect Journalists (CPJ) and has an Erasmus Mundus master’s degree in journalism, media and globalization, with a specialization in politics. She was previously a fellow with the International Center for Journalists (ICFJ) and the International Women’s Media Foundation (IWMF). Her work has appeared in The Washington Post, Pikara Magazine, eldiario.es, Confidencial and AJ+, among others.