Close to 200,000 Nicaraguans have sought refugee status in Costa Rica since 2018, testing the nation’s capacity to receive them. 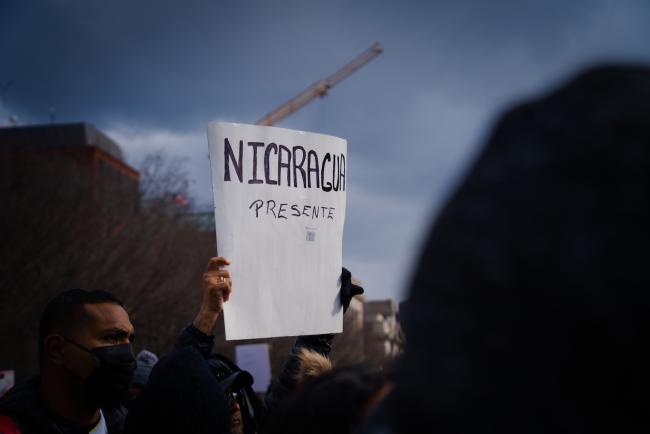 Maritza Tercero counts herself lucky; she was out when paramilitaries came looking for her. Days earlier, she had informed the Sandinista mayor of her town, Wiwili, that she no longer wished to work with their office. So in her eyes, the masked men that ransacked her home came for retaliation. She left her three children, ages 22, 15, and 12, with her mother and left for Costa Rica the next day.

Over the six years prior to Nicaragua’s sociopolitical unrest that began in 2018, neighboring Costa Rica received 16,519 total requests for refugee status. Since then, that number has increased by more than 200,000, according to data from Costa Rica’s General Directorate of Migration and Immigration.

“This is a significant and important challenge for Costa Rica,” said Allen Rodriguez, Assistant Director for the agency. Rodriguez notes that wait times for those that have submitted refugee petitions have stretched to between three and four years on average.

Rodriguez expects to end 2022 with around 250,000 pending refugee petitions. With a population of just over five million, that number represents close to 5 percent of Costa Rica’s total population. Of the total applicants, 92 percent come from Nicaragua. Though record numbers of Nicaraguans are seeking asylum at the U.S.-Mexico border, the spike in refugees that seek protection south instead of north highlights a historical exodus from what has long been considered one of Central America’s safest nations.

“Having a very solid democracy, it has made our country a destination for so many people who find themselves looking for a new start,” said Rodriguez. He also highlighted Costa Rica as a top destination for Nicaraguans historically, noting that physical proximity, cultural similarities, and networks of family or friends that made the journey before are strong pull factors for potential migrants.

“For decades there’s been a substantial flow of Nicaraguans coming to Costa Rica to work, really ever since the civil war in Nicaragua in the 80s,” explains Abelardo Morales Gamboa, professor of sociology at Costa Rica's National University.

Though the influx of refugee petitions is creating headlines across the country, Morales Gamboa says that a regular flow of Nicaraguan migration has always fluctuated with the tides of Costa Rica’s economy. He notes that Nicaragua saw a “massive return” of refugees after the election of Violeta Barrios over Daniel Ortega in 1990, but that the country’s economic contraction in the following years sent many back to Costa Rica to work in the expanding agriculture and tourism sectors.

Morales Gamboa does concede that this wave of Nicaraguan migration is different. As the Ortega regime has increased its repression of the opposition and forced the closure of thousands of nonprofit organizations that provide essential community services, more and more individuals find themselves in the government’s crosshairs. The sociopolitical crisis—compounded by the pandemic—has sent prices soaring as wages stagnate, making many feel they have no choice but to leave. 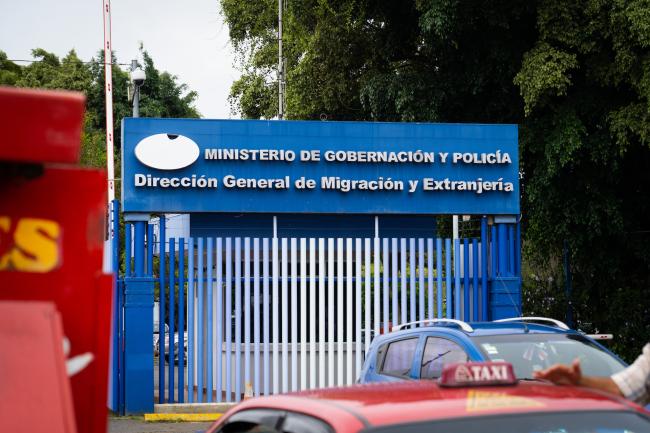 “Our Economic Stability Rests in the Hands of Nicaraguan Workers”

Some of the Nicaraguan migrants waiting on the street outside the UN High Council for Refugees’ (UNHCR) makeshift receiving center in San Jose had been forced there as a result of political persecution at the hands of the Ortega regime. Others were driven by economic necessity and the lack of stable work at home. Misael Castillo, a Nicaraguan who recently made the journey south, noted some of the common pull factors that brought him to Costa Rica.

“This country is a beautiful one—there’s peace, there isn’t much abuse,” said Castillo, standing alongside his wife and six-year-old son. “And I wouldn’t like going to the United States because crossing the border is just so dangerous…for the good of my son and my wife, Costa Rica was the better option.”

Castillo and his family presented themselves to immigration officials at Costa Rica’s busiest terrestrial border crossing in the town of Peñas Blancas in July. He formally submitted his refugee petition at the end of September—the submission granted him an identification card authorizing him to work in the country.

Unlike in the United States, where asylum applicants must wait six months to apply for work authorization, refugee petitioners in Costa Rica could, until recently, receive a work permit immediately upon submission of their request. Castillo had been unemployed for some time, struggling to string multiple days of work together in the coffee fields of Nicaragua’s northern mountains. The idea of a stable job excited him.

But not all migrants have an easy time making ends meet. Several Nicaraguans waiting outside the UNHCR processing center expressed dismay at the thin employment options they've faced since arriving in Costa Rica. Martitza Tercero, who fled Nicaragua in January, was one of them.

“Things have been bad for me here because I haven’t found work,” said Tercero as she waited for a friend outside the processing center. “Sometimes I might get a couple hours on an odd job, make like $20 and send it back to my kids in Nicaragua—that’s just how life goes here.”

Tercero's sister also fled Nicaragua in January, instead choosing to reunite with her partner in the United States. who helped her pay a coyote for the journey. Tercero says that her sister has already found a stable job with a boss that treats her well.

“If I could go to the U.S., I’d go because that’s where my sister is,” said Tercero. “If I had found a way to do it, I’d have already gone, but I haven’t found that chance.”

Costa Rica’s 18 percent unemployment rate in 2021 was the highest in Central America and the highest in the country’s history, according to data from the World Bank.

Morales Gamboa attributes this staggering figure to economic contraction caused by the pandemic. He notes that the nation’s unemployment rate has fallen to 11 percent this year as tourists return to Costa Rican beaches and other economic activities have gradually recharged.

What hasn’t changed, according to Morales Gamboa, is a demand for cheap labor. Though some critical of the influx of migrants disagree, Morales Gamboa does not see a link between the increase in refugees and the high unemployment rate—he says that Nicaraguan migrants mostly take jobs that Costa Ricans themselves pass up. “There is a structural dependence in the Costa Rican economy and society on cheap Nicaraguan labor,” he said.

Avi Chomsky, professor of History at Salem State University and author of multiple books about migration in the Americas, attributes this dependence as a primary reason why rampant discrimination against Nicaraguans exists in a country that many outsiders see as a peaceful paradise. “Costa Ricans are just as racist against Nicaraguans as people in the U.S. are against, say, Mexicans—you import poor workers, and then you discriminate, because it justifies their exclusion and exploitation,” she said.

Though some Costa Ricans dismiss discrimination against Nicaraguans as a problem of the past, Gamboa notes that a stigma persists, associating Nicaraguans with insecurity and criminality. He considers the stigma ironic given that a disproportionately high number of Nicaraguans are employed as security guards for neighborhoods and businesses. 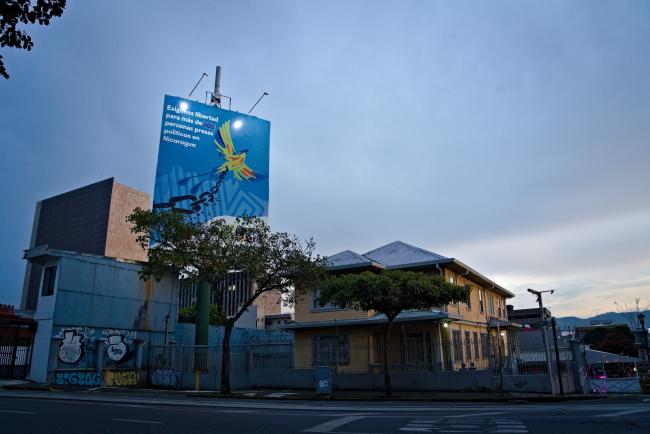 Questions remain regarding how well Costa Rica may be able to weave migrants into its society and economy. In August, Reuters reported on the nation’s bold plan to regularize the immigration status of the nearly 200,000 undocumented persons—the majority Nicaraguans—living there. Upon request for comment, Allen Rodriguez from Costa Rica’s immigration agency seemed to equivocate on this information.

“That piece of news wasn’t exactly correct,” said Rodriguez, noting that the country will have to spend a lot of resources getting through the high numbers of both asylum and refugee petitions, and that many who have applied may not actually qualify. “At this time there is no formal proposal and we are not engaged in any process regarding regularization of status.”

At the end of November, President Rodrigo Chaves announced two new measures hoping to deter what he calls “economic migrants” who seek to take advantage of Costa Rica’s “generosity.” One prohibits all refugee applicants from leaving the country for any reason lest their application be voided. The other implements a delay in issuing work permits, and requires those seeking to renew their work permits to first register with Costa Rica’s social security office.

Morales Gamboa sees these changes as reflective of a growing disapproval across Costa Rica of the surge in migration. “Either directly or indirectly, the president is using these anti-immigrant talking points and sentiment, just like in Europe or the U.S., to gain support from certain internal anti-immigrant groups,” he said. At the same time, Rodriguez says that President Chaves has called on the international community for aid in dealing with the crisis.

Outside the UNHCR’s processing center in San Jose, many migrants expressed dismay at appointments being canceled or confusion about how to schedule an appointment in the first place. People with computers sat in the open trunks of parked cars and gestured people over to talk to them—for a small fee, they would help schedule the appointment.

One of these men (who declined to share his name) explained that refugee seekers need only call a hotline at 1311 to make an appointment to be seen, but that most migrants lack this knowledge or the saldo—cell phone minutes—needed to sit through the necessary wait time.

Some migrants fall victim to scams, paying someone who promises to book an appointment, only to show up at the UNHCR processing center to find that they aren’t on the list.

Beyond the lack of reliable information, many migrants expressed confusion or misinformation about the timeline for their petitions. Several thought that receiving work authorization—a right that comes with making a formal refugee petition—meant full approval of refugee status, a process that takes years.

One Nicaraguan mother and daughter, who had been living in Costa Rica for years and declined to give their names, came to their appointment in September to see if refugee status was even an option for them. They left unsure, but with work authorization and paperwork for their next appointment in hand at which time they would get a better answer—in September 2032.

Daniel Zawodny is an independent journalist who covers immigration and immigrant issues. He also holds full accreditation from the Department of Justice to represent immigrants before the U.S. Citizenship and Immigration Service and U.S. immigration courts.