As the pandemic devastates the country, presidential priorities include a train circuit, pipeline infrastructure, and a refinery. 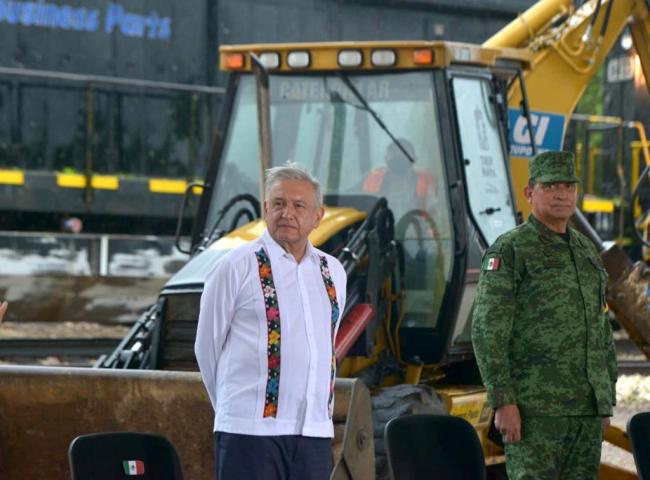 An effort to reshape southern Mexico is plowing ahead on the margins of a slow-burning pandemic that has claimed tens of thousands of lives nationwide. For detractors, a series of large projects slated for the region represent a grave threat to societies, territories, and ecosystems. For proponents, they are a golden opportunity for economic improvement during a global downturn. But all sides agree the projects imply a fundamental shift.

Interconnected infrastructure projects include a train circuit with planned cities through the Yucatan Peninsula, a massive new refinery in Tabasco, hydroelectric and gas pipeline infrastructure through a three-state region just south of Mexico City, a new international airport in the capital, and–running down the middle of it all–a railway and industrial corridor across Mexico’s narrow Isthmus of Tehuantepec.

These five projects, the Mayan Train, the Dos Bocas refinery, the Morelos Integral Project, the Santa Lucia airport, and the Trans-Isthmus Corridor, are the subject of domestic legal challenges as well as a complaint presented to the Inter-American Commission on Human Rights earlier this month.

“Taken together, these projects have a tremendous impact on the populations that inhabit the regions and on the environment,” notes Carlos González, a Nahua attorney with the Indigenous Governing Council, who specializes in land rights issues and who worked on the briefs.

González says that the projects align with U.S. priorities in the region to redefine borders, reorder territories, and control populations. Meanwhile, they benefit powerful financial interests. He calls the Trans-Isthmus Corridor “the hinge between the projects in the south–of the Mayan Train–and those in the central part of the country.”

The government’s plan for the Trans-Isthmus (or Inter-Oceanic) Corridor calls for linking the Pacific and Gulf Coasts across the Isthmus with a railway and highway, expanding ports on both ends, linking refineries by pipeline, and establishing 10 tax-favored industrial parks in between. The project aims to compete with the aging Panama Canal while adding a duty-free manufacturing component like the maquiladora free trade zone along the U.S.-Mexico border.

Mexico’s President Andrés Manuel López Obrador, also known as AMLO, touts the megaprojects as a means to create jobs, capitalize on strategic locations and resources, and close the economic gap between the industrialized north and the cash-poor south. Another aim, as outlined in his administration’s National Development Plan is, “the improvement of living conditions in the main areas that expel manual labor and that the regional development projects act as ‘curtains’ to capture the migratory flow heading north.”

Bettina Cruz, a Binnizá (Zapotec) academic and organizer in Juchitán, Oaxaca says the Inter-Oceanic Corridor will act as a de-facto border wall, which will include, “[a] four-track-wide railway that they’re trying to build in the Isthmus, along with a highway, that’s going to be patrolled by the police, the National Guard, the Navy, and the Armed Forces.”

The military plays a key role in the administration’s megaprojects. The armed forces are leading construction of the new international airport outside Mexico City, which will be located on a former air force base and will continue to be used for military aviation purposes in addition to civilian air traffic.

The Secretariat of National Defense is also building the final stretches of the “Mayan Train” through a particularly remote area. “The militarization of this last part is especially serious,” says Pedro Uc Be, a Mayan writer and outspoken opponent of the train circuit. “It comes off as a message sent to us from the presidency to inhibit any form of criticism or act of protest.” 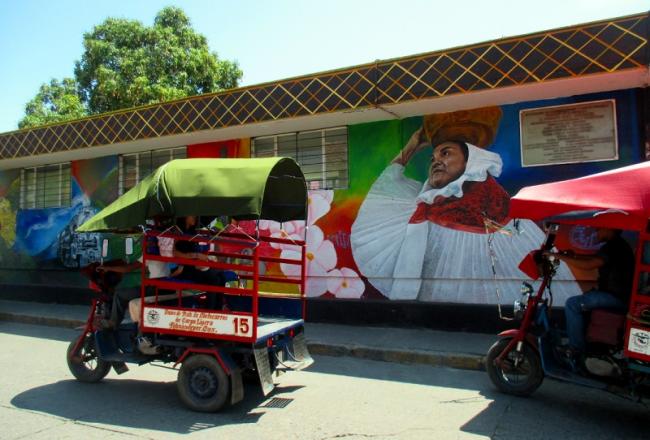 Just last month, President López Obrador announced he wants to hand the administration of the nation’s customs entries and ports over to the navy, which will militarize ports on both ends of the Trans-Isthmus Corridor. This intent to militarize civilian duties prompted the resignation of his Secretary of Communications and Transportation. The president’s stated rationale is that military management brings greater discipline and hinders corruption, a familiar refrain for any observer of the long-running drug wars.

The move will require a change to the constitution, which has been done before during the current administration. MORENA, the party López Obrador founded, holds a majority in both chambers of Congress and controls enough state legislatures to pass constitutional amendments. Changing the constitution to legally militarize civilian policing duties was how AMLO created the special police force known as the National Guard.

The fates of the megaprojects and the military have become even more entwined after two presidential decrees issued as Mexico was entering the thick of the pandemic. The first, published April 23 in the Official Gazette, slashed budgets by 75 percent for all government agencies and programs except for a few dozen, namely signature programs and legacy projects of the president. The controversial megaprojects were deemed national priorities and the budgets of the armed forces and National Guard were explicitly left off the chopping block.

Then on May 11 came another presidential decree to extend the participation of the armed forces in civilian policing duties, by collaboration with the National Guard, through March 2024.

“The two decrees have an end result of militarization and militarism, on the one hand,” says anthropologist Gilberto López y Rivas. “And on the other, a continuation of development, extractivist programs of past administrations that the current administration of ‘the Fourth Transformation’ has criticized.” López y Rivas defines militarism as an exaltation of the armed forces and the supposed benefits they bring to a country. López y Rivas, a survivor of the 1968 Tlatelolco massacre and former congressman who found civilian oversight of the military to be virtually impossible, is concerned about putting the military on a pedestal without scrutiny.

For many Indigenous communities in the paths of megaprojects, the administration is just slapping a new rhetorical coat of paint on proposals that have stalled in the past. The pitch for the Inter-Oceanic Corridor may ring a bell to anyone familiar with the Plan-Puebla-Panama (PPP) proposal of the Vicente Fox administration. Business magnate and political string-puller Alfonso Romo was the driving force behind the PPP within the Fox administration. He is now AMLO’s chief of staff.

“They can switch up the overseers, foremen, and supervisors, but the plantation owner remains the same,” remarked a communique from the Zapatista Army of National Liberation (EZLN) after AMLO’s landslide victory.

The president wants the prioritized megaprojects complete before the end of his term in office. He has traveled multiple times during the pandemic to ribbon cut and monitor progress on both the Mayan Train and the Trans-Isthmus Corridor. Ironically, it may be the pandemic that allows the controversial projects to roll ahead as local organizers take shelter in their homes to avoid a contagious respiratory disease the government is doing little to contain.

The pandemic has hit areas in the path of the megaprojects hard, but in ways that are not apparent in casual glances at the official heath data. In Oaxaca, the Union of Indigenous Communities of the Northern Zone of the Isthmus (UCIZONI)–an organization that opposes the corridor–has called on the federal government to set up a field hospital due to the intensity of the area’s outbreak and the distance required to reach the nearest large hospital. Three longtime organizers with the UCIZONI have died since the start of the pandemic. 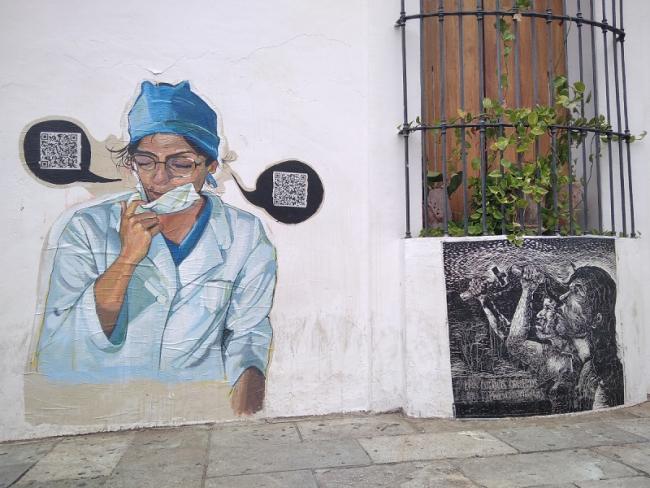 Testing restrictions and scarcity have led to a widely acknowledged case under count. Municipal authorities in the Isthmus region have turned to excess mortality (deaths above historic average levels) to measure the impact of the virus. In Juchitán, the region’s largest city, municipal burial records indicate fewer than 25 percent of suspected Covid-19 deaths were confirmed by a lab test. The city is home to the region’s largest hospital, which was temporarily shut down in July due to a major outbreak among staff.

The administration claims local communities support the megaprojects, pointing to a series of “consultations” carried out in 2019. Organizers Bettina Cruz and Pedro Uc Be and land rights attorney Carlos González argue the consultations did not meet the standards of prior, free, and informed consent obtained in a manner consistent with cultural norms of Indigenous voting in assemblies.

“What the federal government has done is simply to impose the president’s point of view through a media campaign,” says human rights attorney Victor Caballero of Colectivo Aequus. “They announce the consultations, relying on the president’s popularity, highlighting only the benefits of the works, then making a show of asking those present if they’d like to receive those benefits or not.”

Caballero, who helped draft legal challenges to the contested megaprojects says the consultations did not meet consent and information requirements under the International Labor Organization’s Convention 169. He calls the government process an induced response. “What they’re basically seeking is to have the people back the president’s position.”

As for the legal challenge filed in Mexican district court and the complaint before the Inter-American Commission on Human Rights, Mayan land rights activist Pedro Uc Be is not optimistic. “Going to court is not our great hope, but unfortunately it’s become a necessary route,” he said. Uc Be notes Mexico’s legal system does not have a single judge who identifies as Indigenous on a bench.

“As Indigenous peoples, we end up without a means of defense, due to language barriers, to laws that don’t favor us, [and] to the lack of access to information about this situation,” he said. The current situation has highlighted, “…problems that aren’t new–that can be traced back more than 500 years–but that, with this government, have crystallized a bit more.”

Shannon Young is an independent journalist based in Oaxaca, Mexico. Follow her work and comments on Twitter at @SYoungReports.