Why Did Daniel Ortega Imprison His Former Comrades?

The detention of political opponents in the lead up to November presidential elections is the latest episode in the FSLN’s long-troubled relationship to democracy. 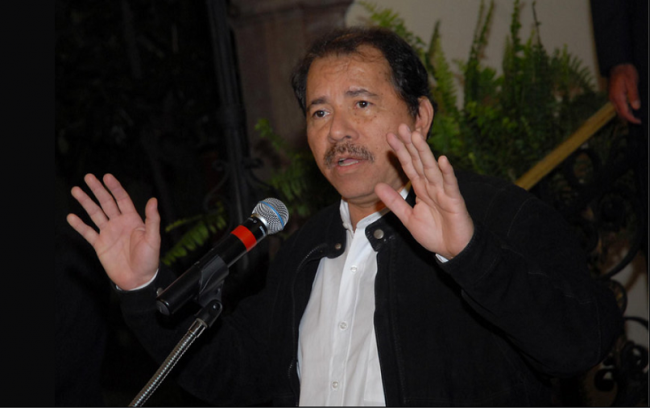 In the first 13 days of June 2021, Ortega ordered the arrests and raids at the homes of 13 members of the opposition, including several of his old comrades who were members of the FSLN. He then added three more targets to the list, linked to the business community. These detentions were surprising, but not shocking if we have in mind the problematic relationship between Ortega, the FSLN, and democracy.

The Frente Sandinista de Liberación Nacional (Sandinista National Liberation Front, FSLN) put Nicaragua in the world historic atlas. It first defeated one of the bloodiest dictatorships in Latin America and then led a process of socioeconomic transformation, which was received with justified enthusiasm in many parts of the world. The applause was so pluralistic that both East and West Germany joined in spirited support of the nascent Sandinista revolution. Thanks to this avant la letre ideological globalization, the small country, with only three million inhabitants in 1979, captured headlines in global newspapers.

The triumph over the Somoza dynasty was the result of an alliance between the guerrillas and elements of the intellectual class, business interests, and the Catholic Church. Despite their aspirations for systemic change, the Sandinistas were the only rebel group in the Isthmus—and perhaps in Latin America—to absorb a significant number of economic and cultural elites into its ranks.

This nexus with the traditional elite was in part possible because the Somoza group had created an independent clan, excluding the oligarchic clans. 1972, following the devastating earthquake that destroyed the capital, was a turning point, when the Somozas excluded other clans from the aid that flowed in from abroad. The assassination of Pedro Joaquín Chamorro, a member of the traditional elite and director of the main opposition newspaper, was the catalyst that the FSLN needed to stir the pot for a popular insurrection and consolidate the “Group of 12,” the notable elite who gave the impetus to the armed struggle and a counter to the Somoza argument that the FSLN was a band of terrorists.

But as soon as they took power, the nine commanders of the FSLN’s National Directorate governed behind the backs of their allies, marginalizing them, and breaking the national consensus that had been the source of their triumph. Luis Carrión, a member of the National Directorate, recognized it as such 40 years later. Some of these allies distanced themselves immediately and others, who in the 1970s and afterward had become Sandinista militants, held important posts in the new cabinet, with a submissive voice and without a vote of dissent.

They maintained a nearly-religious faith—and like all faiths, uncritical—in the revolutionary project. When they perceived autocratic practices, they justified them with the alibi that democracy was a luxury that the constant threat of an imperial invasion would not allow. There was both truth and falsity in this excuse: the U.S. government did finance the Contras, but never planned a direct intervention. After 40 years of dictatorship, democracy never found fertile ground in which to grow in Nicaragua.

In 1984, the FSLN called for, and won, elections. Their social program won votes, even though their reach in certain areas hinted at authoritarian: for example, the agrarian reform was very state-centric in the early years, allowing the best farming estates to end up in the hands of Sandinista leaders, instead of campesinos. With time, the war eroded the social base of the FSLN, which was never majoritarian, with the party’s leaders truly convinced that they represented the will of the majority of the people.

An opposition under siege defeated the FSLN in the 1990 elections. The ideological curtain was pulled away. There was an implosion within Sandinismo. The political and cultural elite, what remained of the old allies, and other militants separated and eventually rejected the hierarchical and intolerant methods of the FSLN, choosing instead a social democratic ideology. Among this sector, aspiration for democracy overtook the place that social transformation, self-determination, and empowerment for the marginalized had occupied.

A schism within the FSLN gave birth to the Movimiento Renovador Sandinista (Sandinista Renovation Movement, MRS). With time other leaders left the fold, worn out from trying time and again through electoral means to replace Daniel Ortega as the most visible face of the FSLN, its maximum commander, and its eternal presidential candidate. He has been all those things from 1979 to 2021, sending a clear signal of the party’s anti-democratic tendencies. In the 2006 elections, after 17 years out of presidential power, Ortega arrived with a handful of his unconditional supporters, among those only two of the nine members of the historic National Directorate.

Ortega did not want to govern with his old comrades in the struggle, and instead he entered alliances with big business, a right-wing party, and even members of the armed counterrevolution. This motley crew was called the Government of Reconciliation and National Unity. A series of loans from the Venezuelan government—on average almost $500 million a year—over a long period of time gave the appearance that his finances were growing, allowed him to exempt entrepreneurs from taxes, and make social investments. Ortega placated the interests of the United States in the region: his soldiers continued exchanges with Southern Command, his police was financed by the U.S. Drug Enforcement Administration (DEA), and his migration policy built a contention wall on Nicaragua’s southern border that was a part of the anti-immigrant, vertical border pushed by the U.S. government.

Businesspeople, politicians, ambassadors, and consultants applauded Ortega, the president of economic growth. None of them cared that Ortega was dismantling political institutions and building an autocracy on a small lake of petrodollars. His principal critics—the most consistent and convincing—were from the sector of Sandinismo for which democracy had become an unnegotiable tenant.

Ortega took advantage of those looking the other way to consolidate more power and perpetuate his domain: according to the Supreme Electoral Council, in 2006 he won the elections with 38 percent of the vote, in 2011 with 62 percent, and in 2016 with 72 percent. His project was consolidating.

That was until April 2018, when the Venezuelan pipeline ran out and the rent-based socialist model collided with a civic rebellion that began with the rejection of a reform to the social security law. The regime suffocated the protest movement with paramilitary groups led by veterans of the feared State Security forces of the 1980s, a political police created in the image of the Cubans. The brutal repression left around 400 dead, 2,000 injured, more than 1,600 political prisoners, and no less than 70,000 exiles. As a collateral impact of the repression, the FSLN lost much of its social support base, faced international sanctions, and was roundly criticized by international actors.

Many of the young people who protested on the streets were university students with Sandinista origins. They had been disputing the organizational hegemony of the FSLN for a decade and fighting against its vertical structure within higher education institutions. Without arrest warrants, many were kidnapped, subjected to rigged trials, and received disproportionate sentences. Some leaders of the campesino movement faced more than 200 years. The political prisoners suffered unspeakable torture that always had a single and powerful objective: to extract confessions that the MRS had organized revolt with funds from USAID and right-wing foundations.

Whether convinced by their own story or not, Ortega and his wife and vice president Rosario Murillo sought a justification for their excesses. They constructed and spread a narrative of a failed coup attempt to explain what happened in April 2018. Since then, reports, documentaries, and official declarations about the coup go along with new laws escalating the repression, restricting freedom of speech, reinstating lifetime sentences, and penalizing receiving international funds as a crime against national sovereignty. This panoply of laws justified, sometimes a posteriori, the cancellation of NGOs’ legal registration, and raids of important media outlets, whose property was robbed. The slogan appears to be: in the Cold War against imperialism, anything goes. The narrative, in effect, is a revival of old messages. The leftovers of the Cold War are served up, reheated.

The recent events in Nicaragua go along with this repressive drift: in the first 13 days of June 2021, four presidential candidates were detained, two former officials of the Violeta Barrios de Chamorro Foundation, a former president of the business union and six members of the MRS, all accused of "carrying out acts that undermine independence, sovereignty, and self-determination, inciting foreign interference in internal affairs, requesting military interventions, organizing with financing from foreign powers to carry out acts of terrorism and destabilization ... ”. These detentions and confinements were a qualitative leap in the repressive escalation. Members of the elites had not set foot in the prison since the murder of the first Somoza in 1956.

The MRS leaders in pre-trail detention are the political group hardest hit in this raid. It includes two revolutionary commanders—a former health minister and a retired general—a former vice chancellor, and a daughter and granddaughter of a former housing minister. Members of the 1980s government cabinet have been attacked in a purge reminiscent of Stalin, who deported and executed the leading cadres of the Soviet revolution. It is an outrageous irony that Ortega put former general Hugo Torres behind bars, who in 1974 participated in a Sandinista unity whose mission was to take Somoza hostages to exchange them for political prisoners, among them Daniel Ortega.

The confined leaders represent the democratizing sector of Sandinismo. This renewal proved to be impossible within the FSLN and had to seek an outlet in a party that abandoned the adjective "Sandinista" when, in 2021, it stopped calling itself MRS and was renamed the Unión Democrática Renovadora (Democratic Renovation Union, UNAMOS). To overcome these critics, Ortega appeals to the old values: sovereignty and self-determination. But it is only an excuse. The coup against the old MRS is due to multiple reasons, if we pay attention to the particular political idiosyncrasy of the ruling couple: UNAMOS is the party that eats into FSLN´s bases, several of its leaders have organizational experience, they are the ones who challenge the image of the FSLN as a left-wing party. They have spread the idea, among the FSLN bases, that a change in leadership is possible: the MRS has had five presidents in its 26 years of existence; the FSLN, only one since it came to power in 1979.

Born as a guerrilla organization, the FSLN as a political party has had a conflictive relationship with democracy. Since the 1980s, with the prohibition and confrontation of the “Nandaime va!” March, the party has shown a bitter intolerance whenever political rivals use public spaces and show their popular muscle. Now it uses the National Police and the Nicaraguan Army as political instruments. These forces were created as the Sandinista Police and the Sandinista Popular Army, they now maintain the adjective with invisible but indelible ink. They are the harshest and most enduring legacy of Sandinismo, and its most effective means of preventing democratic change. Following the trend of previous electoral statistics, with four candidates imprisoned and the senior leaders of the movement to democratize Sandinismo under arrest, it is possible that Ortega calculates winning with 82 percent of the vote in 2021.

José Luis Rocha is a Nicaraguan journalist, writer, and sociologist, and researcher for the magazine Envio (Managua, Nicaragua),