After the Eruption (Photo Essay)

“I am ashamed to say this, but according to our national budget laws, we can’t use a single cent [towards the volcano disaster relief].” These were Guatemalan President Jimmy Morales’ first public words as the magnitude of the damage after the June 3, 2018, Fuego Volcano eruption became evident.

Cell phone videos of people unsuccessfully attempting to outrun pyroclastic flows along the highway were becoming viral, yet accurate information was slow to unfold. Eventually it was confirmed: the village of San Miguel los Lotes, less than 15 miles from the UNESCO World Heritage site and tourist hot-spot of Antigua, had been erased off the map.

Earlier that morning, volcanologists from the National Institute for Seismology, Volcanology, Meteorology and Hydrology (INSIVUMEH), had registered and posted warnings of above normal activity within the Fuego volcano. The National Coordinator for the Reduction of Disasters (CONRED) dismissed the posts as nothing out of the ordinary since Fuego is one of the most active stratovolcanoes in the world.

Of course, the activity was anything but normal. Sometime before noon, staff at the five-star La Reunion Golf Resort, only a ravine away from San Miguel Los Lotes, began evacuation procedures. The manager would later reveal she received a tip from an anonymous source within a government agency to evacuate. All staff and guests were safely removed, yet the golf resort would eventually face the same fate as San Miguel Los Lotes.

As a miles-high ash cloud formed above Fuego Volcano, members of CONRED finally began to act shortly after lunchtime. CONRED personnel drove down National Highway 14, which at the time connected the highland town of Antigua with the commercial hub of Escuintla downhill towards the Pacific coast, and warned townspeople, including those from San Miguel los Lotes, to evacuate. By then it was too late.

The monstrous pyroclastic cloud furiously rushed down the eastern slopes of Fuego, demolishing San Miguel los Lotes, at one point even changing course southbound along National Highway 14 towards the larger town of El Rodeo. Most of the 200 homes in San Miguel los Lotes were buried under volcanic debris containing lava, rocks, ash and molten organic matter. Hundreds of locals and some first responders, including firefighters, paramedics, and members of CONRED, perished attempting to escape the pyroclastic flow, known to reach temperatures of up to 1,830 °F.

After the severity of the events became clear, the government announced a “State of Calamity,” opening funds for disaster relief, and placing Morales in an awkward situation given his previous pronouncements. Nevertheless, government-organized search and rescue teams only operated irregularly for the first two weeks. After that, the government suspended all activities and declared the entire zone a mass burial site.

Weeks after the event, the government continues to claim that official numbers hover around 200 people missing and slightly over 100 confirmed dead, even though it is clear San Miguel los Lotes had a population that at the very least exceeded 1,000 people.

Such lack of accountability has infuriated the general population and added insult to injury. Dozens of survivors have claimed to have lost entire extended families of up to 30 or 40 members—grandparents, cousins, children, siblings, in-laws, significant others—and believe the government is attempting to cover its ineptitude and keep the number of victims relatively low by declaring the zone unsafe and halting the search brigades.

It’s not the first natural disaster in Guatemala to have potentially political implications. After the 1976 earthquake killed thousands, the Guatemalan civil war escalated. Several progressive sectors within the population radicalized in response to the government’s lack of response and corruption—death squads have even been accused of disappearing people, taking advantage of the confusion and lack of specific information about victims.

It is unclear if the current crisis will lead to similar response. But Morales’ approval rating has continued to dip amid multiple scandals throughout his administration. Having run on an anti-corruption platform, Morales, who is Latin America’s highest paid head of state, has been accused of corruption twice by a United Nations taskforce. And the day after the June 3 eruption, Congress called for a vote to pass a blanket amnesty for irregular campaign funding for political parties—an act that directly implicates Morales and dozens of Members of Congress. Morales’ own FCN-Nación party has been under fire for illegal funding, and has since been disbanded.

Meanwhile, in San Miguel los Lotes, despite the government’s absence, survivors continue to search for their family members. Juan Ortiz, 63, stands desolate with his three dogs atop 12 to 15 feet of volcanic debris. “Underneath here was my son’s home,” he says. “I am hoping someone will bring a bulldozer and help me dig. I just want to try to find my son's remains so I can lay him to rest. He was with his wife and in-laws down there." 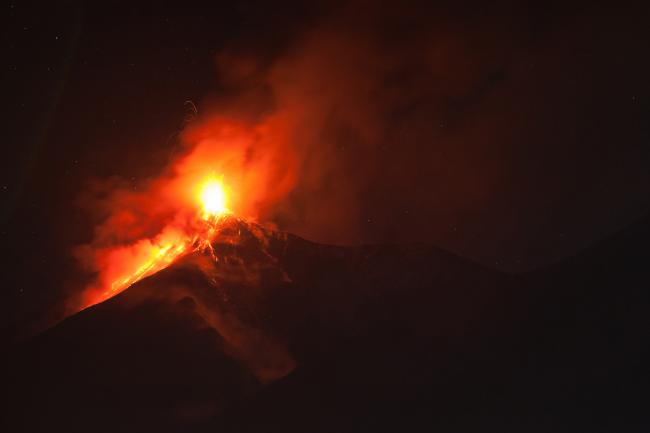 Fuego Volcano, one of the most active volcanoes in the World, erupts during a period of stronger-than-usual activity. Seen from Alotengango, Sacatepequez, Guatemala. February 9, 2016. 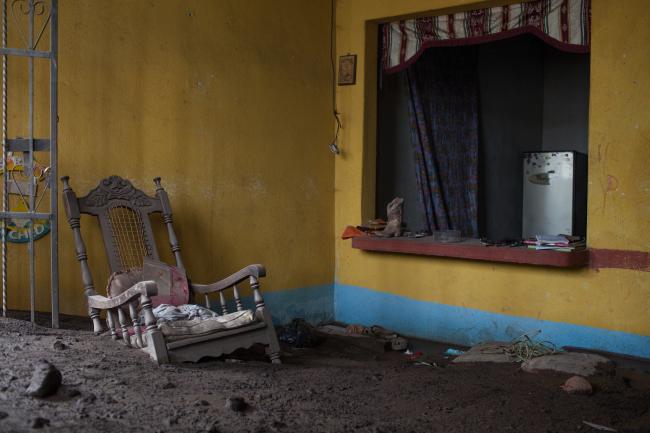 A rocking chair sits half-buried in volcanic debris inside a home in the evacuated community of El Barrio along National Highway 14, roughly one kilometer south of San Miguel los Lotes. A violent eruption by Fuego Volcano completely destroyed the community of San Miguel los Lotes on Sunday, June 3, 2018. As of now, over 110 victims have been identified, with at least 200 missing and thousands evacuated from neighboring villages. El Barrio, Escuintla, Guatemala. June 14, 2018. 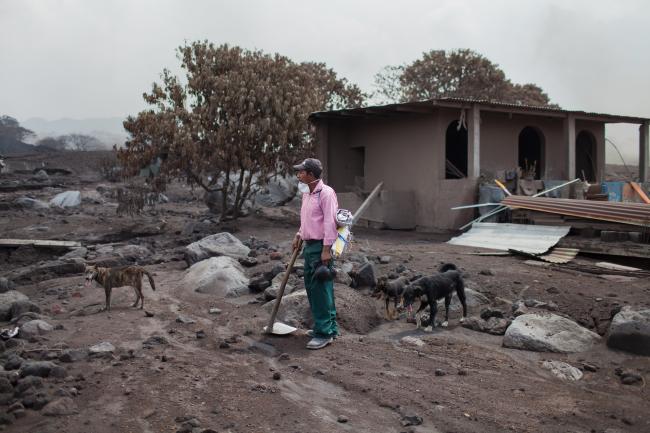 Juan Ortiz, 63, from El Barrio, stands over roughly 2 meters of volcanic debris along the former main thoroughfare of San Miguel los Lotes and in front of a house where only the second story can be seen as the rest remains completely buried. A violent eruption by Fuego Volcano completely destroyed the community on Sunday, June 3, 2018. Mr. Ortiz is hoping to recover the remains of his son Jesus Ezequiel Ortiz and other relatives whose home was completely buried under the volcanic debris. As of now, over 110 victims have been identified, with at least 200 missing and thousands evacuated from neighboring villages. San Miguel los Lotes, Escuintla, Guatemala. June 14, 2018. 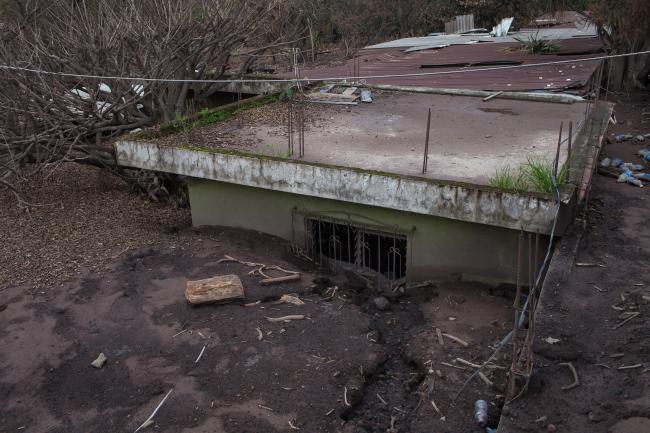 The top part of a home remains above ground after it was buried by volcanic debris in the community of San Miguel los Lotes. A violent eruption by Fuego Volcano completely destroyed the community on Sunday, June 3, 2018. As of now, over 110 victims have been identified, with at least 200 missing and thousands evacuated from neighboring villages. San Miguel los Lotes, Escuintla, Guatemala. June 14, 2018. 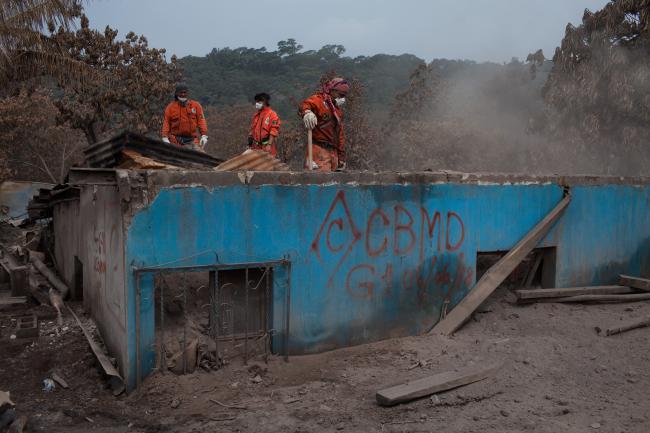 Members from the renowned “Topos” Mexican rescue team attempt to recover human remains by entering from the roof of a home buried in volcanic debris spewed by Fuego Volcano that completely destroyed the community of San Miguel los Lotes on Sunday, June 3, 2018. As of now, over 110 victims have been identified, with at least 200 missing and thousands evacuated from neighboring villages. San Miguel los Lotes, Escuintla, Guatemala. June 14, 2018. 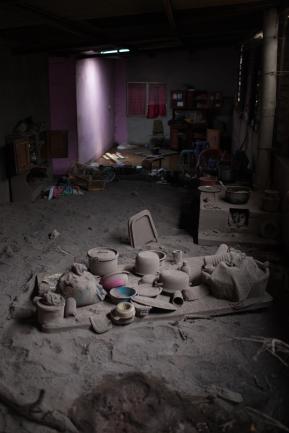 Kitchen utensils stand caked in ash over a dining table buried in volcanic debris inside a home in the community of San Miguel los Lotes. A violent eruption by Fuego Volcano completely destroyed the community on Sunday, June 3, 2018. As of now, over 110 victims have been identified, with at least 200 missing and thousands evacuated from neighboring villages. San Miguel los Lotes, Escuintla, Guatemala. June 14, 2018. 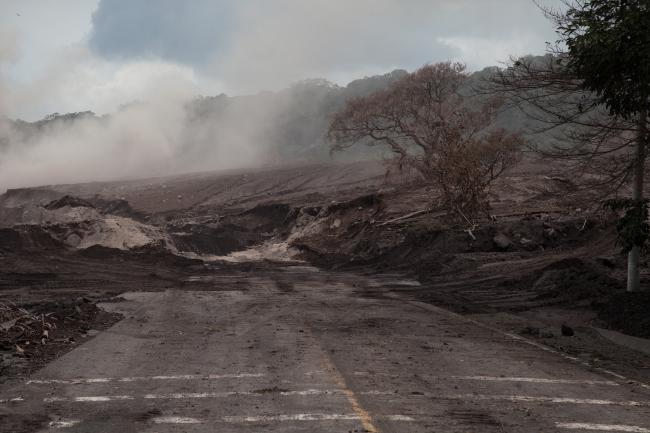 Roughly three meters of volcanic debris block access along National Route 14 near the former town of San Miguel los Lotes. A violent eruption by Fuego Volcano completely destroyed the community on Sunday, June 3, 2018. As of now, over 110 victims have been identified, with at least 200 missing and thousands evacuated from neighboring villages. San Miguel los Lotes, Escuintla, Guatemala. June 17, 2018. 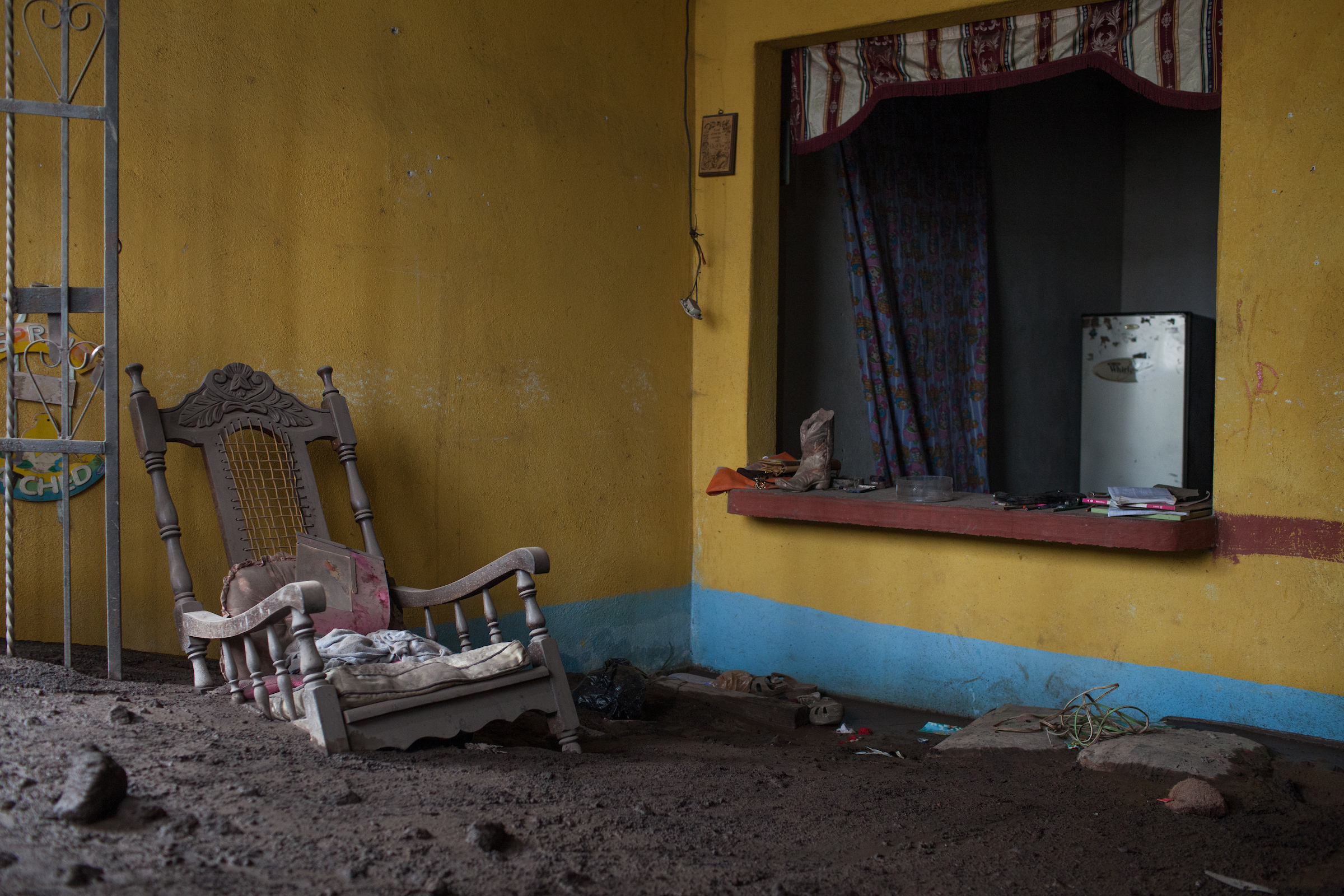