The International Commission Against Impunity in Guatemala (CICIG) has revealed $2 million in illegal campaign financing in the 2015 election of President Jimmy Morales. What will it mean for the country’s anti-corruption movement? 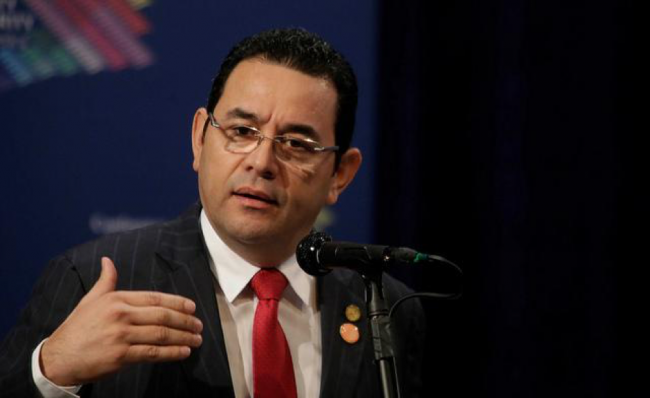 It appears increasingly likely that Guatemalan President Jimmy Morales will face prosecution for the alleged illegal financing of his 2015 campaign. On April 19, the Guatemalan Public Prosecutor’s office (MP) and the United Nations-backed anti-corruption body the International Commission Against Impunity in Guatemala (CICIG) held a press conference to publicize the results of its ongoing investigation into the 2015 presidential elections, which revealed that Morales’ National Convergence Front (FCN) party had received over 15 million Quetzales, or a little over $2 million dollars, in illicit contributions from the Guatemalan business community. Morales ran as a political outsider in 2015 on the FCN-Nación ticket.

The MP/CICIG investigation found that the illicit funding came from the eight wealthiest families in Guatemala, who oversee businesses in cement production, sugar cane production, banking, and other industries. Guatemalan law states that political parties must report donations to campaigns to the country’s Supreme Electoral Council (TSE). This in part is to make the elections more transparent, but anonymous contributions remain a common problem. The investigation is the first time a case of illegal campaign financing has been exposed by an official investigation in Guatemala.

Three FCN-Nación politicians and businessmen managed the payment deliveries, according to Iván Velásquez, the lead investigator of CICIG, and Thelma Aldana, Guatemala’s Attorney General. The investigation points to Morales’ team asking businessmen Rodrigo Arenas and Andrés Botrán to collude with FCN-Nación’s Edgar Ovalle Maldonado. Maldonado is a retired colonel and congressman who is considered a fugitive from the law after going into hiding to avoid charges for his participation in forced disappearances during Guatemala’s 36-year-long internal armed conflict. Initial testimony by Arenas and Botrán confirms that the president was aware of the illegal spending.

As Aldana said in the press conference announcing the investigation, the MP and CICIG’s focus on illicit campaign financing is part of their strategy to combat corruption in the political system, by eliminating “dark money” in the election system and thereby strengthening democracy. “[Illicit financing] is one of the principal causes of the system of corruption that has captured the Guatemalan state,” said Aldana in the press conference. “Furthermore, it has distorted the democratic model of our country.”

In response to the investigation, Aldana requested the dissolution of the FCN-Nación political party, which was founded in 2008 by retired Generals Jose Luis Quilo Ayuso and Luis Felipe Miranda Trejo. The party remains heavily influenced by the military today, with former Colonel Ovalle Maldonado serving as Morales’s right-hand man during the election. The administration has continually sought to support the Guatemalan armed forces, including attempting to return the yearly military parade for the Day of the Military on June 30 to the main streets of Guatemala City in spite of protests. Despite these efforts, the parade was held on a military base in Guatemala City in 2017.

Morales’ campaign in 2015 occurred as the country mobilized to protest the widespread corruption in the government of former president Otto Pérez Molina. The corruption scandal eventually led to the resignations of Pérez Molina, his Vice President Roxana Baldetti, as well as the majority of his ministers. Both the former president and his vice president are currently facing criminal prosecution of their part in the scandal.

As a candidate, Morales capitalized on popular dissatisfaction with the political order to boost his campaign—not unlike Donald Trump’s rise to popularity in the United States. Morales, an evangelical Christian and former comedian known for his problematic television portrayal of a campesino in blackface who accidentally becomes president, campaigned as a political outsider, promising voters that he was “neither corrupt nor a thief.”

For his part, Morales denied that he had accepted any funding from the business community. “This is a lie, this is misrepresentation of the facts,” Morales told the daily Guatemalan newspaper Prensa Libre. “This is a shame for Guatemala.”

During his 2015 campaign, Morales had signaled that he welcomed any investigation by the MP and CICIG into his administration. This appeared to be a shift from the position of FCN-Nación’s previous presidential candidate, Ricardo Sagastume, who stated in 2011 that he hoped to limit CICIG’s influence if elected. Morales’ tone changed following his inauguration into office in 2016, with his administration taking a hostile position towards the CICIG.

Since its founding in 2007, the CICIG has faced an uphill battle to root out corruption and impunity in Guatemala. It was not until the appointment of Ivan Velásquez as lead investigator in 2013 that the anti-corruption body began to make an impact. Most notable is the investigation into former president Pérez Molina, which began in 2014 and, combined with massive street protesters, resulted in his historic resignation. These events led many to believe that there was hope for a new political order rooted not in impunity, but transparency, in Guatemala.

These hopes will not be brought into fruition under Morales, who first came under fire for his position toward CICIG in September 2017, when he attempted to expel Velásquez, from the country. This led to a slew of protests in support of Velásquez and his investigation last fall.

The outcry increased further following a Nuestro Diario investigation into the Morales administration’s expenses. The investigation, published in January 2018, shows that Morales had made a number of extravagant purchases amounting to $47,297 in 2016 and 2017, including whiskey, sportswear, jewelry, flowers, and other luxury goods. Following public outcry, the Secretary of Administrative Affairs and Security of Guatemala announced that Morales had repaid about $15,500 of the expenses.

Following the revelations, representatives from the eight most powerful Guatemalan companies held a press conference on April 19 to ask forgiveness for their illegal contributions. “As Guatemalans, we are here facing up, assuming any responsibility and aware of the consequences of our personal decisions. We humbly acknowledge that mistakes were made and that they must be compensated,” Guatemalan businessman Salvador Paiz said.

Paulina Paiz Riera, a representative from the Guatemalan company Nova Servicios S.A., however, suggested that these companies’ financing of Morales campaign was a response to the criminal activity associated with previous administrations, specifically the illicit associations in the administration of Otto Pérez Molina. The business community viewed Morales as being more morally sound than his predecessor.

All too often such actions have meant that business and organized criminal networks can elect administrations sympathetic to their interests into power. In turn, these powerful business interests maintain their economic position. “There is nothing new in the case presented by CICIG, in terms of a revelation of a case of illicit financing…historically, that has happened for decades,” said Luis Solano, a Guatemalan investigator and researcher. “The new thing is that at last the framework of this financing has been exposed. It shows that economic elites participate, and that this will have a legal consequence.”

Investigations by the MP and CICIG previously uncovered illegal financing of other parties in the 2015 election, specifically for the National Unity of Hope (UNE) and Renewed Democratic Liberty Party (LIDER) parties. LIDER was removed from the national electoral council registry in 2016 due to violations of electoral law.

Mario Polanco, the director of the human rights organization Grupo del Apoyo Mutuo (GAM) in Guatemala City, points out that the recent revelations have caused irreparable damage to the Morales administration. “The people of Guatemala are no longer respecting [Morales] as president,” he said.

Social movements too have mobilized once again to protest the embattled president. On April 21, groups carried out demonstrations in Guatemala’s Central Plaza to demand Morales’ resignation. The protests were relatively small compared to the mobilizations in 2015, with only about 100 people gathering in the plaza. The 2015 protests against Pérez Molina regularly drew as many as 30,000 people to the plaza to demand his resignation. Days after the recent protest, on April 24, thousands of campesinos associated with the Comité de Desarollo Campesino (CODECA) marched through Guatemala City, again demanding the resignation of the president.

Critics of CICIG in Guatemala have found unlikely support from the United States, which has funded the body since it was founded in 2007. On May 4, Florida Senator Marco Rubio announced that he was seeking to block the $6 million of State Department funding allocated to CICIG over concerns that anti-corruption body was being manipulated by foreign interests.

“I am concerned that CICIG, a commission mostly funded by the United States, has been manipulated and used by radical elements and Russia’s campaign against the Bitkov family in Guatemala,” Rubio said in a statement. “CICIG was established by the United Nations and Guatemala to prosecute official corruption and human rights abuses, not to participate in it.”

Specifically, he suggested that the CICIG is being used by the Russians to persecute the Bitkov family, who fled Russia, fearing repression from the government. They were arrested in Guatemala and sentenced to prison for participating in the purchase of fraudulent passports in 2015. The family claims to be under attack. Yet as Rachel Schwartz points out in The Washington Post, there is no proven connection between the Russians and CICIG.

Meanwhile, Morales and his allies have sought to undermine the MP and CICIG. Following to announcement of the investigation into illicit financing of FCN-Nación, Morales accused the MP and CICIG of “abuse of authority” and of “illegally searching” the presidential palace in 2016. The FCN-Nación has asked various sectors of the population to support the embattled president. On May 2, hundreds of workers from the Guatemala City market marched in favor of the president.

As CICIG and the MP continue their investigations, Morales has selected Maria Consuelo Porras Argueta, a former supreme court judge, to replace Aldana as Guatemala's Attorney General, whose term ends in May 2018. Critics worry that Porras will end the investigations into the president, but Porras has assured the country she will be an “independent and impartial” prosecutor.

“There is an environment of political instability with a tendency to worsen,” explained Solano, the Guatemalan investigator. Solano suggested that renewed attempts to expel Velásquez or even a coup d’état to maintain the corrupt system stand within the realm of possibility.

“The CICIG and MP did an investigation, a very independent and serious investigation,” Polanco said. “But the investigation has brought together the dark forces to form the war against the struggle against impunity and corruption.”

Jeff Abbott is an independent journalist currently based out of Guatemala. His work has appeared at The Progressive, In These Times, and Truthout. Follow him on Twitter @palabrasdeabajo.