The unprecedented success of Guatemala's anti-corruption protests surprised everyone. But this success has not yet translated to the ballot box. 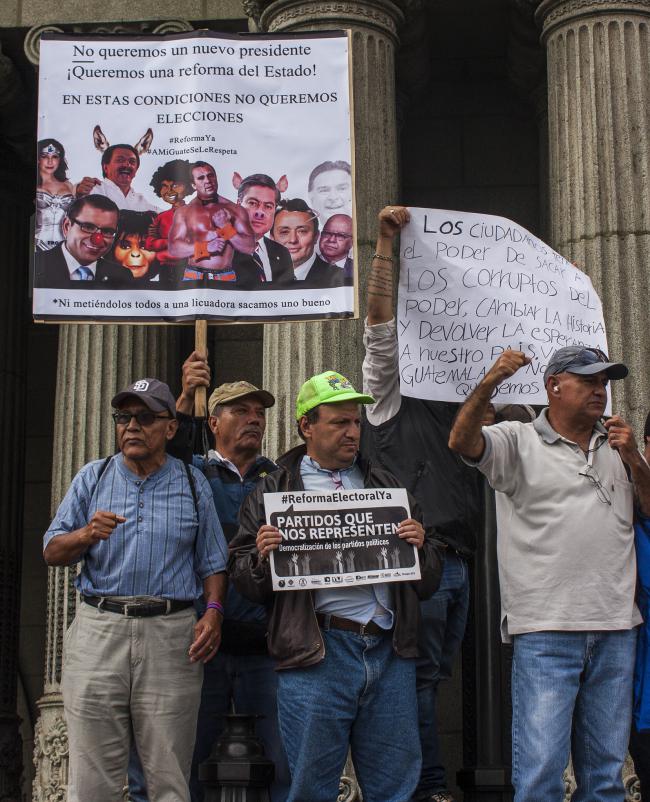 Jimmy Morales was not supposed to become the next president of Guatemala. The problem wasn’t that he was a television comedian, nor that he lacked a real program, nor that he refused to apologize for performing in blackface, nor even that journalists had turned up ever-clearer links between him and the right-wing former military officers who orchestrated the 1981-83 genocide in Guatemala. It simply wasn’t his turn.

After the peace accords were signed in 1996, ending a hellish 36-year civil war, a political pattern was established in Guatemala: whichever candidate lost a runoff election went on to win the presidency in the following election. Social-democrat Álvaro Colom came in second in 2003 and won in 2007. Retired general Otto Pérez Molina came in second in 2007, so it was his turn to win in 2011. Pérez Molina had defeated a politician and businessman named Manuel Baldizón, candidate of the right-wing Líder party, in 2011.  Baldizón’s 2015 slogan, “te toca Guatemala” (“it’s your turn, Guatemala”), was widely interpreted to point out that it was Baldizón’s turn to be president. In August, shortly before the first-round elections, Baldizón was the clear frontrunner. He outspent other candidates by huge measures, exceeding legal caps on campaign spending. Posters of his face were everywhere, especially in the countryside. Whole towns were painted “Líder” red.

But Guatemalan politics had shifted in a way that no one expected. On April 16, 2015, a United Nations-sponsored anti-impunity commission, The Commission Against Impunity in Guatemala (CICIG), revealed an enormous corruption ring. The scandal was called “La Línea,” after a certain phone line importers knew to call to negotiate reduced duties. For this service, customs officials took kickbacks to the tune of $14.5 million. The scheme was connected right away to then vice-president Roxana Baldetti. Although Guatemalans are accustomed to corruption, the scale of this scheme was unprecedented. So too was the country’s response.

A middle-aged Guatemalan woman named Lucía Mendizábal was fed up living in a country where corruption literally kills. State hospitals go without medicine, and children die daily of malnutrition. Her friends were already talking about protesting by “votando en blanco,” submitting blank votes during the upcoming elections. As Mendizábal told Radio Ambulante, she posted a message on Facebook: “Instead of talking about refusing to vote, how about if everyone who is talking about casting a blank ballot, goes out to protest instead.” She expected about fifty people to respond. On April 25, more than 30,000 people showed up in front of the Palacio Nacional to protest. With the rallying cry “renuncia ya” (“resign now”), the protestors demanded that vice president Baldetti step down. In May, Baldetti submitted to the protestors’ demands. Two months later, the former vice president was arrested.

The success of the protests surprised everyone, the protestors most of all. Soon demonstrators were calling on President Otto Pérez Molina to step down, too. During the recent civil war, student leaders and union organizers had been gunned down or disappeared in the street for much less. Many had bravely continued organizing, but mass protests had been unthinkable. And yet here the protesters were, on the streets in huge numbers, toting along their kids to demonstrations and carrying signs calling for “less fear.” What started as a mostly middle-class urban protest spread quickly. Women’s groups were on the scene, as were religious groups. A contingent of peasant organizers from Panzós, a village where a massacre in 1978 accelerated the violence of Guatemala's brutal civil war, arrived at the Palacio Nacional to protest as well. Most surprising, Guatemala’s powerful chamber of commerce, CACIF, also threw its support behind the protests. On August 27, a general strike was called and more than 100,000 people took to the streets across Guatemala to call for the president’s resignation. It was by far the largest mass political demonstration in Guatemalan history.

Meanwhile, parallel protests started cropping up at Baldizón’s campaign stops. Protesters showed up to his rallies to shout him down with cries of “No te toca! No te toca!” (It’s not your turn! It’s not your turn!) Guatemalans are devoted social media users, and the hashtag #NoTeTocaBaldizon began bouncing around Twitter. Baldizón was a well-known ally of the sitting president, and his vice presidential candidate was already under investigation for corruption before the election. Political scientist Phillip Chicola described Baldizón and his party as “prodigal sons” of the same corrupt system that had brought Guatemalans to the street to protest.

In September, right before the first-round elections, CICIG produced tapes of telephone conversations that directly linked Otto Pérez Molina to the customs fraud scandal. When conspirators talked about “number one” and “number two” in charge of the scheme, they were allegedly referring to Pérez Molina and Baldetti.  In a surreal 24-hour sequence, Congress voted to remove Pérez Molina’s immunity and the country’s attorney general enforced a travel ban to prevent him from fleeing the country to avoid prosecution. By midnight Pérez Molina had resigned; he was arrested and taken to jail one day later. Journalist Francisco Goldman wrote about the street party that ensued: “This, I thought as I watched, was the harsh, raw joy of a people long silenced by decades of fear.”

For a few days, the election seemed beside the point. But then Guatemala experienced what a friend here described to me as a “civil hangover.” People complained that “no hay por quién votar” (“there is no one to vote for”). Candidacies had all been determined before the protest movement took off. There was a renewed campaign for casting blank votes. Some called for elections to be delayed and the whole election process to be reformed. But the first round went forward and it was clear that the protest movement had made its mark: when first-round balloting had ended, Manuel Baldizón came in third place. He would not pass through to the runoff election.

Left in the race, then, were a former first lady and a clown, known to most Guatemalans simply as Sandra and Jimmy. In 2011, left-leaning Sandra Torres Colom had divorced her husband, Álvaro Colom. Sandra said she did it for “love of Guatemala,” i.e. to sidestep rules preventing family members of former presidents from running for president. Her husband, president from 2008 to 2012, expanded social programs and helped to lift the poor —particularly in rural areas—out of dire poverty. Sandra oversaw many of her husband’s social programs. Though she was never charged with wrongdoing, her sister Gloria Torres, who also worked in the Colom administration, was charged in 2011 with stealing and laundering government funds. In the weeks leading up to the run-off, what I heard over and over from Guatemalans was that Sandra, too, was a “thief.” Any association with past corruption was enough to sink a candidate in the context of the protest movement.

That left Jimmy. His slogan was simple: “Neither corrupt nor a thief.” He had no political experience, but suddenly this seemed to be his strongest asset. When asked about his plans for governing, Jimmy had few concrete answers other than that he would fight corruption. But there was the matter of his backers. Jimmy’s party, FCN-Nación, was founded in 2004 by retired military generals, in part to assure military privileges would be retained after the signing of the peace accords. Among the generals was Edgar Justino Ovalle Maldonado, who, according to declassified documents obtained by the National Security Archive in Washington D.C., was in charge of operations in the Ixil region from September 1981 through 1982, a period during which some of the worst massacres of the Guatemalan civil war were committed. Ovalle Maldonado later served as chief intelligence officer at the military base at Cobán in 1983—another massacre site.

Chatting to a young man with a ponytail after a literary reading in Guatemala City in September, I asked who he might vote for in the runoff. He looked at me like I had three heads. Sandra, of course, he replied, citing Jimmy’s military connections and saying there were some things that, as a Guatemalan, he could never forgive. In the end, however, this was a minority opinion. By positioning himself as an outsider candidate, Jimmy won in a landslide, taking 67.4 percent of the vote.

Despite the result, the Guatemalan elections ended with a partial return to the kind of protest envisioned before people took to the streets last spring. Though the protest movement boosted Morales, it also boosted blank votes and absenteeism. When the final voting numbers were tabulated, blank and null votes exceeded four percent of the total tally. The Guatemalan newspaper Prensa Libre posted a photo gallery of ballots with candidates X-ed out and the word “corrupt” written across their faces. Other voters scrawled “ridiculous,” “thief,” and “assassin” on their ballots.

Many Guatemalans simply stayed home on election day. In the end, more eligible Guatemalans didn’t vote at all than voted for Jimmy Morales. Only 55% voted. Abstention rates— whether motivated by apathy, or to protest a system perceived as illegitimate, or because many registered voters are living in the U.S. where no absentee ballots are available— were even higher than usual.

Despite rumors that the blank-vote and no-vote movements originated as a plot by Baldizón, and criticisms that such a strategy was no way forward, the push continued strong up until the day of the runoff election. “Tu dignidad no se vota” signs calling for people to cast blank ballots are still tacked up on walls all around Guatemala City. The phrase means, roughly, “Don’t vote away your dignity.”

Rachel Nolan is a doctoral candidate in Latin American and Caribbean History at New York University and 2015-2016 Fulbright scholar in Guatemala.