Political polarization, demonstrations of power by armed groups, security threats, and false alarms as campaigns close a week before polls. 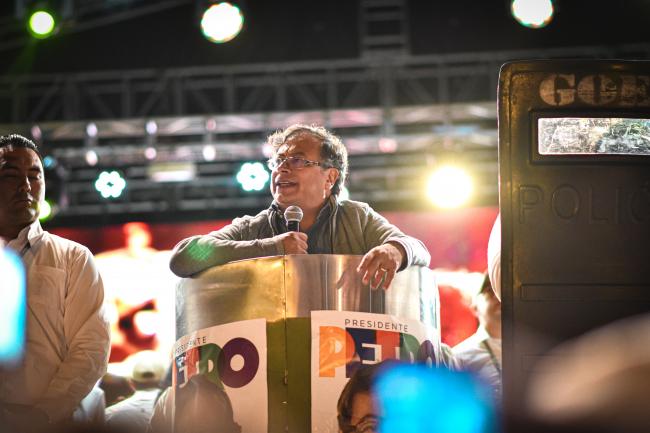 In Bogotá on Sunday night, Francia Márquez gave her closing speech from behind security guards with armored shields. At a campaign event the night before, the Afro-Colombian environmental activist running as vice president in leftist Gustavo Petro’s election campaign fled the stage when a laser dot appeared on her face. Her security detail, fearing an attempt on her life, rushed her away mid-speech and evacuated her from the area.

The next day, an 18-year-old student turned himself into the police, saying he was the one responsible and he “didn’t realize the consequences his actions would bring.”

The perceived threat, luckily, turned out to be a false alarm. But the reaction of Márquez’s security team illustrates how tense this election season has become. Colombians head to the polls Sunday, May 29 for the first round of presidential elections. Assuming no one in the crowded field gets more than 50 percent of the vote, the two candidates with the most votes will head to a runoff at the end of June.

Petro, Márquez, and right-wing candidate Federico Gutiérrez have all received credible death threats. Just a few weeks ago, Colombia’s most powerful criminal armed group, the Gaitanista Self-Defense Forces (AGC), shut down nearly a fourth of the country in an “armed strike” that left businesses shuttered and thousands trapped in their homes.

Colombia’s Public Defender's Office warned in an announcement on May 19 that 290 municipalities are “at extreme risk” of election-related violence ahead of the polls, and over 1,000 more at “high risk,” principally in regions controlled by AGC and leftist rebel group the National Liberation Army (ELN).

Petro, who currently leads the polls by double digits, is widely viewed as a threat to the status-quo, and some of his supporters fear that his increasingly desperate opponents may resort to illegal or unethical measures to prevent his victory. Colombia has never had a leftist president. Although the names of parties have changed over time, the country has always been ruled by right-wing parties supported by wealthy elites.

Ex-president Álvaro Uribe, who still holds considerable political capital among Colombia’s right wing, made unsubstantiated claims of election fraud during legislative elections in April. His party suffered heavy losses after the slower official count found thousands of votes that had not been counted in the “flash tally” for Petro’s Pacto Histórico (Historic Pact) coalition.

He has since signaled publicly that the only way Petro could win a general election is by cheating, leading some observers to worry he might not respect an election that results in a left-wing president.

Petro has run on a campaign promising to create social programs designed to address Colombia’s high inequality rate, reimplement the 2016 peace deal with the Revolutionary Armed Forces of Colombia (FARC)—which has seen considerable procedural delays and stonewalling under current president Iván Duque—and invest in clean energy, moving Colombia away from a hydrocarbon and extraction economy. 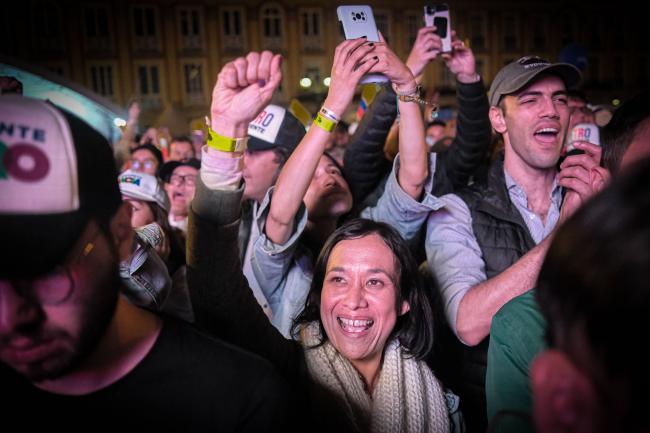 His campaign received a considerable boost when Márquez joined the ticket. The widely respected vice-presidential candidate brings with her a large coalition of activist and social groups who are generally distrustful of the “establishment politics” that Petro represents.

“I don’t have any faith in our political system,” said Marilyn Machado, a sociologist and human rights activist in Norte de Cauca and longtime colleague of Márquez. “But I have faith in Francia. Her victories are our victories. And most importantly, she is a powerful symbol—a Black woman who has escaped the cycles of poverty society has forced so many of us into.”

President Duque’s party, Centro Democrático (CD), is facing historic disapproval ratings over economic woes, rising violence in rural areas, and a bloody police crackdown on massive protests in 2021. Duque is prevented by the Colombian constitution from running for a second term. CD has not bothered to field a candidate, instead informally endorsing right-wing candidate Federico Gutiérrez, whose campaign largely endorses CD policy.

Dark horse candidate Rodolfo Hernandez, ex-mayor of Bucaramanga and a construction company magnate who has been called the “Trump of the Tropics” by critics and supporters alike, has shaken up the race in recent weeks, erasing a once-considerable deficit. He now trails Gutiérrez by just a few points. Analysts say he stands a real chance of making the runoff. Hernandez is running an ostensibly right wing anti-corruption campaign, but some of his policy proposals do not fit neatly into a left-right spectrum. He has been criticized for making xenophobic comments against Venezuelan migrants, saying they bring sexual diseases and poverty to Colombia.

Petro currently leads the polls by double digits, but opposition sentiment, which is currently divided among several candidates, is expected to coalesce around whoever makes it to the second round of voting. Although polling a month away in a country as unpredictable as Colombia may prove unreliable, most voter surveys predict a close race.

Whoever wins the second round in June will take office without a coalition majority in the legislature. They will also face economic and budget woes stemming from a Covid-induced recession, a flagging peace accord, and an increasingly politically polarized public.

On Sunday night, campaigns held their closing events in Bogotá before a mandated pause in the week before polls open. Support for Petro is strong in the capital, and supporters leaving the Márquez event were confident.

“To me the idea a progressive could win in Colombia fills me with hope,” said María Torres, who wore a Márquez t-shirt and carried a sign calling for peace. “I just wish Francia was at the top of the ballot. She is the president I want.”